Attending a Carnegie Hall concert is a quintessential New York experience, but like many things in the city, the Hall’s roots were planted in foreign soil—specifically in Dunfermline, the ancient capital of Scotland and the birthplace of Andrew Carnegie. 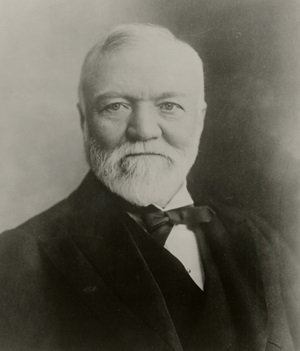 Carnegie, a Scot, embodied the classic rags-to-riches American story. He was born in 1835 in Dunfermline, a town known for its home-woven materials that fell into difficult times with the advent of industrial weaving mills.

Carnegie’s generous spirit as a philanthropist was likely influenced by his father and maternal grandfather, Thomas Morrison, who was a shoemaker and political reformer. Morrison, along with Andrew’s father, Will, joined the Chartists. This working-class movement fought for parliamentary reform and rights for laborers. When the movement died out in 1848, the Carnegies sold their possessions to pay for passage to America.

The family traveled to Glasgow, where they boarded the SV Wiscasset on June 28 for the trip across the Atlantic. They arrived in New York City on August 14 and made their way to Allegheny, Pennsylvania, an industrial city that was eventually swallowed up by Pittsburgh. Over the years, the enterprising young Andrew worked his way from lowly “bobbin boy” in a Pittsburgh steel mill to amass one of the great fortunes in American history.

Another Atlantic crossing, nearly 40 years after Andrew Carnegie arrived in America, figures prominently in the history of Carnegie Hall: the honeymoon voyage Andrew took back to Scotland with his bride, Louise, and their onboard encounter with the young conductor Walter Damrosch. The Carnegies invited Damrosch to visit them in Scotland, and the conductor shared a vision for a concert hall that Andrew agreed to fund. For 125 years, that concert hall has been the destination of excellence, and, as Carnegie said at its dedication, “is built to stand for ages, and during these ages it is probable that this Hall will intertwine itself with the history of our country.” And it all started in Dunfermline, Scotland.