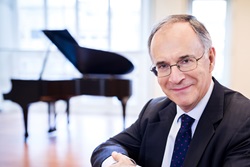 Clive Gillinson became Executive and Artistic Director of Carnegie Hall in July 2005, having been appointed the previous season. He is responsible for developing the artistic concepts for Carnegie Hall presentations in its three halls—the celebrated Stern Auditorium/Perelman Stage (cap. 2804), innovative Zankel Hall (cap. 600), and intimate Weill Recital Hall (cap. 268)—representing approximately 170 performances each season, ranging from orchestral concerts, chamber music, solo recitals, to jazz, world, and popular music. He also oversees the management of all aspects of the world-renowned venue, including strategic and artistic planning, resource development, education, finance, and administration and operations for the Weill Music Institute which taps the resources of Carnegie Hall to bring music education and community programs to roughly 600,000 people in the New York City metropolitan region, across the United States, and around the world each season.

Since his arrival in New York, Mr. Gillinson has worked to build upon the quality, creativity, diversity, and extraordinary history for which Carnegie Hall is known worldwide. Under his leadership, Carnegie Hall has embarked upon many bold new directions in its concert and education programming, including augmenting and integrating current offerings to create large-scale citywide festivals. The festivals use the full range of the Hall’s artistic and educational resources to take audiences on musical journeys of discovery that extend beyond single performances and concert series. Carnegie Hall’s first major international festival, Berlin in Lights, was presented in November 2007, exploring the vibrant city that is Berlin today. It was followed by two city-wide festivals examining the dynamic culture and distinctive history of American music—Bernstein: The Best of All Possible Worlds in fall 2008 and Honor! A Celebration of the African American Cultural Legacy in spring 2009. Ancient Paths, Modern Voices, exploring Chinese music and culture took place in fall 2009. These were followed by JapanNYC, an ambitious two-part festival in December 2010 and spring 2011; Voices from Latin America in November/December 2012; Vienna: City of Dreams featuring the Vienna Philharmonic Orchestra and Vienna State Opera in February/March 2014; and Ubuntu: Music and Arts of South Africa in October/November 2014.

As a demonstration of his strong belief that the arts should be central to society and accessible to all, Mr. Gillinson also conceptualized and helped implement Ensemble Connect—a program of Carnegie Hall, The Juilliard School, and the Weill Music Institute in partnership with the New York City Department of Education. Established in 2007, Ensemble Connect is an innovative fellowship program for the finest US-based post-graduate musicians. Designed to help bridge the gap between their academic and professional lives, the two-year program provides the best young professional musicians with top quality performance opportunities, advanced musical training, and intensive teaching instruction and hands-on experience working in New York City public schools.

Most recently, Carnegie Hall launched a new major initiative for young musicians. The National Youth Orchestra of the United States of America is a free program that invites the finest players, ages 16–19, from all across the country to gather with their peers, a faculty of leading orchestral musicians, and a different celebrated conductor and soloist each year for a two-week, intensive summer residency followed by an exciting tour. The first NYO-USA tour in summer 2013, in which every concert sold out, began at the Kennedy Center in Washington DC, continued on to St. Petersburg and Moscow, and finished with a concert at the BBC Proms in London. The NYO-USA toured the USA in summer 2014, introducing America to its own youth orchestra, performed across China in summer 2015, and toured Europe in summer 2016. In summer 2016, Carnegie Hall also expanded on NYO-USA to launch NYO2, a free program for outstanding younger musicians, ages 14–17, with a particular focus on attracting talented students from communities traditionally underserved and underrepresented in the classical orchestral field.

Clive Gillinson was born in Bangalore, India, in 1946; his mother was a professional cellist and his father, a businessman, also wrote and painted. Mr. Gillinson began studying the cello at the age of eleven and played in the National Youth Orchestra of Great Britain. He went to London University to study mathematics, but realizing that he wanted to make music his life, entered the Royal Academy of Music, where he gained a Recital Diploma and won the top cello prize. After attending the Royal Academy of Music, Mr. Gillinson became a member of the Philharmonia Orchestra.

Mr. Gillinson joined the London Symphony Orchestra cello section in 1970 and was elected to the Board of Directors of the self-governing orchestra in 1976, also serving as Finance Director. In 1984 he was asked by the Board to become Managing Director of the LSO, a position he held until becoming the Executive and Artistic Director of Carnegie Hall in 2005.

Under Mr. Gillinson’s leadership, the LSO initiated some of that city’s most innovative and successful artistic festivals, working with many of today's leading artists. In the international touring arena, the LSO established an annual residency in New York from 1997 and was a founding partner in the Pacific Music Festival in Sapporo, Japan, in 1990, with Leonard Bernstein and Michael Tilson Thomas. Mr. Gillinson believes in taking great music to society at large. In this area, his initiatives with the London Symphony Orchestra included the development of the LSO Discovery music education program, reaching over 30,000 people of all ages annually; and the creation of LSO St. Luke’s, the UBS and LSO Music Education Center, which involved the restoration and reconstruction of St. Luke’s, a magnificent, but previously derelict 18th-century church. Mr. Gillinson also created LSO Live, the orchestra's award-winning international CD label.

Mr. Gillinson has served as Chairman of the Association of British Orchestras; was one of the founding Trustees of the National Endowment for Science, Technology and the Arts; and was founding Chairman of the Management Committee of the Clore Leadership Programme. He was awarded the CBE (Commander of the British Empire) in the 1999 New Year Honours List and received the 2004 Making Music Sir Charles Grove Prize for his outstanding contribution to British music. Mr. Gillinson was appointed Knight Bachelor in the Queen's Birthday Honours List 2005, the only orchestra manager ever to be honored with a Knighthood.

Mr. Gillinson received an Honorary Doctorate from the Curtis Institute in Philadelphia in May 2007. In May 2010, he received an Honorary Doctor of Humane Letters from Skidmore College and was recipient of the Eastman School of Music’s Luminary Award. In 2011 and 2015, he served on the cello jury of the International Tchaikovsky Competition. He received the 2012 International Citation of Merit at the New York 2012 ISPA (International Society for the Performing Arts) Congress. In 2012, Mr. Gillinson was invited to become a Visiting Fellow at St. Catherine’s College, Oxford University. Mr. Gillinson is also an Honorary Fellow of the Guildhall School (HonFGS) and serves on the Honorary Board of Brubeck Institute of the University of the Pacific. In recognition of Carnegie Hall’s successful Vienna: City of Dreams festival and continued close collaboration with the Vienna Philharmonic Orchestra, the Austrian government honored Mr. Gillinson by bestowing upon him its prestigious Grand Decoration of Honor in Silver for services to the Republic of Austria. In addition, he received the Theodore S. Kesselman Award from the New York Youth Symphony in October 2014, and The Orchestra of St. Luke’s Gift of Music Award in spring 2015. He is a member of the Advisory Board of the new master’s degree program at the New York Institute of Technology. Titled, Leadership in the Arts & Entertainment Industry (LAEI), the program is designed to prepare future leaders in the arts and entertainment industry.

Mr. Gillinson recently co-authored a book, Better to Speak of It, published by Arch Street Press in October 2016. Centered on core management and personal values, the book offers specific, first-hand experiences from Mr. Gillinson and many leaders within key cultural, educational, nonprofit and corporate fields, appealing to readers ranging from nonprofit managers, arts-administration students, and the public interested in the health and well-being of the arts, as well as corporate executives and staffs seeking insight into how creativity can be applied with substantial results.