Program Includes Gershwin and Liszt, Plus Songs, Arias, and Duets from Opera and Musical Theater by Vocal Superstars Renée Fleming and Audra McDonald

Concert to be Heard by Listeners Nationwide via Carnegie Hall Live with WQXR 105.9 FM and WQXR.org 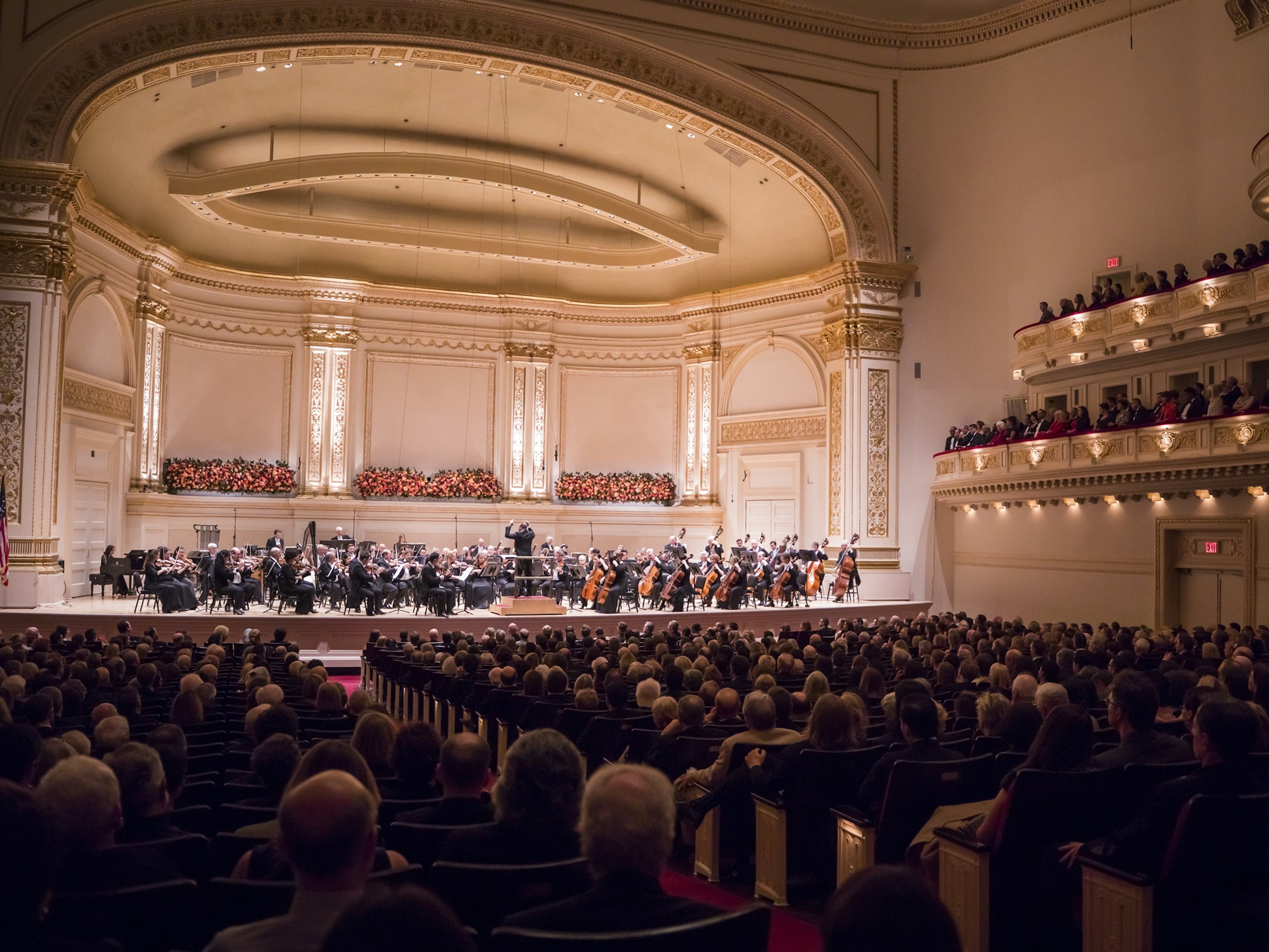 (New York, NY, September 6, 2018)—Carnegie Hall launches its 2018–2019 season on Wednesday, October 3 at 7:00 p.m. with a festive Opening Night Gala concert by the San Francisco Symphony under the baton of Music Director Michael Tilson Thomas, with a program to include Gershwin’s Cuban Overtureand An American in Paris as well as Liszt’s Mephisto Waltz No. 1. Mr. Tilson Thomas and the orchestra will be joined on this celebratory occasion by renowned vocalists Renée Flemingand Audra McDonald offering vocal selections by Gershwin, Rodgers, Villa-Lobos, Stephen Sondheim, and others.

The Opening Night performance will be heard by listeners around the world, kicking off the eighth annual Carnegie Hall Live broadcast and digital series with a live radio broadcast on WQXR 105.9 FM in New York and online at wqxr.org and carnegiehall.org/wqxr. Produced by WQXR and Carnegie Hall and co-hosted by WQXR’s Jeff Spurgeon and Clemency Burton-Hill, select Carnegie Hall Live broadcasts featured throughout the season include special digital access to the broadcast team, from backstage and in the control room, connecting national and international fans to the music and to each other.


About Michael Tilson Thomas and the San Francisco Symphony

Conductor, composer, and educator Michael Tilson Thomas curates his second Perspectives series at Carnegie Hall during the 2018–2019 season, leading four orchestras over seven concerts that reflect his multifaceted career and commitment to shaping the future of classical music. The series features music by composers he has long championed, as well of his own recent compositions, performed by artists with whom he frequently collaborates. Mr. Tilson Thomas kicked off his Perspectives in July 2018, when he led the National Youth Orchestra of the United States of America in Stern Auditorium / Perelman Stage as well as on its five-city tour to Asia, joined by pianist Jean-Yves Thibaudet.

After these October concerts with the San Francisco Symphony, Tilson Thomas returns in March for two concerts with the Vienna Philharmonic Orchestra, including performances of works by Ives and Mahler—composers for whom he has a special affinity (March 5-6, 2019). His Perspectives series culminates in May with two performances with the New World Symphony, the orchestral academy he co-founded to prepare the most gifted graduates of America’s conservatories for leadership roles in professional orchestras and ensembles. Both concerts feature fellow Carnegie Hall Perspectives artist and longtime colleague and friend, pianist Yuja Wang. Wang is soloist for Prokofiev’s Piano Concerto No. 5 on the first program which also includes the New York premiere of a new work by Julia Wolfe, co-commissioned by Carnegie Hall, and Berlioz’s Symphony fantastique (May 1, 2019). The following evening in Zankel Hall, Ms. Wang plays a work for solo piano written by Mr. Tilson Thomas. Also on the program is the New York premiere of Tilson Thomas’s Four Preludes on Playthings of the Wind, written for and featuring soprano Measha Brueggergosman (May 2, 2019).

Michael Tilson Thomas made his Carnegie Hall debut nearly 50 years ago, leading the Boston Symphony Orchestra in 1969. With this Perspectives series, he celebrates more than 100 performances at Carnegie Hall. He is music director of the San Francisco Symphony; co-founder and artistic director of the New World Symphony, America’s Orchestral Academy; and conductor laureate of the London Symphony Orchestra. In addition to conducting the world’s leading orchestras, Mr. Tilson Thomas is also noted for his work as a composer and a producer of multimedia projects that are dedicated to music education and reimagining the concert experience. His compositions have been performed around the world, many premiering at Carnegie Hall during his first Perspectives series (2003–2005). He was also artistic director of Carnegie Hall’s 2011–2012 American Mavericks series in which he conducted the San Francisco Symphony in music by groundbreaking American composers. He has won 11 Grammy Awards for his recordings, is the recipient of the National Medal of Arts, and is a Chevalier dans l’ordre des Arts et des Lettres of France.

The San Francisco Symphony is widely considered to be among the most artistically adventurous and innovative arts institutions in the US. The orchestra was established by a group of San Francisco citizens, music-lovers, and musicians in the wake of the 1906 earthquake and played its first concert on December 8, 1911. Almost immediately, it revitalized the city’s cultural life. The San Francisco Symphony has grown in stature and acclaim under a succession of distinguished music directors: American composer Henry Hadley, Alfred Hertz (who led the American premieres of Parsifal, Salome, and Der Rosenkavalier at the Metropolitan Opera), Basil Cameron, Issay Dobrowen, the legendary Pierre Monteux (who introduced the world to Le sacre du printemps and Petrushka), Enrique Jordá, Josef Krips, Seiji Ozawa, Edo de Waart, Herbert Blomstedt (now Conductor Laureate), and current Music Director Michael Tilson Thomas. The San Francisco Symphony presents more than 220 concerts annually and reaches an audience of nearly 600,000 in its home of Davies Symphony Hall, through its multifaceted education and community programs, and on national and international tours.

Since Tilson Thomas assumed his post as the SFS’s eleventh Music Director in September 1995, he and the San Francisco Symphony have formed a musical partnership hailed as one of the most inspiring and successful in the country. His tenure with the Orchestra has been praised for outstanding musicianship, innovative programming, highlighting the works of American composers, and bringing new audiences to classical music. In addition, the Orchestra has been recognized nationally and internationally as a leader in music education and digital technology to make classical music available worldwide to as many people as possible.

Aligned with his Perspectives series, the playlist launches with a celebration of Michael Tilson Thomas’s recordings of American orchestral music, repertoire that he has championed throughout his career. The first track on the playlist—Gershwin’s An American in Paris, recorded with the San Francisco Symphony—pays homage to Carnegie Hall’s 2018 Opening Night. Subsequent featured tracks include San Francisco Symphony recordings of music by Aaron Copland, Charles Ives, John Adams, and Henry Cowell as well as selections by Leonard Bernstein, George Gershwin, Carl Ruggles, Steve Reich, Walter Piston, and Ingolf Dahl, recorded with the London Symphony Orchestra, New World Symphony, plus more. In coming months, the Symphony Orchestra playlist will continue to grow, celebrating the extended recording legacy of Tilson Thomas and the San Francisco Symphony and showcasing a variety of selections by conductors and orchestras appearing at the Hall in 2018-2019.

Carnegie Hall introduced its curated collection of classical music playlists on Apple Music in 2016. Designed to invite listeners to explore a wide range of music, Carnegie Hall’s curator page (applemusic.com/carnegiehall) hosts a variety of playlists reflective of the Hall’s varied concert programming, celebrating the renowned artists—past and present—who have appeared on the Hall’s illustrious three stages. Exclusive playlists are added and/or updated on a weekly basis, handpicked by Carnegie Hall artists and the Hall’s programming team.

Pre-concert talk at 7 PM with Ara Guzelimian, Provost and Dean, The Juilliard School.

Tickets for Carnegie Hall’s Opening Night Gala on October 3: Gala Benefit tickets—priced at $10,000; $6,000; $3,000; and $1,500—include concert seating and the post-concert dinner at Cipriani 42nd Street. Tickets priced at $1,000 include the concert and a pre-concert cocktail reception at 5:30 p.m. in Carnegie Hall’s Rohatyn Room. All gala benefit tickets are available by calling the Carnegie Hall Special Events office at 212-903-9679 or online at carnegiehall.org/OpeningNight2018.

A limited number of Opening Night concert-only tickets—priced at $57 to $190—are now available at the Carnegie Hall Box Office by calling CarnegieCharge at 212-247-7800, or online at carnegiehall.org.