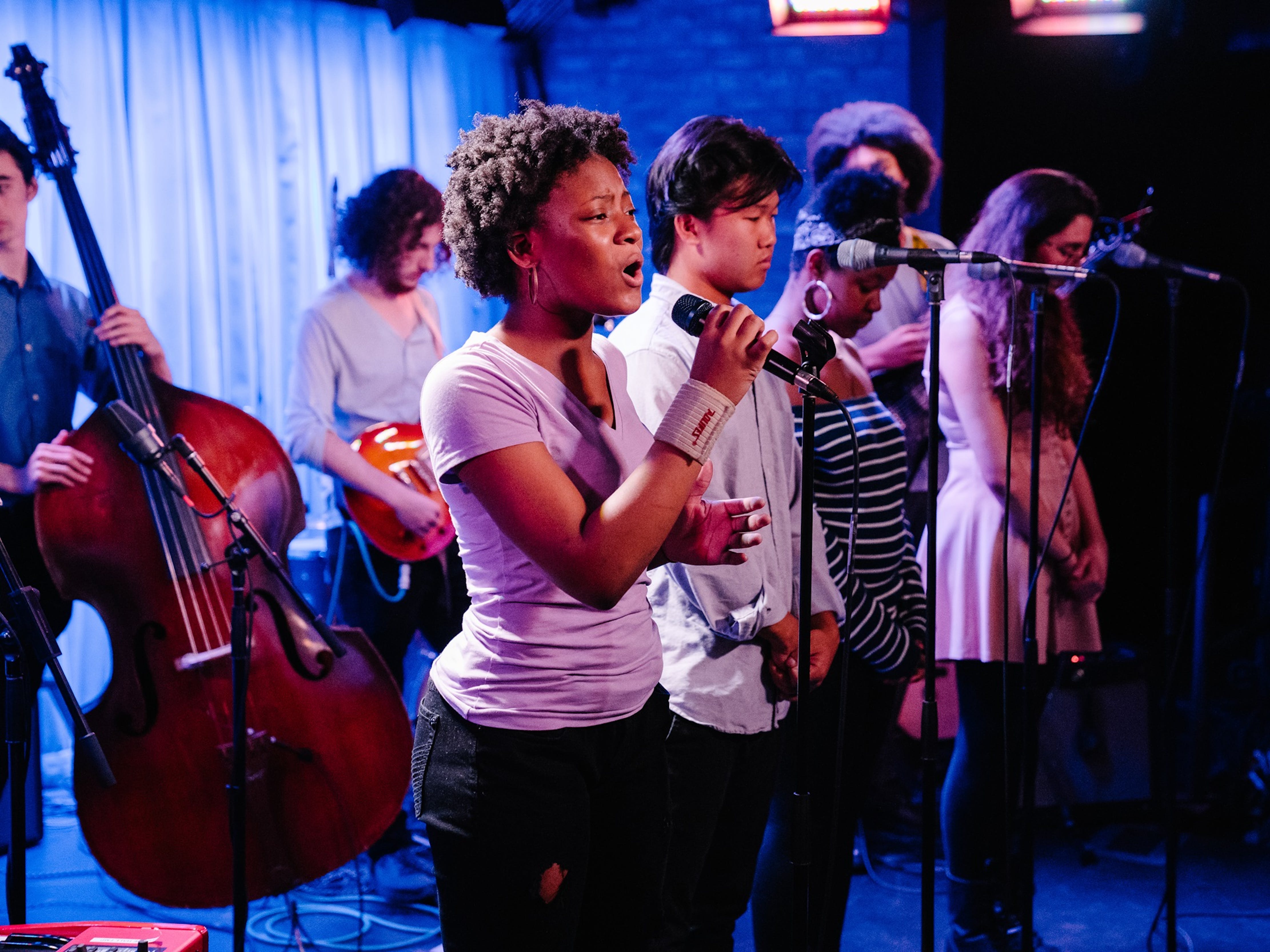 (New York, NY, September 27, 2018)—Throughout the season, New York City teens will come together to write, produce, and perform original music with their peers and learn from leading artists through Future Music Project, a vibrant, growing creative community based out of Carnegie Hall’s Resnick Education Wing. 2018 – 2019 programming will highlight Carnegie Hall’s Migrations: The Making of America festival, with young people reflecting on the impact of migration on their past, present, and future and creating new works responding to those themes. Select songs written by teens will be showcased on Sunday, May 19, 2019 at 7:30 p.m. as part of Soul Mechanisms, a special concert in Zankel Hall led by celebrated performer Toshi Reagon.

The Future Music Project Ensemble, a dynamic collective featuring some of the brightest young musicians from across New York City, will also embark on a five-borough tour during the year, including performances at the Bronx Library Center (December 7) and Rockwood Music Hall on the Lower East Side (January 26), as well as a peer-to-peer teen exchange with Projectivity, a Staten Island-based arts collective.

In addition to the ensemble, Future Music Project includes weekly afterschool workshops on songwriting, digital music production, concert design, and a sampler pack exploring basic musicianship, recording, and songwriting. These workshops take place at Carnegie Hall, as well as at Belmont Academy, Bronx Hope Academy, and Crossroads and Horizon juvenile detention centers. Weekly workshops are free, and lunch and a roundtrip MetroCard are provided at every workshop. Learn more about Weekly Workshops here.

Every Saturday throughout the school year, teens can also take part in Studio 57, a free drop-in space for exploring new music and collaborating with other talented young musicians. This season, “Meet the Pros” sessions will be offered each week, giving young people the chance to meet professional musicians from a variety of genres who are active in the New York City music scene. And once a month, young musicians will showcase original songs for family and friends as part of teen-driven Studio 57 Live performances. Featured “Meet the Pros” and Studio 57 Live artists include (additional guest artists to be announced):


Young musicians ages 14–19 can learn more and sign up to attend Studio 57 here. The program is free, and MetroCards and snacks are provided every Saturday.

Future Music Project also includes Count Me In, which gives eighth-grade singers the opportunity to prepare for auditions to performing arts high schools in New York City. This fall, in addition to biweekly workshops led by professional vocal coaches, Count Me In students will have the opportunity to take part in master classes led by acclaimed pianist and vocal coach Ken Noda.

Carnegie Hall’s Weill Music Institute (WMI) creates visionary programs that embody Carnegie Hall’s commitment to music education, playing a central role in fulfilling the Hall’s mission of making great music accessible to as many people as possible. With unparalleled access to the world’s greatest artists, WMI’s programs are designed to inspire audiences of all ages, nurture tomorrow’s musical talent, and harness the power of music to make a meaningful difference in people’s lives. An integral part of Carnegie Hall’s concert season, these programs facilitate creative expression, develop musical skills and capacities at all levels, and encourage participants to make lifelong personal connections to music. The Weill Music Institute generates new knowledge through original research and is committed to giving back to its community and the field, sharing an extensive range of online music education resources and program materials for free with teachers, orchestras, arts organizations, and music lovers worldwide. More than half a million people each year engage in WMI’s programs through national and international partnerships, in New York City schools and community settings, and at Carnegie Hall. This includes more than 450,000 students and teachers worldwide who participate in WMI’s Link Up music education program for students in grades 3 through 5, made possible through partnerships with over 110 orchestras in the US from Alaska to Puerto Rico, as well as internationally in Canada, Japan, Kenya, and Spain.

* * * * *
Lead support for Future Music Project is provided by Nicola and Beatrice Bulgari.

Major funding is provided by Ameriprise Financial and MetLife Foundation.

Additional support is provided by the Doris Duke Charitable Foundation.

Public support is provided by the City of New York through the Administration for Children’s Services, the Department of Youth and Community Development, and New York City Council Speaker Corey Johnson.