Bernard Labadie Kicks Off Inaugural Season as Principal Conductor of Orchestra of St. Luke's With Concert at Carnegie Hall on October 25

OSL in Association with Carnegie Hall Presents Three Programs in Zankel Hall as Part of OSL Bach Festival in June 2019, Including the US Premiere of Bernard Labadie’s Orchestral Setting of the Goldberg Variations 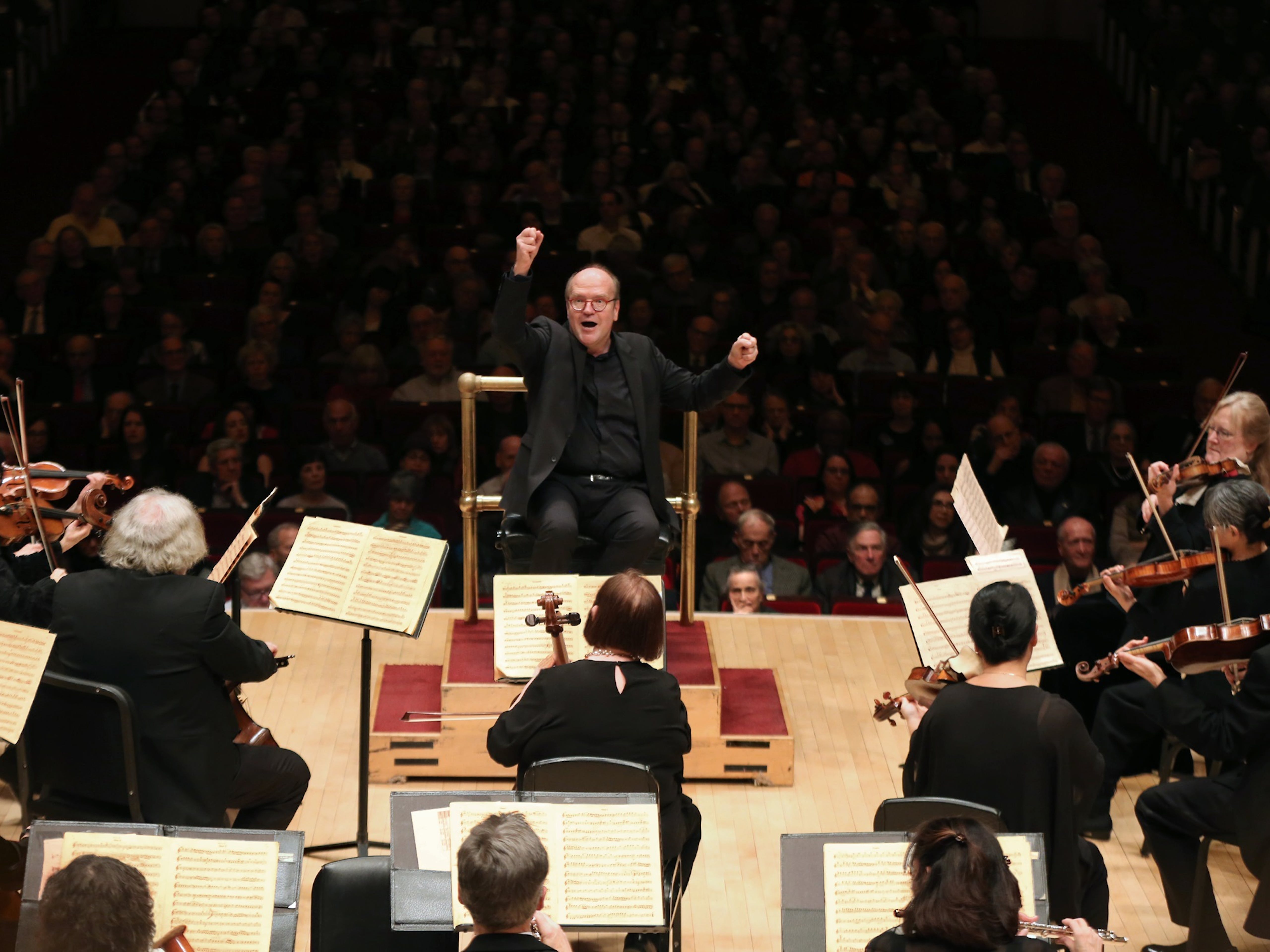 The final concert of the OSL residency at Carnegie Hall is led by Conductor Laureate Pablo Heras-Casado on Thursday, April 18 at 8:00 p.m. and features Ravel’s Piano Concerto in G Major performed by Hélène Grimaud. The program also juxtaposes Haydn’s “Drumroll” symphony with Prokofiev’s “Classical” symphony and Stravinsky’s Suite No. 1 for Small Orchestra.

OSL performs an additional concert at Carnegie Hall this season on Friday, October 5 at 8:00 p.m. in Stern Auditorium / Perelman Stage led by conductor Jochen Rieder, collaborating with famed tenor Jonas Kaufmann. The program, entitled You Mean the World To Me, includes song selections from Kaufmann’s 2014 hit album of the same name featuring music from Germany’s golden era of the 1920s and ’30s, which centered on works written for singing actors of the day.

Later in the season, as part of a new three-week, multi-disciplinary OSL Bach Festival in June 2019, OSL in association with Carnegie Hall presents three concerts in Zankel Hall exploring different aspects of Johann Sebastian Bach’s music through a theme of transformation. The festival launches in Zankel Hall on Thursday, June 6 at 7:30 p.m. with a program entitled Bach: Music of the Spiritfeaturing a performance of J.S. Bach’s adaptation of Pergolesi’s Stabat Mater – Psalm 51: "Tilge, Höchster, meine Sünden,” among other works. Guest artists joining the orchestra on stage include soprano Lydia Teuscher and countertenor Benno Schachtner.

The second concert on Thursday, June 13 at 7:30 p.m. entitled Virtuosic Bach: Music of the Courtcelebrates the instrumental virtuosity of J.S. Bach’s music by highlighting the musicians of OSL with a selection of the composer’s sinfonias, concertos, and orchestral suites.

The final Carnegie Hall concert as part of the OSL Bach Festival on Thursday, June 20 at 7:30 p.m.features the US premiere of Bernard Labadie’s arrangement of J.S. Bach’s Goldberg Variations for Baroque Ensemble. Set for strings and continuo, Maestro Labadie leads OSL in his arrangement which he calls “a gigantic concerto grosso.”

Widely recognized as one of the world’s leading conductors of Baroque, Classical, and Early-Romantic repertoire, Bernard Labadie made his debut with the OSL as Principal Conductor Designate at the Caramoor Summer Music Festival on July 2, 2017, leading an all-Mozart program. Now, as OSL’s fifth Principal Conductor, he joins the distinguished roster of Pablo Heras-Casado (2011-2017), Roger Norrington (1990-1994), Charles Mackerras (1998-2001), and Donald Runnicles (2001-2007).

Pablo Heras-Casado has been described by The New York Times as "the thinking person’s idea of a hotshot young conductor," although his character is better reflected in the quality of the long-term relationships he has developed with orchestras ranging from the San Francisco Symphony and Los Angeles Philharmonic to the Philharmonia Orchestra and London Symphony Orchestra; from Staatskapelle Berlin and the Mariinsky Orchestra to Symphonieorchester des Bayerischen Rundfunks and Freiburg Baroque Orchestra; and as Principal Conductor Laureate of the Orchestra of St. Luke’s and Principal Guest Conductor of Teatro Real, Madrid. That character also underlies his commitment as an ambassador for the Spanish charity Ayuda en Acción, supporting and promoting its work to eradicate poverty and injustice internationally.

Musical America’s 2014 Conductor of the Year, Pablo Heras-Casado holds the Medalla de Honor of the Rodriguez Acosta Foundation and the Ambassador Award of the Regional Government of Andalusia. In February 2012, he was awarded the Golden Medal of Merit by the Council of Granada, his hometown, of which he is also an Honorary Ambassador.

Created in 1985 by founding conductor and music director Bernard Labadie, La Chapelle de Québecis one of North America’s premiere voice ensembles. The group is made up exclusively of professional singers who are hand-picked from all over Canada. This unique chamber choir specializes in the choral/orchestral repertoire of the 17th and 18th centuries. The choir performs regularly with its other half, chamber orchestra Les Violons du Roy, and as a guest choir with some of the finest orchestras in North America. Its interpretations of the oratorios, requiems, masses, and cantatas of Bach, Handel, Mozart, and Haydn, as well as Fauré and Duruflé, are frequently hailed in the Canadian and international press. La Chapelle de Québec is heard regularly at Palais Montcalm in Quebec City and Maison symphonique in Montreal, as well as at the Walt Disney Concert Hall with the Los Angeles Philharmonic, at Carnegie Hall with Les Violons du Roy and Orchestra of St. Luke’s, and in Ottawa with the National Arts Centre Orchestra. The choir’s concerts are often broadcast by the CBC and Radio-Canada in Canada and by National Public Radio in the United States.

La Chapelle de Québec is also known for its role in Chemin de Noël, an annual event that brings music lovers from throughout the Québec City region together every December.

Orchestra of St. Luke’s (OSL) began in 1974 as a group of virtuoso musicians performing chamber music concerts at Greenwich Village’s Church of St. Luke in the Fields. Now in its 44th season, the orchestra performs diverse musical genres at New York’s major concert venues and has collaborated with artists ranging from Renée Fleming and Joshua Bell to Bono and Metallica. In fall 2018, celebrated expert in 18th-century music Bernard Labadie will begin his tenure as the orchestra’s fifth Principal Conductor. OSL’s signature programming includes a subscription series presented by Carnegie Hall, now in its 32nd season; an annual multi–week collaboration with Paul Taylor American Modern Dance at Lincoln Center; an annual summer residency at Caramoor Center for Music and the Arts; and a chamber music festival featuring appearances at The Morgan Library & Museum, the Brooklyn Museum, and Merkin Concert Hall at Kaufman Music Center. The orchestra has participated in 118 recordings, four of which have won Grammy Awards, has commissioned more than 50 new works, and has given more than 175 world, US, and New York City premieres. Nearly half of OSL’s performances each year are presented free of charge through its education and community programs, reaching over 10,000 New York City public school students. Additionally, OSL provides free instrumental coaching and presents student performances through its Youth Orchestra of St. Luke’s and its Mentorship Program for Pre-Professional Musicians. OSL built and operates The DiMenna Center for Classical Music in Hell’s Kitchen, New York City’s only rehearsal, recording, education, and performance space expressly dedicated to classical music. The center serves more than 500 ensembles and more than 30,000 musicians each year.

YOU MEAN THE WORLD TO ME

Orchestra of St. Luke’s dedicates this performance to the loving memory of our dear friend and colleague, Charles Hamlen, who served as the Orchestra’s Artistic Advisor. His joy in music and musicians created a wellspring of inspiration for all who knew him.

This concert is made possible by a leadership gift from Marina Kellen French and the Anna-Maria and Stephen Kellen Foundation.

BACH: MUSIC OF THE SPIRIT

VIRTUOSIC BACH: MUSIC OF THE COURT

Tickets are available at the Carnegie Hall Box Office on 57th Street and Seventh Avenue, or can be charged to major credit cards by calling CarnegieCharge at 212-247-7800 or by visiting the Carnegie Hall website, carnegiehall.org.