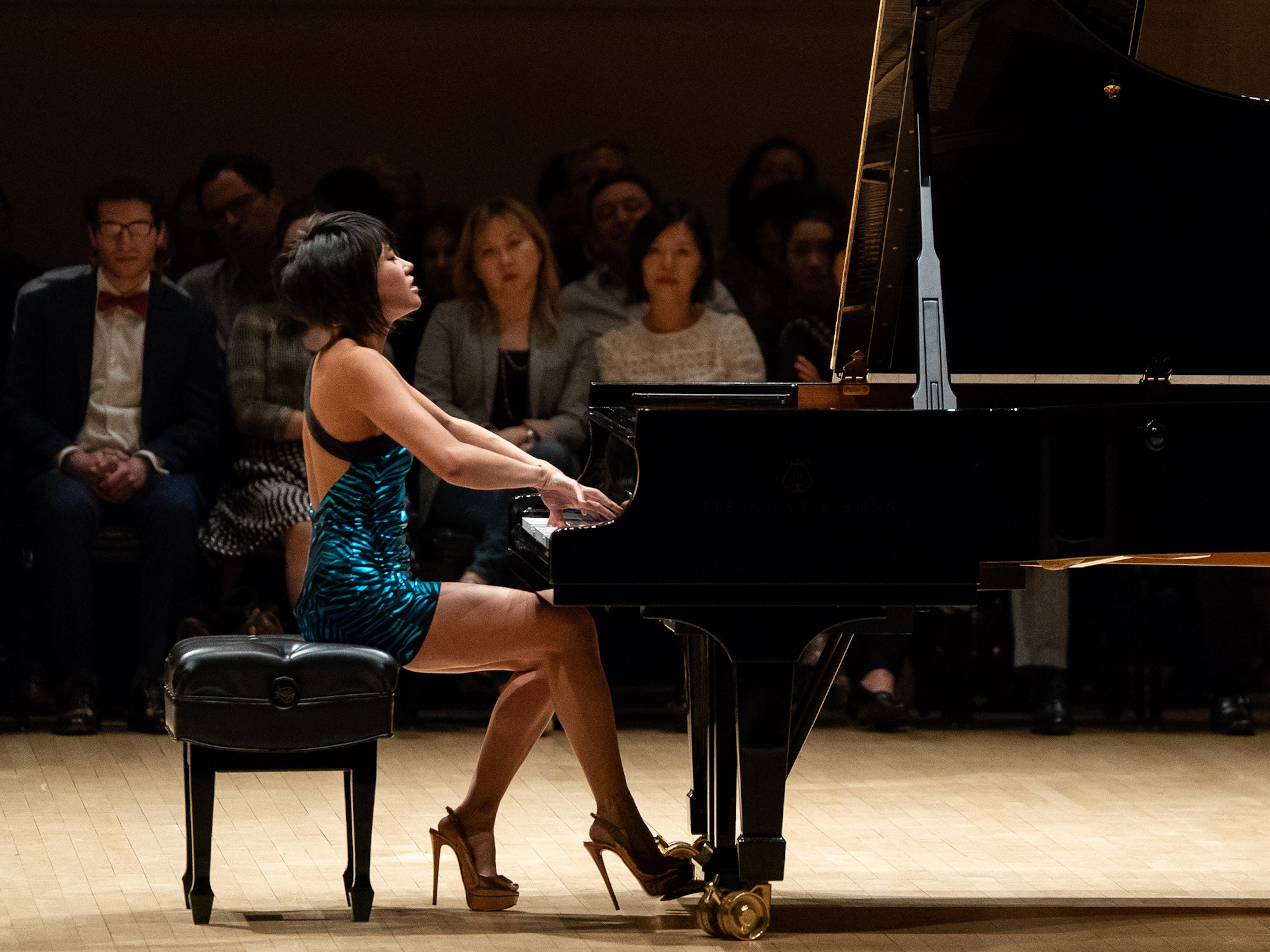 (New York, NY, October 1, 2018)—An artist with breathtaking talent and charismatic stage presence, Grammy Award–nominated pianist Yuja Wang curates a six-concert Perspectivesseries during Carnegie Hall’s 2018–2019 season, demonstrating the singular blend of technical prowess, keen musical insight, and quicksilver versatility that has established her as one of the world’s finest performers. Ms. Wang’s series offers creative collaborations, reunions with recital partners and artists who have influenced her career, and a night of classical music comedy—all displaying the pianist’s eclectic interests and versatility.

When asked about the curation of this Perspectives series, Ms. Wang said “When [Carnegie Hall] called me about this I was in New York, and then the idea of doing whatever I want for a whole year in my hometown, especially in Carnegie, just totally excited me. I didn't want to do anything that I always do, like a recital, or a concerto, or an orchestra. So I decided to perform with the friends and mentors that meant a lot in my life that has been the source of my inspiration, the source of encouragement, those who have motivated me to do what I do now … I'm thrilled to have all the people that are close to my heart to participate in this series in my home city.”

Ms. Wang kicks off her Perspectives series on Friday, October 26 at 8:00 p.m. in Stern Auditorium / Perelman Stage, performing with a quartet of percussionists headlined by Austrian star Martin Grubinger for a program to include the New York premieres of arrangements of Bartók’s Sonata for Two Pianos and Percussion and Stravinsky’s Le sacre du printemps by Mr. Grubinger’s father, Martin Grubinger Sr. (who is also performing on the program, alongside Alexander Georgiev and Leonhard Schmidinger). Also on the program is John Psathas’s One Study and Arturo Márquez’s Danzón No. 2 (arr. Leticia Gómez-Tagle).

Yuja Wang’s Perspectives series concludes in May with two concerts with fellow Perspectives artist and mentor Michael Tilson Thomas and the New World Symphony, America’s Orchestral Academy. On Wednesday, May 1 at 8:00 p.m. she plays Prokofiev’s Piano Concerto No. 5. in Stern Auditorium / Perelman Stage with Maestro Tilson Thomas leading the orchestra on a program that also includes the New York premiere of a new work by Julia Wolfe as well as Berlioz’s Symphonie fantastique. The following evening, Thursday, May 2 at 7:30 p.m., Ms. Wang plays the New York premiere of a work by Michael Tilson Thomas for solo piano. Also on the program is the New York premiere of Tilson Thomas’s Four Preludes on Playthings of the Wind written for and featuring soprano Measha Brueggergosman as well as Schubert’s String Quartet in D Minor, D. 810, "Death and the Maiden" (arr. for string orchestra by Mahler).

Born in Beijing, Yuja Wang was encouraged to pursue music at an early age, starting piano lessons at the age of six and studying at Beijing’s Central Conservatory of Music. She moved to Canada in 1999 and became the youngest student ever enrolled at Mount Royal Conservatory. Ms. Wang was appointed as a Steinway Artist in 2001 and accepted a place at the Curtis Institute of Music to begin studying piano with Gary Graffman the following year. After graduating from Curtis in 2008, she went on to be an exclusive Deutsche Grammophon recording artist, prompting Gramophone to name her as its 2009 Young Artist of the Year after the debut of her first album. The following year, Ms. Wang was awarded the prestigious Avery Fisher Career Grant. She earned a Grammy nomination for Best Classical Instrumental Solo for her 2011 recording of Rachmaninoff’s Piano Concerto No. 2 and Rhapsody on a Theme of Paganini with the Mahler Chamber Orchestra and Claudio Abbado.

This performance is proudly supported by ICBC U.S. Region.

A pair of superstars share the stage in their eagerly awaited return to Carnegie Hall. Violinist Leonidas Kavakos’s playing has been praised by The New York Times for its “balance of pyrotechnics and lyricism.” Yuja Wang has been called “quite simply the most dazzlingly, uncannily gifted pianist in the concert world today” (San Francisco Chronicle). Each outstanding soloists, together “they sound like a single organism” (Financial Times), and are certain to leave you breathless with the beauty and intensity of their performance.

Yuja Wang’s artistry knows no bounds. So does her sense of fun. In what promises to be an evening of laughter and dizzying virtuosity, she joins the irrepressible classical music comedy duo Igudesman & Joo. The duo has been bringing laughter to concert halls around the world, often with orchestras such as the New York Philharmonic and Chicago Symphony Orchestra, and their videos on YouTube have gathered more than 45 million views. The last time the duo played at Carnegie Hall, Billy Joel and Joshua Bell jumped on stage for surprise encores. Be prepared for an anything-goes concert.