Carnegie Hall Announces Schedule of 100+ Events for Migrations: The Making of America Festival

Carnegie Hall and 70+ Prestigious Institutions From Across New York City and Beyond Explore The Journeys of People Who Shaped and Influence the Evolution of American Culture with Five-Week Citywide Festival, Including Music, Dance, Exhibitions, Talks, and Films

Festival Kicks Off at Carnegie Hall on March 9 with Live From Here with Chris Thile, An Evening of Traditional Scots, Irish, and American Folk Music, Radio Broadcast Live Nationwide 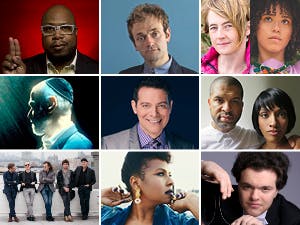 (New York, NY, November 15, 2018)—From March 9-April 15, 2019, Carnegie Hall presents Migrations: The Making of America, a citywide festival that traces the journeys of people from different origins and backgrounds who helped to shape and influence the evolution of American culture. The five-week festival with more than 100 events will celebrate the many contributions—cultural, social, economic, and political—of the people who helped to build America’s culture with musical programming at Carnegie Hall and public programming, performances, exhibitions, and events at more than 70 leading cultural and academic institutions across New York City and beyond.

At Carnegie Hall, festival concerts will examine the musical legacies of three migrations: the crossings from Scotland and Ireland during the 18th and 19th centuries, the immigration of Jews from Russia and Eastern Europe between 1881 and the National Origins Act of 1924, and the Great Migration—the exodus of African Americans from the South to the industrialized cities of the Northeast, Midwest, and West from 1917 into the 1970s. Migrations concerts by leading artists at Carnegie Hall includes performances of bluegrass, old-time, klezmer, Yiddish musical theater, the Great American Songbook, blues, jazz, and more.

Events at festival partner organizations, ranging from music and dance to exhibitions, talks, and films, will further amplify the themes celebrated by Carnegie Hall as well as explore many other migrations from around the world—from elsewhere in Europe, Latin America, the Caribbean, and Asia as well as the internal migration of Native Americans—all of which have contributed to American culture today. Programming throughout the festival also focuses on New York City’s history and identity as a city welcoming to immigrants, highlighting traditions and cross-cultural collaborations of the city’s many diverse communities.

“With Carnegie Hall’s largest festival yet, we invite audiences to look more closely at how the migrations of people to and within this country and the evolution of art forms that they have developed here have been powerful influences on the creation and development of American culture,” said Clive Gillinson, Executive and Artistic Director of Carnegie Hall. “As we have planned this festival, it has been wonderful to see the passionate responses from partner organizations and how this theme has resonated with so many of them, resulting in a truly citywide celebration. We hope Migrations will be opportunity to take a fresh look at how America has been enriched by the diversity of cultures, traditions, and people that make up this great nation.”

Click here for a full event schedule by genre as of November 2018.

The Migrations festival kicks off at Carnegie Hall on March 9, with Live From Here with Chris Thile, a program exploring American bluegrass and old-time’s Scots and Irish roots. The concert will be broadcast live on the radio and online, distributed nationwide by American Public Media. The festival continues at the Hall with a special double-bill with Scottish songwriter and spoken-word performer Karine Polwart and banjo player-songwriter Kaia Kater (March 23); an evening featuring a contemporary take on traditional Irish/Celtic music with The Gloaming(April 6); American klezmer clarinetist and bluegrass mandolinist Andy Statman and his trio (March 14); an evening with pianist and vocalist Michael Feinstein, featuring songs by Jerome Kern, Irving Berlin, Richard Rodgers, Harold Arlen, and others drawn from the American Songbook (March 27); and From Shtetl to Stage: A Celebration of Yiddish Music and Culture features a company of extraordinary Yiddish talent as well as stars of the classical, folk, and theater worlds as they mix chestnuts from the Yiddish theater and folk song repertoire with Yiddish-tinged vaudeville, art song, classical music, and klezmer—plus a scene from the Tony Award-winning show Indecent, introduced by Pulitzer Prize-winning playwright Paula Vogel; featured artists include clarinetist David Krakauer, violinist Gil Shaham, pianist Evgeny Kissin, and 2018 Tony Award winner, and star of Broadway’s The Band’s Visit, Katrina Lenk (April 15). Trumpeter Nicholas Payton traces the path of African rhythms from their arrival in the Caribbean through their journey to New Orleans and throughout the United States (March 16) and singer-songwriter Deva Mahal takes to the Zankel Hall stage (April 13). With a roster of guest artists including tenor Lawrence Brownlee, Pastor Smokie Norful, Toshi Reagon, and filmmaker Ava DuVernay, jazz pianist Jason Moran and mezzo-soprano Alicia Hall Moran draw upon their own family lore and the historical record of the Great Migration with Two Wings: The Music of Black America in Migration, shining a light on an epic event that changed the sound of America forever (March 30).

Among the festival partner music highlights are:

Dance and theater highlights include:

Many festival partners will offer programming highlighting New York City’s unique identity as a city with a tradition of welcoming immigrants, including events at the Ellis Island National Museum of Immigration, the Museum of the City of New York, the New-York Historical Society, the Tenement Museum, and more. Special tours include The Hospital Zone at Ellis Island: A Walking Tour with guides from Save Ellis Island at Castle Clinton in Battery Park (March 23; presented by the New York Academy of Medicine and the Museum of the City of New York in collaboration with Wellcome).

The Migrations festival immediately precedes the City of New York’s Immigrant Heritage Week (April 15-21), when New Yorkers hold a week-long celebration of collective immigrant heritage with events throughout the week in recognition of the date on which the most immigrants entered the US through Ellis Island: April 17, 1907 (presented by the Mayor’s Office of Immigrant Affairs).

Inspired by the Migrations festival, a Spring Family Day in Carnegie Hall’s Resnick Education Wing will highlight how Harlem became the hub for African American artistic expression, offering a wide range of free, interactive fun activities for children and families (April 7). Through songwriting workshops this season created by Carnegie Hall’s Weill Music Institute, New Yorkers of all ages will explore the music that their families brought to America, crossing generations and borders, culminating in a performance titled Soul Mechanisms: A Concert Celebrating the Music of Migrations led by celebrated performer Toshi Reagon in Zankel Hall (May 19).

In addition to the March 9 national radio broadcast of Live From Here with Chris Thile on American Public Media which kicks off the festival, Migrations will reach national and international audiences through radio and digital offerings, including: a six-week radio series on This Irish American Lifepresented by Glucksman Ireland House / The Center for Irish Studies at New York University; radio interviews on Fiona Ritchie’s award-wining NPR show The Thistle & Shamrock with festival artists Chris Thile and Karine Polwart; The Museum of Modern Art’s digital exhibit, One-Way Ticket: Jacob Lawrence’s Migration Series, which takes an in-depth look at Lawrence’s landmark 1941 painting series about the mass movement of African Americans from the rural South to the urban North; an online course, Oh Mama, I’m in Love!: The Story of the Yiddish Stage presented by the YIVO Institute for Jewish Research, plus more.

View a full Migrations: The Making of America event schedule by genre as of November 2018.

Migrations: The Making of America Festival Partners (as of November 2018)

Two Wings: The Music of Black America in Migration is sponsored by United Airlines®, Official Airline of Carnegie Hall. The Trustees of Carnegie Hall gratefully acknowledge the generosity of Mr. and Mrs. Earle S. Altman in support of the 2018-2019 season.

Thanks to the Department of Homeless Services for supporting families during Family Days. Family Days are generously supported, in part, by an endowment gift from Linda and Earle S. Altman.

Soul Mechanisms: A Concert Celebrating the Music of Migrations, a creative learning project for young people across New York City, is made possible in part by generous support from Martha and Bob Lipp.

Support for the Russian and Eastern European Jewish Migration series of the Migrations festival is provided by The Polonsky Foundation.

Chris Thile is holder of the 2018-2019 Richard and Barbara Debs Composer’s Chair at Carnegie Hall.

###
For high resolutions images of Migrations: The Making of America artists, please contact the Carnegie Hall Public Relations Office at 212-903-9750 or publicrelations@carnegiehall.org.