All Together: A Global Ode To Joy

Conductor Marin Alsop Leads All Nine Concerts, Kicking Off in São Paulo in December 2019 and Culminating at Carnegie Hall in December 2020

Bringing Communities Together to Celebrate the Power of Music 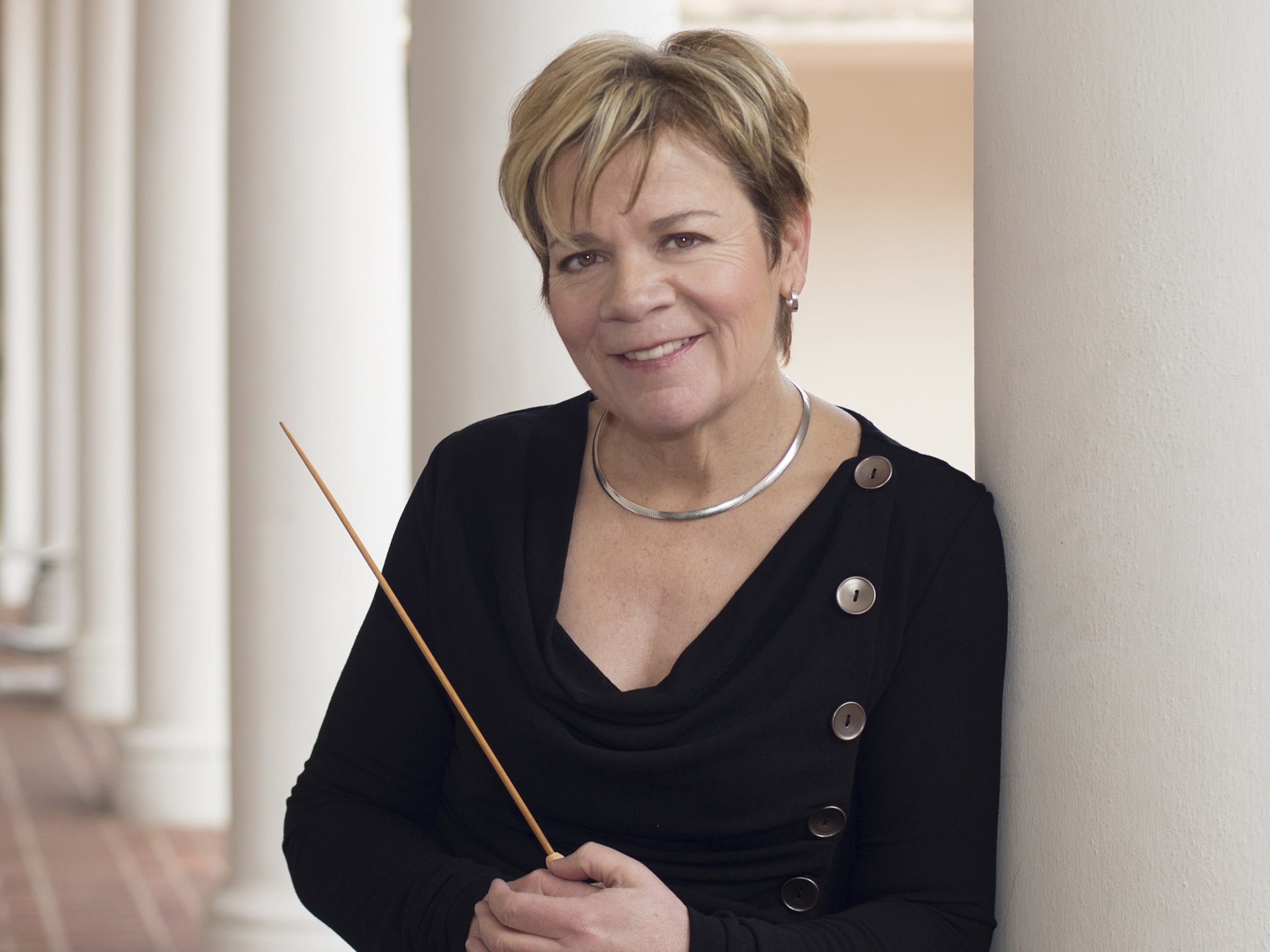 (New York, NY, January 30, 2019)—Creating music together can be a tremendously joyful act, binding people together in both times of celebration and moments of hardship. When Beethoven incorporated Friedrich Schiller’s Ode to Joy poem into his Ninth Symphony, it was a radical call for equality, freedom, and brotherhood.

In celebration of the 250th anniversary of Beethoven’s birth, renowned conductor Marin Alsop will lead performances of Beethoven’s Ninth Symphony on five continents with nine acclaimed orchestras as part of All Together: A Global Ode to Joy, a far-reaching yearlong project running from December 2019 to December 2020. Reimagining Beethoven’s Ninth as a twenty-first century call for unity, justice, and empowerment, community members will compose new music, boldly interpreting Ode to Joy’s ideas in response to today’s world and translating the text into local languages.

“Ode to Joy is about standing up and being counted in this world. It’s about believing in our power as human beings,” said Ms. Alsop. “Everyone will be tied together by this experience. And I think that’s the important element—that through this project, we will bring diverse communities together, and communities who don’t normally work together.”

All Together: A Global Ode to Joy presents a rare opportunity for major musical institutions from around the world to unite in a single project. Each partner will reimagine the concert experience for their own community, incorporating newly-created music alongside the symphony and featuring artists from their own region. In each performance, Ode to Joy will be translated anew into a local language. Concerts will take place in São Paulo, Brazil; London, England; Baltimore, Maryland, USA; major centers of New Zealand; Sydney, Australia; Vienna, Austria; Durban and Johannesburg, South Africa; and New York, New York, USA.

“Creative learning projects have the power to inspire dialogue and bring communities together,” said Clive Gillinson, Carnegie Hall’s Executive and Artistic Director. “Through its global reach, this project has the potential to shine a light on all of the inspirational and imaginative work happening at partner institutions around the world, strengthen connections across continents, and present a truly unique and exciting take on Beethoven’s Ode to Joy.”

Carnegie Hall will present a final concert in Stern Auditorium / Perelman Stage on December 6, 2020. Rooted in the vibrancy of New York City and connecting to each of the global sites, it will feature performers of all ages and guest artists from across genres, backed by a 300-voice choir made up of singers from across the city.

In advance of the Carnegie Hall performance in December, New York City songwriters will join mezzo-soprano Joyce DiDonato for a celebratory concert in Zankel Hall on April 5, 2020, showcasing this new music. Around the world, other creative artists will present their own takes on what may be the most popular piece of classical music ever written.

“For me, Beethoven’s Ninth Symphony is a revolutionary piece. It’s a piece that changed the history of classical music certainly, but it’s a piece that also pushed the envelope,” said Ms. Alsop. “That sense of rebellion and that sense of relevance has always struck me as being unique. Having an opportunity to celebrate the 250th anniversary of Beethoven’s birth by reimagining his symphony—I think he would have loved it.”

Final concerts around the world will kick off in December 2019 and continue throughout the following year at venues in South America, Europe, Australia, New Zealand, Africa, and North America:

Exploring the legacy of slavery in Brazil during the nineteenth century and to this day, this performance will include traditional and contemporary music between the movements of Beethoven’s symphony, and will feature a new translation of the Ode to Joy into Brazilian Portuguese. The final concert will be held outdoors at the iconic plaza of the Museum of Modern Art on Paulista Avenue in the heart of São Paulo.

Crafted with young people from across Great Britain, a 250-strong choir will perform a new English interpretation of the famous text, created as part of a community writing project. Performed by Southbank Centre's Associate Orchestra, the National Youth Orchestra of Great Britain, along with young musicians from across London, more than 400 performers will fill the Royal Festival Hall stage.

Featuring a new translation by Baltimore-based rapper and musician Wordsmith, this rendition will include a new arrangement of “Lift Every Voice and Sing,” a spiritual song written as a poem by James Weldon Johnson, in dialogue with Ode to Joy, a newly commissioned work by Indian-American composer Reena Esmail, and interstitial music by artists from the rich musical community of Baltimore, in a concert led by BSO Music Director Marin Alsop.

The performances will include a translation into te reo Maori and newly commissioned pieces by New Zealand composers. Local youth and school choirs will join the orchestra to perform in several locations throughout New Zealand.

These performances of Beethoven’s Ninth will celebrate Australia’s rich multicultural and indigenous heritage, with choristers drawn from Sydney’s community choirs, and with music from Australia’s First Nations.

New Chief Conductor Marin Alsop will lead the ORF Vienna Radio Symphony Orchestra in a performance of Beethoven’s Ninth in the city in which it was first performed. The concert, to be held at Wiener Konzerthaus, will feature the children of Superar, an educational community initiative located in Vienna’s Favoriten district, in dialogue with musicians from all over the world.

These performances will include soloists from the KwaZulu-Natal performance and a translation into Zulu.

This performance will include a translation into Zulu and members of the Township Choirs onstage with the orchestra.

The culminating concert at Carnegie Hall will feature an orchestra comprising the finest players of tomorrow, backed by a 300-voice choir featuring singers of all ages from across New York City who will sing a new translation of the Ode to Joy by United States Poet Laureate, Tracy K. Smith.

Learn more about All Together: A Global Ode to Joy at carnegiehall.org/AllTogether.

Over the past twelve years, Carnegie Hall’s Weill Music Institute (WMI) has presented a series of exciting creative learning projects, each designed to bring students and world-class artists together for musical exploration as they prepare to perform a major work. All Together: A Global Ode to Joy continues this tradition, both in New York and through all the programming presented by partners around the world. Past creative learning projects at Carnegie Hall have centered on Stravinsky’s The Rite of Spring (2007, in partnership with the Berliner Philharmoniker Education Project); Orff’s Carmina Burana (2012); Osvaldo Golijov’s La Pasión según San Marcos (2013); and Ellington’s Sacred Music(2014, in partnership with Jazz at Lincoln Center). Marin Alsop has led three previous WMI creative learning projects, including Bernstein’s Mass (2008); Too Hot to Handel, a gospel-influenced re-invention of Handel’s Messiah (2010); and The Somewhere Project, a citywide exploration of West Side Story (2016).


Marin Alsop is an inspiring and powerful voice in the international music scene, a music director of vision and distinction who passionately believes that “music has the power to change lives.” She is recognized across the world for her innovative approach to programming and for her deep commitment to education and to the development of audiences of all ages. She has been music director of the Baltimore Symphony Orchestra since 2007, and she has had two extensions in her tenure, now confirmed until 2021. As part of her artistic leadership in Baltimore, Ms. Alsop has created several bold initiatives: OrchKids, for the city’s young people, and the BSO Academy and Rusty Musicians, for adult amateur musicians. In 2012, she became principal conductor and music director of the São Paulo Symphony Orchestra, with her contract now extended to the end of 2019, when she becomes conductor of honor. In September 2019, she becomes chief conductor of the ORF Vienna Radio Symphony Orchestra. Ms. Alsop received the prestigious MacArthur Fellowship, is an honorary member of the Royal Academy of Music and Royal Philharmonic Society, and is the director of graduate conducting at the Johns Hopkins Peabody Institute. She attended Juilliard and Yale, which awarded her an honorary doctorate in 2017.

Kansas-born Joyce DiDonato entrances audiences and critics across the globe in operas that range from Mozart and Handel to Rossini, Donizetti, Berlioz and Jake Heggie. Winner of the 2018 Olivier Award for Outstanding Achievement in Opera, she is a multi-Grammy Award winner and a fierce advocate for the arts. An exclusive recording artist with Erato / Warner Classics, the most recent addition to Joyce’s acclaimed discography is Berlioz’ Les Troyens, which won the award for Best Complete Opera Recording at the 2018 International Opera Awards and the 2018 BBC Music Magazine Opera Award, and was nominated in the opera category at this year’s Gramophone Awards. Her solo albums include In War & Peace, which won a 2017 Gramophone Award; Stella di Napoli; the Grammy Award-winning Diva Divo; and Drama Queens. This season, Erato / Warner Classics releases two new albums by the celebrated singer: Songplay and Into the Fire. A Carnegie Hall Perspectives artist in the 2019–2020 season, Ms. DiDonato is a longtime partner of Carnegie Hall’s Weill Music Institute. Her first Perspectives series was offered during Carnegie Hall’s 2014-2015 season, and included master classes and work with New York City middle school singers participating in WMI’s Count Me In program. In spring 2018, she lent her renowned vocal talents to Hopes and Dreams: The Lullaby Project on Decca Gold (Verve Label Group). The heartwarming album is a collection of songs written by New Yorkers participating in Carnegie Hall’s Lullaby Project, recorded by an impressive array of leading international artists.


Carnegie Hall’s Weill Music Institute (WMI) creates visionary programs that embody Carnegie Hall’s commitment to music education, playing a central role in fulfilling the Hall’s mission of making great music accessible to as many people as possible. With unparalleled access to the world’s greatest artists, WMI’s programs are designed to inspire audiences of all ages, nurture tomorrow’s musical talent, and harness the power of music to make a meaningful difference in people’s lives. An integral part of Carnegie Hall’s concert season, these programs facilitate creative expression, develop musical skills and capacities at all levels, and encourage participants to make lifelong personal connections to music. The Weill Music Institute generates new knowledge through original research and is committed to giving back to its community and the field, sharing an extensive range of online music education resources and program materials for free with teachers, orchestras, arts organizations, and music lovers worldwide. More than 600,000 people each year engage in WMI’s programs through national and international partnerships, in New York City schools and community settings, and at Carnegie Hall. This includes half a million students and teachers worldwide who participate in WMI’s Link Up music education program for students in grades 3 through 5, made possible through Carnegie Hall partnerships with over 115 orchestras in the US from Alaska to Florida, as well as internationally in Brazil, Canada, China, Colombia, Japan, Kenya, and Spain.