—Link Up: The Orchestra Moves—

15,000 New York City-Area Students Will Participate In Interactive Concerts At Carnegie Hall On May 21, 22, & 23 As Part Of Link Up Music Education Program

Rossen Milanov Conducts Link Up Orchestra in New Work by Angélica Negrón, Alongside Works by Beethoven, Márquez, and Bizet, with Students Performing from their Seats 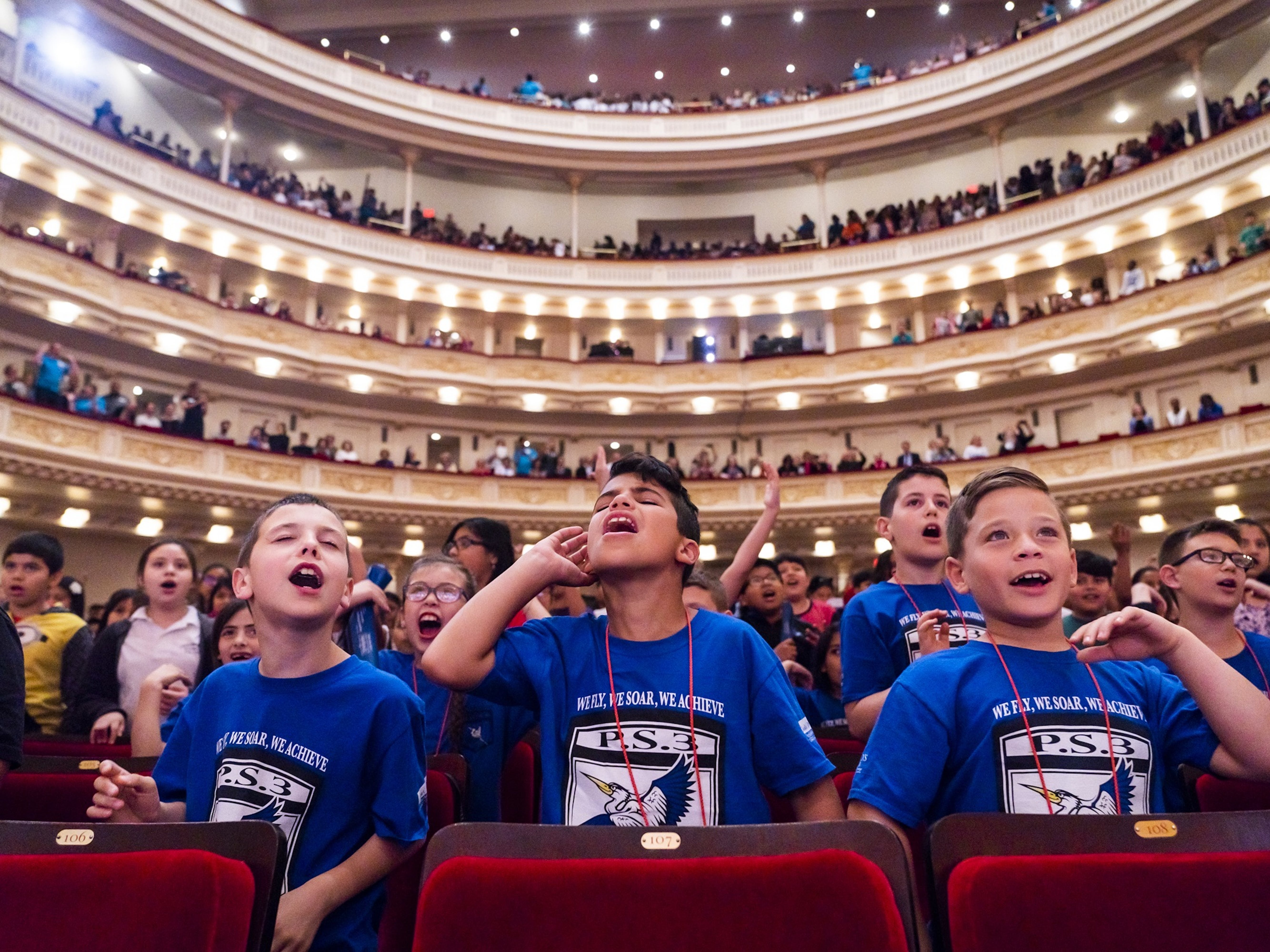 For 34 seasons, Carnegie Hall’s Link Up music education program has facilitated deeper connections between the concert hall and the classroom through an instrument-focused curriculum that culminates with students performing with a professional orchestra from their seats, often marking the first time many students will have set foot in a concert hall. The nearly 15,000 New York City-area students in grades 3-5 who participate in this program will travel to Carnegie Hall to take part in one of six concerts in Stern Auditorium / Perelman Stage on Tuesday, May 21, Wednesday, May 22, and Thursday, May 23 at 10:15 and 11:45 a.m.

The theme of this year’s concerts is Link Up: The Orchestra Moves—an interactive program developed by Carnegie Hall’s Weill Music Institute that explores how composers use the orchestra to create musical movement. Throughout the school year, students analyze and interpret how music moves through meter, melodic patterns, and expressive qualities in their classrooms. At the end of the year, they put their knowledge into practice during the culminating performances of The Orchestra Moves at Carnegie Hall. The concert program, hosted by teaching artist and composer Thomas Cabaniss, features Rossen Milanov conducting the Link Up Orchestra, which is made up of current fellows and alumni of Ensemble Connect as well as other dynamic performers and music educators, all of whom reflect the vibrant makeup of New York City. The program also welcomes elementary school students from PS 254K, PS 971, and PS 165Q to perform onstage as part of the orchestra, and features a student composition screened onstage from PS 295. The Orchestra Moves highlights works by Beethoven, Márquez, and Bizet, among others, along with an interactive world premiere performance of a new work by Puerto Rican-born composer Angélica Negrón (commissioned by Carnegie Hall as part of its 125 Commissions Project), who will make an appearance in all six performances. To experience Link Up in action, view this video.

The longest-running education program of Carnegie Hall’s Weill Music Institute (WMI), Link Up provides an opportunity for its participants to join the orchestra by teaching them to sing and play an instrument in the classroom. In addition to students in New York, young people across the country and around the world are also taking part in Link Up. Partner orchestras can utilize any of the program materials created by Carnegie Hall—including teacher guides, student materials, concert scripts, and concert visuals—for free as they work with schools in their own communities. Link Up welcomes 15 new partners this year from across the United States, along with new partners in Colombia and Spain.

Link Up curricula and program materials are now being shared at no cost with more than 110 orchestras across the country from Alaska to Florida, as well as in Brazil, Canada, China, Colombia, Japan, Kenya, and Spain, serving more than 450,000 students and teachers around the world. As expansion continues, the program’s materials have been translated into several languages, including Chinese, Portuguese, Spanish and Japanese.

The following national and international Link Up partners are new this season:

For more information about Link Up, and to see a full list of national and international Link Up partners during the 2018–2019 season, please click here.

Carnegie Hall’s Weill Music Institute (WMI) creates visionary programs that embody Carnegie Hall’s commitment to music education, playing a central role in fulfilling the Hall’s mission of making great music accessible to as many people as possible. With unparalleled access to the world’s greatest artists, WMI’s programs are designed to inspire audiences of all ages, nurture tomorrow’s musical talent, and harness the power of music to make a meaningful difference in people’s lives. An integral part of Carnegie Hall’s concert season, these programs facilitate creative expression, develop musical skills and capacities at all levels, and encourage participants to make lifelong personal connections to music. The Weill Music Institute generates new knowledge through original research and is committed to giving back to its community and the field, sharing an extensive range of online music education resources and program materials for free with teachers, orchestras, arts organizations, and music lovers worldwide. More than half a million people each year engage in WMI’s programs through national and international partnerships, in New York City schools and community settings, and at Carnegie Hall. This includes more than 450,000 students and teachers worldwide who participate in WMI’s Link Up music education program for students in grades 3 through 5, made possible through partnerships with over 110 orchestras in the US from Alaska to Florida, as well as internationally in Brazil, Canada, China, Colombia, Japan, Kenya, and Spain.

Lead support for Link Up is provided by Fund II Foundation.

Additional funding for Link Up is provided by the Rose M. Badgeley Residuary Charitable Trust, The Barker Welfare Foundation, JJR Foundation, and Joan and Sanford I. Weill and the Weill Family Foundation.

Link Up in New York City schools is made possible, in part, by an endowment gift from The Irene Diamond Fund.

Image at top by Chris Lee.