My City, My Song
Family Concerts on Saturday, May 11, Introduce Children to Music From Around The World

Nearly 30,000 Students Participate in Musical Explorers Curriculum Across the Country 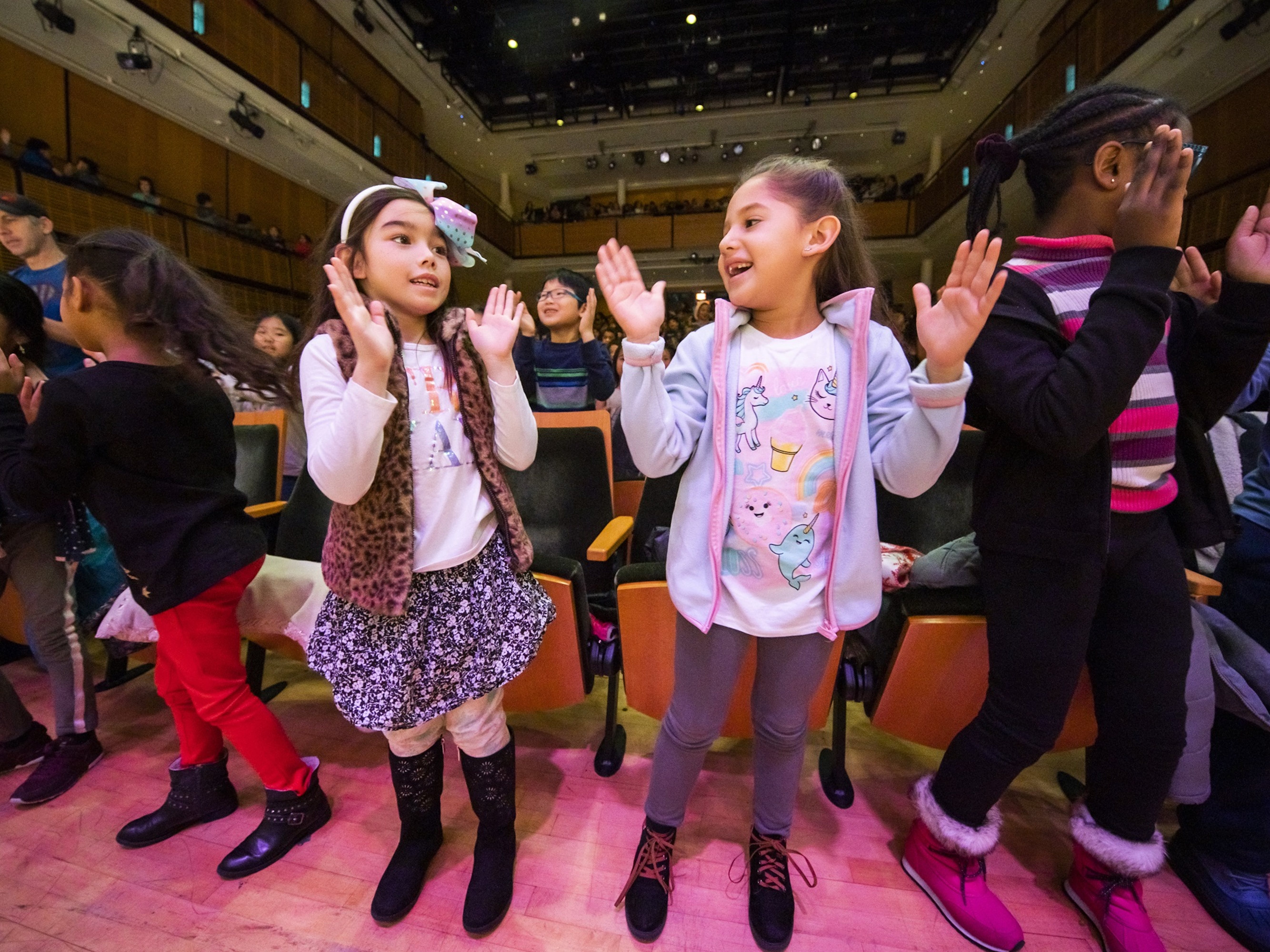 On Saturday, May 11, 2019 at 12:00 p.m.3:00 p.m., three vibrant New York City-based artists will perform in Zankel Hall as part of My City, My Song, an interactive Family Concert celebrating music from around the world. The concert features jazz standards performed by vocalist Brianna Thomas, the percussive rhythms of Puerto Rican bomba and plena music from father-daughter duo Juan Gutiérrez and Julia Gutiérrez-Rivera (with fellow musicians from Los Pleneros de la 21), and samba from Brazil’s Carnival with singer-songwriter Fabiana Masili. Free pre-concert activities are offered one hour prior to each performance, preparing parents and children to sing and dance along with the artists.

New York City public school students in grades K–2 have been learning about these same artists throughout the semester as part of the Musical Explorers program, which teaches basic music skills in the classroom as children study songs from different cultures, reflect on their own communities, and develop singing and listening skills. From Tuesday, May 7 to Friday, May 10 thousands of children will visit Carnegie Hall for high-energy culminating concerts with their classes.

This season, Musical Explorers will reach more than 5,000 students across New York City. Carnegie Hall is also partnering with the Savannah Music Festival in Savannah, Georgia; The Broad Stage in Santa Monica, California; Omaha Performing Arts in Omaha, Nebraska; and the Newman Center for the Performing Arts in Denver, Colorado to adapt the program for their own communities. Nearly 9,000 additional students across the country take part through a new digital pilot program, with lesson plans, songs, and educational videos available for free online. Altogether, just under 30,000 students will participate in Musical Explorers across the United States during the 2018–2019 season.

About the Artists
Born and raised in Peoria, Illinois, Brianna Thomas made her singing debut at age six with her father’s band, performing a duet rendition of the jazz classic, “What a Wonderful World.” Since graduating college in 2011, Brianna has performed with many jazz greats including Clark Terry, Wycliffe Gordon, Houston Person, Mulgrew Miller, Wynton Marsalis, The Legendary Count Basie Orchestra, Michael Feinstein, and her longtime hero, Dianne Reeves. Brianna also continues to perform worldwide at venues such as Jazz at Lincoln Center, Smoke Jazz & Supper Club, Ginny’s Supper Club, Minton’s Playhouse, Jazz at Lincoln Center Doha, the Apollo Theater, and the prestigious Montreux, Umbria, Bern, and Sochi jazz festivals. Brianna was a 2014 musical ambassador for American Music Abroad, as a guest vocalist with The Amigos Band, singing folk, bluegrass, gospel, and jazz. She teaches with Jazz at Lincoln Center’s Jazz for Young People program to educate students in New York City schools about the importance of jazz in American history and today.

Puerto Rican–born percussionist, composer, and arranger Juan Gutiérrez was instrumental in helping to bring bomba and plena music to New York City and the rest of the US. In 1983, he met master plena practitioner Marcial Reyes in New York; together they created Los Pleneros de la 21. Juan has remained at the helm of Los Pleneros de la 21 ever since, masterminding its ongoing success, including a 2005 Grammy nomination. For his vision and contributions, Juan was named an NEA National Heritage Fellow. Julia Gutiérrez-Rivera is Juan’s youngest daughter. As Los Pleneros de la 21 formed when she was 10 months old, Julia was weaned on bomba and plena, and is now a guiding member of the group and respected bomba and plena dancer and educator.

Fabiana Masili is a vocalist and songwriter who plays a range of Brazilian music, including bossa nova, samba, maracatu, and forró, as well as jazz and rock. Since moving to New York City in 2003, she has worked with a diverse roster of artists, including Claudio Roditi, Cidinho Teixeira, Dom Salvador, Slide Hampton, Jeremy Pelt, and Nation Beat, and created an all-female psychedelic rock band called As Lolas. She has performed at such venues as Dizzy’s Club Coca-Cola, SummerStage, Joe’s Pub at The Public, and Lincoln Center Out of Doors. She is also dedicated to her work as a teaching artist, sharing Brazilian music and culture with New York City’s students.

About Carnegie Hall’s Weill Music Institute
Carnegie Hall’s Weill Music Institute (WMI) creates visionary programs that embody Carnegie Hall’s commitment to music education, playing a central role in fulfilling the Hall’s mission of making great music accessible to as many people as possible. With unparalleled access to the world’s greatest artists, WMI’s programs are designed to inspire audiences of all ages, nurture tomorrow’s musical talent, and harness the power of music to make a meaningful difference in people’s lives. An integral part of Carnegie Hall’s concert season, these programs facilitate creative expression, develop musical skills and capacities at all levels, and encourage participants to make lifelong personal connections to music. The Weill Music Institute generates new knowledge through original research and is committed to giving back to its community and the field, sharing an extensive range of online music education resources and program materials for free with teachers, orchestras, arts organizations, and music lovers worldwide. More than half a million people each year engage in WMI’s programs through national and international partnerships, in New York City schools and community settings, and at Carnegie Hall. This includes more than 450,000 students and teachers worldwide who participate in WMI’s Link Up music education program for students in grades 3 through 5, made possible through partnerships with over 110 orchestras in the US from Alaska to Florida, as well as internationally in Brazil, Canada, Colombia, Japan, Kenya, and Spain.

Thanks to the New York City Department of Homeless Services for supporting families at Family Concerts.

Lead funding for Musical Explorers has been provided by Fund II Foundation and Ralph W. and Leona Kern.

Tickets, priced at $10, are available at the Carnegie Hall Box Office, 154 West 57th Street, or can be charged to major credit cards by calling CarnegieCharge at 212-247-7800 or by visiting the Carnegie Hall website, carnegiehall.org.