Andrew Carnegie: His Life And Legacy

Presented as Part of Carnegie Hall’s Citywide Migrations: The Making of America Festival and the Andrew Carnegie Centennial 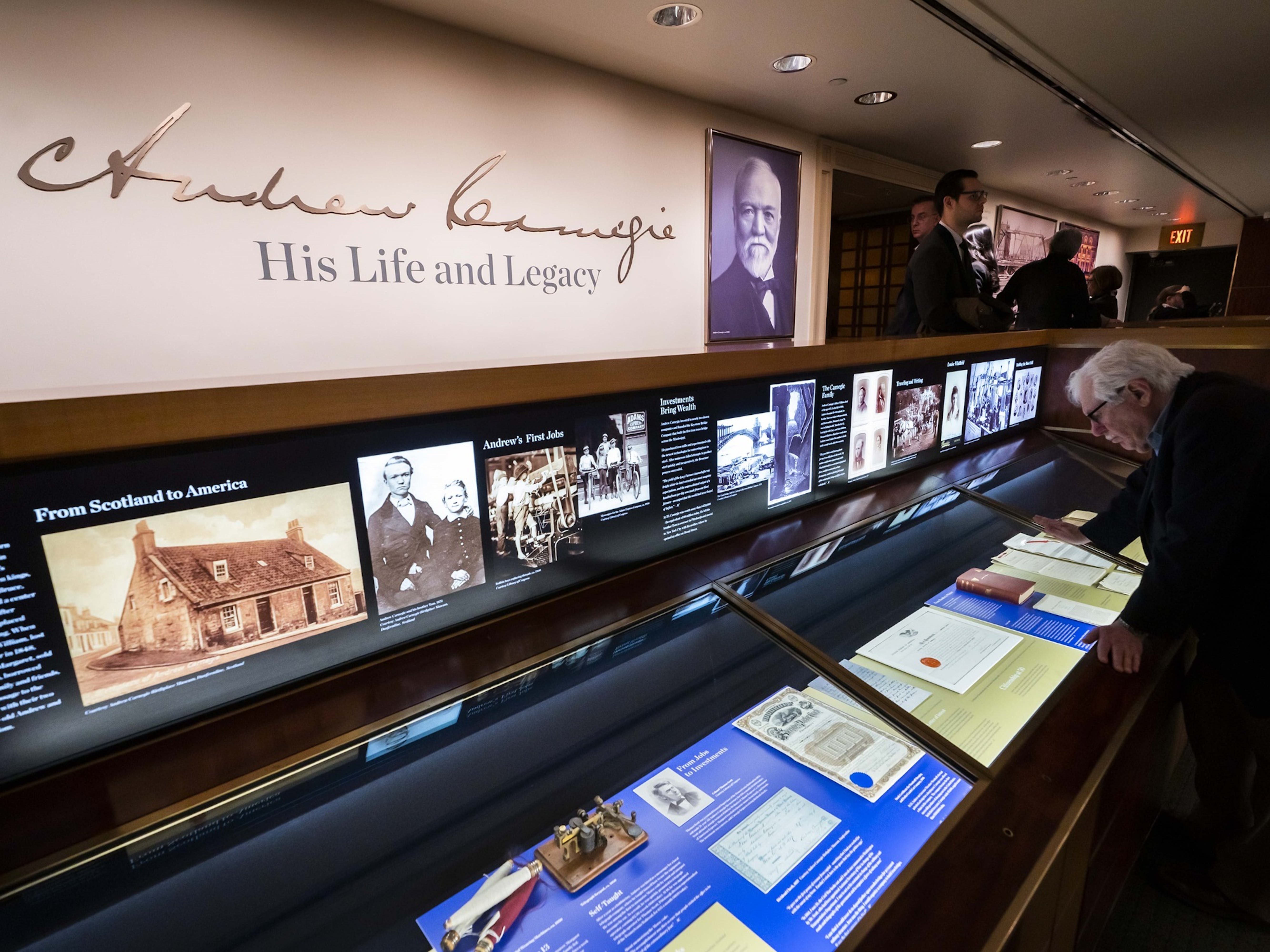 (New York, NY, May 29, 2019)—Now featured in Carnegie Hall’s Rose Museum: Carnegie Hall's first-ever exhibit about its visionary founder—Andrew Carnegie—charts the Carnegie family's passage from Scotland through the course of Andrew’s extraordinary life and ever-present influence in America. Titled Andrew Carnegie: His Life and Legacy, the exhibit—now open for free viewing daily on the second floor of Carnegie Hall—opened in March as part of Carnegie Hall’s citywide festival Migrations: The Making of America. The exhibit remains on display through October 2019 commemorating Andrew Carnegie’s centenary year. Please see below for summer hours.

With rarely seen archival documents, photos, and artifacts on loan from the Carnegie family; the Carnegie Corporation of New York and its archives at Columbia University; the Andrew Carnegie Birthplace Museum in Dunfermline, Scotland; the National Archives and Records Administration; the Carnegie Hero Fund; and more, the exhibit shows Carnegie’s journey from humble beginnings to becoming the most prominent philanthropist of his time.

“It is fitting, after more than 30 exhibitions in the Rose Museum since it opened in 1991, that we devote a retrospective to Andrew Carnegie’s life,” said Gino Francesconi, Director of Carnegie Hall’s Archives and Rose Museum, who curated the exhibit. “We’re honored to share items rarely on display that tell the story of Andrew’s passage from Scotland and how his contributions and philanthropy throughout his life changed America forever.”

Andrew Carnegie gave away more than $350 million during his lifetime—equivalent to nearly $7 billion today. His Carnegie Corporation of New York, the first philanthropic organization of its kind, inspired others that followed, including The Rockefeller Foundation (1913), The Ford Foundation (1936), The Andrew W. Mellon Foundation (1969), and The Giving Pledge (2010). The exhibit includes Andrew’s Certificate of Naturalization for United States Citizenship—issued on August 26, 1885 when he was 50 years old; the libretto from Carnegie Hall’s inaugural Music Festival in 1891; a page from the manifest of the ship that brought the Carnegie family to America; the 2017 Carnegie Medal of Philanthropy; and more.

Steel magnate Andrew Carnegie was inspired to build Carnegie Hall by his new bride, Louise, who sang with the Oratorio Society of New York. While on a honeymoon cruise to Scotland in 1887, Louise and Walter Damrosch—conductor of the Symphony Society of New York and the Oratorio Society, who was also on his way to Europe—asked Andrew to create a new home for music in New York City. The hall was designed by William Burnet Tuthill, a professional architect and cellist who had never built a concert hall before.

When the Hall’s cornerstone was laid in 1891, Carnegie proclaimed that “it is probable that this hall will intertwine itself with the history of our country.” This was true from the start when it opened on May 5, 1891 with a spectacular concert that featured famed Russian composer Pyotr Ilych Tchaikovsky conducting his own music in his American debut. Since then, its walls have echoed with applause not only for the greatest classical, jazz, and popular musicians, but also for the foremost comedians, authors, social crusaders, world figures, and orators of our time.

Funded by the Susan and Elihu Rose Foundation and opened in 1991, the Rose Museum chronicles Carnegie Hall’s history and exhibits its archival treasures to the public—including concert programs, photographs, autographed posters, musical manuscripts, and video. Open to the public for free daily, the museum’s exhibits tell the history of the landmark building and share stories about the legendary events that have made Carnegie Hall famous around the world.

Our thanks and appreciation to those listed below for making the Andrew Carnegie: His Life and Legacy exhibition possible:


Andrew Carnegie: His Life and Legacy is on view through October 31, 2019

Concert Season Hours: The Museum is open for free daily, 11:00AM—4:30PM, as the Hall’s schedule permits, as well as before concerts and during intermissions of presentations in Stern Auditorium / Perelman Stage. Summer Hours: Closed August 4 – September 15