Carnegie Hall Concerts by NYO Jazz with Sean Jones and Kurt Elling on July 27; NYO2 with Carlos Miguel Prieto and Gabriela Montero on July 30; and NYO-USA with Sir Antonio Pappano and Isabel Leonard on August 3 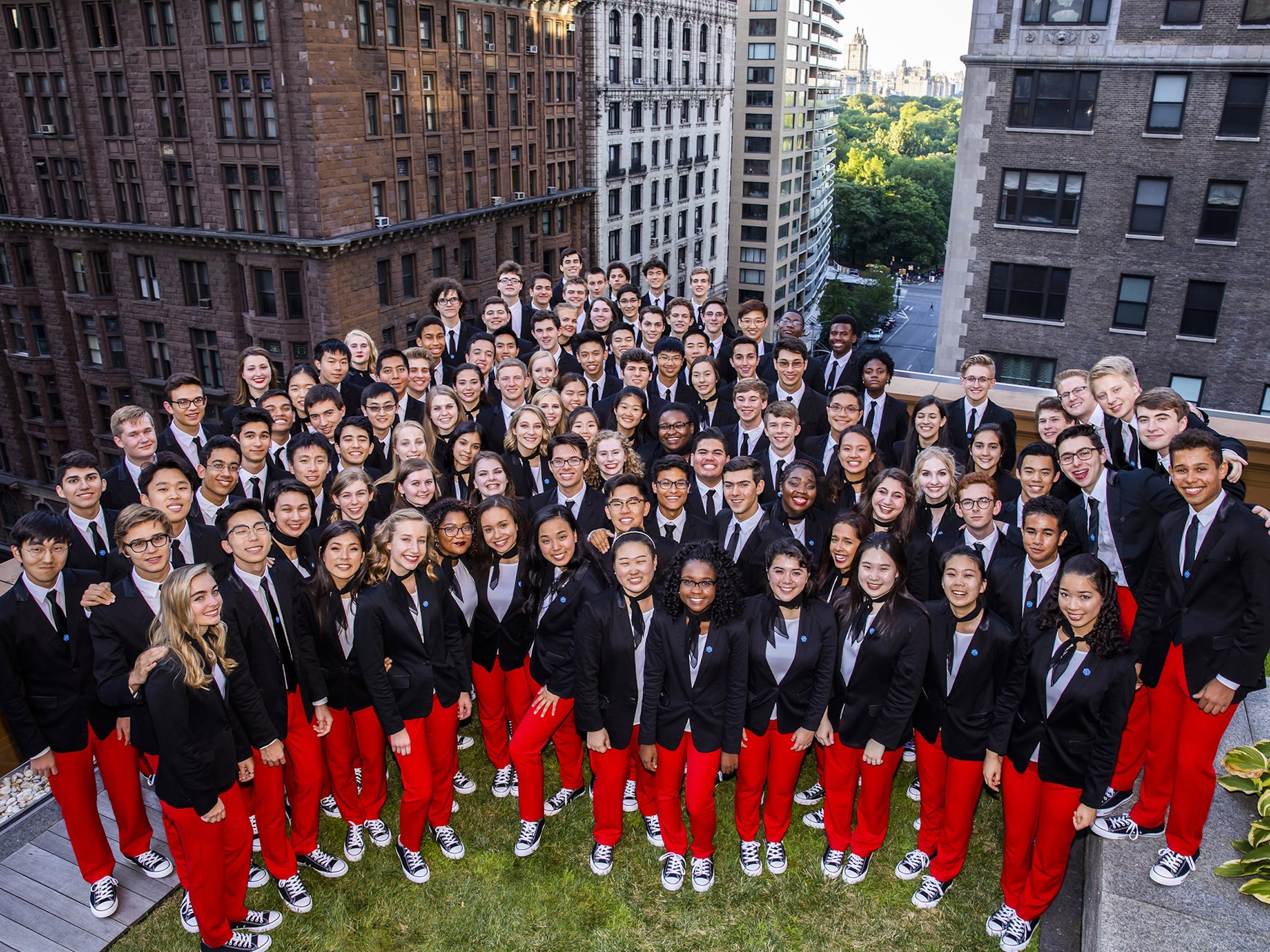 (June 11, 2019; NEW YORK, NY)—This July, Carnegie Hall will bring together more than 200 of the finest teen musicians from across the country to perform as part of its three acclaimed national youth ensembles: the National Youth Orchestra of the United States of America (NYO-USA), NYO2, and NYO Jazz. All three ensembles will take part in an intensive training residency at Purchase College, SUNY before performing at Carnegie Hall and embarking on tours across the country and around the world, serving as America’s dynamic musical ambassadors. In total, 222 musicians will take part in this year’s program, representing 39 US states plus Puerto Rico.

Since launching NYO-USA in 2013, Carnegie Hall has built on the program’s success by introducing two additional ensembles–NYO2, a sister orchestra for younger musicians, in 2016, and NYO Jazz, which returns this summer after a celebrated inaugural year. Each of these highly-selective programs—free to all participants—is dedicated to the proposition that talented young musicians thrive when they have the opportunity to expand their musical, social, and cultural horizons and share their artistry with audiences around the globe.

“We are thrilled to bring the musicians of NYO-USA, NYO2, and NYO Jazz together again for another extraordinary summer of music-making,” said Clive Gillinson, Carnegie Hall’s Executive and Artistic Director. “These three ensembles shine a spotlight on the great depth of musical talent found all across the country. Our musicians are superb players who are passionate about music and dedicated to connecting with people across cultures. We are inspired by their music-making and, when they travel the world, we couldn’t ask for better ambassadors for our country.”

Throughout their training residency at SUNY Purchase, NYO-USA and NYO2 musicians will work with leading players from America’s top professional orchestras, and NYO Jazz players will work with a stellar faculty comprised of some of the finest jazz artists on the scene today as they prepare for their annual Carnegie Hall performances and tours.

New music has always been a key component of the national youth ensembles. This summer, two new works written by NYO-USA’s 2019 apprentice composers Benjamin S. Beckman and Tyson J. Davis will be performed in the US and across Europe. The young composers will work with celebrated American composer Sean Shepherd, who was commissioned to write a new work, Magiya, for NYO-USA’s inaugural season in 2013, and serves as the composition program director and mentor/coach to the apprentices. NYO2’s concert program will include Gabriela Montero’s Piano Concerto No. 1, “Latin,” featuring the composer herself as soloist, while NYO Jazz will play a diverse program including new works by Ayn Inserto (commissioned by Carnegie Hall) and Jihye Lee and new arrangements by Igmar Thomas and Wycliffe Gordon, as they share this uniquely American music with international audiences. Additional repertoire highlights this summer include NYO-USA performing Strauss’s Eine Alpensinfonieand Berlioz’s Les nuits d'été, and NYO2 performing a program to include Stravinsky’s Pétrouchka.

On July 10, NYO2 musicians will arrive at Purchase College, joined on July 13 by their peers in NYO-USA and NYO Jazz. In addition to full ensemble rehearsals, the young musicians will take part in sectional rehearsals, master classes, private lessons, chamber music and combos, and other seminars on essential music skills.

During the residency, there will be opportunities for side-by-side rehearsals, mentorship, and exchange activities among the three ensembles, giving classical and jazz instrumentalists the chance to collaborate and learn from each other. On Saturday, July 20, all 200+ musicians will come together to rehearse a new arrangement of Miguel Zenón’s “Run with Jones”—which was premiered as part of last summer’s inaugural season of NYO Jazz—for orchestra and big band. The young musicians will also play excerpts from Grieg’sPeer GyntSuite Nos. 1 and 2 and the jazz versions created by Duke Ellington and Billy Strayhorn, and break out into smaller groups to improvise over a new blues tune written by NYO Jazz Artistic Director Sean Jones.

All three ensembles take the Carnegie Hall stage in the span of eight days, starting with NYO Jazz led by trumpeter Sean Jones and featuring vocalist Kurt Elling on Saturday, July 27 at 8:00 p.m., followed by NYO2 with Carlos Miguel Prieto and pianist Gabriela Montero on Tuesday, July 30 at 7:30 p.m., and concluding with NYO-USA conducted by Sir Antonio Pappano and featuring mezzo-soprano Isabel Leonard on Saturday, August 3 at 8:00 p.m.NYO-USA will also perform at Tanglewood Music Festival in Lenox, Massachusetts on Thursday, August 1.

Following NYO-USA’s Carnegie Hall performance, the orchestra travels to Europe, making its debut in Berlin with mezzo-soprano Dame Sarah Connolly, followed by debuts in Edinburgh and Hamburg as well as return performances at the BBC Proms and Concertgebouw with mezzo-soprano Joyce DiDonato. NYO Jazz will tour Asia for the first time, joined by vocalist Kurt Elling, with debut performances at the Kaohsiung Center for the Arts (Weiwuying), Beijing’s National Centre for the Performing Arts (NCPA), Jazz at Lincoln Center Shanghai, the Shanghai Oriental Art Center, Zhuhai Huafa & CPAA Grand Theatre, and Asia Society Hong Kong Center. And NYO2 returns to Miami Beach, Florida through a continued partnership with the New World Symphony, America’s Orchestral Academy (NWS) for a weeklong residency, including a performance at the New World Center with pianist Gabriela Montero. As part of their travel schedule, all three ensembles have the exciting opportunity to tour the cities in which they will be performing and engage with local musicians.

Click here for a video showing highlights of NYO-USA, NYO2, and NYO Jazz from summer 2018.

See below for more information about each ensemble’s residency and tour:

This summer’s NYO-USA is comprised of 119 members—ages 16–19 and hailing from 33 US states—who have been recognized by Carnegie Hall as being among the finest players in the country, following a comprehensive national audition process. This summer’s roster will feature 32 musicians from previous seasons as well as 22 musicians who gained experience through NYO2. Click here for a full list of musicians, including hometowns.

The orchestra then departs to Europe for debut performances as part of the Young Euro Classic series at Konzerthaus Berlin (August 6) with mezzo-soprano Dame Sarah Connolly, as well as the Edinburgh International Festival (August 9) and Elbphilharmonie Hamburg (August 14), and a return to the BBC Proms (August 11) and Royal Concertgebouw Amsterdam (August 13) with mezzo-soprano Joyce DiDonato. Select concerts will feature Prokofiev’s Symphony No. 5 in place of Strauss’s Eine Alpensinfonie, giving the young musicians the opportunity to perform two ambitious symphonies.

NYO-USA first performed at the BBC Proms during the orchestra’s inaugural year in 2013, receiving stellar reviews:


“With their debut this week it already seems safe to say that the future of classical music in America is stronger than it was even one month ago!” —The Times, London


The NYO-USA concerts will also include new works written for the orchestra by apprentice composers Benjamin S. Beckman from Los Angeles, California and Tyson J. Davis from Winston-Salem, North Carolina. Beckman’s piece, Occidentalis, will be premiered at Tanglewood on August 1, and will also be performed as part of a live BBC Proms broadcast in London (August 11) and at the Royal Concertgebouw Amsterdam (August 13). Davis’s piece, Delicate Tension, commemorates the 30th anniversary of the fall of the Berlin Wall, and will receive its premiere at Konzerthaus Berlin on August 6. The work will also be performed at the Edinburgh International Festival (August 9) and Elbphilharmonie Hamburg as part of a live medici.tv webcast (August 14).

The 80 members of NYO2 2019—ages 14–17 and coming from 30 US states plus Puerto Rico—have been recognized as exceptionally talented musicians who not only embody a very high level of artistry, but who also come from a wide range of backgrounds, representing a bright future for American orchestral music. Twenty musicians will be returning to NYO2 from past seasons, and 22 prior members of NYO2 have been accepted for NYO-USA this summer. Click here for the full list of NYO2 musicians, including hometowns.

Joseph Young, the newly-appointed Music Director of the Berkeley Symphony, returns as NYO2’s resident conductor, and the students will also have the opportunity to work with James Ross and leading players from professional orchestras across the country. Click here for a full list of NYO2 guest artists and faculty.

For the second time, the musicians of NYO2 will travel to Miami Beach for a weeklong residency made possible through a continued partnership with the New World Symphony, America’s Orchestral Academy (NWS). As part of their training, NYO2 players will work with NWS Fellows leading up to a performance at the New World Center led by conductor Carlos Miguel Prietoon Saturday, July 27 at 8:30 p.m. The program includes Stravinsky’s Pétrouchka, selections from Falla’s The Three-Cornered Hat, and Gabriela Montero’s Piano Concerto No. 1, “Latin,” featuring the composer as soloist.

The New World Center concert will be made available to the community for free via WALLCAST®, with the full performance viewable outdoors in SoundScape Park on the 7,000-square-foot projection wall of the building. During their time in Miami, the NYO2 members will also have opportunities to interact with local young musicians in the South Florida area through NWS community partner organizations, playing and learning side-by-side with one another.

Following their Miami residency, the NYO2 musicians return to New York for a culminating performance at Carnegie Hall on Tuesday, July 30 at 7:30 p.m.

NYO Jazz returns in 2019 for its second year, following a triumphant inaugural year during which the ensemble played to sold-out houses and received rave reviews. The 23 members of NYO Jazz 2019—ages 16–19 and representing 15 US states—have been recognized by Carnegie Hall as being among the finest jazz players in the country following a comprehensive and highly selective audition process. Click here for the full list of NYO Jazz musicians, including hometowns.

Program to include works by Dizzy Gillespie, Don Ellis, Thad Jones, and Mary Lou Williams, a new work by Ayn Inserto commissioned by Carnegie Hall, a new composition by Jihye Lee, and new arrangements by Igmar Thomas and Wycliffe Gordon.

Tickets, priced at $25, are available at the Carnegie Hall Box Office, 154 West 57th Street, or can be charged to major credit cards by calling CarnegieCharge at 212-247-7800 or by visiting the Carnegie Hall website, carnegiehall.org

For anyone 18 years old or younger, $10 tickets are available by calling CarnegieCharge at 212-247-7800 or visiting the Carnegie Hall Box Office. $10 youth tickets are not available online.

In addition, for all Carnegie Hall presentations in Stern Auditorium/Perelman Stage, a limited number of partial view (seats with obstructed or limited sight lines or restricted leg room) will be sold for 50% of the full price. For more information on this and other discount ticket programs, including those for students, Notables members, and Bank of America customers, visitcarnegiehall.org/discounts. Artists, programs, and prices are subject to change.