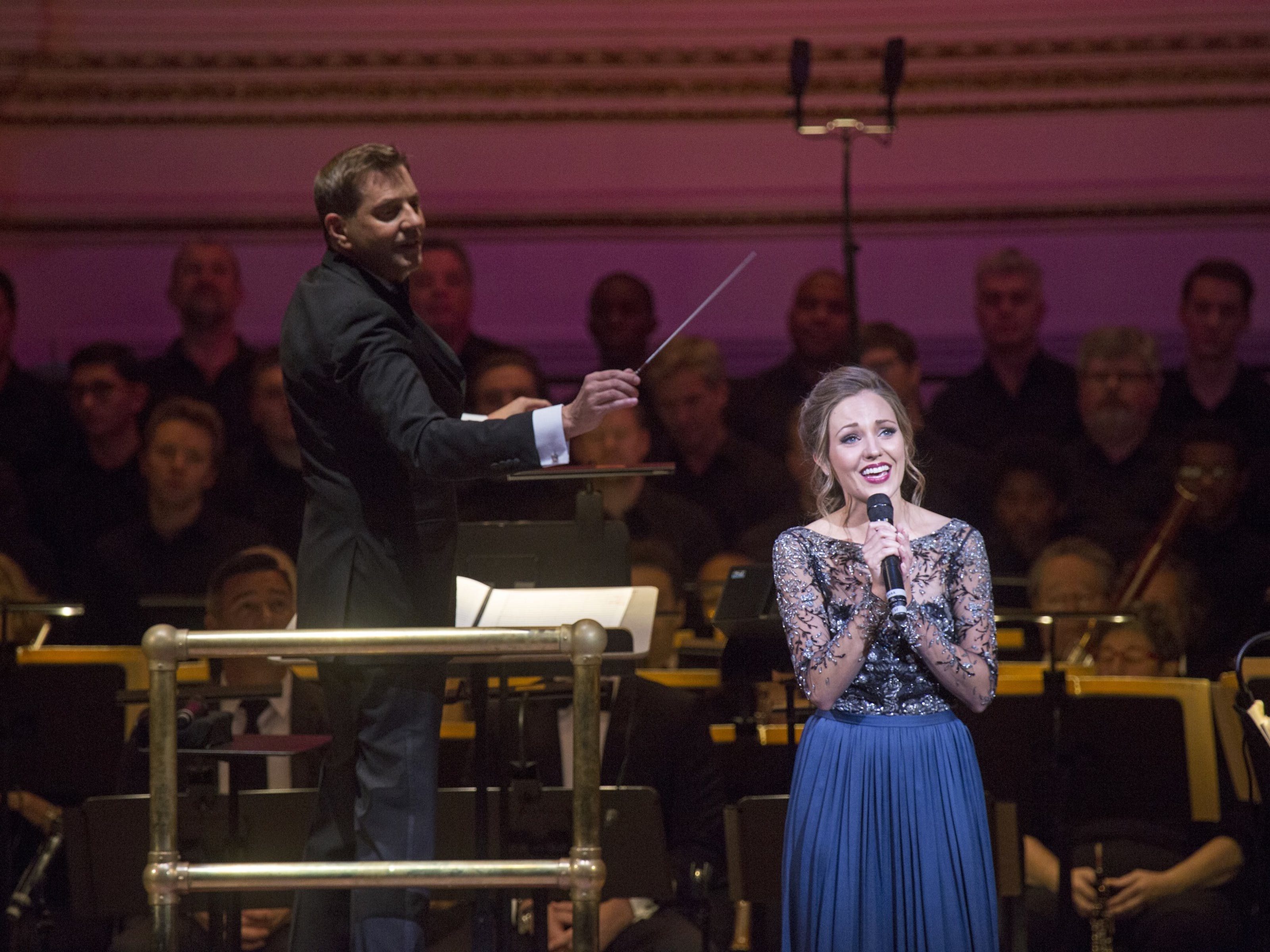 (New York, NY, March 11, 2019)—Carnegie Hall today announced that Broadway star Laura Osnes has agreed to join an acclaimed line-up of vocalists— Mykal Kilgore, Storm Large, and Ryan Silverman—and The New York Pops, led by Music Director Steven Reineke, for a program titled Movie Mixtape: Songs from the Silver Screen on Friday, March 15 at 8:00 p.m. in Stern Auditorium / Perelman Stage. Ms. Osnes steps in for Ashley Park who must unfortunately withdraw from this performance due to a scheduling conflict.

Carnegie Hall audiences may remember Laura Osnes—star of Broadway’s Grease, Rodgers + Hammerstein’s Cinderella and Bandstand—from her 2012 performance as Maria in the Hall’s concert version of The Sound of Music, as well as from many previous appearances with The New York Pops. Ticketholders with any questions should contact CarnegieCharge at (212) 247-7800.

About the Artists
Steven Reineke has established himself as one of North America’s leading conductors of popular music. This season, Mr. Reineke celebrates his tenth anniversary as Music Director of The New York Pops at Carnegie Hall. Additionally, he is Principal Pops Conductor of the National Symphony Orchestra at the John F. Kennedy Center for the Performing Arts and Principal Pops Conductor of the Houston and Toronto symphony orchestras. Reineke is a frequent guest conductor with The Philadelphia Orchestra and his extensive North American conducting appearances include Atlanta, Cincinnati, Edmonton, San Francisco and Sarasota. On stage, Mr. Reineke has created programs and collaborated with a range of leading artists from the worlds of hip hop, Broadway, television and rock including Common, Kendrick Lamar, Nas, Sutton Foster, Megan Hilty, Cheyenne Jackson, Wayne Brady, Peter Frampton and Ben Folds, among others. In 2017, National Public Radio’s “All Things Considered” featured Mr. Reineke leading the National Symphony Orchestra performing live music excerpts between news segments — a first in the show’s 45-year history. In 2018, he led the National Symphony Orchestra with hip hop legend Nas performing his seminal album Illmatic on PBS's Great Performances. As the creator of more than 100 orchestral arrangements for the Cincinnati Pops Orchestra, Mr. Reineke’s work has been performed worldwide and can be heard on numerous Cincinnati Pops Orchestra recordings on the Telarc label. His symphonic works Celebration Fanfare, Legend of Sleepy Hollow, and Casey at the Bat are performed frequently. His Sun Valley Festival Fanfare was used to commemorate the Sun Valley Summer Symphony’s pavilion, and his Festival Te Deum and Swan’s Island Sojourn were debuted by the Cincinnati Symphony and Cincinnati Pops. His numerous wind ensemble compositions are published by the C.L. Barnhouse Company and are performed by concert bands worldwide.

The New York Pops is the largest independent pops orchestra in the United States and the only professional symphonic orchestra in New York City specializing in popular music. Under the dynamic leadership of Music Director and Conductor Steven Reineke, The New York Pops continues to re-imagine orchestral pops music. The orchestra performs an annual subscription series and birthday gala at Carnegie Hall and a summer series at Forest Hills Stadium in Queens, NY. The New York Pops is dedicated to lifelong learning and collaborates with public schools, community organizations, children’s hospitals and senior centers throughout the five boroughs of New York City. PopsEd allows thousands of New Yorkers of all ages and backgrounds to participate in fully customizable music programs that blend traditional education with pure fun.

Program to include:
RICHARD WHITING "Hooray for Hollywood" from Hollywood Hotel
IRVING BERLIN "Blue Skies" from The Jazz Singer
HAROLD ARLEN / YIP HARBURG "Over the Rainbow" from The Wizard of Oz
HAROLD ARLEN / IRA GERSHWIN "The Man that Got Away" from A Star Is Born
HENRY MANCINI / JOHNNY MERCER "Moon River" from Breakfast at Tiffany’s
RICHARD RODGERS / OSCAR HAMMERSTEIN II "The Sound of Music" from The Sound of Music
ALAN BERGMAN / MARILYN BERGMAN / MARVIN HAMLISCH "The Way We Were" from The Way We Were
PAUL WILLIAMS / KENNETH ASCHER "The Rainbow Connection" from The Muppet Movie
KENNY LOGGINS / DEAN PITCHFORD "Footloose" from Footloose
ALAN MENKEN / HOWARD ASHMAN "Part of Your World" from The Little Mermaid
GLEN HANSARD / MARKÉTA IRGLOVÁ "Falling Slowly" from Once
ADELE ADKINS / PAUL EPWORTH "Skyfall" from Skyfall

Tickets, priced at $40–$145, are available at the Carnegie Hall Box Office, 154 West 57th Street, or can be charged to major credit cards by calling CarnegieCharge at 212-247-7800 or by visiting the Carnegie Hall website, carnegiehall.org.