Live Performances by Mwenso and the Shakes 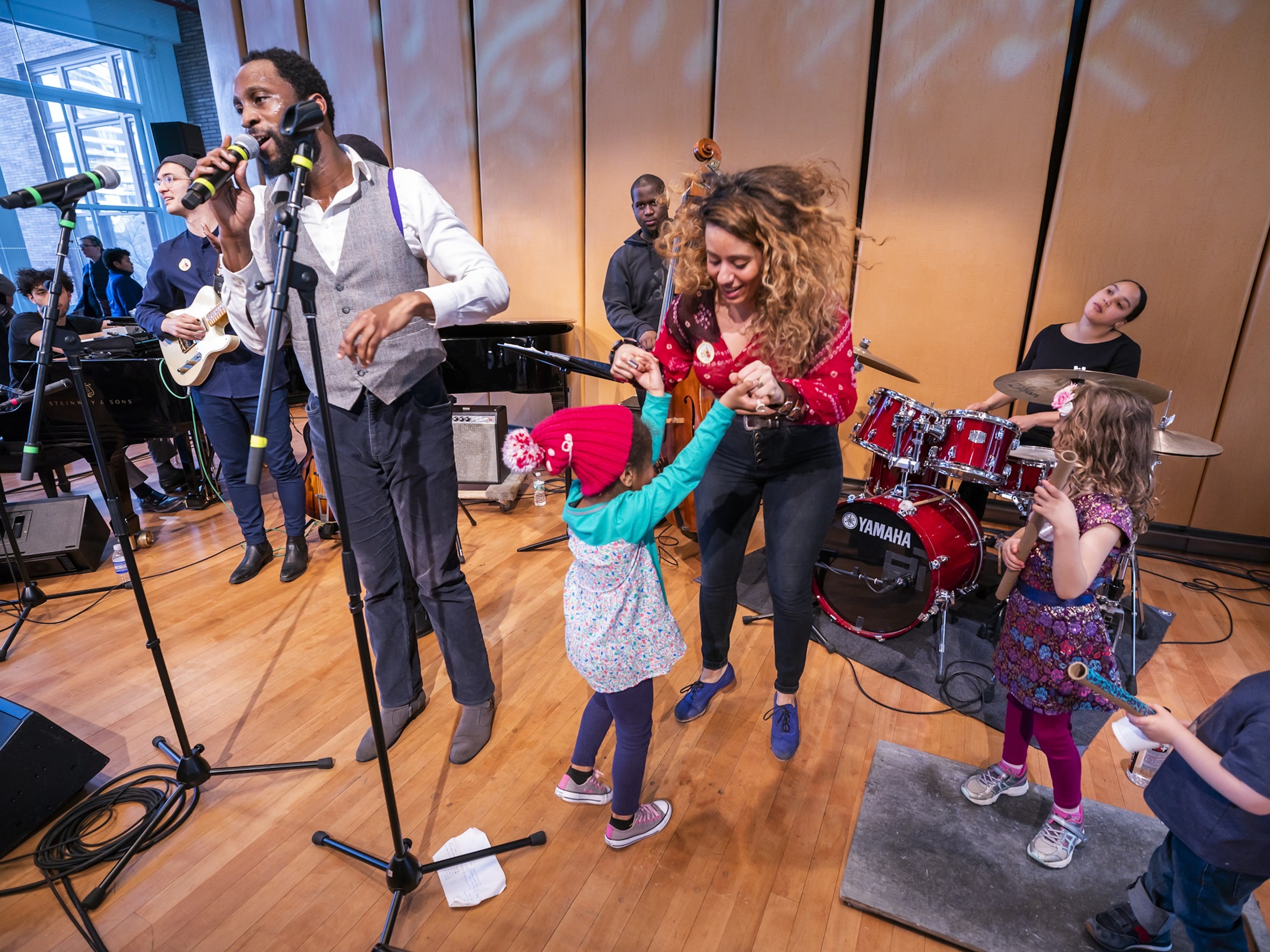 On Sunday, April 7 from 12–4 p.m., children and families will celebrate the Harlem Renaissance as part of Spring Family Day in Carnegie Hall’s Resnick Education Wing. This musical open house, inspired by Carnegie Hall’s citywide Migrations: The Making of America festival, includes all sorts of fun and free activities exploring how Harlem became a hub for African American artistic expression. The day will be highlighted by interactive performances from Mwenso and the Shakes, and kids will also have the chance to build their own instruments, write and perform their own poetry, dance, sing, and create Harlem collages. Admission is granted on a first-come, first-served basis, and families are welcome to drop by for a visit or stay throughout the day for a musical adventure of their choice.

Welcome Center
Before participants start their journey, they can enjoy the elegant moves of Dancing Classrooms Youth Dance Company, who will perform dance steps popular during the Harlem Renaissance.


Josephine’s Nightclub
Mwenso and the Shakes, a Harlem-based musical group, will honor the music of the Harlem Renaissance and explore works inspired by it. Participants will join these global musicians on a journey through the music of Harlem. From the Charleston to swing, participants will learn some basic steps famous during the Harlem Renaissance with Dancing Classrooms. After, they will incorporate those dances into the performance of Mwenso and the Shakes.


Duke’s Music Studio
Participants will harness their imaginations and follow a jazz band on a journey through Harlem during its Renaissance. Through an interactive musical story, audience members will be immersed in the sounds of dance halls, jazz clubs, and more. Participants are encouraged to enhance the story with their own movements and voices!


Louis’ Instrument Workshop
Families will have the chance to build and perform on trombones and sandblocks from recycled materials in this hands-on activity with Bash the Trash. There will also be interactive performances by the Bash the Trash ensemble.


Langston’s Writing Room
Participants will create poems inspired by the work of Langston Hughes and other poets, and then have a chance to perform their poetry in an informal poetry slam.

About Migrations: The Making of America
Carnegie Hall’s citywide festival Migrations: The Making of America traces how large-scale movements of people—both to and within our country—have helped shape American arts, culture, and society. The festival features over 100 events, with musical programming at Carnegie Hall and public programming, performances, exhibitions, and other events at more than 75 leading cultural and academic institutions across New York City and beyond.


About Carnegie Hall’s Weill Music Institute
Carnegie Hall’s Weill Music Institute (WMI) creates visionary programs that embody Carnegie Hall’s commitment to music education, playing a central role in fulfilling the Hall’s mission of making great music accessible to as many people as possible. With unparalleled access to the world’s greatest artists, WMI’s programs are designed to inspire audiences of all ages, nurture tomorrow’s musical talent, and harness the power of music to make a meaningful difference in people’s lives. An integral part of Carnegie Hall’s concert season, these programs facilitate creative expression, develop musical skills and capacities at all levels, and encourage participants to make lifelong personal connections to music. The Weill Music Institute generates new knowledge through original research and is committed to giving back to its community and the field, sharing an extensive range of online music education resources and program materials for free with teachers, orchestras, arts organizations, and music lovers worldwide. More than half a million people each year engage in WMI’s programs through national and international partnerships, in New York City schools and community settings, and at Carnegie Hall. This includes 450,000 students and teachers worldwide who participate in WMI’s Link Up music education program for students in grades 3 through 5, made possible through Carnegie Hall partnerships with over 110 orchestras in the US from Alaska to Florida, as well as internationally in Brazil, Canada, China, Colombia, Japan, Kenya, and Spain.

Thanks to the New York City Department of Homeless Services for supporting families during Family Days.

Family Days are generously supported, in part, by an endowment gift from Linda and Earle S. Altman.