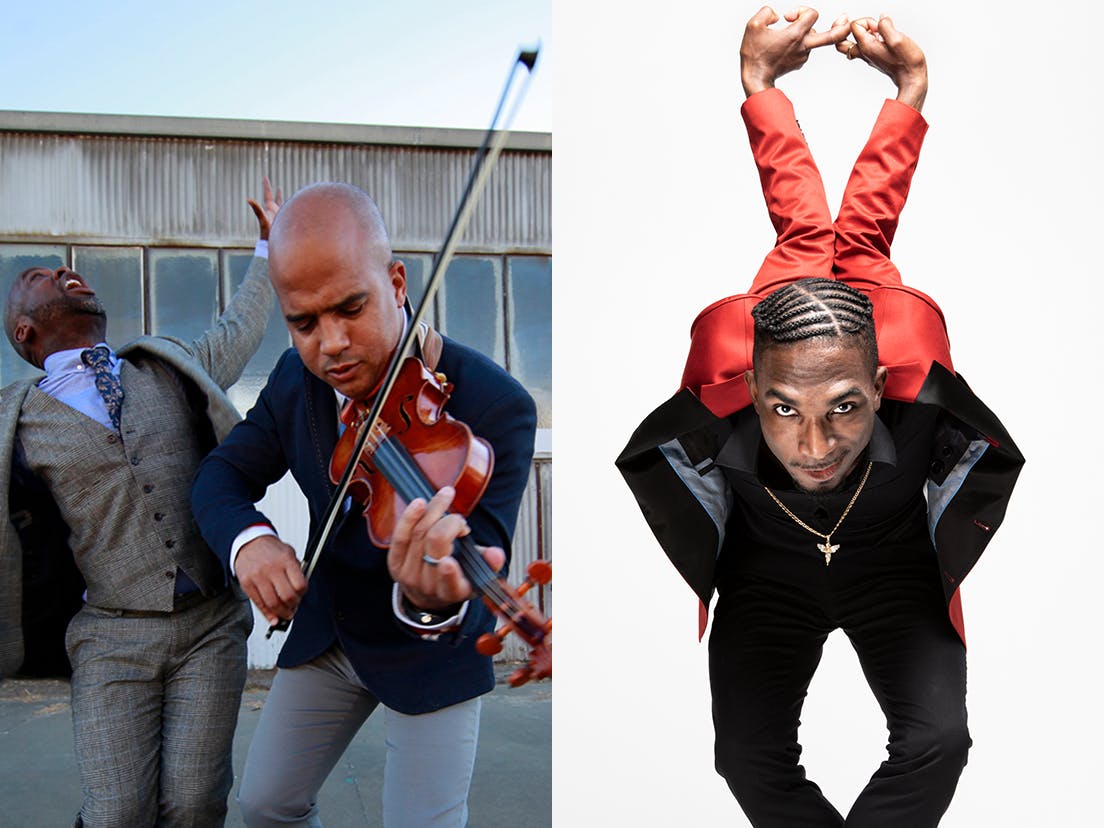 (New York, NY, January 31, 2019) Carnegie Hall today announced that street dance pioneer Drew Dollaz will join longtime collaborators spoken word artist Marc Bamuthi Joseph and composer/violinist Daniel Bernard Roumain as they reunite for the world premiere of The Just and the Blind, a pressing and poignant new work commissioned by Carnegie Hall that explores fatherhood, racial profiling, and the justice system, in Zankel Hall on Tuesday, March 5, 2019 at 6:30 p.m. The performance will be followed by a post-concert discussion with the artists, hosted by Justus Jones of the Arts for Incarcerated Youth Network (AIYN).

Conceived and written by Joseph with original music by Roumain, the duo draws on their own personal experiences of fatherhood to create The Just and the Blind, illuminating the un- and under-heard experiences of youth who are incarcerated and the realities their families face. Framed by visually striking photography and animation projections, the performance explores racial profiling and the prison-industrial complex in a series of short vignettes that include music, dance, and spoken word. The creative team also includes Michael John Garcés (director), David Szlasa (projection designer), Lisa Armstrong (investigative journalist), Xia Gordon (animator), and Brittsense (photographer).

Roumain and Joseph most recently collaborated on We Shall Not Be Moved, a chamber opera co-commissioned by Opera Philadelphia and the Apollo Theater, directed by Bill T. Jones, which The New York Times called one of the “the best classical music performances of 2017.”

The Just and the Blind is commissioned by Carnegie Hall as part of its 125 Commissions Project. The work will be presented during the 2019 Create Justice forum at Carnegie Hall, which runs from March 5 – 6, 2019. An initiative founded in 2017 by Carnegie Hall and the Arts for Incarcerated Youth Network (AIYN) in Los Angeles, Create Justice annually brings together a diverse group of artists, young people, policymakers, funders, nonprofits, and researchers from all across the country to share ideas and work side-by-side to leverage the power of the arts for youth justice and reform. As part of its mission, Create Justice is committed to commissioning new work that illuminates the ongoing conversations around youth justice reform, arts engagement, and cultural equity.

About the Artists
Spoken word artist, activist, and speaker Marc Bamuthi Joseph is a curator of words, ideas, and protagonists. Joseph’s bold, poetically-driven work investigates social issues and cultural identity. He is a steadfast believer in empathy as the most valuable currency in building community, and seeks to spark curiosity and dialogue about freedom, compassion, and fearlessness through pioneering arts stewardship and education. A 2017 TEDGlobal Fellow, Joseph graced the cover of Smithsonianmagazine as one of America’s Top Young Innovators in the Arts and Sciences, artistically directed HBO’s “Russell Simmons presents Brave New Voices,” and is an inaugural recipient of the United States Artists Rockefeller Fellowship, which annually recognizes 50 of the country’s greatest living artists. Dance magazine named him a Top Influencer in 2017.

Joseph’s evening-length work red black and GREEN: a blues was nominated for a 2013 Bessie Award for “Outstanding Production (of a work stretching the boundaries of a traditional form)” and he has won numerous grants, including from the National Endowment for the Arts and Creative Capital Foundation. His latest touring work /peh-LO-tah/ is inspired by soccer and Joseph’s first-generation American experience, intersecting global economics, cross-border fan culture, and the politics of joy. Recent commissions include the libretto for Home in 7 for the Atlanta Ballet and theater work for South Coast Repertory Theater. He recently collaborated with composer Daniel Bernard Roumain on a new opera co-commissioned and produced by Opera Philadelphia, New York’s Apollo Theater and London’s Hackney Empire, which premiered under the direction of Bill T. Jones in October 2017.

Joseph is the founding Program Director of the exemplary non-profit Youth Speaks, and is a co-founder of Life is Living, a national series of one-day festivals that activate under-resourced parks and affirm peaceful urban life. His essays have been published in Harvard Education Press; he has lectured at more than 200 colleges, has carried adjunct professorships at Stanford and Lehigh universities, among others, and currently serves as Vice President and Artistic Director of Social Impact at the John F. Kennedy Center for the Performing Arts in Washington, DC.

Daniel Bernard Roumain’s acclaimed work as a composer and performer spans more than two decades, and has been commissioned by venerable artists and institutions worldwide. Described as "about as omnivorous as a contemporary artist gets" (The New York Times), he is perhaps the only composer whose collaborations traverse the worlds of Philip Glass, Bill T. Jones, Savion Glover, and Lady Gaga.

Known for his signature violin sounds infused with a myriad of electronic and urban music influences, Roumain takes his genre-bending music beyond the proscenium. He has been nominated for an Emmy Award for Outstanding Musical Composition for his work with ESPN; featured as keynote performer at technology conferences; and written large scale, site-specific music for public parks.

He made his Carnegie Hall debut in 2000 with the American Composers Orchestra performing his Harlem Essay for Orchestra, a Whitaker commission, and has gone on to compose works for the Boston Pops Orchestra; Carnegie Hall; the Library of Congress; the Stuttgart Radio Symphony Orchestra, and myriad others.

Roumain’s commitment to arts education has garnered long-term relationships with countless universities, orchestras, and performing arts centers. He earned his doctorate in music composition from the University of Michigan. He is currently Institute Professor of Practice at Arizona State University.

An avid arts industry leader, Roumain serves on the board of directors of the League of American Orchestras, Association of Performing Arts Presenters (APAP), and Creative Capital, the advisory committee of the Sphinx Organization, and was co-chair of the 2015 and 2016 APAP conferences.

Drew Dollaz is a pioneer of flexing, a Brooklyn-based genre of street dance also referred to as bone breaking, which is characterized by rhythmic contortionist movements. A self-taught dancer, Dollaz is known for blending flexing with other styles including ballet to create a transcendent hybrid of movement artistry.

Dollaz has performed and partnered with a broad range of artists and brands, including Madonna, Rihanna, Skrillex, Red Bull, Sony, Aloft Hotels, and Billboard. His performances on Madonna’s MDNA tour in 2012 marked the first time flexing appeared on the world stage. Next Level Squad, a New York City collective of flexing dancers in which Dollaz performs and choreographs, has garnered more than a million views on YouTube and has been featured on World of Dance, The Breakin’ Convention, and America’s Got Talent. He recently completed his short dance film En Pointe and looks forward to the release of his acting debut in a feature length film.

Arts education and youth empowerment are core tenets of Dollaz’ work and he currently mentors young dancers and teaches internationally.

The Just and the Blind is presented as part of the 2019 Create Justice Forum.

The Just and the Blind is produced by Sozo Artists, Inc., in partnership with the Sozo Impact Fund and its fiscal sponsor, Silicon Valley Community Foundation.

Lead funding for Create Justice is provided by The Kresge Foundation, The Andrew W. Mellon Foundation, and an anonymous donor.

Major funding for Create Justice is provided by Ameriprise Financial and MetLife Foundation.

Tickets, priced at $25, are now on sale at the Carnegie Hall Box Office, 154 West 57th Street, or can be charged to major credit cards by calling CarnegieCharge at 212-247-7800 or by visiting the Carnegie Hall website, carnegiehall.org.