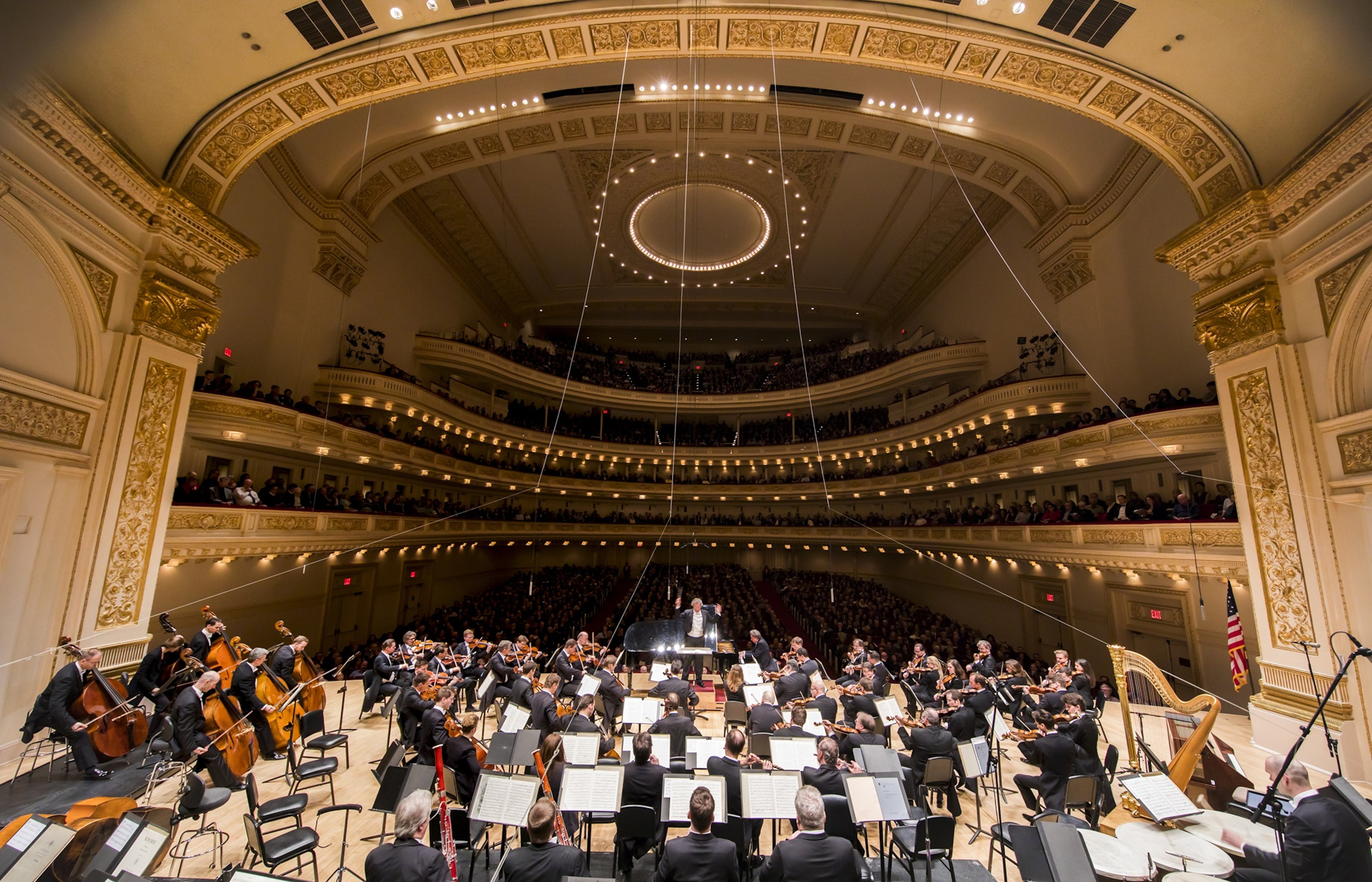 (New York, NY, January 22, 2019) The Vienna Philharmonic Orchestra, returns to Carnegie Hall for four concerts in March in Stern Auditorium / Perelman Stage. The first two programs, conducted by Ádám Fischer, include Bartók’s Two Pictures and Beethoven’s LeonoreOverture No. 3 and Symphony No. 3, “Eroica” on Saturday, March 2 at 8:00 p.m. Maestro Fisher returns the following afternoon, Sunday, March 3 at 2:00 p.m. with Haydn’s Symphony No. 97 and Mozart’s Violin Concerto No. 5, "Turkish" featuring Leonidas Kavakos along with Mozart’s Symphony No. 41, “Jupiter.”

About the Artists
Greek violinist Leonidas Kavakos is recognized as an artist of rare quality, known for his virtuosity, superb musicianship, and the integrity of his playing. By age 21, Mr. Kavakos had won three major competitions: the 1985 Sibelius Violin Competition, and 1988 Paganini and Naumburg international violin competitions. He was the first musician to record the original Sibelius Violin Concerto of 1903–1904, which won the 1991 Gramophone Award for Concerto of the Year.

Over the years, Mr. Kavakos has developed close relationships with some of the most prestigious orchestras and conductors. In 2017–2018, he was artist-in-residence at both Amsterdam’s Concertgebouw and Vienna’s Musikverein. This season at Carnegie Hall he has appeared with Michael Tilson Thomas and the San Francisco Symphony and returns in recital with Yuja Wang in February 2019.

Mr. Kavakos is the 2014 Gramophone Artist of the Year and 2017 winner of the Léonie Sonning Music Prize. He plays the 1734 “Willemotte” Stradivarius violin.

Igor Levit is the Royal Philharmonic Society’s Instrumentalist of the Year and the 2018 recipient of the Gilmore Artist Award. In October 2018, Sony Classical released Life, Mr. Levit’s highly anticipated fourth album for the label, which features works by Bill Evans, Bach, Busoni, Liszt, Wagner, Rzewski, and Schumann. Mr. Levit brings this program and others this season to the Lucerne Festival, San Francisco Performances, Lisbon’s Calouste Gulbenkian Foundation, and Berlin’s Philharmonie. He also appears in recital in Vienna, Hamburg, Munich, Antwerp, Liège, and Dresden. Mr. Levit makes his Paris and Tokyo recital debuts in the spring of 2019, followed by three recitals at London’s Wigmore Hall.

Born in Russia, Mr. Levit moved to Germany with his family at the age of eight. He completed his piano studies at Hanover University of Music, Drama, and Media in 2009 with the highest academic and performance scores in the history of the school. Mr. Levit has studied under the tutelage of Karl-Heinz Kämmerling, Matti Raekallio, Bernd Goetze, Lajos Rovátkay, and Hans Leygraf. As the youngest participant in the 2005 Arthur Rubinstein International Piano Master Competition in Tel Aviv, Mr. Levit won the Silver Prize, the Audience Prize, and prizes for the best performance of chamber music and contemporary music. Mr. Levit lives in Berlin and plays on a Steinway Model D concert grand piano, kindly given to him by the trustees of Independent Opera at Sadler’s Wells.

Ádám Fischer is principal conductor of the Düsseldorfer Symphoniker and artistic consultant of the Tonhalle Düsseldorf. He is principal conductor of the Danish Chamber Orchestra, conductor laureate of the Austrian-Hungarian Haydn Philharmonic—which he founded—as well as founder of the Haydn Festspiele in Eisenstadt and founder and leader of the Budapest Wagner days. Born in Budapest in 1949, Ádám Fischer studied composition and conducting in Budapest and with Hans Swarowsky in Vienna. After having been first Kapellmeister in Helsinki, Karlsruhe and at the Bayerische Staatsoper in Munich, he became GMD in Freiburg, Kassel, Mannheim and artistic director at the Hungarian State Opera in Budapest. Regular performances lead him to the greatest opera houses in Europe and the US, including the Wiener Staatsoper, La Scala in Milan, Bayerische Staatsoper, Covent Garden, Metropolitan Opera, Bayreuther Festspiele. He regularly works with leading orchestras, such as the Wiener Philharmoniker, Wiener Symphoniker, Münchner Philharmoniker, Orchestre de Paris, London Philharmonic Orchestra, Orchestra of the Age of Enlightenment, Chicago and Boston symphony orchestras, and HNK Symphony. Maestro Fischer made his Carnegie Hall debut leading the Hungarian National Philharmonic in 1985 and these concerts mark his first appearances at the hall since then.

Conductor, composer, and educator Michael Tilson Thomas curates his second Perspectives series at Carnegie Hall during the 2018–2019 season, leading four orchestras over seven concerts that reflect his multifaceted career and commitment to shaping the future of classical music. The series features music by composers he has long championed, as well of his own recent compositions, performed by artists with whom he frequently collaborates. Mr. Tilson Thomas kicked off his Perspectives in July 2018, when he led the National Youth Orchestra of the United States of America in Stern Auditorium / Perelman Stage as well as on its five-city tour to Asia, joined by pianist Jean-Yves Thibaudet. He returned to open the Carnegie Hall 2018–2019 season with the San Francisco Symphony in October over two concerts. His Perspectives series culminates in May with two performances with the New World Symphony, the orchestral academy he co-founded to prepare the most gifted graduates of America’s conservatories for leadership roles in professional orchestras and ensembles. Both concerts feature fellow Carnegie Hall Perspectives artist and longtime colleague and friend, pianist Yuja Wang. Wang is soloist for Prokofiev’s Piano Concerto No. 5 on the first program which also includes the New York premiere of a new work by Julia Wolfe, co-commissioned by Carnegie Hall, and Berlioz’s Symphony fantastique (May 1, 2019). The following evening in Zankel Hall, Ms. Wang plays a work for solo piano written by Mr. Tilson Thomas. Also on the program is the New York premiere of Tilson Thomas’s Four Preludes on Playthings of the Wind, written for and featuring soprano Measha Brueggergosman (May 2, 2019).

Michael Tilson Thomas made his Carnegie Hall debut nearly 50 years ago, leading the Boston Symphony Orchestra in 1969. With this Perspectives series, he celebrates more than 100 performances at Carnegie Hall. He is music director of the San Francisco Symphony; co-founder and artistic director of the New World Symphony, America’s Orchestral Academy; and conductor laureate of the London Symphony Orchestra. In addition to conducting the world’s leading orchestras, Mr. Tilson Thomas is also noted for his work as a composer and a producer of multimedia projects that are dedicated to music education and reimagining the concert experience. His compositions have been performed around the world, many premiering at Carnegie Hall during his first Perspectives series (2003–2005). He was also artistic director of Carnegie Hall’s 2011–2012 American Mavericks series in which he conducted the San Francisco Symphony in music by groundbreaking American composers. He has won 11 Grammy Awards for his recordings, is the recipient of the National Medal of Arts, and is a Chevalier dans l’ordre des Arts et des Lettres of France.

There is perhaps no other musical ensemble more consistently and closely associated with the history and tradition of European classical music than the Vienna Philharmonic Orchestra. Since its inception by Otto Nicolai in 1842, the fascination that the orchestra has held for prominent composers and conductors, as well as for audiences all over the world, is based not only on a homogenous musical style carefully bequeathed from one generation to the next, but also on its unique history and structure. The foremost ruling body of the organization is the orchestra itself. In accordance with Philharmonic statutes, only a member of the Vienna State Opera Orchestra can become a member of the Vienna Philharmonic. Before joining the Philharmonic, one must first audition for a position with the State Opera Orchestra and then successfully complete a three year period before becoming eligible to submit an application for membership in the association of the Vienna Philharmonic.

The Vienna Philharmonic performs approximately 110 concerts every season at home, presents Vienna Philharmonic Weeks in New York and Japan, and has participated in the Salzburg Festival since 1922. The orchestra makes yearly guest appearances in leading concert halls and festivals around the world, presents the New Year's Concert, which is broadcast internationally in over 90 countries, and presents the free Summer Night Concert Schönbrunn, which is attended annually by up to 100,000 people.

In 2018 the Vienna Philharmonic Orchestra Academy was founded. The academy students will be selected in accordance with a strict, internationally oriented audition process and trained at the highest level during a two-year course of study.

In 2014, the VPO received the coveted Birgit Nilsson Prize for outstanding achievements and major contributions to the field of opera / concert, and the Herbert von Karajan Music Prize 2014. The Vienna Philharmonic’s mission is to communicate the humanitarian message of music to its listeners. For over a decade, the VPO has given benefit concerts in support of humanitarian causes around the world, and since 2012, has been Goodwill Ambassador for IIASA, an international scientific institute based in Austria that conducts research into humanity’s most pressing problems. The musicians of the Vienna Philharmonic endeavor to implement the motto with which Ludwig van Beethoven prefaced his Missa solemnis: “From the heart, to the heart.”

This performance is sponsored by Bank of America, Carnegie Hall's Proud Season Sponsor.

This performance is sponsored by Mizuho Americas.

The Vienna Philharmonic Residency at Carnegie Hall is made possible by a leadership gift from the Mercedes T. Bass Charitable Corporation.

Tickets, priced are available at the Carnegie Hall Box Office, 154 West 57th Street, or can be charged to major credit cards by calling CarnegieCharge at 212-247-7800 or by visiting the Carnegie Hall website, carnegiehall.org.