NYO2 Brings Together Exceptional Young Musicians from Across the US, Ages 14–17, Including Three Local Miami Players Participating this Summer 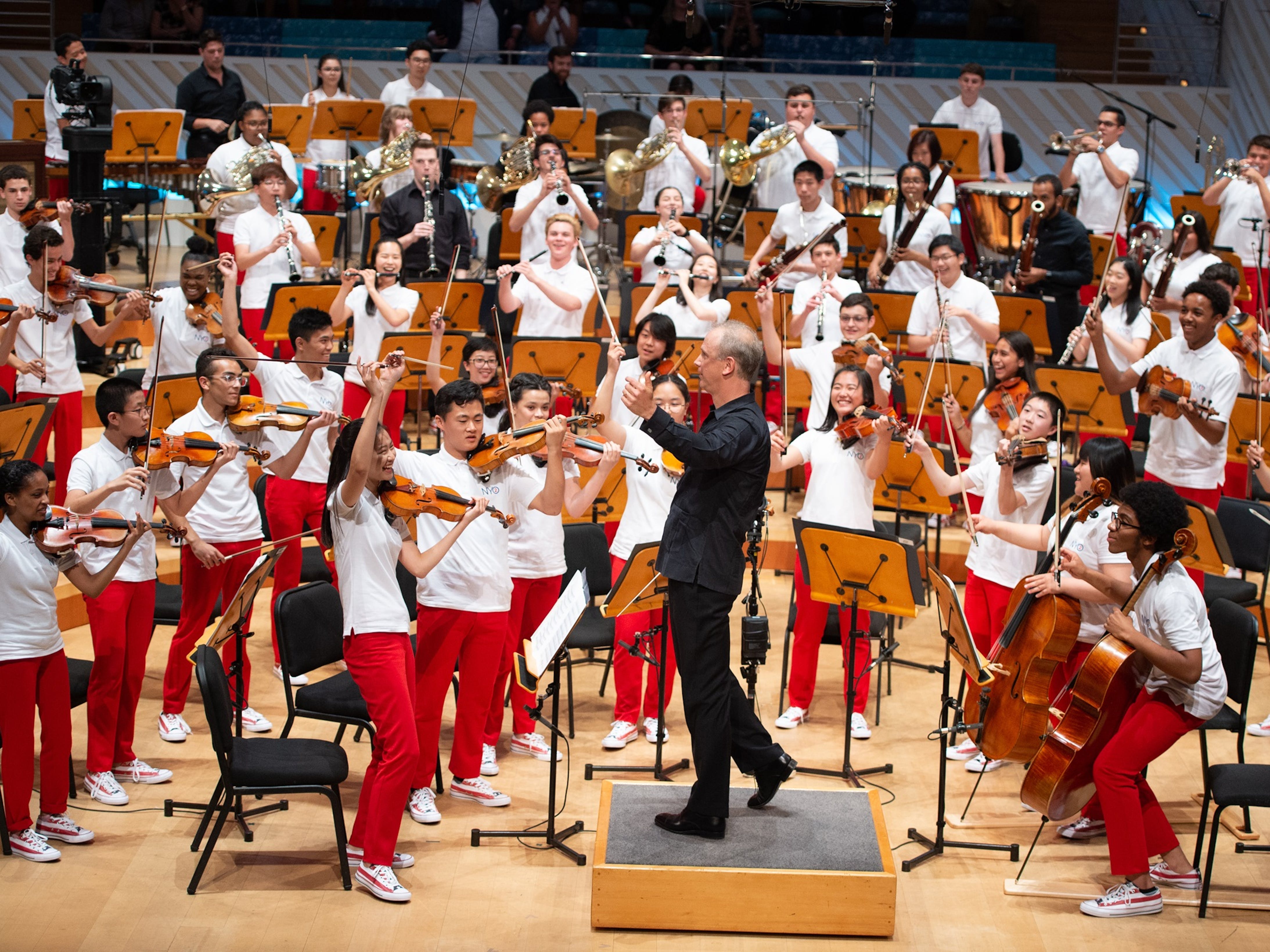 (July 9, 2019; NEW YORK, NY)—This July, following 11 days of intensive training in New York, the 80 members of NYO2—including extraordinary teen instrumentalists from across the United States—return to Miami Beach for their second annual summer residency with the New World Symphony (NWS), culminating in a performance at the New World Center on Saturday, July 27 at 8:30 p.m. led by conductor Carlos Miguel Prieto and featuring pianist Gabriela Montero. Throughout the Miami residency, which runs from July 22–29, NYO2 players will work with NWS Fellows, thanks to a continued partnership between Carnegie Hall and the New World Symphony. NYO2 first traveled to Miami Beach in summer 2018, which included a sold-out concert at the New World Center.

In addition to sectionals and full orchestra rehearsals, the NYO2 members will have opportunities to interact with local young musicians from the Miami Music Project through group discussions and team building activities. The musicians will also have the chance to explore the sights and sounds of the city and other cultural attractions during their time in Miami Beach.

The concert on July 27 will be made available to the community for free via WALLCAST®, with the full performance viewable outdoors in SoundScape Park on the 7,000-square-foot projection wall of the building. The program includes Stravinsky’s Pétrouchka, Falla’s The Three-Cornered Hat (abridged), and Gabriela Montero performing her own Piano Concerto No. 1, “Latin.”

Following its Miami residency, NYO2 returns to New York for a culminating performance at Carnegie Hall on Tuesday, July 30 at 7:30 p.m.

“We are thrilled to partner again with the New World Symphony to bring the talented young musicians of NYO2 back to Miami Beach” said Clive Gillinson, Carnegie Hall’s Executive and Artistic Director. “The opportunity to work with NWS Fellows and learn from conductor Carlos Miguel Prieto and pianist Gabriela Montero will be transformative for these students, and we hope they will return home to their communities inspired to further develop their playing and use music to connect with audiences everywhere.”

The 80 members of NYO2 2019—ages 14–17 and coming from 30 US states plus Puerto Rico—have been recognized as exceptionally talented musicians who not only embody a very high level of artistry, but who also come from a wide range of backgrounds, representing a bright future for American orchestral music. The roster includes six musicians from Florida, including three local players from the greater Miami area. 20 musicians will be returning to NYO2 from past seasons, and 22 prior members of NYO2 have been accepted to Carnegie Hall’s National Youth Orchestra of the United States of America (NYO-USA) this summer. Click here for the full list of NYO2 musicians, including photos, fun facts, and a national map.

The NYO2 program begins with an intensive 11-day training period at Purchase College, State University of New York (SUNY) in mid-July. There, the young musicians work with NWS Fellows as well as other professional players from top orchestras and also have opportunities to make music side-by-side with members of NYO-USA and NYO Jazz. Joseph Young, the newly-appointed Music Director of the Berkeley Symphony, returns as NYO2’s resident conductor, and the students will also have the opportunity to work with James Ross, music director of the Alexandria Symphony Orchestra. The faculty will lead private lessons, master classes, chamber music readings, and other seminars on essential music skills in preparation for the culminating concerts in Miami Beach and New York. Click here for a full list of NYO2 guest artists and faculty, including NWS Fellows.

Created by Carnegie Hall’s Weill Music Institute in summer 2016, NYO2 brings together outstanding young American instrumentalists ages 14–17 for a summer orchestral training program that culminates in exciting concerts in Miami Beach and Carnegie Hall. Running in conjunction with NYO-USA and NYO Jazz’s annual summer residencies at Purchase College, SUNY, NYO2 offers an opportunity for participants to play alongside exceptionally talented peers and learn from a world-class faculty. The program aims to expand the pool of young musicians across the country equipped with the tools to succeed at the highest level, particularly those who come from communities that have often been underserved by and underrepresented in the classical music field.

The inaugural season of NYO2 in summer 2016 culminated in a side-by-side concert with The Philadelphia Orchestra in Philadelphia’s Verizon Hall led by conductor Giancarlo Guerrero. In summer 2017, NYO2 made its Carnegie Hall debut with Guerrero, members of The Philadelphia Orchestra, and Grammy Award–winning bassist and vocalist Esperanza Spalding. Last year, NYO2 partnered with the New World Symphony for the first time, traveling to Miami Beach for a six-day residency, highlighted by performances at the New World Center and Carnegie Hall led by conductor Carlos Miguel Prieto and featuring violinist Gil Shaham.

Click here for a video showing highlights of NYO-USA, NYO2, and NYO Jazz from summer 2018.


About the New World Symphony

The New World Symphony, America’s Orchestral Academy (NWS), prepares graduates of music programs for leadership roles in professional orchestras and ensembles. In the 30+ years since its co-founding by Artistic Director Michael Tilson Thomas and Lin and Ted Arison, NWS has helped launch the careers of more than 1,000 alumni worldwide. A laboratory for the way music is taught, presented and experienced, the New World Symphony consists of 87 young musicians who are granted fellowships lasting up to three years. The fellowship program offers in-depth exposure to traditional and modern repertoire, professional development training and personalized experiences working with leading guest conductors, soloists and visiting faculty. Relationships with these artists are extended through NWS’ extensive distance learning via the internet. NWS Fellows take advantage of the innovative performance facilities and state-of-the art practice and ensemble rooms of the Frank Gehry-designed New World Center, the campus of the New World Symphony. In the hopes of joining NWS, more than 1,500 recent music school and conservatory graduates compete for about 35 available fellowships each year. The Fellows are selected for this highly competitive, prestigious opportunity based on their musical achievement and promise, as well as their passion for the future of classical music.

To learn more about the New World Symphony, visit nws.edu.


What the press have said about NYO2:

“It was inspiring to watch the young musicians of NYO2 in their Carnegie Hall debut… they vibrantly demonstrated a bright future for classical music.” – Musical America

“At turns tender and bombastic, lyrical and frenetic, it had both the exuberance of youth and the resonance of deep musical maturity. And, they nailed it.” – Feast of Music

“These young musicians played with both maturity and youthful enthusiasm.” – Superconductor


What Past Participants and NWS Fellows Have Said About NYO2:

“Working with the NYO2 students has been awesome. They are all coming from different parts of the country with different experiences, different backgrounds… Their energy is exciting. They just have this eagerness to absorb everything that’s happening.” – Priscilla Rinehart, Horn (New World Symphony)

“Not only has NYO2 changed me as a musician, but it has transformed me as a person as well. From all of the friends I have made around the country, to the staff, faculty, New World Symphony fellows… I have never felt more inspired and motivated.” — Jaycee Cardoso, Violin (Huntington Station, NY)

“I feel that this is a place where I can really open up as a musician.” – Ethan S. Olaguibel, Bass (Miami, FL)

Tickets for the New World Center concert may be purchased by visiting www.nws.edu or by calling the NWS Box Office at (305) 902-6856.

For anyone 18 years old or younger, $10 tickets are available by calling CarnegieCharge at 212-247-7800 or visiting the Carnegie Hall Box Office. $10 youth tickets are not available online.