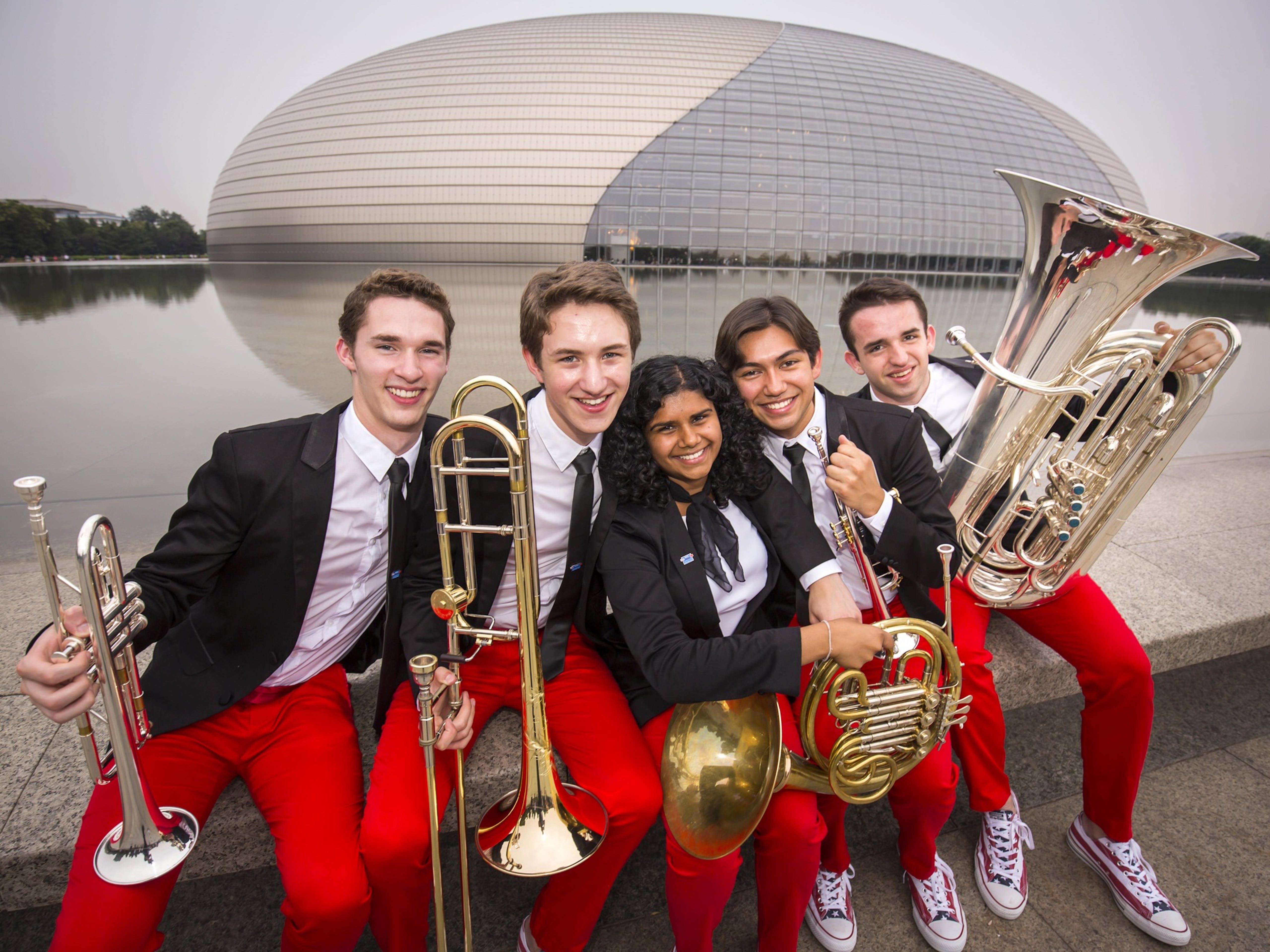 (June 28, 2018; NEW YORK, NY)— This summer 2018, the National Youth Orchestra of the United States of America (NYO-USA), featuring 106 outstanding young musicians from across the United States, comes together for its sixth year of extraordinary music-making, performing at Carnegie Hall in New York City (Thursday, July 19 at 7:30 p.m.), and in five cities across Asia, including Taipei, Beijing, Shanghai, Seoul, and Daejeon.

The members of the 2018 orchestra—all ages 16-19, coming from 28 US states plus Puerto Rico—have been recognized by Carnegie Hall as being among the finest players in the country, following a comprehensive and highly competitive audition process. NYO-USA is free for all participants, ensuring that all aspiring musicians who are accepted have the opportunity to take part. This summer’s orchestra will feature 36 returning musicians from previous years as well as 18 players who gained experience through NYO2, a Carnegie Hall ensemble for younger teens, ages 14-17. NYO-USA’s musicians reflect the highest level of talent and exceptional diversity found across the United States, with a number of members whose families originally hailed from the 2018 Asia tour cities. Click here for a full list of musicians.

Celebrated conductor Michael Tilson Thomas leads NYO-USA in summer 2018, joined by internationally-renowned pianist Jean-Yves Thibaudet as guest soloist. The concert program to be performed at Carnegie Hall and all tour venues includes Gershwin’s Piano Concerto in F Major featuring Mr. Thibaudet and Sibelius’s Symphony No. 2. It also features the premiere of Brass Tacksby American composer Ted Hearne, a new work specially commissioned for NYO-USA, described by Hearne as “a noisy dance, playful and ferocious…inspired by trap music and the rhythmic energy and dance culture of the hip-hop music of the American South.”

Following the orchestra’s Carnegie Hall concert on July 19, NYO-USA returns to Asia with appearances in cultural capitals across the continent, including performances at: the Taipei National Concert Hall (July 24); Shanghai Symphony Hall (July 27); the National Centre for the Performing Arts in Beijing (July 29); LOTTE Concert Hall in Seoul (August 1); and the Daejeon Arts Center (August 3).

The tour will mark NYO-USA’s debut performances in Taipei, Seoul, and Daejeon; the orchestra made its debuts in Beijing and Shanghai in summer 2015 as part of a seven-city tour of China. As part of their travel schedule, NYO-USA musicians will have the opportunity to tour each city they visit, meet and collaborate with local young musicians, and experience the richness of Asian culture.

“We are thrilled that the National Youth Orchestra of the USA will be returning to Asia in summer 2018 under the baton of Michael Tilson Thomas,” said Clive Gillinson, Carnegie Hall’s Executive and Artistic Director. “The musicians who make up NYO-USA’s 2018 roster are among the very best players in the nation. This promises to be an unforgettable summer of new discoveries for them, offering opportunities to present extraordinary performances around the world as they serve as wonderful musical ambassadors for their country.”

Launched in summer 2013 to great acclaim, the first-ever National Youth Orchestra of the USA presented concerts with conductor Valery Gergiev and violinist Joshua Bell to enthusiastic audiences at the Kennedy Center in Washington DC; St. Petersburg and Moscow in Russia; and at the BBC Proms in London. The 2014 orchestra, led by American conductor David Robertson with violinist Gil Shaham as soloist, made its debut at Carnegie Hall in New York City, followed by a coast-to-coast US tour. In 2015, NYO-USA, with conductor Charles Dutoit and pianist YUNDI, made its debut in China, performing at some of the country’s greatest concert halls, including stops in Beijing, Shanghai, Suzhou, Xi’an, Shenzhen, Guangzhou, and Hong Kong. In 2016, the orchestra performed with conductor Christoph Eschenbach and pianist Emanuel Ax at Carnegie Hall before embarking on a European tour with Valery Gergiev and Denis Matsuev. Last summer, the orchestra traveled to Latin America for the first time, performing in Guadalajara, Mexico; Quito, Ecuador; and Bogotá, Colombia under the direction of Marin Alsop.

In preparation for the 2018 Asia tour, the musicians of the National Youth Orchestra of the USA rehearse from July 1 to July 18 on the campus of Purchase College, State University of New York, located in Westchester County, just north of New York City.

James Ross—conducting faculty member at The Juilliard School in New York, music director of the Orquestra Simfònica del Vallès in Spain, and newly-appointed music director of the Alexandria Symphony Orchestra—has returned this summer to lead the NYO-USA faculty for a sixth year. The faculty, comprised of some of the finest principal players and section leaders from America’s top orchestras and music schools, oversees rehearsals during the orchestra’s Purchase residency and conducts master classes, chamber music readings, and other seminars on essential musical skills, all leading up to the orchestra’s international tour.

During its Purchase residency, the National Youth Orchestra of the USA trains alongside two other prestigious national youth ensembles established by Carnegie Hall: NYO2 and NYO Jazz, a new group that makes its debut this summer.

Building on the success of NYO-USA, Carnegie Hall launched NYO2, an ensemble for outstanding younger musicians, ages 14-17, in 2016 with a particular focus on recruiting talented students from a variety of backgrounds and communities traditionally underserved by classical music. Following its training residency, NYO2’s summer 2018 culminates with a six-day residency at the New World Center in Miami, and performances with Fellows of the New World Symphony, America’s Orchestral Academy and violinist Gil Shaham under the direction of conductor Carlos Miguel Prieto in Miami (July 21) and at Carnegie Hall (July 24).

New this summer: the best teen jazz musicians from across the United States, ages 16-19, will come together to form the very first NYO Jazz, America’s national youth jazz orchestra. Led in 2018 by acclaimed trumpeter Sean Jones and joined by Grammy Award-winning vocalist Dianne Reeves, NYO Jazz will be coached by world-class jazz masters before their Carnegie Hall debut (July 27) and inaugural European tour with stops in London, Edinburgh, Amsterdam, Kassel, and Berlin (July 31-August 10)—an opportunity to perform as cultural ambassadors on an international stage, sharing a uniquely American musical genre with people around the world. All three national youth ensemble programs are free for participants.

What the press have said about the National Youth Orchestra of the USA:

“The performance exuded vitality and confidence.” — The New York Times

“This very large orchestra not only played with ferocious spirit and genuine personality, but it also produced refined performances notable for credible polish.” — Los Angeles Times

“It was the kind of night that reassures classical music lovers that the art form will survive well into the future.” — Musical America

“Throughout, the playing was of the highest caliber: controlled, precise, crisp, and nuanced, with perfect ensemble.” — Classical Voice North America

“Carnegie Hall may have created the best music camp ever.” — National Public Radio

“With their debut this week it already seems safe to say that the future of classical music in America is stronger than it was even one month ago!” — The Times, London


Image at top of release by © Chris Lee.