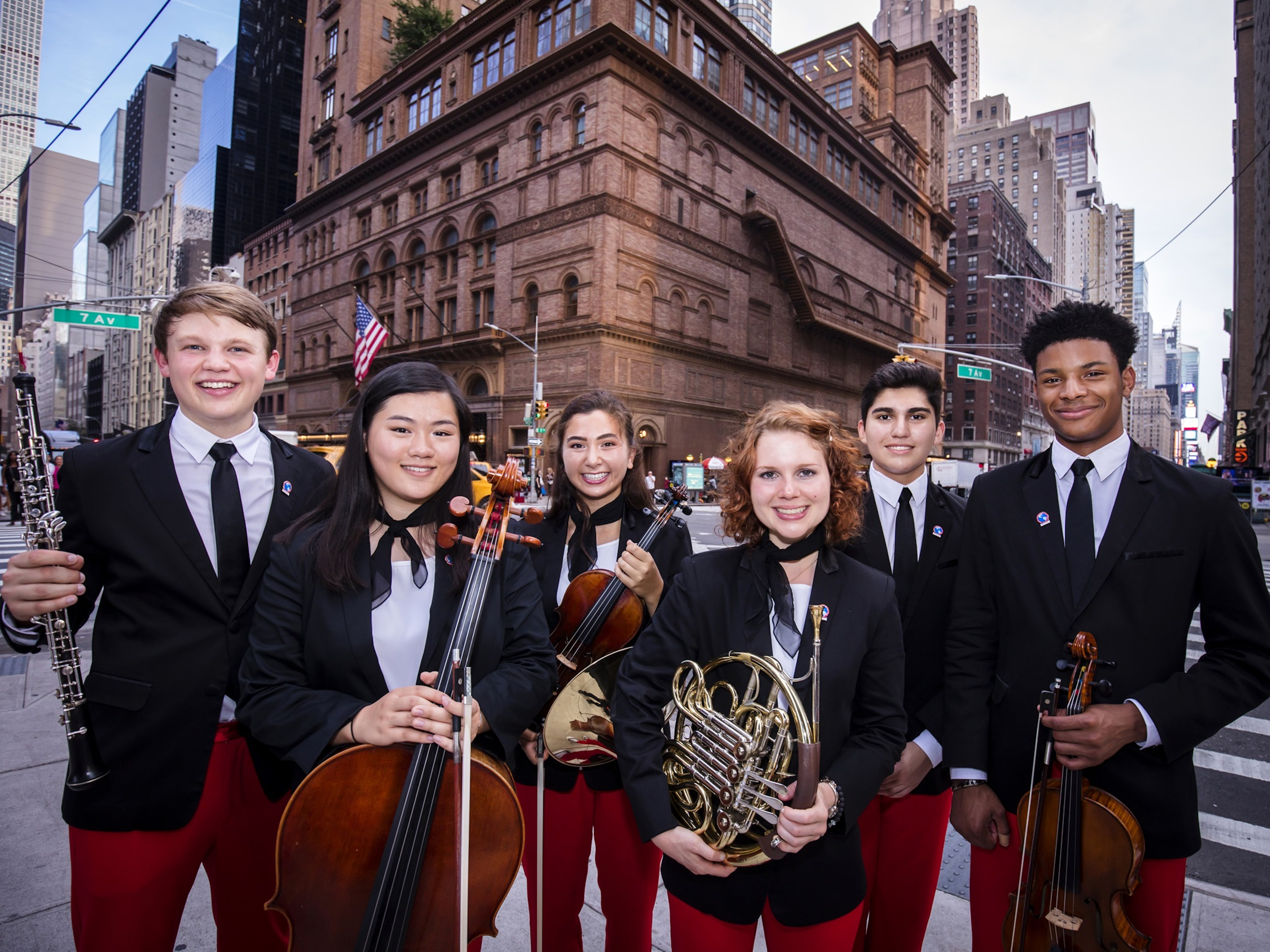 Marin Alsop and the National Youth Orchestra of the United States of America(NYO-USA) will be featured on an upcoming broadcast of NPR’s From the Top with Host Christopher O’Riley, the preeminent showcase for young musicians. The episode was recorded for a live audience at The Performing Arts Center at Purchase College, State University of New York, in July 2017. This special episode of From the Top can be heard by podcast and on stations nationwide during the week of October 30 and will air on WQXR 105.9 FM on Saturday, November 4 at 6:00 a.m. and on Classical WMHT on Saturday, November 4 at 5:00 p.m.

Additional information about From the Top can be found at www.fromthetop.org.

The episode will also be available for streaming at: https://www.fromthetop.org/show/nprs-top-host-christopher-oriley-purchase-ny-show-343/

The National Youth Orchestra of the United States of America (NYO-USA) is a program of Carnegie Hall’s Weill Music Institute that brings together the finest young musicians from across the country (ages 16-19) each summer. In July 2017, NYO-USA musicians took part in an intensive training residency followed by a performance in New York City and the orchestra’s inaugural Latin American tour.

Launched in summer 2013 to great acclaim, the first-ever National Youth Orchestra of the USA presented concerts with conductor Valery Gergiev and violinist Joshua Bell to enthusiastic audiences at the Kennedy Center in Washington DC; St. Petersburg and Moscow in Russia; and at the BBC Proms in London. The 2014 orchestra, led by American conductor David Robertson with violinist Gil Shaham as soloist, made its debut at Carnegie Hall in New York City, followed by a coast-to-coast US tour to Tanglewood in Lenox, Massachusetts; Boone, North Carolina; Chicago, Illinois; Jackson Hole, Wyoming; Sonoma County, California; and the Walt Disney Concert Hall in Los Angeles, California. In 2015, NYOUSA, with conductor Charles Dutoit and pianist YUNDI, made its debut in China, performing at some of the country’s greatest concert halls in many regions of the country, including concerts in Beijing, Shanghai, Suzhou, Xi’an, Shenzhen, Guangzhou, and Hong Kong. Last season, the orchestra performed at Carnegie Hall with conductor Christoph Eschenbach and pianist Emanuel Ax before embarking on a European tour that took them to Amsterdam, Montpellier, Copenhagen, and Prague, led by conductor Valery Gergiev and with pianist Denis Matsuev.

In 2018, NYO-USA will return to Asia for a tour with conductor Michael Tilson Thomas and pianist Jean-Yves Thibaudet.

About From the Top
From the Top is America’s largest national platform celebrating the stories, talents, and character of classically-trained young musicians. Through live events, NPR and YouTube broadcasts, scholarships, and leadership programs, From the Top empowers these extraordinary young people to engage and inspire music lovers of all ages.

Support for From the Top’s radio program is made possible through grants from the National Endowment for the Arts and the Jack Kent Cooke Foundation. It is also supported through the generous contributions of individuals and institutions as well as public radio stations. From the Top’s founding partners are New England Conservatory and WGBH.

From the Top is an independent non-profit organization proudly based in Boston’s vibrant cultural district. Learn more at www.fromthetop.org.

About The Performing Arts Center, Purchase College
The Performing Arts Center, Purchase College (The PAC), a four-theatre complex, is the major professional, non-profit arts presenter in the Southeastern New York–Southwestern Connecticut region. The Center presents a broad range of performances that engage, challenge, and educate as well as entertain, offering music, dance, theatre, film, comedy, and family programming to audiences from Westchester and the surrounding communities. For more information visit www.artscenter.org.

Purchase College, is located 28 miles northeast of New York City at the Connecticut border. The College, part of the State University of New York (SUNY), is an institution of public higher education encompassing the liberal arts and sciences, professional training in the performing and visual arts, continuing education, the Neuberger Museum of Art, and The Performing Arts Center.

Additional funding has been provided by The Jack Benny Family Foundation; JMCMRJ Sorrell Foundation; and Jolyon Stern and Nelle Nugent.


Image at top of release by Chris Lee