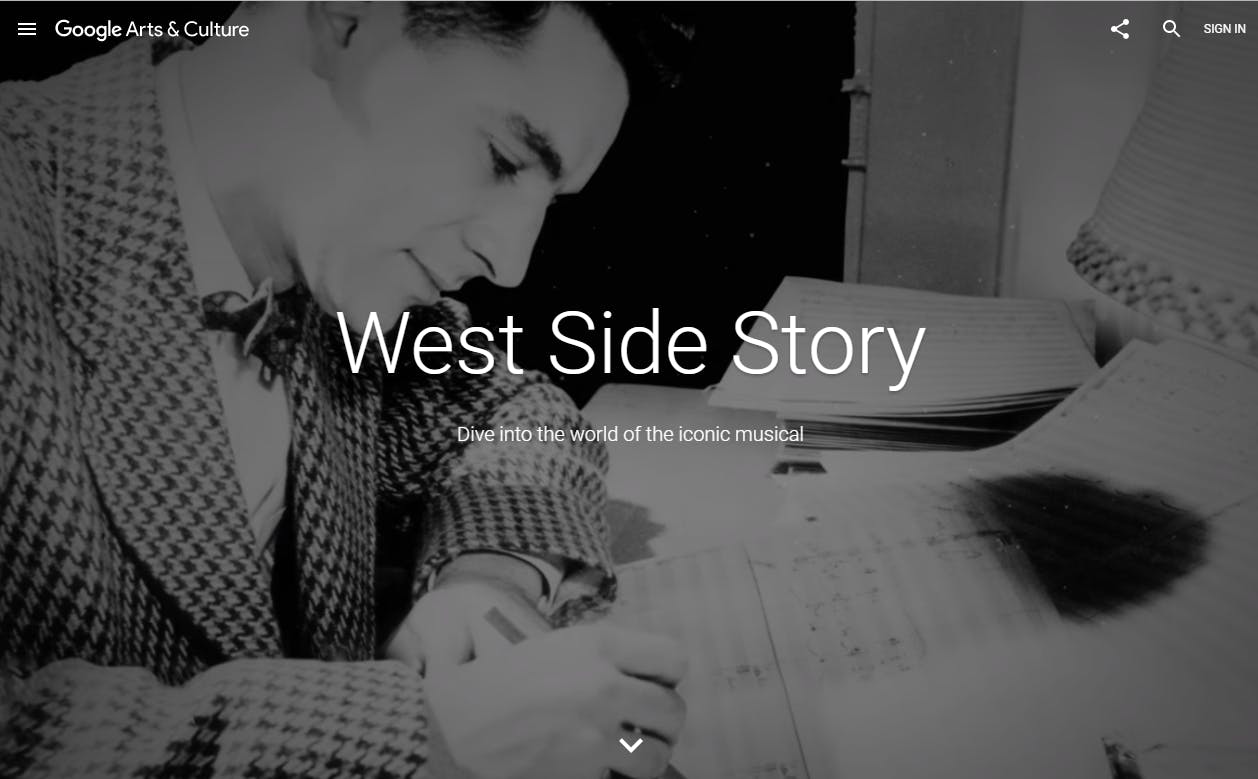 (New York, NY)—In partnership with Carnegie Hall, The New York Public Library for the Performing Arts, the Museum of the City of New York, and the National Museum of American Jewish History, Google Arts and Culture has brought together an impressive digital collection dedicated to the history and legacy of the iconic musical, West Side Story. Thanks to this new one-of-a-kind project, online visitors worldwide can now explore this musical theater masterpiece through exclusive archival content; rich educational and interactive stories; more than 1,800 high resolution images and videos, many digitized for the first time; 22 interactive exhibits curated by leading experts; a special interview with legendary Broadway star Chita Rivera, and many other treasures in just a few clicks at g.co/westsidestory.

Inspired by William Shakespeare’s Romeo and Juliet, the beloved American theater classic West Side Story resonates as strongly today as it did when it debuted on Broadway sixty years ago on September 26, 1957. The collaboration between composer Leonard Bernstein, choreographer Jerome Robbins, writer Arthur Laurents, and lyricist Stephen Sondheim created a timeless tale of rival street gangs and forbidden love in 1950s New York City that continues to captivate today’s theater audiences in productions around the globe; with music that is performed and recorded by major orchestras and artists, also inspiring an Academy Award–winning 1961 motion picture.

Content contributed by other partner institutions includes a digital exhibition by the National Museum of American Jewish History, previewing the museum’s March 2018 Leonard Bernstein exhibit in Philadelphia with artifacts, film, and interactive media looking at his original works for stage, screen, and orchestra; his leadership as a conductor; and his social activism.

Digital exhibits created by the Museum of the City of New York offer a window into New York City in the 1950s—including the West Side neighborhood in Manhattan that became the setting for West Side Story—and also provide a survey of the 1957-1958 Broadway season during which the musical earned six Tony Awards.

Highlights of the wide variety of content developed by the New York Public Library for the Performing Arts include exhibits on the choreography of Jerome Robbins, curated by musical theater scholar Julia Foulkes; as well as the inspirations for the production’s set design; and the making of the 1961 film. Photographs by Martha Swope give a fascinating glimpse of the musical in rehearsal and the first production.

“I have long believed West Side Story to be the finest musical ever created,” said Carnegie Hall’s Executive and Artistic Director Clive Gillinson. “It has been very meaningful for us to collaborate with Google Arts and Culture and our project partners to bring together this illuminating collection, inviting people worldwide to explore a landmark work that is as inspiring and relevant today as it was on the day it was written.”

Carnegie Hall’s 2017–2018 season launches on Wednesday, October 4 with an Opening Night concert featuring The Philadelphia Orchestra and Music Director Yannick Nézet-Seguin. With this concert, Carnegie Hall joins in the worldwide celebrations of the 100th anniversary of Leonard Bernstein’s birth with a festive program that includes the Symphonic Dances from West Side Story.

About Google Arts and Culture
Google Arts & Culture is a new, immersive way to experience art, history, culture and world wonders from over a thousand organizations worldwide. Google Arts & Culture has been created by the Google Cultural Institute and it is available for free for everyone on the web, on iOS and Android. Read more here.