Concert to Be Heard Nationwide on Carnegie Hall Live, Kicking Off Season-Long Broadcast and Digital Series on WQXR 105.9 FM and WQXR.org

Welser-Möst, Bronfman, and the Orchestra Return the Following Evening with Music by Jörg Widmann and Mahler on Friday, October 4 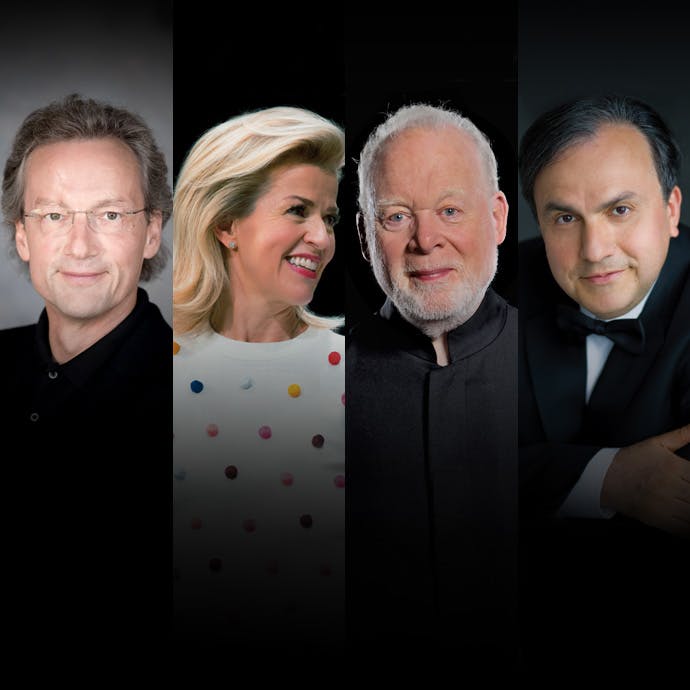 Carnegie Hall celebrates the start of its 2019–2020 season with an Opening Night Gala concert on Thursday, October 3 at 7:00 p.m. with The Cleveland Orchestra conducted by Music Director Franz Welser-Möst. An all-star trio featuring violinist Anne-Sophie Mutter, cellist Lynn Harrell, and pianist Yefim Bronfman join Mr. Welser-Möst and the Orchestra for Beethoven’s Triple Concerto with Ms. Mutter also appearing as soloist in Beethoven’s Romance for Violin and Orchestra in G Major. The festive evening will open with the overture to Nicolai’s The Merry Wives of Windsor and also include the Concert Suite from Richard Strauss’s richly-orchestrated Der Rosenkavalier.

The October 3 concert also kicks off Carnegie Hall’s season-long celebration of the 250th anniversary of Beethoven’s birth with more than 35 events highlighting the impact of the master composer’s work scheduled to take place throughout the 2019-2020 season.

Mr. Welser-Möst and The Cleveland Orchestra return to Carnegie Hall the following evening—Friday, October 4 at 8:00 p.m.—with pianist Yefim Bronfman as soloist in Trauermarsch, a work written expressly for the pianist by Jörg Widmann as well as Mahler’s Symphony No. 5. Mr. Widmann is the holder of Carnegie Hall’s Richard and Barbara Debs Composer’s Chair throughout the 2019-2020 season.

About the Artists
Franz Welser-Möst is among today’s most distinguished conductors. The 2019–2020 season marks his eighteenth year as music director of The Cleveland Orchestra, with the future of this acclaimed partnership extending into the next decade. Under his direction, The Cleveland Orchestra has been repeatedly praised for its extraordinary music-making, as well as its inventive programming, ongoing support for new musical works, and innovative approach to semi-staged and staged opera presentations. An imaginative approach to juxtaposing newer and older works in concert and festivals has opened fresh insights for musicians and audiences alike. The Orchestra has also been recognized for its success in building up a new and, notably, a young audience through groundbreaking programs involving students and families.

As a guest conductor, Mr. Welser-Möst enjoys a particularly close and productive relationship with the Vienna Philharmonic. He has twice appeared on the podium for their celebrated New Year’s Concert, and regularly conducts the orchestra in subscription concerts at Vienna’s Musikverein, as well as on tours in Japan, China, Australia, and the United States. Mr. Welser-Möst and the Vienna Philharmonic have performed together at historical memorial concerts in Sarajevo and Versailles. Highlights of his guest conducting appearances during the 2019–2020 season include performances of Strauss’s Die Aegyptische Helena at Teatro alla Scala in Milan, as well as concerts with the New York Philharmonic, Leipzig Gewandhaus Orchestra, Bavarian Radio Symphony, Amsterdam’s Royal Concertgebouw Orchestra, and the Royal Stockholm Philharmonic.

Franz Welser-Möst is also a regular guest at the Salzburg Festival, where his work leading a series of opera performances— including Rusalka, Der Rosenkavalier, Fidelio, Die Liebe der Danae, Aribert Reimann's Lear, and Strauss's Salome—has been widely acclaimed. The success of both Salome and Rosenkavalier led the Festival to schedule encore performances in subsequent years.

Mr. Welser-Möst’s recordings and videos have won major international awards and honors, including a Gramophone Award, Diapason d’Or, Japanese Record Academy Award, and two Grammy Award nominations. With The Cleveland Orchestra, his recordings include a number of DVDs on the Clasart Classic label, featuring live performances of five of Bruckner’s symphonies, a multi-DVD set of major works by Brahms (featuring Yefim Bronfman and Julia Fischer as soloists), and Brahms’s A German Requiem. A number of his Salzburg opera productions, including Rosenkavalier, have been released internationally on DVD by Unitel.

In June 2019, Mr. Welser-Möst was awarded the Gold Medal in the Arts by the Kennedy Center International Committee on the Arts in recognition of his long-lasting impact on the international arts community. Other honors include the Vienna Philharmonic’s “Ring of Honor” for his longstanding personal and artistic relationship with the ensemble, the Pro Arte Europa¬Preis for his advocacy and achievements as a musical ambassador, recognition from the Western Law Center for Disability Rights, honorary membership in the Vienna Singverein, appointment as an Academician of the European Academy of Yuste, a Decoration of Honor from the Republic of Austria for his artistic achievements, and the Kilenyi Medal from the Bruckner Society of America.

Under the leadership of Music Director Franz Welser-Möst, The Cleveland Orchestra has become one of the most sought-after performing ensembles in the world, setting standards of extraordinary artistic excellence, creative music-making, and community programming. The New York Times has declared it “... the best in America” and “America’s most understatedly amazing orchestra” for the group’s virtuosity, humility, self-confidence, elegance of sound, variety of color, and chamber-like musical cohesion. Having celebrated its 100th birthday year in 2018, The Cleveland Orchestra is making its mark as a decidedly 21st-century ensemble, dedicated to serving its hometown and the art of music with focused traditions and innovative initiatives.

Strong community support from across the ensemble’s home region is driving the Orchestra forward with renewed energy, increasing the number of young people attending concerts, and bringing fresh attention to the Orchestra’s legendary sound and committed programming — including performances that regularly juxtapose older and newer musical works in standard concerts, festivals, and annual opera presentations.

The 2019–2020 season features a festival exploring art and censorship, centered around Alban Berg’s opera Lulu (May 2020), as well as a pairing of works by Franz Schubert and Sergei Prokofiev, including both well-known and rarely played pieces. Recent festivals and opera presentations have included a made-for-Cleveland production of Strauss’s Ariadne auf Naxos (January 2019), the Ecstasy of Tristan and Isolde (April 2018), Debussy’s Pelléas and Mélisande (May 2017), and an innovative presentation of Janácek’s The Cunning Little Vixen (May 2014, with encore performances in Cleveland and Europe in 2017). Earlier festival explorations saw Franz Welser-Möst re-examining Beethoven’s symphonies (The Prometheus Project, presented in Cleveland, Vienna, and Tokyo), as well pairings of Beethoven with Shostakovich and John Adams with Anton Bruckner.

The Cleveland Orchestra’s partnership with Franz Welser-Möst, begun in 2002 and entering its 18th year with the 2019–2020 season, has earned the ensemble unprecedented residencies in the U.S. and around the world, including one at the Musikverein in Vienna, the first of its kind by an American orchestra and regular performances at the Salzburg Festival. The Orchestra and Mr. Welser-Möst traveled to Asia in spring 2019 and returns to Europe with performances in Vienna and Paris in spring 2020.

The Cleveland Orchestra has a long and distinguished recording and broadcast history. Recordings issued under the direction of Mr. Welser-Möst continue to add to an extensive and widely praised catalogue of recordings made during the tenures of the ensemble’s earlier music directors. In addition, Cleveland Orchestra concerts are heard around the world online via weekly broadcasts and streaming on WCLV 104.9/ideastream© in Cleveland.

Seven music directors—Nikolai Sokoloff, Artur Rodzinski, Erich Leinsdorf, George Szell, Lorin Maazel, Christoph von Dohnányi, and Franz Welser-Möst—have guided and shaped the ensemble’s growth and sound since its founding in 1918. Through concerts at home and on tour, via radio broadcasts and a catalog of acclaimed recordings, The Cleveland Orchestra is heard today by a broad and growing group of fans around the world.

Tickets for Carnegie Hall’s Opening Night Gala on October 3: Gala Benefit tickets—priced at $10,000; $6,000; $3,000; and $1,500—include concert seating and the post-concert dinner at Cipriani 42nd Street. Tickets priced at $1,000 include the concert and a pre-concert cocktail reception at 5:30 p.m. in Carnegie Hall’s Rohatyn Room. All gala benefit tickets are available by calling the Carnegie Hall Special Events office at 212-903-9679 or online at carnegiehall.org/OpeningNight2019.

A limited number of Opening Night concert-only tickets—priced at $53 to $175—are now available at the Carnegie Hall Box Office by calling CarnegieCharge at 212-247-7800, or online at carnegiehall.org.