The New York Pops Opens its 2019-2020 Carnegie Hall Season on Friday, October 18 with One Night Only: Jeremy Jordan

Additional Concerts This Season Include: A Frank and Ella Christmas, with Tony DeSare & Capathia Jenkins on December 20 and 21; Laura Michelle Kelly and Max von Essen Singing Rodgers and Hammerstein on January 24; A Tribute to Aretha Franklin, Whitney Houston, Barbra Streisand, Adele and More, with Mandy Gonzalez, Carrie Manolakos, and Alex Newell on February 14; and A Celebration of the Film Scores of John Williams on March 27 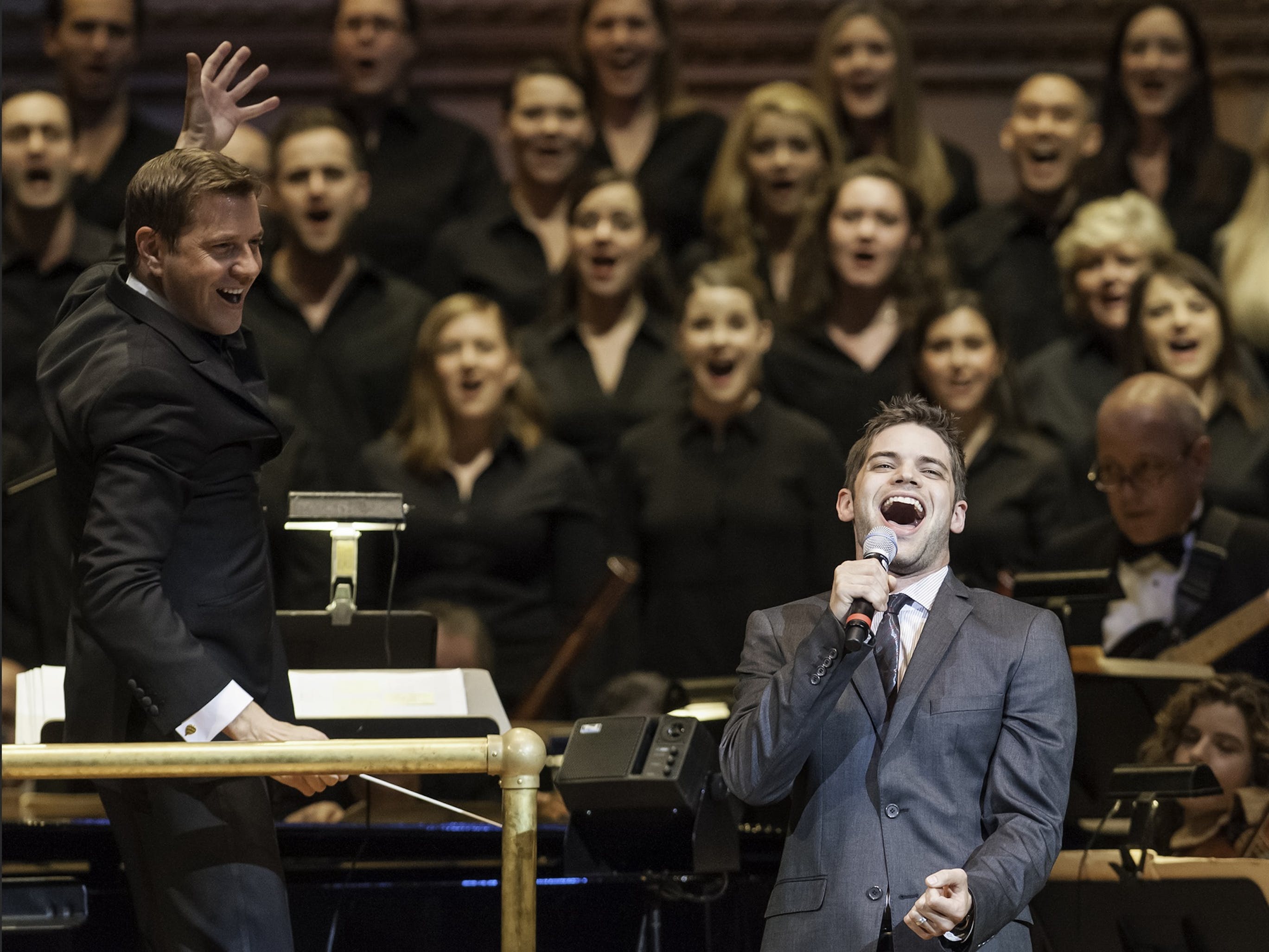 The New York Pops, led by Music Director and Conductor Steven Reineke, opens its 2019–2020 Carnegie Hall season on Friday, October 18 at 8:00 p.m. in Stern Auditorium / Perelman Stage with a program featuring star of stage and screen: Jeremy Jordan. The concert includes some of Jordan’s favorite songs, including “Bring Him Home” from Les Misérables, “Moving Too Fast” from The Last Five Years, “Santa Fe” from Newsies, “She Used to Be Mine” from Waitress, and “Something’s Coming” from West Side Story.

Additional New York Pops performances at Carnegie Hall this season include A Frank and Ella Christmas on Friday, December 20 at 8:00 p.m. and Saturday, December 21 at 8:00 p.m. The New York Pops and Mr. Reineke are joined by jazz star Tony DeSare, stage legend Capathia Jenkins and Essential Voices USA for a celebration of the most wonderful time of the year.

Reineke and The New York Pops return to the timeless work of Rodgers and Hammerstein in a concert that covers all 11 of their classic collaborations on Friday, January 24 at 8:00 p.m. with Broadway stars Laura Michelle Kelly, Max von Essen, and Essential Voices USA.

On Friday, February 14, at 8:00 p.m. The New York Pops salutes the power of the female voice with a tribute to Aretha Franklin, Whitney Houston, Barbra Streisand, Adele, and fellow icons who have transformed the world through song. Featured on the program are Broadway stars Mandy Gonzalez (In the Heights, Wicked, Hamilton), Carrie Manolakos (Mamma Mia! and Wicked), and Alex Newell (Glee, Once on This Island).

About the Artists
Steven Reineke has established himself as one of North America’s leading conductors of popular music. Mr. Reineke is the Music Director of The New York Pops, Principal Pops Conductor of the National Symphony Orchestra, and Principal Pops Conductor of the Houston and Toronto symphony orchestras. In addition, he is a frequent guest conductor with The Philadelphia Orchestra.

As the creator of more than 100 orchestral arrangements for the Cincinnati Pops Orchestra, Reineke’s work has been performed worldwide and can be heard on numerous Cincinnati Pops Orchestra recordings on the Telarc label. His symphonic works Celebration Fanfare, Legend of Sleepy Hollow, and Casey at the Bat are performed frequently. His Sun Valley Festival Fanfare was used to commemorate the Sun Valley Summer Symphony’s pavilion, and his Festival Te Deum and Swan’s Island Sojourn were debuted by the Cincinnati Symphony and Cincinnati Pops. His numerous wind ensemble compositions are published by the C.L. Barnhouse Company and are performed by concert bands worldwide.

The New York Pops is the largest independent pops orchestra in the United States and the only professional symphonic orchestra in New York City specializing in popular music. Led by Music Director and Conductor Steven Reineke, the orchestra performs an annual subscription series at Carnegie Hall, and is among the venue’s most presented ensembles. The New York Pops’ annual birthday gala is celebrated each spring, raising funds for the orchestra and its education programs. The New York Pops performs annually in Queens, NY at Forest Hills Stadium, a 14,000-seat historic concert venue. Now in its 37th season, The New York Pops celebrates the diversity of popular music’s evolving songbook. Every concert is a once-in-a-lifetime experience, with influences ranging from Broadway melodies to film scores, jazz, rock, pop, and everything in between. Under Reineke’s dynamic leadership, The New York Pops continues to re-imagine orchestral pops music.

Through its PopsEd music education programs, The New York Pops fulfills its dedication to lifelong learning by collaborating with public schools, community organizations, and senior centers throughout the five boroughs of New York City. PopsEd allows thousands of New Yorkers of all ages and backgrounds to participate in fully customizable music programs that blend traditional education with pure fun.

The New York Pops is committed to serving all members of the community. Through its Kids in the Balcony and Kids in the Stadium programs, thousands of children and their parents have had an opportunity to see The New York Pops at Carnegie Hall and Forest Hills Stadium free of charge.

ONE NIGHT ONLY: JEREMY JORDAN

A FRANK AND ELLA CHRISTMAS

FIND YOUR DREAM: THE SONGS OF RODGERS AND HAMMERSTEIN

I'M EVERY WOMAN: DIVAS ON STAGE


Photo of Steven Reineke & Jeremy Jordan at top of release by © Jack Vartoogian.

Tickets, priced at $44–$145, are available at the Carnegie Hall Box Office, 154 West 57th Street, or can be charged to major credit cards by calling CarnegieCharge at 212-247-7800 or by visiting the Carnegie Hall website, carnegiehall.org.