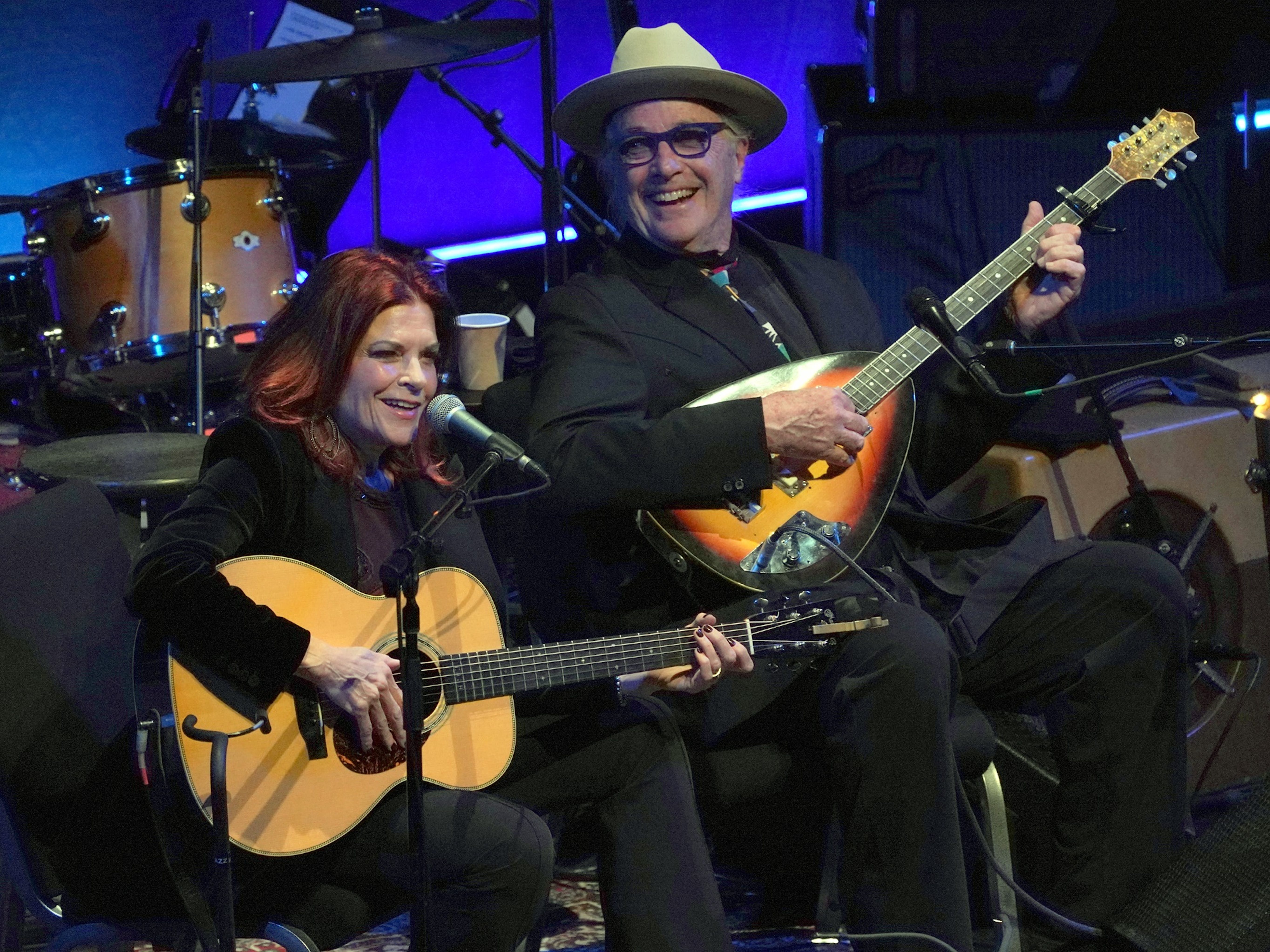 On Saturday, November 2, 2019 at 8:00 p.m., in Stern Auditorium / Perelman Stage, two American luminaries –singer-songwriter Rosanne Cash and iconic guitarist, producer, and film score composer Ry Cooder – join together in a program called Cash and Cooder on Cash: The Music of Johnny Cash. Performed in New York City for the first time, this highly anticipated event brings the duo together for a sublime tribute to Johnny Cash, featuring heartfelt personal interpretations of beloved songs from his legendary songbook.

The impetus for this extraordinary evening came about when the SFJAZZ Center selected Cash as a Resident Artistic Director for its 2017 and 2018 seasons. “When I was planning my residency in San Francisco, I couldn’t stop thinking about Ry,” she says. “He and I had only performed together a few times over the years, just a song or two and it always left me wanting more. Finally, I got up my courage and asked him if he wanted to make up a show—anything at all—and I offered a few ideas. He brushed off my initial thoughts, and said, ‘What springs to mind is a show of your dad’s songs. What else can I say?’ When Ry suggested it, oddly, I didn’t even hesitate…. I told him that he was the only person on the planet I would do a show of Johnny Cash songs with.”

Cooder recalls, “I was in the 4th grade and things were not looking up. Then one day they played ‘Hey Porter’ on the aircraft worker’s radio station. In those days you heard Bob Wills and Webb Pierce, which was good, but Johnny was something different. It was like a hand reached out from my little Sears radio and grabbed me by the shirt and said, ‘you’re coming with me now.’ That was 63 years ago. So when Rosanne said, ‘Okay, let’s do Johnny,’ I said, ‘I think I’m ready.’”

Prior to Saturday’s performance, on Friday, November 1 at 8:30 p.m., Cash’s American Byways series returns to Zankel Hall with a concert featuring The Milk Carton Kids. The duo caught Cash’s attention with their unique American roots-folk flavor reminiscent of the Everly Brothers and Simon and Garfunkel. The second installment of the series, on Friday, April 24 at 9:00 p.m., features the undiluted Mississippi Hill Country Blues of multi-instrumentalist Cedric Burnside (grandson of legendary bluesman R. L. Burnside) and guitarist-vocalist Molly Tuttle (daughter of bluegrass icon Jack Tuttle). Together, they celebrate their incredible musical lineage in performances seeped in the southern American roots tradition.


About the Artists
One of the country’s pre-eminent singer/songwriters, Rosanne Cash has released 15 albums of extraordinary songs that have earned 4 Grammy Awards and 11 nominations, as well as 21 top 40 hits, including 11 No. 1 singles. She is also an author whose four books include the best-selling memoir Composed, which the Chicago Tribune called “one of the best accounts of an American life you’ll likely ever read.” Her essays have appeared in The New York Times, Rolling Stone, the Oxford-American, The Nation and many more print and online publications. A new book, Bird On A Blade, blending the images of acclaimed artist Dan Rizzie with strands of lyrics from a variety of Cash’s songs has just been published by UT Press. In addition to regular touring, Cash has partnered in programming collaborations with Lincoln Center, SFJAZZ, Minnesota Orchestra, and The Library of Congress. She was awarded the SAG/AFTRA Lifetime Achievement award for Sound Recordings in 2012 and received the 2014 Smithsonian Ingenuity Award in the Performing Arts. She was chosen as a Perspectives Series artist at Carnegie Hall for the 2015-16 season, and curated a series of American roots music, including her own performance.  She continues her association with Carnegie Hall as a Creative Partner for the 2019-20 season. She also served as 2015 Artist-in-Residence at the Country Music Hall of Fame and Museum in Nashville and was inducted into the Nashville Songwriters’ Hall of Fame that same year. In 2018, Cash was awarded with the Spirit of Americana: Free Speech Award by the Americana Music Association and received an honorary doctorate degree from the Berklee College of Music. Her latest album released in November 2018 is She Remembers Everything (Blue Note), a poetic, lush and soulful collection of songs that reckon with a flawed and complex world, as she elucidates in this short film about the album. She Remembers Everything followed Rosanne’s triple-GRAMMY winning 2014 album The River & The Thread.

Ry Cooder is an American musician, songwriter, record producer, and film score composer best known for his unparalleled skill on the slide guitar. Cooder has been the recipient of six GRAMMY Awards including Best World Music Album, Best Pop Instrumental Album, and the 1997 Best Tropical Latin Performance GRAMMY for his work producing the classic album Buena Vista Social Club. His wide-ranging discography includes over 20 classic albums, such as Boomer’s Story (1972), Chicken Skin Music (1976), Bop till You Drop (1979), Get Rhythm (1987), Borderline (1980), My Name is Buddy (2007), Election Special (2012), and Live in San Francisco (2013), which was recorded during a two night stint at the famous Great American Music Hall and featured Joachim Cooder, Arnold McCuller, and Flaco Jimenez. His collaborations with fellow musicians over the years have produced quintessential albums such as Little Village (1992), The Long Black Veil with The Chieftains (1995), Mambo Sinuendo with Manuel Galban (2003), and the aforementioned award-winning Buena Vista Social Club, which saw the reunion of some of the greatest surviving musicians of the 20th century Cuban music scene. Cooder also performed on Buena Vista Social Club at Carnegie Hall, a live album recorded during the group’s sold-out 1998 Carnegie Hall concert. Cooder’s skill as a musician and composer has translated into his scoring multiple film soundtracks for films such as Paris, Texas, The Long Riders, Southern Comfort, Streets of Fire, Last Man Standing, and Crossroads. An in-demand session musician, over the years Cooder has performed on albums by The Rolling Stones, Van Morrison, Nancy Sinatra, Kim Carnes, Randy Newman, John Hiatt, James Taylor, Warren Zevon, The Beach Boys, and Mavis Staples. His latest album, The Prodigal Son (Fantasy), released worldwide in May 2018.


Presented as part of American Byways.


CASH AND COODER ON CASH: THE MUSIC OF JOHNNY CASH


Presented as part of American Byways.


In honor of the centenary of his birth, Carnegie Hall’s 2019–2020 season is dedicated to the memory of Isaac Stern in recognition of his extraordinary contributions to Carnegie Hall, arts advocacy, and the field of music