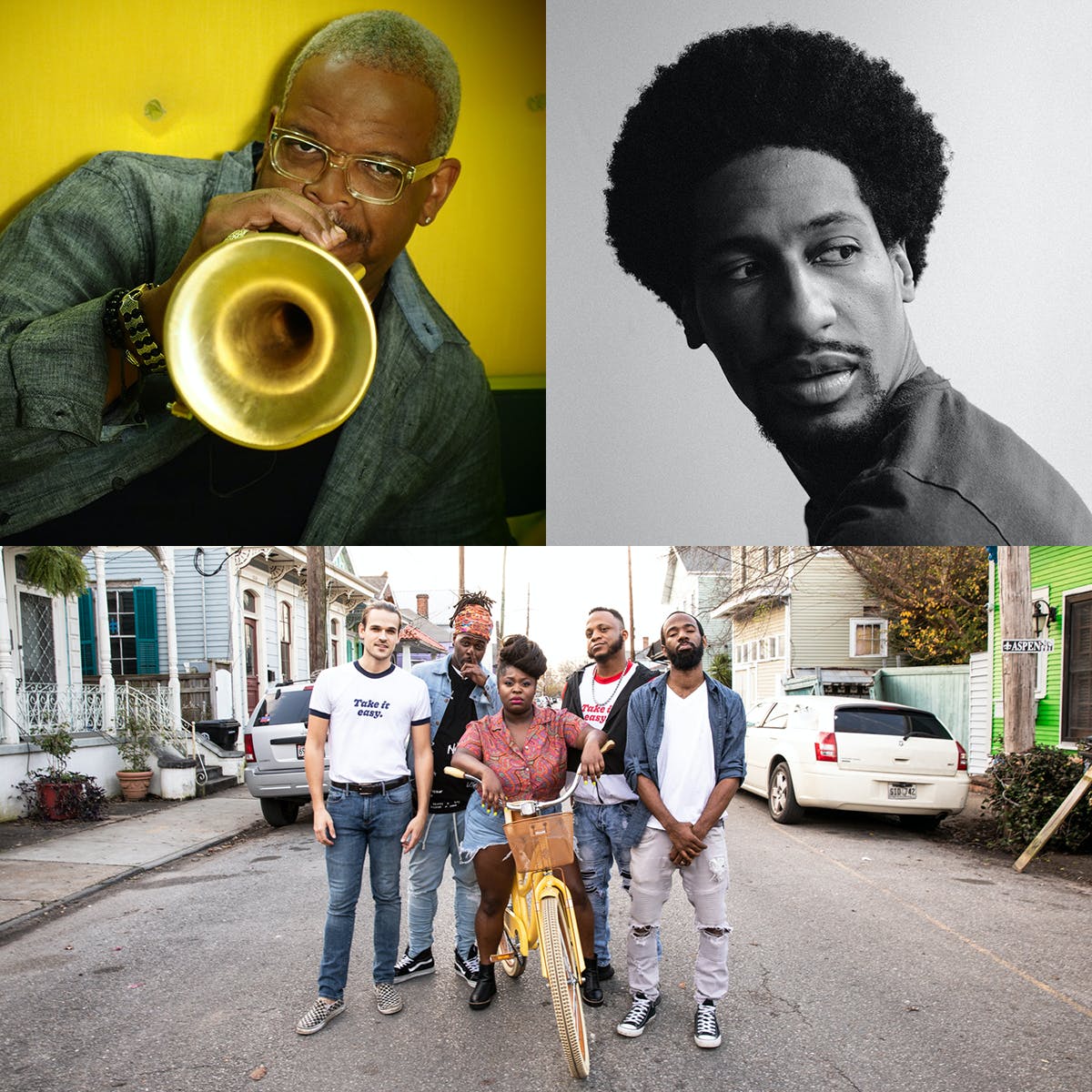 Terence Blanchard by Henry Adebonojo, Jon Batiste by Abby Ross, and Tank and The Bangas by Alex Marks

This concert is part of Angélique Kidjo’s Perspectives Series which takes audiences on a journey of African music and culture throughout the world. The residency kicked off on October 19 with a sold-out Zankel Hall performances by Benin International Musical. In addition to Diaspora Songs on December 6, upcoming events on the series include:

Benin-born guitarist Lionel Loueke brings a program inspired by African and traditional jazz to Zankel Hall on Friday, December 13 at 9:00 p.m. Loueke and his trio, along with special guest Brazilian percussionist Cyro Baptista, honor Kidjo in a concert that both celebrates and reinvents many of her marvelous songs.

The series culminates on Saturday, March 14 at 8:00 p.m. in Stern Auditorium / Perelman Stage with a special concert marking both Kidjo’s 60th birthday and the anniversary of independence of her native Benin in addition to 16 other West African nations. For this momentous occasion, Kidjo will perform and is joined by a host of stellar guest artists to celebrate her remarkable musical career.

About the Artists
Terence Blanchard is a six-time Grammy Award-winning jazz trumpeter, composer and music educator who in 2019 received an Oscar nomination for best original score for Spike Lee’s BlacKkKlansman. Blanchard has been named the first Kenny Burrell Chair in Jazz Studies at the UCLA Herb Alpert School of Music, which was established to honor Burrell, a legendary jazz guitarist and composer, as well as the founder and director of jazz studies at UCLA from 1996 to 2016.

Blanchard, a veteran of Art Blakey’s Jazz Messengers, is a musical polymath who launched his solo career as a bandleader in the 1990s. Since then he has released 20 solo albums, composed more than 60 film scores, and received 10 major commissions. Among these works are two critically-acclaimed operas in jazz commissioned by the Opera Theatre of Saint Louis - Champion which debuted in 2013, as well as the recently premiered Fire Shut Up In My Bones based on the memoir by Charles Blow (Op-Ed columnist for The New York Times). Blanchard has also composed work for Broadway revivals, plays, dance performances, and for national orchestras, including the Los Angeles Philharmonic.

In addition to Blanchard’s recent Oscar nod for the score for BlacKkKlansman, he also won his sixth Grammy for the haunting main theme from the film, “Blut Und Boden (Blood and Soil),” in the Best Instrumental category. A recipient of the 2019 BMI Icon Award, Blanchard became a go-to composer for film beginning in the early 1990s, so much so that Entertainment Weekly called Blanchard “central to a general resurgence of jazz composition for film.” His credits include Lee classics Do the Right Thing, Jungle Fever, Malcolm X, 25th Hour as well as Lee’s 2006 post-Katrina HBO documentary When the Levees Broke: A Requiem in Four Acts. Some of Blanchard’s other film credits include Black or White starring Kevin Costner and directed by Mike Binder; the Kasi Lemmons’ films, Eve’s Bayou and the upcoming Harriet (opening November 1); George Lucas’ Red Tails; and Tim Story’s Barbershop.

His latest projects include his new album Live, featuring seven songs recorded live in concert with his current quintet, the E-Collective. The album is a powerful musical statement concerning painful American tragedies from the past and present, and addresses critical issues, among them the staggering cyclical epidemic of U.S. gun violence. The album is also an impassioned continuation of the band’s Grammy-nominated 2015 studio recording, Breathless, which includes a title track written with the “Eric Garner ‘I can’t breathe’ NYPD chokehold in mind,” says Blanchard.

Later this year Blanchard will also pay tribute to his mentor Art Blakey with the staging of "AB-Squared,” an evening of Blakey's music. Blakey is also known for developing and nurturing the next generation of jazz voices - a practice that Blanchard follows closely.

An avid music educator, Blanchard served as artistic director of the Thelonious Monk Institute of Jazz (now named the Herbie Hancock Institute of Jazz) from 2000 to 2011. In this role, he presented masterclasses and worked with students in the areas of artistic development, arranging, composition and career counseling.

Born into a long lineage of Louisiana musicians, Jon Batiste is a globally celebrated musician, educator, bandleader, and television personality whose musical skill, artistic vision, and exuberant charisma has garnered him the well-deserved title of “crowned prince of jazz.” Batiste is recognized for his originality, jaw-dropping talent, and dapper sense of style. Batiste effortlessly transitions from commanding the piano with virtuosic skill to soulfully crooning to wailing on the “harmonaboard” (a hybrid of a harmonica and keyboard) to curating unique “social music” experiences all over the world, whether solo or with his band Stay Human.

Batiste is a musical genius who delicately balances a demanding schedule on screen and on stage, which includes his role as Bandleader and Musical Director with The Late Show with Stephen Colbert to recently honoring Philip Glass with a performance of “Opening” from “Glassworks” at the 41st Annual Kennedy Center Honors.

Ironically, with his album Hollywood Africans inspired by the famous 1983 painting, it’s befitting that Batiste has been tapped to compose the lyrics and music for a new edgy Broadway-bound musical, based on the life and art of one of the most influential artists of the late 20th century – Jean-Michel Basquiat.

Strongly committed to the arts, philanthropy, education, and mentoring of young musicians, Batiste is currently the Artistic Director At Large of the National Jazz Museum in Harlem and Musical Director for The Atlantic. His accolades also can’t go unnoticed – he’s been awarded the American Jazz Museum Lifetime Achievement Award, the Harry Chapin ASCAP Humanitarian Award and made the coveted Forbes “30 Under 30” list.

Batiste has received both his undergraduate and masters degrees in piano from the Juilliard School. He currently resides in Brooklyn, New York.

Hailing from New Orleans, Tank and The Bangas have all the qualities that relate them to the city that birthed them, yet a flair that separates them as well. The Bangas are a blend of R&B, funk, spoken word, rap and many other genres. Combining the various musical techniques among the Bangas, coupled with the poetic, clever lyrics from the lead vocalist, Tank and The Bangas have quilted a unique sound that separates them as one of the most distinctive groups to come out of New Orleans. They unanimously won NPR’s Tiny Desk contest with “Quick,” a riotous single, about which NPR’s Bob Boilen proclaimed, “This band combines R&B with hip-hop’s poetry and rollercoaster storytelling, with a flair and alchemy that could only come from New Orleans.”

Since winning Tiny Desk in 2017, the band released their major label debut on Verve Forecast, Green Balloon, and they have been selling out venues stateside and internationally, including festival appearances at Coachella, Bonnaroo, Newport Folk Festival and more. Last year, they were included on Rolling Stone’s list of the “10 Artists You Need To Know,” who called them “A secular church experience, with freewheeling improvisational chops and positive vibes” and were featured in the August print issue of Vanity Fair. Tarriona “Tank” Ball was featured in Vogue’s September issue earlier this year.


Major support for the Angélique Kidjo Perspectives series has been provided by the Howard Gilman Foundation.

Photo of Terence Blanchard by Henry Adabonojo; Jon Batiste by Abby Ross; Tank and The Bangas by Alex Marks.