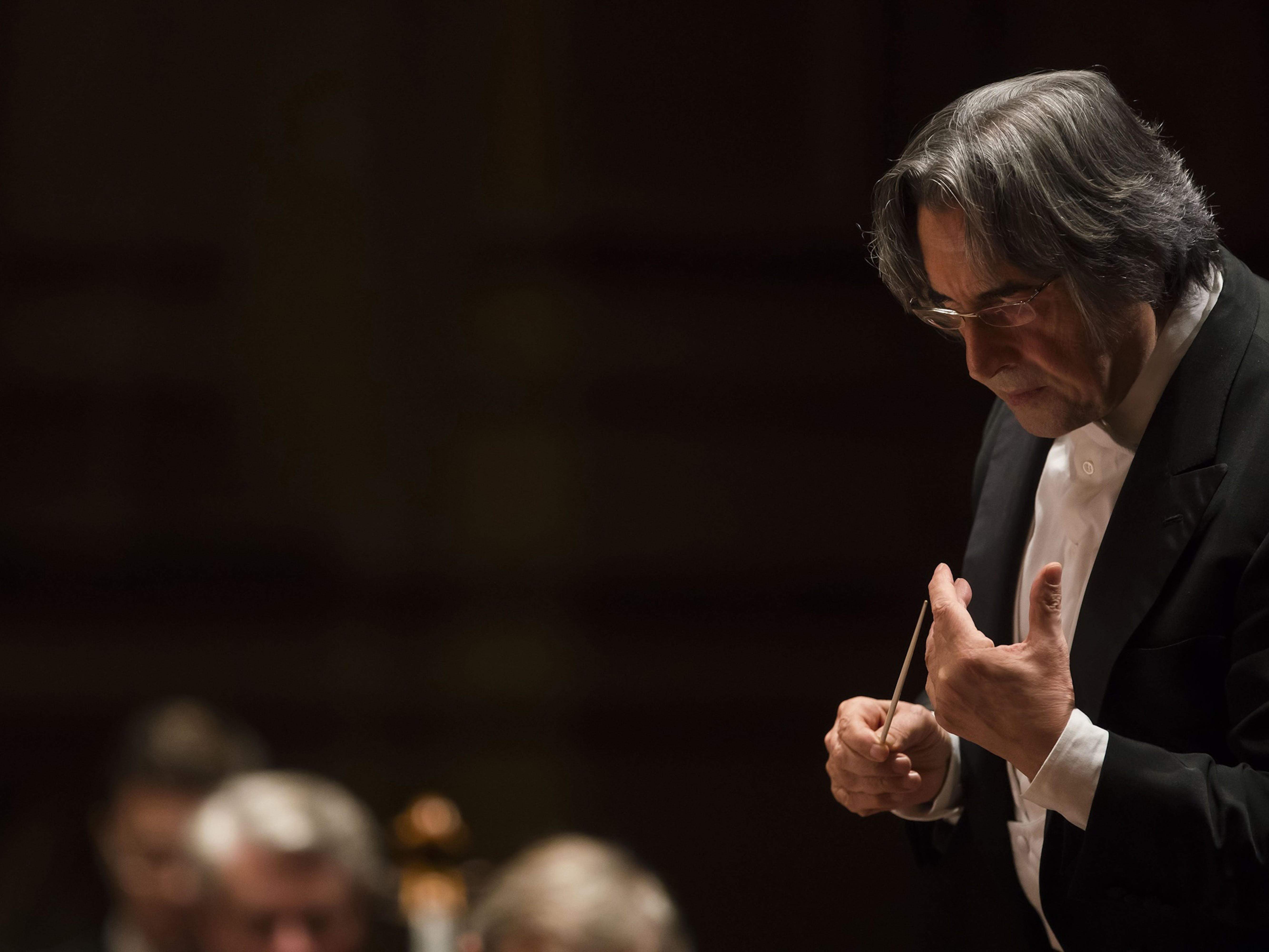 (New York, NY, October 29, 2019) This November, Music Director Riccardo Muti and the Chicago Symphony Orchestra return to Carnegie Hall for two concerts in Stern Auditorium / Perelman Stage. The first evening, on Friday, November 15 at 8:00 p.m., features music inspired by Rome, including Berlioz’s La mort de Cléopâtre, written in 1829 as a bid for a Prix de Rome, with Perspectives artist mezzo-soprano Joyce DiDonato; Bizet’s rarely performed symphonic poem Roma; and Respighi’s Pines of Rome, one of three symphonic poems written by the Italian composer about different aspects of the Eternal City. Maestro Muti and the Orchestra return on the following night, Saturday, November 16 at 8:00 p.m., with an all-Prokofiev program featuring selections from Romeo and Juliet and Symphony No. 3.

This performance is also part of Joyce DiDonato’s Perspectives series at Carnegie Hall with concerts and events throughout the 2019–2020 season that highlight her full range of vocal artistry, as well as her work as an educator. For more information on upcoming Perspectives performances, please visit: carnegiehall.org/didonato.

About the Artists
Born in Naples, Italy, Riccardo Muti is one of the preeminent conductors of our day. In 2010, when he became the tenth music director of the Chicago Symphony Orchestra (CSO), he had more than forty years of experience at the helm of Maggio Musicale Fiorentino (1968–80), the Philharmonia Orchestra (1973–82), The Philadelphia Orchestra (1980–92), and Teatro alla Scala (1986–2005).

Mr. Muti studied piano under Vincenzo Vitale at the Conservatory of San Pietro a Majella in his hometown of Naples, graduating with distinction. After he won the Guido Cantelli Conducting Competition—by unanimous vote of the jury—in Milan in 1967, his career developed quickly. In 1968, he became principal conductor of Florence’s Maggio Musicale, a position that he held until 1980.

Herbert von Karajan invited him to conduct at the Salzburg Festival in Austria in 1971, and Mr. Muti has maintained a close relationship with the summer festival and with its great orchestra, the Vienna Philharmonic, for more than 45 years. When he conducted the orchestra’s 150th anniversary concert in 1992, he was presented with the Golden Ring, a special sign of esteem and affection, and in 2001, his outstanding artistic contributions to the orchestra were further recognized with the Otto Nicolai Gold Medal. He is also a recipient of a silver medal from the Salzburg Mozarteum for his contribution to the music of Mozart and the Golden Johann Strauss Award by the Johann Strauss Society of Vienna. He is an honorary member of Vienna’s Gesellschaft der Musikfreunde (Society of the Friends of Music), the Vienna Hofmusikkapelle, the Vienna Philharmonic, and the Vienna State Opera.

Mr. Muti succeeded Otto Klemperer as chief conductor and music director of London’s Philharmonia Orchestra in 1973, holding that position until 1982. From 1980 to 1992, he was music director of The Philadelphia Orchestra, and, in 1986, he became music director of Milan’s Teatro alla Scala. During his 19-year tenure, Muti conducted operatic and symphonic repertoire ranging from the baroque to the contemporary, also leading hundreds of concerts with the Filarmonica della Scala and touring the world with both the opera company and the orchestra. His tenure as music director, the longest of any in La Scala’s history, culminated in the triumphant reopening of the restored opera house with Antonio Salieri’s Europa riconosciuta, originally commissioned for La Scala’s inaugural performance in 1778.

Riccardo Muti’s vast catalog of recordings, numbering in the hundreds, ranges from the traditional symphonic and operatic repertoires to contemporary works. He also has written three books, Verdi, l’italiano and Riccardo Muti: An Autobiography: First the Music, Then the Words, both of which have been published in several languages, as well as Infinity Between the Notes: My Journey Into Music, published May 2019 and available in Italian.

During his time with the CSO, Mr. Muti has won over audiences in greater Chicago and across the globe through his music making as well as his demonstrated commitment to sharing classical music. His first annual free concert as CSO music director attracted more than 25,000 people to Chicago’s Millennium Park. He regularly invites subscribers, students, seniors, and people of low incomes to attend, at no charge, his CSO rehearsals. Mr. Muti’s commitment to artistic excellence and to creating a strong bond between an orchestra and its communities continues to bring the Chicago Symphony Orchestra to ever higher levels of achievement and renown.

Multi Grammy Award winner and 2018 Olivier Award winner for Outstanding Achievement in Opera, Kansas-born Joyce DiDonato entrances audiences across the globe and has been proclaimed “perhaps the most potent female singer of her generation” by The New Yorker. With a voice “nothing less than 24-carat gold” according to The Times (London), Ms. DiDonato has soared to the top of the industry both as a performer and a fierce advocate for the arts, gaining international prominence in operas by Handel and Mozart, as well as through her wide-ranging, acclaimed discography. She is also widely acclaimed for the bel canto roles of Rossini and Donizetti.

Much in demand on the concert and recital circuit, she has recently held residencies at Carnegie Hall and at London’s Barbican Centre, toured extensively in the United States, South America, Europe and Asia and appeared as guest soloist at the BBC’s Last Night of the Proms. Recent concert highlights include the Chicago Symphony Orchestra under Ricardo Muti, the Berliner Philharmoniker under Sir Simon Rattle, Orchestre Révolutionnaire et Romantique under Sir John Eliot Gardiner, The Philadelphia Orchestra under Yannick Nézet-Séguin, and the Accademia Nazionale di Santa Cecilia and Carnegie Hall’s National Youth Orchestra of the United States of America (NYO-USA) under Sir Antonio Pappano.

In opera, Ms. DiDonato’s recent roles include Didon in Les Troyens at the Vienna State Opera; Sesto in Cendrillon and Adalgisa in Norma at the Metropolitan Opera, Agrippina in concert with Il Pomo d’Oro under Maxim Emelyanchev; Sister Helen in Dead Man Walking at the Teatro Real Madrid and London’s Barbican Centre; Semiramide at the Bavarian State Opera and Royal Opera House, and Charlotte in Werther at the Royal Opera.

Ms. DiDonato’s 2019–2020 season sees her staged debut as Agrippina in a new production at the Royal Opera House, returns to the Metropolitan Opera as Agrippina and Charlotte in Werther, and performances as Semiramide at the Liceu Barcelona. This season also holds the final tour with Il Pomo d’Oro of her album In War & Peace to South America culminating in Washington DC as well as a European and US tour of My Favorite Things. Other highlights include a tour with the Orchestre Métropolitain under Nézet-Séguin; touring her latest album release Songplay in Europe, and recorded concerts of Berlioz’s Roméo & Juliette with John Nelson and the Orchestre Philharmonique de Strasbourg.

An exclusive recording artist with Erato/Warner Classics, Ms. DiDonato’s award-winning discography includes Les Troyens, which in 2018 won the Recording (Complete Opera) category at the International Opera Awards; the Opera Award at the BBC Music Magazine Awards; and Gramophone’s Recording of the Year. An extensive recording artist, other recent albums include Songplay, In War & Peace which won the 2017 Best Recital Gramophone Award, Stella di Napoli, her Grammy-Award-winning Diva Divo and Drama Queens. Other honors include the Gramophone Artist of the Year and Recital of the Year awards, and an induction into the Gramophone Hall of Fame.

Founded by Theodore Thomas in 1891, the Chicago Symphony Orchestra is consistently hailed as one of the greatest orchestras in the world. Since 2010, the pre-eminent conductor Riccardo Muti has served as its 10th music director. Missy Mazzoli is Mead Composer-in-Residence.

From baroque through contemporary music, the CSO commands a vast repertoire. Its renowned musicians annually perform more than 150 concerts, most at Symphony Center in Chicago and, each summer, at the Ravinia Festival in the suburbs, north of Chicago. The orchestra regularly tours nationally and internationally. Since 1892, the CSO has made 60 international tours, performing in 29 countries on five continents.

People around the globe listen to weekly radio broadcasts of CSO concerts and recordings on the WFMT radio network and online. Recordings by the CSO have earned 62 Grammy Awards, including two in 2011 for Mr. Muti’s recording with the CSO and Chorus of Verdi's Messa da Requiem (Mr. Muti’s first of eight releases with the CSO to date).

The CSO is part of the Chicago Symphony Orchestra Association, which also includes the Chicago Symphony Chorus (Duain Wolfe, Director and Conductor) and the Civic Orchestra of Chicago, a training ensemble for emerging professionals. Through its prestigious Symphony Center Presents series, the CSOA presents guest artists and ensembles from a variety of genres—classical, jazz, world, and contemporary.

The Negaunee Music Institute at the CSO offers community and education programs that annually engage more than 200,000 people of diverse ages and backgrounds. Through the Institute and other activities, including a free annual concert led by Muti, the CSO is committed to using the power of music to create connections and build community.

The CSO is supported by thousands of patrons, volunteers and institutional and individual donors. The CSO’s music director position is endowed in perpetuity by a generous gift from the Zell Family Foundation. The Negaunee Foundation provides generous support in perpetuity for the work of the Negaunee Music Institute.