Carnegie Hall Unveils Full Schedule of 70+ Events for its Beethoven Celebration in Honor of the 250th Anniversary of the Composer's Birth, January - June 2020 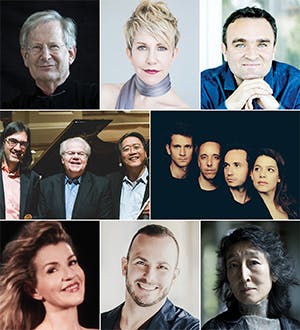 (December 4, 2019; NEW YORK, NY) — As the 250th anniversary year of Beethoven’s birth approaches, Carnegie Hall announces a wider schedule of partner events by leading cultural institutions, complementing the Hall’s programming as part of its Beethoven Celebration which includes an unprecedented range of performances by renowned artists exploring the composer’s works and his transformative impact on music. The Beethoven Celebration presents one of the largest explorations of the great master’s music in our time and marks the largest-ever exploration of one composer by Carnegie Hall, with 86 works of music performed by more than 58 artists and ensembles in New York City and beyond from January through June 2020.

Beyond Carnegie Hall, public programming, performances, exhibitions, and events at partner organizations—leading cultural and academic institutions in New York City and beyond—highlight the many dimensions of the great music master. The more than 35 partner events range from music and dance to poetry, exhibitions, and talks, many of which have a contemporary slant. Together, the Beethoven Celebration features more than 70 programs, creating an extraordinary view of this revolutionary composer.

“This rich series of events across New York City celebrates Beethoven’s unique place in the pantheon of the greatest artists in history as a composer whose music, perhaps more than any other, changed the course of Western classical music,” said Clive Gillinson, Executive and Artistic Director of Carnegie Hall. “Beethoven was audacious and absolutely fearless, a true revolutionary who never stopped challenging himself and who redefined every area of music that he touched. His music is timeless, and he continues to connect people worldwide with sounds that remain idealistic, compelling, fearsome, and personal. It’s no surprise that people around the globe continue to turn to his music to celebrate some of the most important turning points in history. We hope this opportunity to immerse ourselves in his music during this anniversary year will highlight the transformational impact he has had on culture, inspiring fresh perspectives on his life and work.”

At Carnegie Hall, the Beethoven Celebration features more than 35 events including two complete symphony cycles, the complete piano sonatas and complete string quartets, chamber music, choral works, plus additional concerts and lectures as well as an ambitious global project that explores the themes found in Beethoven’s “Ode to Joy,” led by Marin Alsop.

A highlight of the Beethoven Celebration—never before presented by Carnegie Hall in one season—are two complete symphony cycles, one in February 2020 by Sir John Eliot Gardiner and his Orchestre Révolutionnaire et Romantique (ORR), performed on period instruments, and another in March and April 2020 by Yannick Nézet-Séguin and The Philadelphia Orchestra, contrasting their two different interpretive perspectives on these pillars of the orchestral repertoire.

A key figure both in the early music revival and as a pioneer of historically informed performances, Sir John Eliot Gardiner leads his internationally acclaimed early music ensemble ORR in Beethoven’s Symphony No. 1, along with the rarely-heard score for the ballet, The Creatures of Prometheus (February 19 at 8:00 p.m.). The six-day symphony cycle in Stern Auditorium/Perelman Stage continues with the Symphony Nos. 2 and No. 3, “Eroica” (February 20 at 8:00 p.m.); Symphony Nos. 4, and 5—with its famous opening motif—(February 21 at 8:00 p.m.); Symphony No. 6, “Pastoral” and No. 7 (February 23 at 2:00 p.m.); and Symphony Nos. 8 and 9 (February 24 at 8:00 p.m.). The soloists for the Ninth Symphony include soprano Lucy Crowe, contralto Jess Dandy, tenor Ed Lyon, and bass Tareq Nazmi alongside The Monteverdi Choir. As a prelude to the cycle, Maestro Gardiner will be joined by distinguished Beethoven scholar William Kinderman for a discussion in Weill Recital Hall that illuminates Gardiner’s approach to these symphonic masterworks (February 18 at 7:00 p.m.). These Beethoven Celebration events comprise Sir John Eliot Gardiner’s Perspectives series, which the celebrated conductor has curated for the 2019-20 season.

Additional highlights at Carnegie Hall include:

An evening of American poetry and Beethoven recordings that focuses on the themes of healing, gratitude and self-discovery, incorporating manuscripts and rare recordings from The New York Public Library’s archival collections.

Presented by Read650 and The New York Public Library for the Performing Arts, Songs of Gratitude is a New Year’s celebration of healing arts: a curated series of five-minute, 650-word stories of gratitude from a cast of talented essayists, memoirists, and novelists—including Jamie Bernstein—followed by the New York Classical Players’ performance of Beethoven’s profound String Quartet No. 15, Op. 132, of which the central movement, written in the painful last years of his life, is a “holy song of gratitude.”


FEBRUARY:
Conversations With…
February 7 at 6:30 p.m., Gallery 684, The Metropolitan Museum of Art

A special tour of The Met’s newly renovated Musical Instruments Galleries—from gut strings to horns without valves, offers the opportunity to explore orchestral instruments as Beethoven would have known them, and to trace the development of their modern counterparts with The Met’s curator Bradley Strauchen-Scherer.

Presented by NYTB/CHAMBER WORKS as part of its 40th anniversary, Double Andante is a commissioned work choreographed by Pam Tanowitz in 2015. The 13-minute ballet, played live on piano two times at different tempos, is for 10 dancers set to the Andante of Beethoven’s Piano Sonata No. 15 in D Major, Op. 28.

This three-session course considers the musical, technological, artistic, and social environment in which Beethoven’s first performers and audiences experienced his music. The Met’s curators Jayson Dobney and Bradley Strauchen-Scherer draw on instruments and art from across The Met’s collection to explore this interwoven narrative. The course includes demonstrations and performances of Beethoven’s chamber music on period instruments.

Beethoven at the Library
February 29 at 2:30 p.m., Bruno Walter Auditorium, The New York Public Library for the Performing Arts

Beethoven at the Library features pianist Evelyn Chen, violinist Richard Lin and cellist Brinton Averil Smith performing Beethoven’s Piano Trio in B-flat Major, Op. 97, “Archduke,” accompanied by recitations of his letters and journal entries. Beethoven’s extensive sketches of the famous “Archduke” Trio are among the library’s most treasured artifacts and the trio’s concert is performed in conjunction with a one-day-only pop-up exhibition of the composer’s manuscripts.

Presented by The Brooklyn Institute for Social Research, this four-week course explores Beethoven’s music in the context of the ideas, art, and political struggles that shaped it. Through a selective study of the symphonies, piano sonatas, string quartets, and Missa solemnis, the course offers the opportunity to consider his music’s relationship to the Enlightenment, political revolution, musical technology, Romanticism, and the contemporary avant-garde.

St. Luke’s Chamber Ensemble, joined by pianist Paavali Jumppanen, performs Beethoven’s Symphony No. 3 in E-flat Major, Op. 55, “Eroica” (in a chamber arrangement by Beethoven’s friend and student, Ferdinand Ries) and Quintet for Piano and Winds in E-flat Major, Op. 16. Running in conjunction with this performance at The Morgan Library & Museum is the Morgan’s collection of autograph manuscripts by Beethoven which are on view from January 21-April 26.

Beethoven and Beyond: a Symposium
March 28 at 11:00 a.m., Goethe-Institut New York

This daylong symposium, featuring scholars, artists, and critics, explores Beethoven’s transformational impact on Western music, artistry, culture, and sensibility. What explains his extraordinary singularity? From what cultural, political, and philosophical sources did Beethoven draw? In what ways did he “invent” the modern artist and celebrity—and why does he stand, to this day, as a symbol of artistic autonomy and mercurial genius?

In celebration of the reopening of The Metropolitan Museum of Art’s British Galleries, MetLiveArts presents two intimate, in-gallery performances featuring music that would have been originally heard in London’s opulent homes. The first of these two performances take place on March 28 and features the Spektral Quartet performing a program that includes Beethoven’s last major work, the String Quartet in F Major, Op. 135—an intellectually confounding and emotionally ravaging piece with sharp contrasts of lightness and darkness.


APRIL:
Can & Able! The Resilience of the Gift
April 13 at 6:00 p.m., Bruno Walter Auditorium, The New York Public Library for the Performing Arts

Can & Able! The Resilience of the Gift, presented by The New York Public Library for the Performing Arts and the National Black Theatre, brings together differently abled Black artists for an evening of new, multidisciplinary micro-commissions inspired by Beethoven’s resilience to create in spite of his health challenges. Drawing from the composer’s personal journal and his late period “Archduke” Trio, the artists celebrate how art can change the world “in spite of.”

In an exploration of Beethoven’s literary afterlife through the lens of chamber music, Beethoven’s Literary Afterlife examines the formation of a musical legacy, including lectures by Columbia professors Nicholas Dames and Arden Hegele, and Rutgers professor Nicholas Chong, as well as a performance of the composer’s Violin Sonata No. 7, Op. 30, No. 2 by violinist Chad Hoopes and pianist Anne-Marie McDermott. This event is presented by The Society of Fellows and the Heyman Center for the Humanities and the Italian Academy for Advances Studies in America, Columbia University.

Beethoven in the Yiddish Imagination
April 20 at 7:00 p.m., YIVO Institute for Jewish Research at the Center for Jewish History

The evening’s program is a celebration of Beethoven in the Yiddish imagination, including a Yiddish translation of “Ode to Joy” and a bilingual reading of a Yiddish story about the “Moonlight” Sonata. An die ferne Geliebte and the String Quartet in C-sharp Minor, Op. 131, will also be performed following a discussion of the largely unknown Jewish influences on these works.

Dance with MMDG-Family Class
May 9 at 3:00 p.m. at Mark Morris Dance Center

Company members of Mark Morris Dance Group will teach a class for families accompanied by live music. People of all ages and dance levels, with and without disabilities, will learn excerpts of the vignettes from Morris’s The Muir, set to Beethoven’s arrangements of Irish and Scottish folk songs.


BEETHOVEN CELEBRATION APPLE MUSIC PLAYLISTS:
Complementing this exciting array of partner events, Apple Music will celebrate Beethoven with exclusive recordings, videos, playlists, radio stations, and more. Co-curated with Carnegie Hall, Apple Music’s Beethoven radio station will feature a wealth of recordings during the anniversary year. In addition, Carnegie Hall will curate its own playlist focused on the master composer, featuring recordings by internationally renowned musicians performing at the Hall throughout the season (www.applemusic.com/beethoven2020).

For a full schedule of Beethoven Celebration events, click here.