Musical Explorers Family Concerts on Saturday, January 18 Introduce Children to Music From Around the World

Plus, More than 150,000 Students Across the US Participate in Musical Explorers Through Newly Launched Free Digital Platform 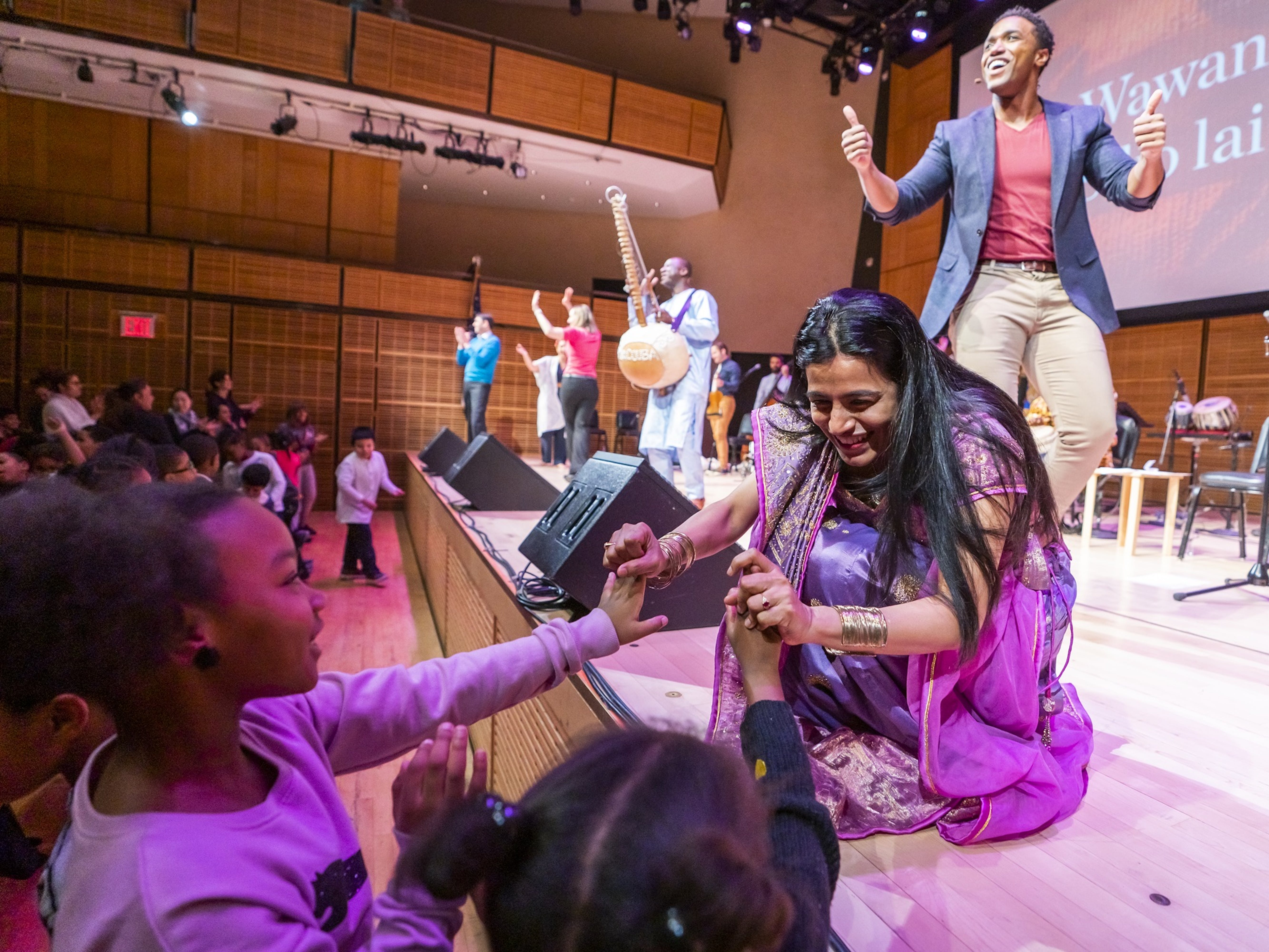 On Saturday, January 18, 2020 at 12:00 p.m. and 3:00 p.m., three vibrant New York City-based musical groups will perform in Zankel Hall as part of the Musical Explorers Family Concert, an interactive experience celebrating music from around the world. The performance features cumbia with Gregorio Uribe, Armenian folk with Zulal, and hip-hop with Soul Science Lab. Free pre-concert activities are offered one hour prior to each performance, preparing parents and children to sing and dance along with the artists.

New York City public school students in grades K–2 have been learning about these same artists throughout the semester as part of the Musical Explorers program, which teaches basic music skills in the classroom as children study songs from these musical genres, reflect on their own communities, and develop singing and listening skills. From Tuesday, January 14, 2020 to Friday, January 17, 2020 thousands of children will visit Carnegie Hall for high-energy culminating concerts with their classes. For more than a decade, Musical Explorers has been taught in New York City classrooms, and this season, the program will reach more than 5,500 students across New York City.

Musical Explorers has expanded nationally this year with a new digital platform that provides teachers with free online classroom resources, including lesson plans, artist-led videos, and digital concert experiences filmed live at Carnegie Hall. Hundreds of teachers across the US are utilizing Carnegie Hall’s first all-digital curriculum, bringing musical traditions from around the world to their classroom. Altogether, more than 150,000 students will participate in Musical Explorers through the online platform during the 2019–2020 season.

About the Artists
Colombian singer, songwriter, and accordionist Gregorio Uribe has forged a unique place in the music scene of both the US and Latin America. Founder and leader of the Gregorio Uribe Big Band, a 16-piece orchestra that blends cumbia and other Colombian rhythms with powerful big band arrangements, he released the album Cumbia Universal featuring eight-time Grammy winner Rubén Blades. Gregorio’s next project is an album with a smaller ensemble that highlights his songwriting and his signature instrument, the accordion. His music has also been showcased in documentaries and TV series, including FX’s Mayans M.C. and CBS’s MacGyver.

Zulal, which means “clear water,” is an Armenian a cappella trio that features Teni Apelian, Yeraz Markarian, and Anaïs Tekerian. The trio rearranges and re-imagines traditional Armenian folk melodies for stage and recordings. Performing since 2002, Zulal has performed at venues such as The Kennedy Center’s Millennium Stage, Smithsonian Folklife Festival, and The Metropolitan Museum of Art. In addition to performing and arranging, Zulal also creates soundtracks for film and theater, and offers educational workshops for young audiences.

Soul Science Lab is the multimedia duo of artist, educator, and creative director Chen Lo and multi-instrumentalist, composer, and educator Asanté Amin. The group’s work draws on the full lineage of black American music, from West African roots to contemporary hip-hop. Between them, they have shared the stage with The Roots, Common, Erykah Badu, KRS-One, A Tribe Called Quest, Mos Def, Raheem DeVaughn, Wynton Marsalis, and dead prez, and have performed on major stages, including Lincoln Center, BAM, and the Apollo Theater. Together, they created the groundbreaking production Soundtrack ’63, combining music and visuals to explore the black experience in the US from slavery to the #BlackLivesMatter movement.

Carnegie Hall’s Weill Music Institute (WMI) creates visionary programs that embody Carnegie Hall’s commitment to music education, playing a central role in fulfilling the Hall’s mission of making great music accessible to as many people as possible. With unparalleled access to the world’s greatest artists, WMI’s programs are designed to inspire audiences of all ages, nurture tomorrow’s musical talent, and harness the power of music to make a meaningful difference in people’s lives. An integral part of Carnegie Hall’s concert season, these programs facilitate creative expression, develop musical skills and capacities at all levels, and encourage participants to make lifelong personal connections to music. The Weill Music Institute generates new knowledge through original research and is committed to giving back to its community and the field, sharing an extensive range of online music education resources and program materials for free with teachers, orchestras, arts organizations, and music lovers worldwide. More than 600,000 people each year engage in WMI’s programs through national and international partnerships, in New York City schools and community settings, and at Carnegie Hall. This includes more than half a million students and teachers worldwide who participate in WMI’s Link Up music education program for students in grades 3 through 5, made possible through Carnegie Hall partnerships with over 115 orchestras in the US from Alaska to Puerto Rico, as well as internationally in Brazil, Canada, China, Japan, Kenya, and Spain.

Carnegie Hall Family Concerts are made possible, in part, by endowment gifts from Linda and Earle S. Altman, The Irene Diamond Fund, Mr. and Mrs. Lester S. Morse Jr., and the Henry and Lucy Moses Fund.

Photo at top of release by Chris Lee.

Tickets, priced at $10, are general admission and available at the Carnegie Hall Box Office, 154 West 57th Street, or can be charged to major credit cards by calling CarnegieCharge at 212-247-7800 or by visiting the Carnegie Hall website, carnegiehall.org.