Young Singers and Pianists from Around the Globe Selected to Participate 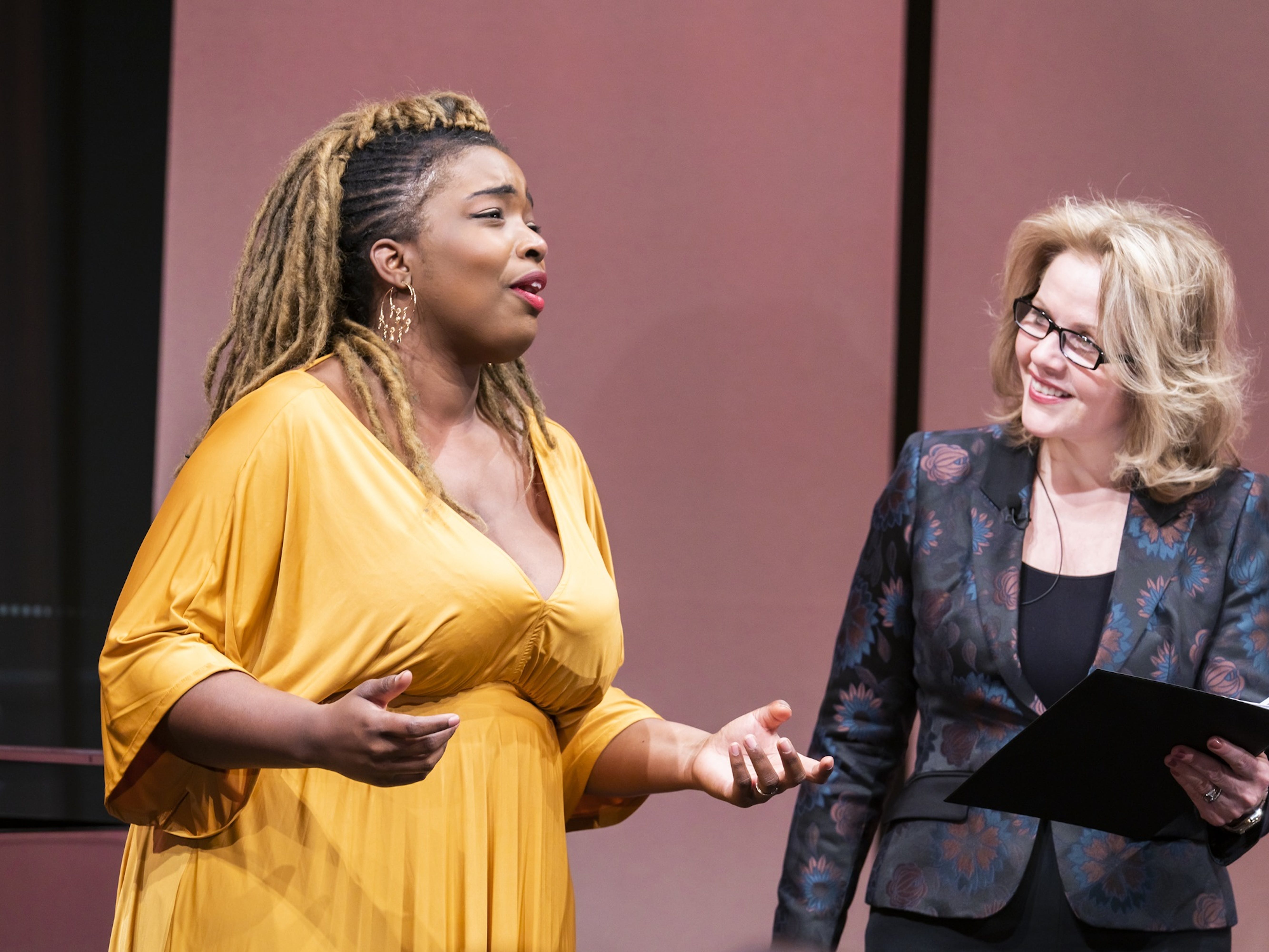 (New York, NY, December 18, 2019)—From January 13–18, 2020, renowned soprano Renée Fleming will mentor 10 aspiring young singers and 10 collaborative pianists from around the world in the second year of SongStudio, an innovative program exploring the future of the vocal recital. Building on Marilyn Horne’s remarkable work with The Song Continues, the intensive workshop will bring emerging vocalists and pianists together with leading artists and composers for a week of instruction and performance at Carnegie Hall.

“I’m hoping to spark more creative thinking about the art form and how it can be expanded,” said Renée Fleming. “I want to encourage singers to be intellectually curious and adventurous in their approach to song repertoire; to think outside the box in their choice of repertoire, including music beyond the standard classical literature; and to experiment with new performance elements.”

The week will feature vocalists, collaborative pianists, and other artists from a wide variety of disciplines lending their insights and expertise. Gabriel Kahane will serve as SongStudio’s composer-in-residence, working with the singers and pianists on selections from his diverse vocal music. On Tuesday, January 14 at 7:30 p.m., he will join Ms. Fleming for a discussion and master class dedicated to his vocal writing, with performances by SongStudio artists.

Sopranos Julia Bullock and Renée Fleming will be in conversation on Thursday, January 16 at 7:30 p.m. to discuss Ms. Bullock’s recent production, Zauberland, as well as her approach to creative programming and choosing collaborators.

All participating singers and pianists will receive private coaching throughout the week, learning from teachers, coaches, and collaborative pianists Javier Arrebola, Craig Terry, Hartmut Höll, and Gerald Martin Moore. Brian Zeger and Craig Terry will lead sessions on recital programming with the SongStudio artists. There will be a master class by Mr. Höll, focused on the art of the collaborative pianist, on Friday, January 17 at 4:00 p.m.  At 7:30 p.m. that evening, Ms. Fleming will lead a public master class for participants.

The week will culminate in a final “Young Artist Recital” on Saturday, January 18 at 8:00 p.m. in Zankel Hall.

Following a rigorous audition process open to talented young singers and collaborative pianists from around the world, twenty artists have been selected to participate and paired by faculty, coming from Russia, Armenia, Canada, Colombia, Australia, Japan, Germany, the United Kingdom, and the United States:

About the Artist
Renée Fleming is one of the most highly acclaimed singers of our time, performing on the stages of the world’s greatest opera houses and concert halls. Winner of four Grammy Awards, and recipient of the US National Medal of Arts from President Obama, she has sung for momentous occasions from the Nobel Peace Prize ceremony to the Diamond Jubilee Concert for HM Queen Elizabeth II at Buckingham Palace. In 2014, Ms. Fleming brought her voice to a vast new audience as the first classical artist ever to sing the US National Anthem at the Super Bowl.

In March and April, Ms. Fleming will tour Europe and the US in recital with pianist Evgeny Kissin. Her schedule this season includes concerts in Beijing, New York, Boston, Vienna, and Paris. Last summer, she performed the world premieres of André Previn’s Penelope and Kevin Puts’s The Brightness of Light at Tanglewood. In April, she appeared opposite Ben Whishaw in Norma Jean Baker of Troy to open The Shed in New York City. In June, she made her London musical theater debut as Margaret Johnson in The Light in the Piazza, bringing her acclaimed portrayal to Los Angeles and Chicago in the fall. She earned a Tony Award nomination for her performance in the 2018 Broadway production of Carousel. Her new album, Lieder: Brahms, Schumann, and Mahler, was released by Decca in June. She can be heard on the soundtracks of the 2018 Best Picture Oscar winner The Shape of Water as well as the recent films Three Billboards Outside Ebbing, Missouri, and Bel Canto.

Ms. Fleming is a member of the Board of Trustees of Carnegie Hall. This summer, she was appointed co-Artistic Director of the Aspen Opera Center. As Artistic Advisor to the John F. Kennedy Center for the Performing Arts, she spearheads a collaboration with the US National Institutes of Health focused on music, health, and neuroscience. In 2010, she was named the first-ever creative consultant at Lyric Opera of Chicago. Her numerous awards include the Fulbright Lifetime Achievement Medal, Germany’s Cross of the Order of Merit, and France’s Chevalier de la Légion d’Honneur.

As “one of the finest, most searching songwriters of the day,” (The New Yorker) Gabriel Kahane cites a host of influences in his compositional practice, from German lieder to contemporary pop. The inventive composer joins Renée Fleming in a conversation about how the worlds of singer-songwriters and art song composers intersect and inform one another. SongStudio participants will perform selections of Kahane’s work.

Elina Garanca dazzles audiences whenever she graces the Carnegie Hall stage. This year, she returns not to perform, but to teach the next generation of rising opera stars. Bringing her signature “rich sound, [and] an unerring feel for the nuance and subtext of a phrase,” (The New York Times) the mezzo-soprano shares her expertise with SongStudio’s young vocalists in a public master class.

Soprano Julia Bullock is a “musician who delights in making her own rules” (The New Yorker). In this conversation with Renée Fleming, the innovative vocalist discusses Zauberland, her boundary-pushing project that interweaves Schumann’s Dichterliebe with contemporary songs and vignettes about the global migration crisis. Bullock and Fleming also reflect on their unique approaches to programming songs and choosing collaborators.

Hartmut Höll has been praised as a “superb pianist” and “emphatically a partner, not an accompanist” (The Financial Times). From performances with legendary baritone Dietrich Fischer-Dieskau to recitals with SongStudio host Renée Fleming, his career has been characterized by remarkable collaboration. In this workshop, Höll draws on his decades of experience to coach singers and pianists on the keys to successful partnerships and inspiring performances.

Renée Fleming launched SongStudio to “encourage singers to be intellectually curious and adventurous in their approach to song repertoire.” In this master class, the renowned soprano creates a space for exploration and experimentation, coaching young vocalists and collaborative pianists to hone their craft while embracing innovation and vulnerability.

Marking the culmination of the second year of the SongStudio program, Renée Fleming hosts a recital that features the 10 emerging vocalists and 10 collaborative pianists who have trained with her throughout the weeklong intensive workshop. Marvel at these artists’ talent and glimpse the bright future of this time-honored, evolving art form.

Lead support for SongStudio is provided by Mr. and Mrs. Anthony B. Evnin and A.E. Charitable Foundation.

SongStudio is part of the Marilyn Horne legacy at Carnegie Hall.