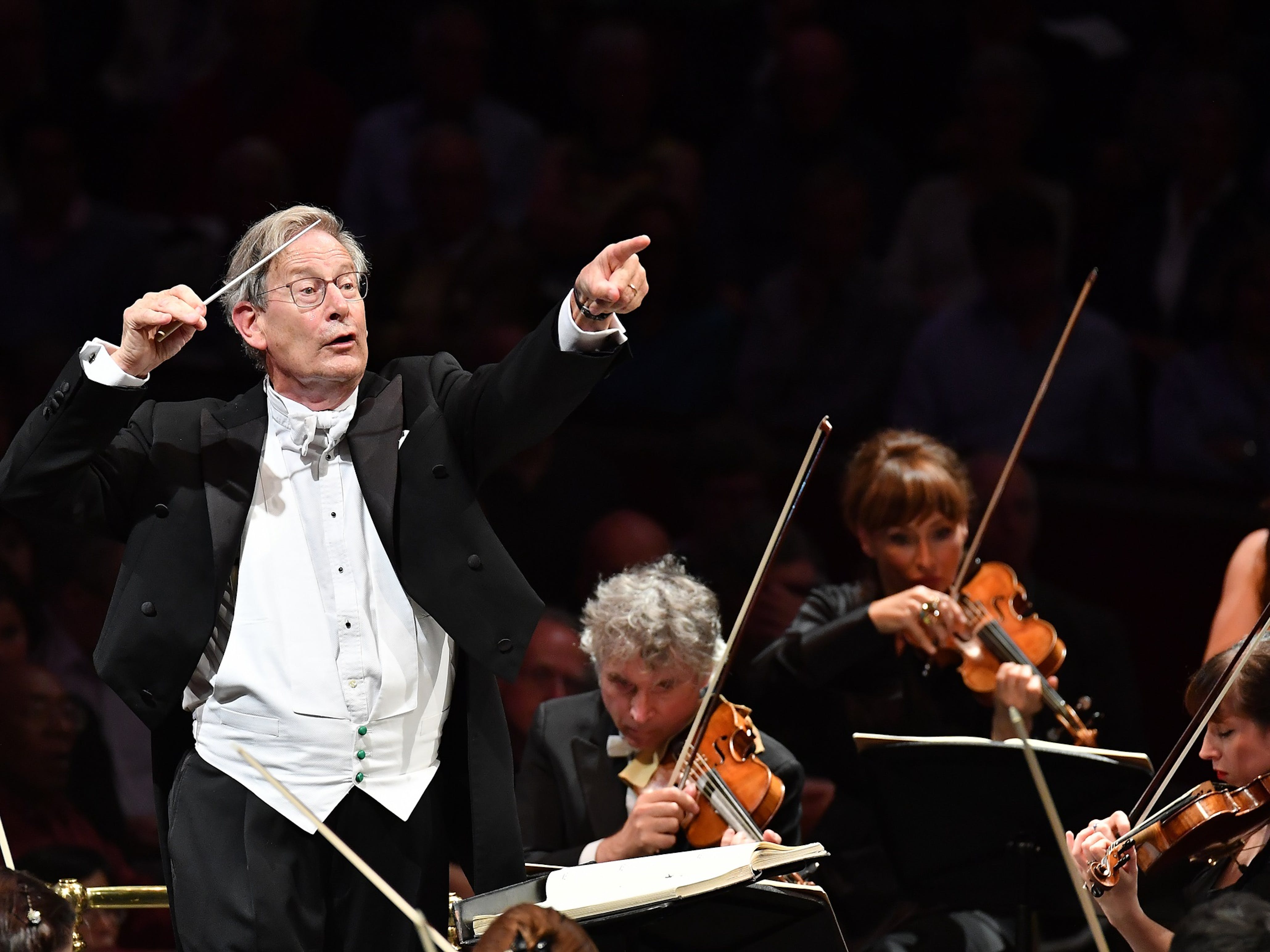 Grounded in Maestro Gardiner’s exacting study of Beethoven’s original manuscripts, the symphonies will be performed as the composer would have experienced them, played on period instruments, including valveless brass, woodwinds without additional keys and levers, gut strings, and hide-covered timpani struck with hard sticks.

A key figure both in the early music revival and as a pioneer of historically informed performances, Maestro Gardiner kicks off the ORR’s five-concert series on Wednesday, February 19 at 8:00 p.m. with selections from Beethoven’s rarely heard ballet score, The Creatures of Prometheus; the concert aria, "Ah! perfido;" excerpts from Leonore; and the composer’s Symphony No. 1; Soprano Lucy Crowe joins the orchestra as soloist. On Thursday, February 20 at 8:00 p.m., the orchestra performs Beethoven’s Symphony No. 2 and Symphony No. 3, "Eroica." The series continues Friday, February 21 at 8:00 p.m. with symphonies Nos. 4 and 5. On Sunday, February 23 at 2:00 p.m., the program includes Symphony No. 6, "Pastoral" and Symphony No. 7. For the series’ final concert on Monday, February 24 at 8:00 p.m. the ORR’s Beethoven cycle culminates with the symphonies Nos. 8 and 9, with the orchestra joined by soprano Lucy Crowe, contralto Jess Dandy, tenor Ed Lyon, and bass Tareq Nazmi, alongside The Monteverdi Choir. As a prelude to the cycle, Maestro Gardiner will be joined by distinguished Beethoven scholar William Kinderman for a discussion in Carnegie Hall’s Weill Recital Hall to illuminate Sir John Eliot’s approach to these symphonic masterworks (Tuesday, February 18 at 7:00 p.m.).

The ORR’s final February 24 concert will be heard by listeners around the world as part of the ninth annual Carnegie Hall Live broadcast and digital series with a live radio broadcast on WQXR 105.9 FM in New York and online at wqxr.org and carnegiehall.org/wqxr. Produced by WQXR and Carnegie Hall and co-hosted by WQXR’s Jeff Spurgeon and Clemency Burton-Hill, select Carnegie Hall Live broadcasts featured throughout the season include special digital access to the broadcast team, from backstage and in the control room, connecting national and international fans to the music and to each other.

When asked to reflect on thirty years of music making with the ORR and his upcoming Beethoven symphony performances, Sir John Eliot Gardiner said “When we started the Orchestre Révolutionnaire et Romantique 30 years ago, our mission statement included trying to recover the world of Beethoven’s sound. Our aim was to provide bold new perspectives on the glorious orchestral works of the 19th and early 20th centuries. Since the ensemble’s inception, we have used our time together productively and creatively to explore fresh approaches to this much-loved music, some of it familiar but also some of it neglected or undervalued. Through the use and mastery of period instruments, the ORR musicians bring out the subtle and pervasive differences in the palette of sounds that composers as different as Beethoven, Berlioz, Schumann, Debussy, and Verdi were committed to revealing. Time and again, the players have shown vision and tenacity in demonstrating the techniques and sounds required to recapture the true essence of this music. Every time we embark on a fresh project together, I am amazed and touched by the way the players seem willing to put their necks on the block in order to bring this music back to intoxicating life once again.”

About Sir John Eliot Gardiner
Sir John Eliot Gardiner is revered as one of the world’s most innovative and dynamic musicians, constantly in the vanguard of enlightened interpretation and standing as a leader in contemporary musical life. His work, as founder and artistic director of the Monteverdi Choir, English Baroque Soloists (EBS) and Orchestre Révolutionnaire et Romantique (ORR), has marked him out as a key figure both in the early music revival and as a pioneer of historically informed performances.

As a regular guest of the world’s leading symphony orchestras, such as the London Symphony Orchestra, Symphonieorchester des Bayerischen Rundfunks, Royal Concertgebouw Orchestra and Gewandhausorchester Leipzig, Gardiner conducts repertoire from the 17th to the 20th centuries. He was awarded the Concertgebouw Prize in January 2016.

The extent of Gardiner’s repertoire is illustrated in the extensive catalogue of award-winning recordings with his own ensembles and leading orchestras including the Vienna Philharmonic Orchestra on major labels (including Decca, Philips, Erato and 30 recordings for Deutsche Grammophon), as wide-ranging as Mozart, Schumann, Berlioz, Elgar, and Kurt Weill, in addition to works by Renaissance and Baroque composers. His many recording accolades include two Grammy awards and he has received more Gramophone Awards than any other living artist.

Gardiner has also conducted opera productions at the Royal Opera House, Covent Garden; at the Vienna State Opera and at Teatro alla Scala, Milan. From 1983 to 1988 he was artistic director of Opéra de Lyon, where he founded its new orchestra.

In 2017, Gardiner and the Monteverdi ensembles celebrated the 450th anniversary of Monteverdi’s birth with staged performances of his three surviving operas across Europe and in the USA, a project that was recognized by the RPS Music Award in the Opera and Music Theatre category. 2018 saw Gardiner - along with the Monteverdi Choir and EBS - embark on a reprise of the landmark Bach Cantata Pilgrimage in some of Europe’s most famous concert halls and churches, before giving a number of critically-acclaimed performances of Verdi’s Requiem with the Monteverdi Choir and ORR including a landmark concert at Westminster Cathedral in aid of Cancer Research UK. Gardiner went on to demonstrate a renewed commitment to Berlioz’s music with an extensive tour of his major symphonic works (including Harold in Italy, Lélio and Symphonie fantastique) across Europe and the United States. In 2019 Gardiner conducted new productions of Handel’s Semele and Berlioz’s Benvenuto Cellini, and gave his debut performances in Colombia, Russia, Brazil, Uruguay, Argentina, and Chile.

An authority on the music of J. S. Bach, Gardiner’s book, Music in the Castle of Heaven: A Portrait of Johann Sebastian Bach, was published in October 2013 by Allen Lane, leading to the Prix des Muses award (Singer-Polignac). Among numerous awards in recognition of his work, Sir John Eliot Gardiner holds several honorary doctorates. He was awarded a knighthood for his services to music in the 1998 Queen’s Birthday Honors List.

For more information on his 2019–2020 Perspectives, please visit: carnegiehall.org/gardiner.

Since its inception, the ORR has won plaudits for its interpretations of major early Romantic composers, from Berlioz to Beethoven, as well as later works by composers ranging from Verdi to Debussy. Major projects have included Beethoven symphony cycles, “Schumann Revealed,” and ‘Brahms: Root and Memories,’ in which the ensemble recorded the complete symphonies of each respective composer. Additionally, the ORR has performed operas by Weber (Oberon and Le Freyschütz), Bizet (Carmen), Chabrier (L’Etoile), Verdi (Falstaff), and Debussy (Pelléas et Mélisande) in new productions in France, Italy, and London, and gave the first complete staged performances in Paris of Berlioz’s Les Troyens.

In 2015, the ORR returned to the music of Berlioz for a five-year exploration of the composer’s large-scale works, performing Roméo et Juliette, La damnation de Faust, Symphonie fantastique, Harold en Italie, and Lélio across Europe and the United Sates. The project featured five consecutive appearances at London’s BBC Proms, a highlight of which was performing excerpts of Les Troyens alongside star mezzo-soprano Joyce DiDonato. The celebrations culminated in 2019, marking the 150th anniversary of the composer’s death with the first contemporary performances of his opera Benvenuto Cellini on period instruments. The orchestra was joined by the Monteverdi Choir and a cast of international soloists for a series of critically acclaimed staged concerts of the opera at the BBC Proms, Berliner Festspiele, Festival Berlioz, and Château de Versailles.

The 2019-20 season marks 30 years since the founding of the ORR, as well as the 250th anniversary of the birth of Ludwig van Beethoven. In celebration of these twin milestones, the orchestra embarks on another momentous project, performing a cycle of all nine of the composer’s symphonies in residencies across Europe and the United States. The celebrations continue in September as the orchestra unites with the Monteverdi Choir to perform Beethoven’s Missa solemnis at some of Europe’s most prestigious music festivals.

About the Monteverdi Choir
Ever since its founding in the 1960s, the Monteverdi Choir has been a leading force in the world of choral music. Through a combination of consummate technique, historically informed performance practice, and a strong appreciation for visual impact, the Choir constantly strives to bring fresh perspectives, immediacy and drama to its performances across the world.

Amongst its many trailblazing tours was the Bach Cantata Pilgrimage in 2000, during which the Choir performed all 198 of Johann Sebastian Bach’s sacred cantatas in over 60 churches throughout Europe and North America. The entire project was recorded and released by the Monteverdi Choir & Orchestra’s record label, Soli Deo Gloria, with Gramophone hailing the venture as “one of the most ambitious musical projects of all time.” The Monteverdi Choir has over 150 recordings to its name and has won numerous prizes.

The Choir has taken part in a variety of projects across different repertoires, ranging from a tour of Bach’s St. Matthew Passion (performed from memory) with the English Baroque Soloists (EBS) to Berlioz’s La damnation de Faust and Verdi’s Requiem with the Orchestre Révolutionnaire et Romantique (ORR). It has also performed in several staged opera productions, including Orphée et Eurydice at the Royal Opera House (2015), Der Freischütz (2010), Carmen (2009) at the Opéra Comique in Paris, and Les Troyens at the Théâtre du Châtelet (2003). In 2017 the Choir took part in the RPS award-winning Monteverdi 450 project, which saw them perform all three of Monteverdi’s surviving operas with Gardiner and the EBS across Europe and the United States.

In 2019, the Choir showcased a new production of Handel’s Semele alongside Gardiner and the EBS, touring to celebrated halls across Europe, including Milan’s Teatro alla Scala. The highlights continued into the summer as the Choir joined Gardiner, the ORR and an international cast of soloists for critically acclaimed performances of Berlioz’s Benvenuto Cellini. The Choir rounded off the year with a series of debut performances in Russia and South America, performing sacred choral works by Monteverdi, Carissimi, Purcell and Scarlatti.

Alongside the Beethoven symphony cycle performed on period instruments by Sir John Eliot and the ORR this season will be a second symphony cycle with modern instruments by Yannick Nézet-Séguin and The Philadelphia Orchestra, allowing concertgoers to contrast different interpretive perspectives on these pillars of the orchestral repertoire (Mar. 13, 20 and 26, and Apr. 3, SA/PS).

BEETHOVEN’S SYMPHONIES AND THE EMPIRE OF THE MIND

Sir John Eliot Gardiner’s groundbreaking interpretations of Beethoven’s music have cast this magnificent body of work in a new light. Joined by distinguished Beethoven scholar William Kinderman and ORR principals Robin Michael and Anneke Scott for this illuminating discussion, Gardiner shares his insights about his approach to this immortal music.


Lead support for the Beethoven Celebration is provided by The Morris and Alma Schapiro Fund.