Voices of Hope: Artists in Times of Oppression
Citywide Carnegie Hall festival examines the role of artists during times of tyranny and injustice with 16 concerts at Carnegie Hall and events at 40+ NYC partner institutions 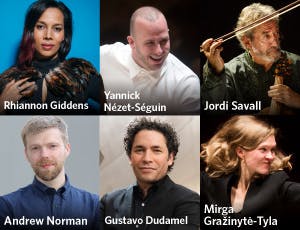 “As we consider the remarkable range of experiences in Carnegie Hall’s 2020-2021 season, we are reminded of the amazing power that music can have in our lives—its ability to not only elevate us, but to play a role in enabling us to look at issues with fresh eyes, illuminating new perspectives, and helping us to feel connected with one another,” said Clive Gillinson, Carnegie Hall’s Executive and Artistic Director. “Our Voices of Hope festival promises to be a special journey, inviting audiences to explore the inspiring role that artists have played in some of the darkest chapters of our shared history—capturing stories or a moment in time and expressing hope, courage, and resistance in the face of the unimaginable. Our four curated series are in the hands of some of the most creative artists working today, each challenging us to explore through music, with programming that brings their unique viewpoints to the forefront. With so many concerts spanning musical genres performed by the world’s finest artists and ensembles, it promises to be a season rich with new discoveries.”

From March-May 2021, Carnegie Hall presents Voices of Hope: Artists in Times of Oppression, a citywide festival spotlighting the resilience of artists throughout history and the life-affirming power of music and the arts during times of oppression and tyranny. With 16 concerts at Carnegie Hall crossing musical genres and thought-provoking events at more than 40 prestigious partner organizations, the festival kicks off at Carnegie Hall on March 12 with Rhiannon Giddens and Friends: Songs of Our Native Daughters, where Giddens and her group of black female banjo players, Our Native Daughters, draw from historical sources to reimagine our collective past, shining a new light on African American women’s stories of struggle, resistance, and hope. The festival extends across New York City over three months with exhibitions, performances, talks, film screenings, and more, further exploring how the arts have been used as a tool for activism, resistance, solidarity, and hope.

Renowned singer-songwriter, multi-instrumentalist, and speaker Rhiannon Giddens curates a five-concert Perspectives series showcasing her remarkable talents, shedding a light on the shared history of a variety of musical traditions around the world. In addition to Songs of Our Native Daughters, she is joined by frequent collaborator pianist Francesco Turrisi for an evening of back-to-back recitals, as well as a program showcasing songs from their critically praised album there is no Other. Her residency culminates with Mr. Bones Need to Leave Me Alone, an evening that looks at the complex history of minstrelsy in American music and how it relates to music of today.

Viola da gamba virtuoso and conductor Jordi Savall presents a four-concert Perspectives focused both on early-music repertoire and wide-ranging programs of his own creation. His series includes two concerts focused on works by Monteverdi, where he shares the stage with his ensemble, Le Concert des Nations and singers from La Capella Reial de Catalunya. In the spring, he presents Bal-Kan: Honey and Blood, Music in the Ottoman Empire as part of the Voices of Hope festival, working with his Hespèrion XXI ensemble, joined by guest musicians from Hungary, Bosnia, Bulgaria, Serbia, Turkey, Romania, and beyond. His final performance reveals the expanse of Mediterranean musical traditions from Europe to the Islamic world.

Conductor Yannick Nézet-Séguin returns for the second half of his two-year Perspectives, curating seven concerts including performances with The Philadelphia Orchestra and The MET Orchestra, as well the Chamber Orchestra of Europe and Westminster Choir. Maestro Nézet-Séguin’s Perspectives features collaborations with some of the finest soloists today, including violinist Lisa Batiashvili and pianist Mitsuko Uchida; some of the world’s greatest singers including frequent collaborator Joyce DiDonato; and a wide range of repertoire ranging from Beethoven to recent works by Mason Bates and Missy Mazzoli.

Carnegie Hall has appointed composer Andrew Norman to hold the Richard and Barbara Debs Composer’s Chair for the 2020–2021 season. Mr. Norman’s residency includes nine concerts throughout the season with his music being performed by violinist Leila Josefowicz and the Los Angeles Philharmonic led by Gustavo Dudamel, Berliner Philharmoniker led by Kirill Petrenko, the Louisville Orchestra led by Teddy Abrams, pianist Emanuel Ax, Ensemble Connect, yMusic, and the American Composers Orchestra. Committed to the development of new work by emerging composers of all backgrounds, Mr. Norman curates a program for the LA Phil New Music Group, led by John Adams, and participates in the Weill Music Institute’s All Together: A Global Ode to Joy project as part of his residency.

Also featured in the season will be a fall return by the Sphinx Virtuosi; concerts by Orchestra of St. Luke’s under the baton of Principal Conductor Bernard Labadie; and the Hall’s traditional December concerts with New York String Orchestra with Jamie Laredo.

Also next season, among a wide variety of vocal and instrumental recitals and chamber concerts: the Carnegie Hall recital debut of soprano Lise Davidsen in Zankel Hall and the Stern Auditorium/Perelman Stage recital debut of soprano Christine Goerke; performances by Ensemble Connect and Decoda; piano trios performed by pianist Jean-Yves Thibaudet, violinist Lisa Batiashvili, and cellist Gautier Capuçon as well as by pianist Evgeny Kissin, violinist Joshua Bell, and cellist Steven Isserlis; and the launch of a multi-season “Doppelgänger” project by the Danish String Quartet performing Schubert alongside new works written in response to these works, commissioned by Carnegie Hall.

A special highlight of the season: superstar violinist Anne-Sophie Mutter and legendary composer-conductor John Williams will present Across the Stars: The Music of John Williams, a gala evening of Williams’s beloved film music performed by The Philadelphia Orchestra in a special one-night-only January performance benefitting Carnegie Hall.

In addition, for the first time in many years, concertgoers will be offered a new setting in which to experience music at Carnegie Hall when Zankel Hall—the Hall’s flexible underground concert venue—will be reconfigured over the course of seven days in January 2021 to an in-the-round format for a select number of Zankel Hall Center Stage concerts. Performances spanning genres, all specifically programmed with the center stage format in mind, will provide a unique vantage point and intimate space in which performers and audience members can interact. Concerts presented in this format include performances by yMusic; Third Coast Percussion with choreographers and movement artists Jon Boogz & Lil Buck; jazz vocalist Jazzmeia Horn; pianist Gabriela Montero; new music with Caroline Shaw and Friends; Rhiannon Giddens with pianist Francesco Turrisi performing songs from their album, there is no Other; as well as a special participatory Violin Weekend event with PUBLIQuartet and 200 local violinists coming together for a “play-in,” presented by Carnegie Hall’s Weill Music Institute.

Looking beyond the walls of the building and into the community, Carnegie Hall Citywide, a free concert series of roughly thirty performances offered at venues in all five boroughs of New York City continues all season long. Partnering with local community organizations, the performances feature leading artists and rising stars, representing all musical genres.

Carnegie Hall and WQXR 105.9 FM in New York will partner for a tenth consecutive year to produce Carnegie Hall Live, an engaging live radio broadcast and digital series featuring performances from throughout Carnegie Hall’s season. This year’s series launches on October 7 with Carnegie Hall’s Opening Night Gala performance featuring the Los Angeles Philharmonic under the baton of Music and Artistic Director Gustavo Dudamel. The full 2020–2021 broadcast schedule will be announced at a later date.

Playlists curated by Carnegie Hall inspired by artists and programming themes in the 2020–2021 season are also exclusively available to stream on Apple Music at apple.co/carnegiehall. They join ongoing dynamic playlists created by the Hall exploring “The Symphony Orchestra,” “The Piano,” and “Carnegie Hall Presents,” highlighting artists and repertoire featured in upcoming concerts with musical selections handpicked to complement artistic initiatives in the coming year, inviting music lovers to explore.

United Airlines® is the Official Airline of Carnegie Hall.

Mastercard® is the Official Card of Carnegie Hall.