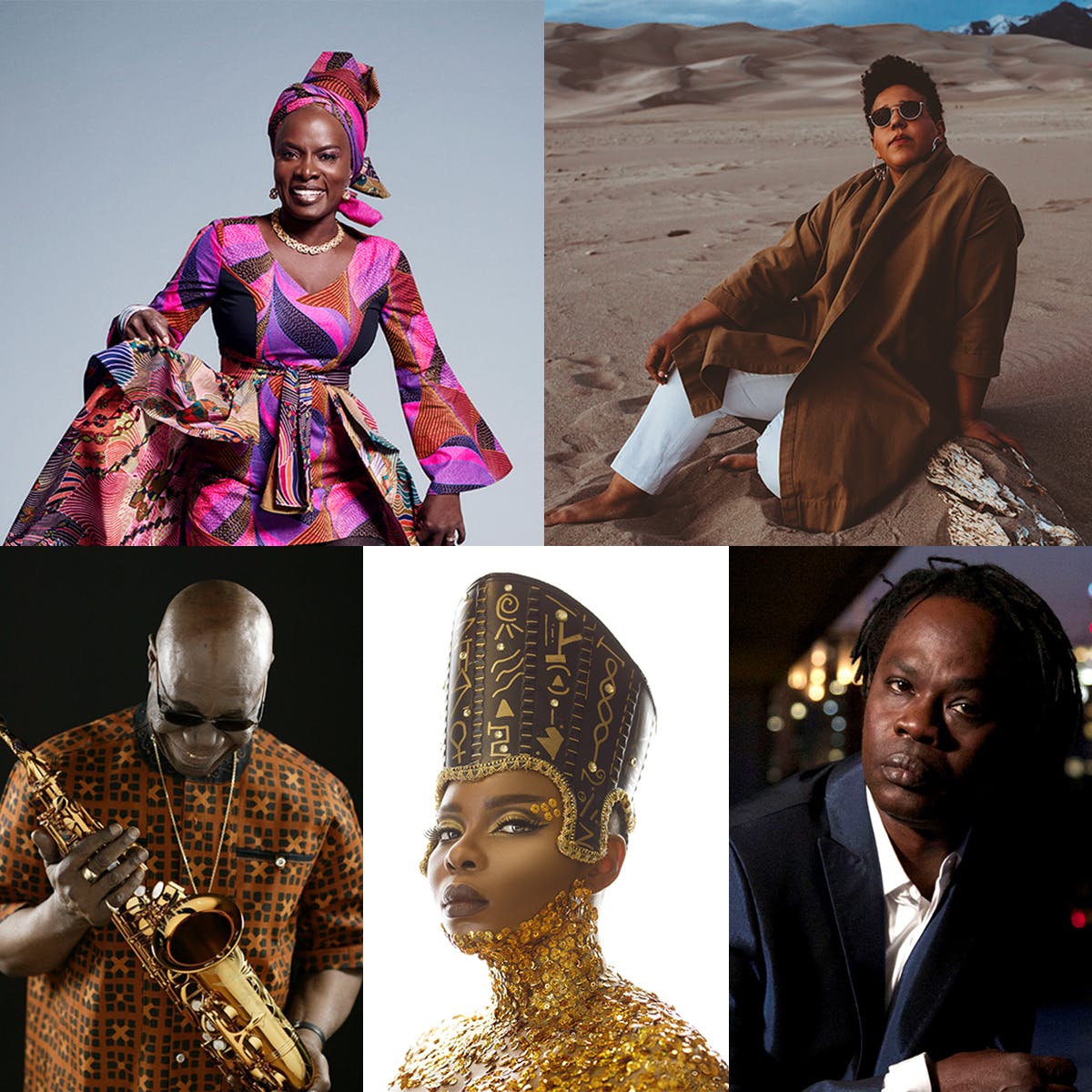 (New York, NY, February 4, 2020)— On the heels of winning her fourth Grammy Award, Angélique Kidjo concludes her Perspectives series with Daughter of Independence on Saturday, March 14 at 8:00 p.m. in Stern Auditorium/ Perelman Stage. The concert marks both her 60th birthday and the anniversary of independence of her native Benin in addition to sixteen other West African nations. For this momentous occasion, Kidjo is joined by Grammy Award-winning vocalist Brittany Howard (of Alabama Shakes), legendary Cameroonian singer Manu Dibango, Senegalese singer and guitarist Baaba Maal, and Nigerian Afropop singer-songwriter Yemi Alade, to celebrate her remarkable musical career.

“When I look back at 60 years of independence for my country, I feel that my life and career have been shaped in many ways by the postcolonial history of West Africa: I consider myself a true daughter of African independence,” says Kidjo. “I hope the audience leaves the March performance understanding that it doesn’t matter where you come from; it doesn’t matter your skin color or which language you speak. Music reduces it all to the fundamental element that speaks to us all as human beings.”

About the Artists
Angélique Kidjo’s performances over the past two decades have thrilled audiences and left an indelible mark on the history of Carnegie Hall. In 2014, she closed Carnegie Hall’s UBUNTU festival with a tribute to singer Miriam Makeba that inspired concertgoers—including Archbishop Emeritus Desmond Tutu—to rise to their feet and sing along. In 2017, Talking Heads lead singer David Byrne joined Kidjo on stage for her cover of the band’s hit “Once in a Lifetime” before she led a conga line that made its way throughout Stern Auditorium/Perelman Stage. The upcoming series is sure to give audiences more unforgettable moments with performances featuring outstanding guest artists joining together to celebrate one of music’s most vibrant voices.

Kidjo is one of the greatest artists in international music today. A creative force with 14 albums to her name, Time magazine has called her "Africa's premier diva." The BBC has included her in its list of the continents’ 50 most iconic figures, and, in 2011, The Guardian listed her as one of their Top 100 Most Inspiring Women in the World. Forbes magazine has ranked Angélique as the first woman in their list of the Most Powerful Celebrities in Africa. She is the recipient of the prestigious 2015 Crystal Award given by the World Economic Forum in Davos, Switzerland, and the 2016 Amnesty International Ambassador of Conscience Award.

As a performer, Kidjo’s striking voice, stage presence and fluency in multiple cultures and languages have won respect from her peers and expanded her following across national borders. She regularly tours globally performing the high-energy music for which she is known with her four-piece band. For her most recent project—an interpretation of the Talking Heads’ classic 1980 album, Remain in Light—Kidjo recorded her version of the album with superstar producer Jeff Bhasker (Kanye West, Jay Z, Drake, Beyoncé, Bruno Mars, and Taylor Swift), creating thrilling new arrangements of the iconic songs, later bringing the musical extravaganza to concert halls and festivals across the globe including Carnegie Hall and its US festival debut at Bonnaroo. Among her other projects, her collaboration with composer Philip Glass, titled IFÉ: Three Yorùbá Songs, made its US debut to a sold-out concert with the San Francisco Symphony in June 2015.

Along with her performance schedule, Kidjo also travels the world advocating on behalf of children in her capacity as a UNICEF and Oxfam Goodwill Ambassador. She created her own charitable foundation, Batonga, dedicated to support the education of young girls in Africa.

Brittany Howard blasted onto the music scene as the lead vocalist and guitarist for the American blues rock band Alabama Shakes in 2010. The group lived up to their namesake by shaking up the music landscape with their indelible roots-rock sound. The band earned multiple Grammy Awards for their second album, Sound & Color, including Best Alternative Music Album in 2016.

Fans and critics alike have praised Howard’s first solo album, Jaime, which dropped in September 2019. Dedicated to Howard’s sister who passed away as a teen, the album topped Billboard’s U.S. Americana/Folk Albums chart and hit No. 2 on the Top Rock Albums and Top Independent Albums charts. The album’s lead single, “History Repeats,” even garnered Grammy Award nominations for Best Rock Song and Best Rock Performance. And rock she does, to a colorful, energetic, nearly boundless extent. She performed songs from the triumphant solo collection in August, September, and October of last year. Some dates were ahead of the album’s release and unsurprisingly, her solo shows received rave reviews with The Guardian describing Howard as “a funk-rooted tour de force” for her Amsterdam show. She’ll be carrying that vibrant energy forward to venues across America next year and rock lovers won’t want to miss an opportunity to witness Brittany Howard’s musical magic firsthand.

Cameroonian saxophonist and vibraphone player Manu Dibango began his musical journey as a piano student. Not having a keyboard at home to rehearse his music lessons, he spent time using his friend's saxophone which has today become his longest companion. Dibango developed a musical style fusing jazz and traditional Cameroonian music.

After the release of the funk-flavored Surtension in 1982, Dibango worked with an international lineup of jazz luminaries, such as American pianist Herbie Hancock in Electric Africa and South African trumpeter Hugh Masekela in Afrijazzy.

Dibango’s jazz blends of the 1990s and the 2000s continued to draw from a diverse pool of popular music. The release of Wakafrika brought together African vocal virtuosos Youssou N’Dour (Senegal), King Sunny Adé (Nigeria), Salif Keita (Mali), Angélique Kidjo (Benin), Ray Lema (Congo), and the group Ladysmith Black Mambazo (South Africa), as well as other prominent musicians. In the early part of the 21st century, Dibango tended to be retrospective, with albums including Africadelic (2003), which was a compilation of his greatest hits released to mark the 30-year anniversary of the “Soul Makossa” explosion. In 2007 Dibango issued Manu Dibango joue Sidney Bechet, an all-jazz tribute to American saxophonist Sidney Bechet, whose music had been a formative force in Dibango’s musical development.

In addition to his stage and studio activities, Dibango composed music for film and television. In 1990 he published his autobiography, Three Kilos of Coffee (originally in French), with Danielle Rouard. Harboring a deep and ongoing concern for the well-being of humanity, he often used his music and his influence to garner support for various humanitarian causes. In recognition of his contributions to the development of music as well as his cultivation of cross-cultural dialogue—particularly between Europe, Africa, and North America—through the arts, he was named the UNESCO Peace Artist of the Year in 2004.

Born in 1953 in the Fouta town of Podor, Baaba Maal studied music in Dakar, the capital of Senegal, and Paris, before embarking on a two-year musical pilgrimage around West Africa with his longtime friend Mansour Seck. He then recorded his first albums with Seck, including the desert blues classic Djam Leelii. He has often collaborated with other major artists, and in 2001 he worked with Hans Zimmer on the soundtrack to Ridley Scott’s hit film Black Hawk Down. In 2013, Maal performed for President Barack Obama on his historic state visit to Senegal.

Maal’s most recent album The Traveller features members of the world-renowned group Mumford and Sons. For the album, which represented both a new direction musically and a powerful summary of his life’s work, he reunited with his longtime producer John Leckie (Radiohead, Muse, Stone Roses) on two tracks “Peace” and “War”. In 2016, Baaba collaborated again with Mumford and Sons on a four-track EP, Johannesburg, recorded in South Africa. Two singles, “There Will Be Time” and “Wona,” both had considerable chart success. Maal also recorded the song Wakanda on the Grammy and Academy Awarding winning soundtrack Black Panther.

Maal started his own music festival, Blues du Fleuve (Blues of the River), in Fouta, in December 2005 to draw attention to the culture of this region. “Even the people who live in Dakar sometimes don’t know the country very well,” says Maal. “It’s to open a window for people to discover where I come from and see all the opportunities in this part of Senegal.”

The latest edition of the Blues du Fleuve festival took place in Maal’s hometown of Podor in December 2017; all Mumford and Sons band members played the event. It is the subject of Academy Award winning director Kevin McDonald’s documentary film Return to Podor, to be released later this year.

Maal’s latest and most ambitious project is the establishment of the organization NAAN-K. A Pulaar word, ‘NANN-K’ tellingly translates as the phrase “Listen to this”, and in its original language spells out the initial letters of the five elements with which it will be concerned: Agriculture; Fishing; Livestock Farming; Culture; and Technology Access. The overall aim of NANN-K as an organization is to support people from Senegal, and throughout Africa, in developing careers in agriculture.

Maal is very clear about his mission: “I intend to be the voice for the people in Africa’s rural communities. I want to offer them a chance to be part of the future development of Africa.”

Yemi Eberechi Alade (popularly known as “Yemi Alade”) is a Nigerian singer/songwriter, composer, actress and entertainer. With four albums, one EP, and numerous hit singles including Johnny, Ferrari, Na Gode and Bum Bum under her belt, Yemi Alade is one of the biggest Afro-pop female artists on the African continent.

Alade is a 2015 and 2016 BET Awards nominee for Best International Act Africa, a two-time MOBO Awards nominee for Best International Act 2014 and 2015, and winner of Best Female at the MTV Africa Music Awards (MAMAs) in both 2015 and 2016. She has received several awards and nominations, including MTV African Music, African Music Video awards, City people Entertainment, MOBO, YEM and Eloy awards.

Throughout her career, Yemi Alade has accumulated over 200 million streams across all music platforms and over 390 million views on YouTube, making her one of the most-viewed African artists of all time.

Major support for the Angélique Kidjo Perspectives series has been provided by the Howard Gilman Foundation.