Carnegie Hall Presents The Eyes of the World: From D-Day to VE Day Saturday, June 6 and Tuesday, June 9 in Zankel Hall 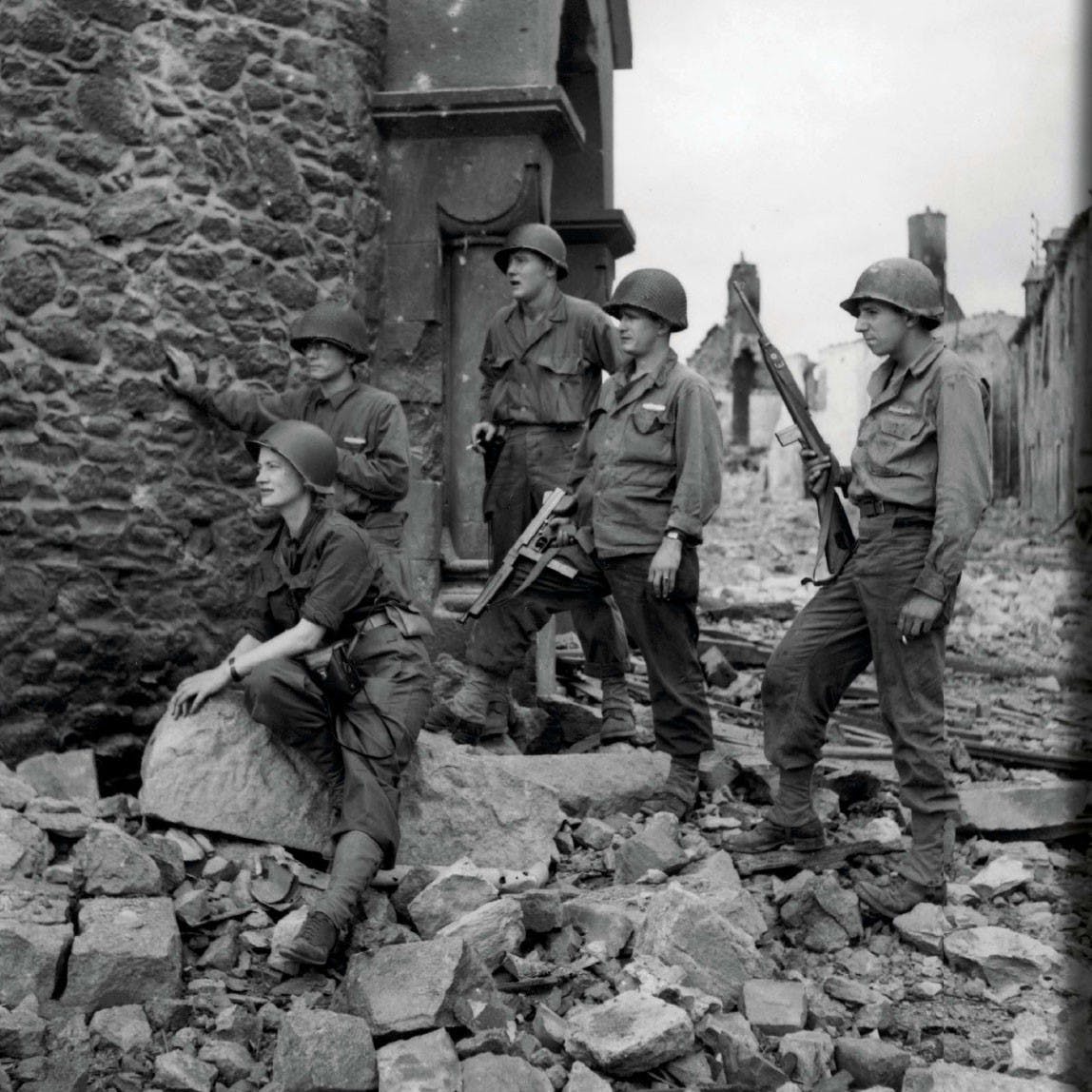 NEW YORK, NY—Historian and narrator John Monsky brings his groundbreaking American History Unbound series back to Zankel Hall on Saturday, June 6 and Tuesday, June 9 with The Eyes of the World: From D-Day to VE Day—an exciting multimedia production that tells the powerful story of the American landing on the Normandy beaches and subsequent 11 months of battle that finally secured victory in Europe.

On June 5, 1944, on the eve of D-Day, Major General Dwight D. Eisenhower told American forces, “The eyes of the world are upon you. The hopes and prayers of liberty-loving people everywhere march with you.” While D-Day marked a turning point and pathway to victory, the landings and eleven months of battle that followed would be among the most brutal for the American troops and Allied forces.

This immersive concert experience, presented with the New-York Historical Society in the 75th anniversary year of VE Day, recounts this period through striking photography from the archives of American photojournalist Lee Miller, who, reporting for Vogue magazine, was among the 127 accredited female journalists covering the war, as well as letters home from a young American intelligence officer who landed at Normandy and fought with the army through VE day. Along the way, they connected with legendary American writer Ernest Hemingway and photojournalist Robert Capa. The paths of these four remarkable figures intersect and intertwine as they served as the “eyes for the world” from D-Day to eventual victory.

The program features the Orchestra of St. Luke’s, conducted by music supervisor Ian Weinberger (Hamilton), joined by leading Broadway vocalists including Nick Cordero (Waitress, A Bronx Tale), Kate Rockwell (Mean Girls), Tony LePage (Come From Away), and Bryonha Parham (After Midnight) performing evocative music of the era—from La Vie en Rose and Woody Guthrie’s What Are We Waiting On to signature songs of legendary bandleader Glenn Miller who volunteered for the Army at the height of his career—and selections from the film soundtracks of Saving Private Ryan and Band of Brothers. Tickets for the June 6 and 9 performances will go on sale to the general public on Tuesday, February 25.

Monsky has been creating and performing his American History Unbound productions for over a decade and was recently honored by the New-York Historical Society. After two previous sold-out productions—The Vietnam War: At Home and Abroad (2018) and We Chose To Go To The Moon (2019)—The Eyes of the World is the third installment of American History Unbound to be presented at Carnegie Hall.

“John has a passion for combining storytelling, music, visuals, and film in unique and creative ways that bring history to life and that connect emotionally with his audiences,” said Clive Gillinson, Executive and Artistic Director of Carnegie Hall. “We look forward to this next edition which will take us through some of the most important moments of World War II, traveling on a journey that is sure to be powerful as well as illuminating.”

Like Monsky’s previous productions, The Eyes of the World includes tangible historic objects woven into the storytelling narrative, some of which have been in storage and not seen by the public for more than 75 years. His presentation includes the flag famously placed by Rudder’s Rangers on the rocks of Pointe du Hoc to mark the command post; a rarely-seen divisional color of the US 29th Infantry Division, which suffered tremendous losses on the beaches of Normandy; the flag from landing craft LCI 94, which picked up photojournalist Robert Capa from Omaha Beach on D-Day; community “service banners” hung in schools and churches across America, with blue stars indicating the number of their “boys” in service, plus more.

“I did not start out looking for the figures we follow in this production—Hemingway, Capa, Miller, and a young intelligence officer who landed on D-Day,” said John Monsky. “They revealed themselves as we researched a single flag flown on a Higgins boat and the boys it carried to the beaches. Every twist and turn surprised us as the story unfolded, with its conclusion making the hair on the back of my neck stand on end, as Lee Miller and others come together in some of the War’s most dark and haunting places.”

“We are grateful for the contributions of historian and author Alex Kershaw, the staff of the American Battle Monuments Commission and The National World War II Museum, as well as Katie Couric and John Molner for their encouragement and passion to tell the stories of American history. It’s also been an extraordinary privilege to work with Lee Miller's family—her son Antony Penrose and granddaughter Ami Bouhassane—to expose her work to the wider audience it deserves.”

About John Monsky and the American History Unbound Series
John Monsky is an historian, writer, lecturer and lawyer. American History Unbound, his innovative series of multimedia productions, was developed at the New-York Historical Society. The Vietnam War: At Home and Abroad, shaped around 282 zippo lighters engraved with personal messages and carried by troops during the War, was presented at Carnegie Hall in 2018, as part of The '60s: The Years That Changed America, a citywide festival inspired by historian Robert Caro. July 2019's We Chose to Go to the Moon, celebrating the 50th anniversary of Apollo 11, featured special performances by Neil Armstrong’s son Mark, and granddaughter, Kali. The orchestra was conducted by To Kill a Mockingbird’s Kimberly Grigsby.

The American History Unbound series, exploring watershed moments in American history, combines live music performed by celebrated Broadway actors and a full orchestra, incorporating film, photography, historic flags and material culture from Monsky’s personal collection. Narrated by Monsky with a script punctuated with his own memories and observations, each production includes powerful examinations of singular and pivotal events—from the Revolutionary War and Civil War to D-Day—turning points in history that changed America.

Decades ago, Monsky’s mother bought her 12-year-old son his first “flag,” a red kerchief (an artifact from Theodore Roosevelt’s unsuccessful 1912 presidential bid), to appease his boredom while on a routine shopping outing. Today, his collection of flags and textiles -- tangible artifacts that connect us to our history -- has become one of the finest in the country. As his collection grew, so did annual Flag Day presentations held in Monsky’s apartment. As the events grew larger in scope—adding bands and Broadway singers to accent his talks—they eventually required portal-widening-living room-construction to accommodate friends and family, all riveted by Monsky’s storytelling. Sought-after invitations to these informal gatherings attracted the attention of The New Yorker in 2012, when Monsky took a second look at the War of 1812, with a presentation that included the commissioning pennant from the great wooden frigate, the USS Constitution. Louise Mirrer, the President and CEO of the New-York Historical Society, where Monsky is a trustee, recalled, “I attended the Flag Day celebrations and was absolutely dazzled. One of those years after viewing…a really exceptional explication of history, I said to John, ‘you know, you should do that in our auditorium.’” She has since called his D-Day production “the most moving event ever presented on the Society’s stage.”

Monsky graduated from Yale College as a history major, where he was awarded the White Prize in History and the Deforest Oratory Prize. After attending Harvard Law School and working as a law clerk, he served as an attorney for the US Senate Congressional Committee that was investigating the Iran Contra Affair. When not collecting historic flags or researching his stories, Monsky’s day job is at Oak Hill Capital, an investment firm, where he serves as partner and general counsel. He and his wife live in New York City with their four children and two dogs, Flag and Flyer.

Presented by Carnegie Hall in association with the New-York Historical Society.

Tickets, priced at $71 and $85 go on sale to the general public on Tuesday, February 25 at 11:00 a.m. and are available at the Carnegie Hall Box Office, 154 West 57th Street, or can be charged to major credit cards by calling CarnegieCharge at 212-247-7800 or by visiting the Carnegie Hall website, carnegiehall.org.