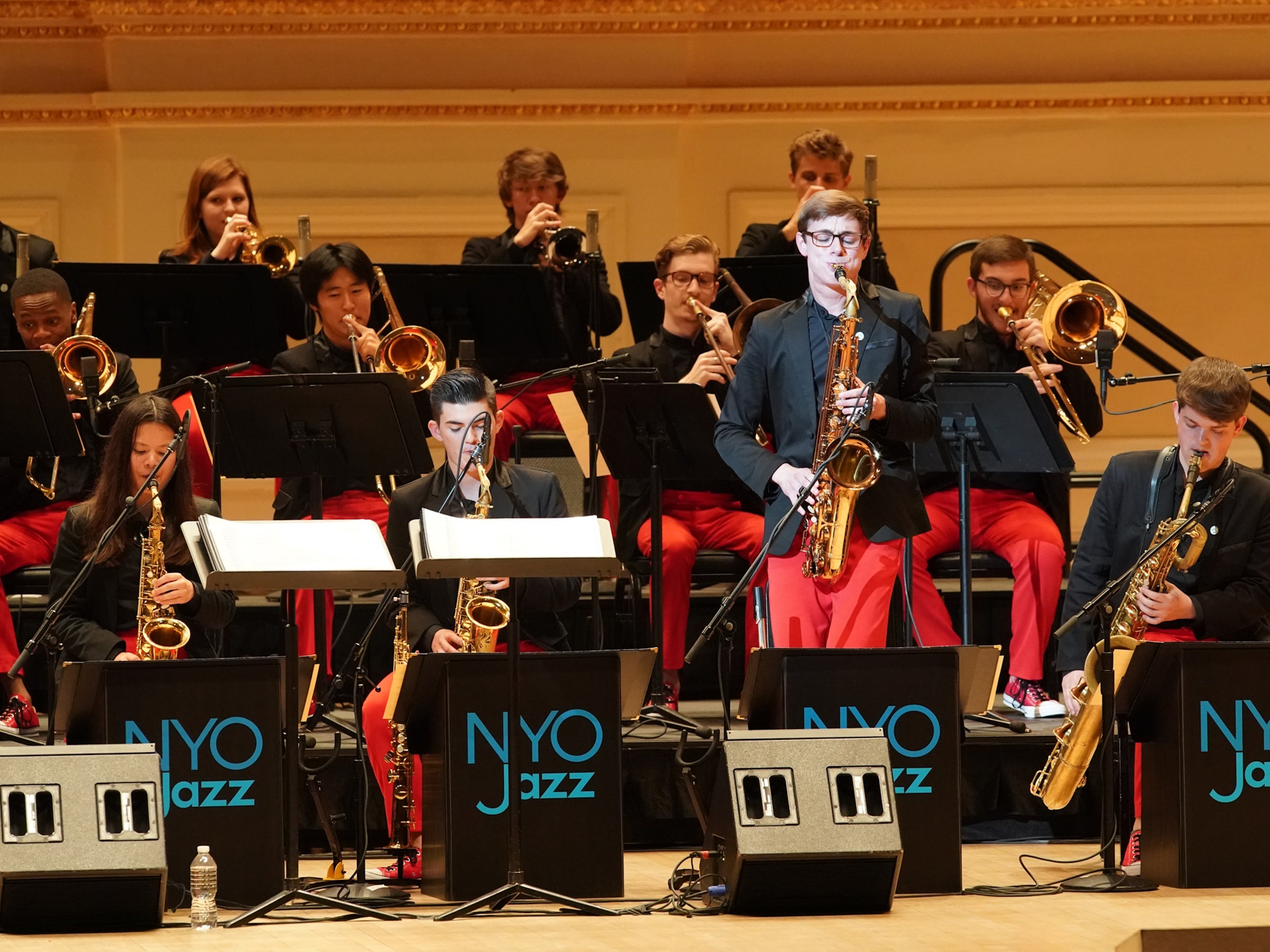 (February 20, 2020; NEW YORK, NY)—This June and July, Carnegie Hall’s critically-acclaimed national youth jazz orchestra—NYO Jazz—returns for its third season of extraordinary music-making, highlighted by its first-ever tour to South Africa from June 24-July 7, 2020. This remarkable ensemble, created by Carnegie Hall’s Weill Music Institute in 2018, annually brings together some of the most outstanding teen jazz musicians from across the United States to train, perform, and tour with some of the world’s greatest artists while also serving as music ambassadors for their country.

NYO Jazz’s historic visit to South Africa—to include debut performances in Cape Town, Johannesburg, Makhanda, and Bloemfontein—marks the first time that one of Carnegie Hall’s three acclaimed national youth ensembles will perform on the African continent. It follows successful international tours by NYO Jazz to some of Europe’s most prestigious concert halls and music festivals in 2018, and the ensemble’s debut tour to Asia in 2019.

Celebrated trumpeter Sean Jones returns to lead NYO Jazz in 2020. He is joined by iconic jazz vocalist Dianne Reeves as special guest. These NYO Jazz concerts will offer a rare chance to hear the five-time Grammy Award winning vocalist performing with a big band, singing jazz standards in arrangements that have been especially made for her. The ensemble’s diverse repertoire will also feature a new composition by John Beasley, commissioned by Carnegie Hall for this tour, and other contemporary pieces that explore jazz’s influence on hip-hop, R&B, and pop music alongside big band standards.

“We are thrilled to have NYO Jazz make its debut in South Africa this summer—the first visit to Africa by any of our national youth ensembles” said Clive Gillinson, Executive and Artistic Director of Carnegie Hall. “Given South Africa’s extraordinarily rich music traditions, which include a deep passion for jazz, we know this tour will be a tremendous opportunity for musical and cultural discovery for these amazing young players. We are proud to showcase their incredible depth of talent and the high level of musicianship found across the United States as we find ways to connect the members of NYO Jazz with young musicians and music lovers across the country.”

NYO Jazz’s 2020 tour will offer America’s finest young musicians the opportunity to experience the richness of South Africa’s culture and history while sharing their remarkable artistry with audiences throughout the country. Complementing their performances, the players’ schedule will also include exciting opportunities for cultural exchange and peer-to-peer activities with local young people, an element that has become a hallmark of international tours by all three of Carnegie Hall’s national youth ensembles.

NYO Jazz’s 2020 roster will be announced by Carnegie Hall in early April 2020. In preparation for this historic tour, the musicians will arrive in New York in mid-June to begin an intensive 10-day training residency (June 14-23). They will work with world-class jazz masters on the campus of Purchase College, State University of New York, located just north of New York City. Immediately following the residency, NYO Jazz will embark on tour to South Africa and then return home for its annual concert at Carnegie Hall.

About NYO Jazz
Each summer, NYO Jazz shines a spotlight on the depth of talent found among teen jazz players across the United States. The program offers talented young musicians, ages 16-19, the opportunity to perform as cultural ambassadors for their country, sharing a uniquely American musical genre with people around the world through an international tour. The members of NYO Jazz have been recognized by Carnegie Hall as being among the finest jazz musicians in the country, following a rigorous and highly competitive audition process. In 2018, NYO Jazz’s first-ever international tour included performances with vocalist Dianne Reeves at prestigious concert halls and music festivals in London, Amsterdam, Edinburgh, and Berlin. Last summer, NYO Jazz made its debut tour to Asia, joined by vocalist Kurt Elling, including performances in Taichung, Beijing, Shanghai, Zhuhai, and Hong Kong.

NYO Jazz builds on the success of the acclaimed National Youth Orchestra of the United States of America (NYO-USA) and its sister ensemble for younger musicians NYO2—programs created by Carnegie Hall in 2013 and 2016, respectively—to bring together the finest young classical musicians from across the country each summer for training, performances and international touring. Each of these prestigious national programs—free to all participants—is dedicated to the proposition that talented young musicians thrive when they have the opportunity to expand their musical, social, and cultural horizons and share their artistry with audiences around the globe. Since 2013, the national youth ensembles have performed in 15 countries on four continents, including tours to China, South Korea, Mexico, Ecuador, Colombia, Russia, and across Europe.

About Sean Jones
Trumpet player Sean Jones—one of jazz’s most outstanding performer-composer-educators—serves as NYO Jazz’s artistic director, leading the ensemble’s faculty as well as directing the orchestra’s performances. A highly respected and in-demand musician, Mr. Jones has recorded and performed with major artists including Wynton Marsalis and the Jazz at Lincoln Center Orchestra (JLCO), Illinois Jacquet, Jimmy Heath, Frank Foster, Nancy Wilson, Dianne Reeves, Gerald Wilson, and Marcus Miller. His relationship with Mr. Miller led Mr. Jones to be selected for the A Tribute to Miles tour in 2011 with Herbie Hancock and Wayne Shorter. He has also performed with the Cleveland, Pittsburgh, and Youngstown symphony orchestras, as well as Soulful Symphony in Baltimore and a chamber group at the Salt Bay Chamberfest.

Mr. Jones also performs with his own ensembles, and has a longstanding relationship with Mack Avenue Records, with which he has released eight albums. His most recent is the 2017 release Sean Jones: Live from Jazz at the Bistro. Heavily involved in education, Mr. Jones is an internationally recognized educator. He is president of the Jazz Education Network and holds the Richard and Elizabeth Case Chair in Jazz Studies at the Peabody Conservatory of the Johns Hopkins University in Baltimore. Previously, he served as chair of the brass department at Berklee College of Music in Boston.

About Dianne Reeves
Five-time Grammy Award winner Dianne Reeves is one of the world’s preeminent jazz vocalists. With her breathtaking virtuosity, improvisational prowess, and unique jazz and R&B stylings, she has received the Grammy Award for Best Jazz Vocal Album for three consecutive recordings—a Grammy first in any vocal category. Featured in George Clooney’s Academy Award–nominated Good Night, and Good Luck, she also won a Grammy Award for the film’s soundtrack.

Ms. Reeves has recorded and performed with Wynton Marsalis and the Jazz at Lincoln Center Orchestra. She has also recorded with the Chicago Symphony Orchestra conducted by Daniel Barenboim, and was a featured soloist with Sir Simon Rattle and the Berliner Philharmoniker. She was the Los Angeles Philharmonic’s first Creative Chair for Jazz, and the first singer ever to perform at the famed Walt Disney Concert Hall.

In recent years, Ms. Reeves has toured the world as an ensemble leader as well as with projects that include NYO Jazz’s inaugural international tour to Europe and Sing the Truth!, a musical celebration of Nina Simone with Angelique Kidjo and Lizz Wright. She has performed at the White House on multiple occasions, including the Governors Ball and a state dinner given by President Barack Obama. Ms. Reeves’s performance with NYO Jazz will be her second trip to South Africa this year: On April 30 she will be featured with Herbie Hancock during International Jazz Day festivities in Cape Town.

Ms. Reeves’s most recent Grammy Award-winning release, Beautiful Life, was produced by Terri Lyne Carrington and features Gregory Porter, Robert Glasper, Lalah Hathaway, and Esperanza Spalding. Ms. Reeves is the recipient of honorary doctorates from the Berklee College of Music and The Juilliard School. In 2018, the National Endowment for the Arts designated her a Jazz Master—the highest honor the United States bestows on jazz artists.

What the Press Have Said About NYO Jazz
“The NYO Jazz ensemble, stocked with ambitious young players under the leadership of the trumpeter Sean Jones, tackles an intriguing program.” —The New Yorker

“Young jazz musicians from the US wow audiences across the country.” —China Daily

Major support has been provided by the Doris Duke Charitable Foundation and Clive and Anya Gillinson, Sarah Billinghurst Solomon and Howard Solomon and George T. Wein.