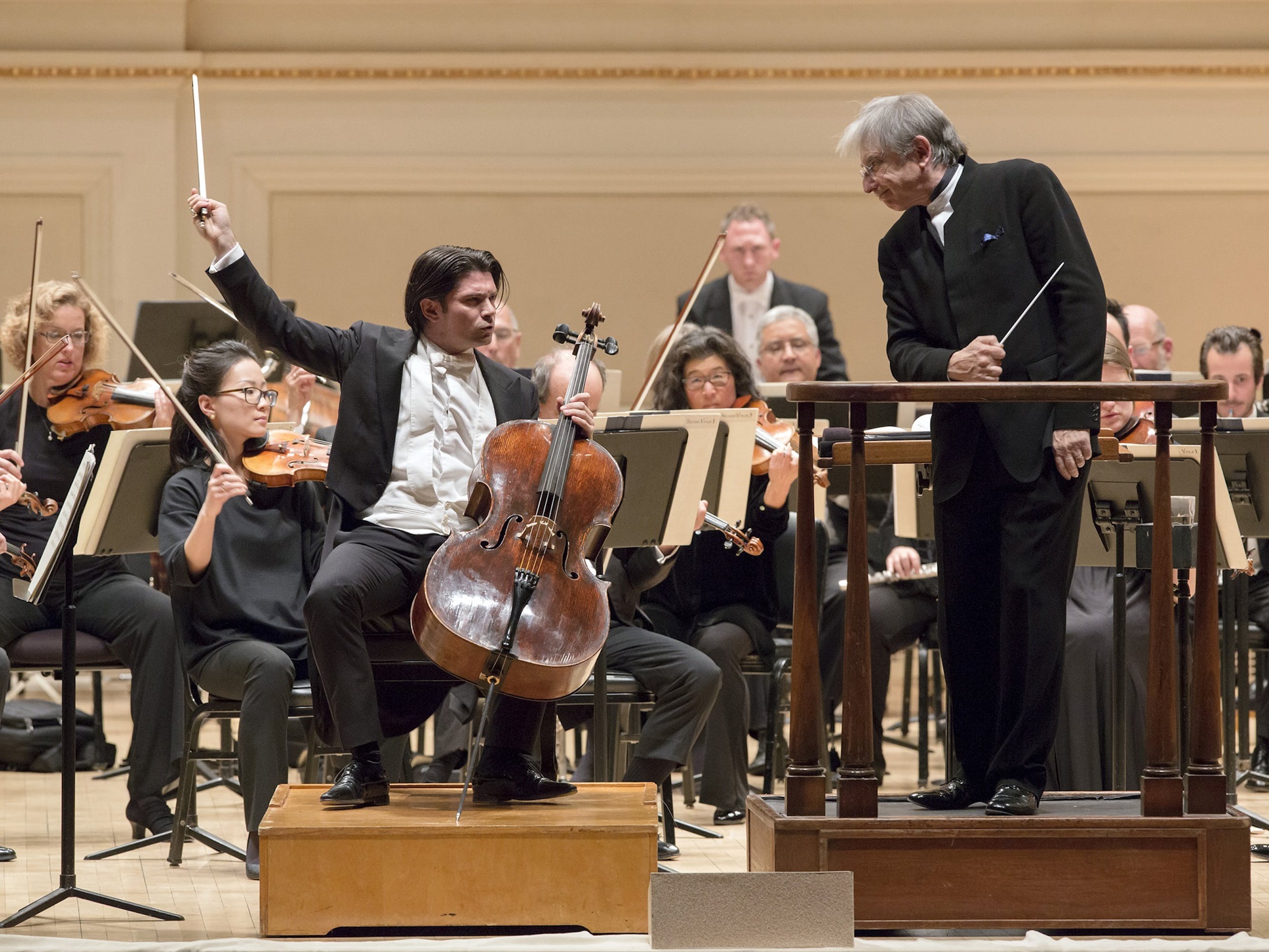 The orchestra’s program on Tuesday, March 17 at 8:00 p.m. includes the New York premiere of John Adams’s I Still Dance (co-commissioned by San Francisco Symphony and Carnegie Hall as part of the Hall’s 125 Commissions Project) as well as Saint-Saëns’s Cello Concerto No. 1 with Gautier Capuçon and Stravinsky’s The Firebird. Throughout his tenure, Mr. Tilson Thomas has championed the work of groundbreaking American composers including John Adams, whose relationship with the San Francisco Symphony (SFS) spans nearly four decades. Mr. Adams’s new work, which opens the program, is dedicated to Mr. Tilson Thomas and his husband, Joshua Robison.

The following evening–Wednesday, March 18 at 8:00 p.m.–features a performance of Mahler’s Symphony No. 6. Mr. Tilson Thomas and the San Francisco Symphony’s recording of this work was the first to be released on the orchestra’s in-house SFS Media label and was recognized with a 2002 Grammy Award for Best Orchestral Performance, the first of seven Grammys to be received for their complete recordings of Mahler's symphonies. This March 18 concert will be heard by listeners everywhere as part of the Carnegie Hall Live broadcast and digital series with a live radio broadcast on WQXR 105.9 FM in New York and online at wqxr.org and carnegiehall.org/wqxr.

Mr. Tilson Thomas made his Carnegie Hall debut leading the Boston Symphony Orchestra in 1969. He has since performed more than 100 times at the Hall, curating two extended Carnegie Hall Perspectives series. He last led the San Francisco Symphony at Carnegie Hall in October 2018, when the orchestra opened the Hall’s 2018-2019 season.

Mr. Tilson Thomas concludes his tenure as SFS Music Director in June 2020 with performances of Mahler’s Symphony No. 8 at Davies Symphony Hall in San Francisco. Upon concluding the final concert, he becomes the orchestra’s first Music Director Laureate.


About the Artists
Michael Tilson Thomas assumed his post as the San Francisco Symphony’s 11th Music Director in 1995, consolidating a relationship with the orchestra that began with his debut in 1974. Since then, he and the orchestra have formed a musical partnership hailed as one of the most inspiring and successful in the country. His tenure has been praised for outstanding musicianship, innovative programming, highlighting the works of American composers, and bringing new audiences to classical music. In addition, the orchestra has been recognized nationally and internationally as a leader in music education and pioneer in using digital technology to widen the reach of classical music.

A Los Angeles native, Mr. Tilson Thomas studied with John Crown and Ingolf Dahl at the University of Southern California, becoming Music Director of the Young Musicians Foundation Debut Orchestra at nineteen. He worked with Stravinsky, Boulez, Stockhausen, and Copland at the famed Monday Evening Concerts and was pianist and conductor for the Piatigorsky and Heifetz master classes. In 1969, Mr. Tilson Thomas was appointed Assistant Conductor of the Boston Symphony Orchestra. Ten days later, he came to international recognition after replacing Music Director William Steinberg mid-concert at Lincoln Center. He made his Carnegie Hall debut days later replacing Mr. Steinberg leading the BSO. He went on to become the BSO’s Principal Guest Conductor, and he has also served as Music Director of the Buffalo Philharmonic, and as a Principal Guest Conductor of the Los Angeles Philharmonic. With the London Symphony Orchestra, he has served as Principal Conductor and Principal Guest Conductor; he is currently Conductor Laureate. He is Artistic Director of the New World Symphony, America’s Orchestral Academy, which he co-founded in 1987. The NWS has helped launch the careers of more than 1,200 alumni worldwide, including more than 15 members of the SFS.

Mr. Tilson Thomas’s recordings have won numerous international awards, including 12 Grammy Awards—11 for San Francisco Symphony recordings. In 2014, he inaugurated SoundBox, the San Francisco Symphony’s alternative performance space and eclectic live music series. His television credits include the New York Philharmonic Young People’s Concerts and, in 2004, he and the SFS launched Keeping Score on PBS-TV. His compositions include From the Diary of Anne Frank; Shówa/Shoáh; settings of poems by Emily Dickinson, Walt Whitman, and Rainer Maria Rilke; Island Music; Notturno; Four Preludes on Playthings of the Wind; and Meditations on Rilke, premiered this season with the SFS. Mr. Tilson Thomas is a Chevalier de l’Ordre des Arts et des Lettres of France, was Musical America’s Musician and Conductor of the Year, and was inducted into the Gramophone Hall of Fame. He has been elected to the American Academy of Arts and Sciences, the American Academy of Arts and Letters, was inducted in the California Hall of Fame, and was awarded the National Medal of Arts by President Obama. Most recently, he was named a 2019 recipient of the Kennedy Center Honors.

Gautier Capuçon performs internationally with many of the world's foremost conductors and instrumentalists is also founder and leader of the Classe d'Excellence de Violoncelle at the Fondation Louis Vuitton in Paris. A multiple award winner, he is acclaimed for his expressive musicianship, exuberant virtuosity, and for the deep sonority of his 1701 Matteo Goffriller cello "L'Ambassadeur."

Highlights of Mr. Capuçon’s 2019–2020 season include appearances with the Los Angeles Philharmonic, Czech Philharmonic, St. Louis Symphony, Singapore Symphony, and the Bavarian Radio Symphony Orchestra. He tours Europe and the US this season with Leipzig Gewandhaus, and Andris Nelsons and San Francisco Symphony with Michael Tilson Thomas and is this season's Artist-in-Residence with the Orchestra della Svizzera Italiana in Lugano. As a chamber musician, he performs this season with pianist Yuja Wang including at Hamburg’s Elbphilharmonie, Vienna’s Konzerthaus, the Barbican Centre in London, and the Philharmonie in Paris, as well as with Renaud Capuçon, Frank Braley, Jérôme Ducros, and Leonadis Kavakos.

Recording exclusively for Erato (Warner Classics), Mr. Capuçon has won multiple awards and holds an extensive discography. His latest album, recorded with Yuja Wang, was released in December and features sonatas by Chopin and Franck. Earlier recordings include concertos by Shostakovich (Mariinsky Orchestra and Valery Gergiev) and Saint-Saëns (Orchestre philharmonique de Radio France and Lionel Bringuier); the complete Beethoven Sonatas with Frank Braley; Schubert's String Quintet with the Ébène Quartet; and Intuition, an album of encores recorded with Paris Chamber Orchestra/Douglas Boyd and Jérôme Ducros. Mr. Capuçon has been featured on DVD in live performances with the Berliner Philharmoniker led by Gustavo Dudamel (Haydn Cello Concerto No.1) and with Lisa Batiashvili, Sächsische Staatskapelle Dresden and Christian Thielemann (Brahms's Concerto for Violin and Cello). A household name in his native France, he also appears on screen and online in shows such as Prodiges, Now Hear This, and The Artist Academy.

The San Francisco Symphony is widely considered to be among the most artistically adventurous and innovative arts institutions in the United States. Under the artistic direction of Michael Tilson Thomas since 1995, the ensemble is a leading presence among American orchestras at home and around the world, celebrated for its artistic excellence, creative performance concepts, active touring, award-winning recordings, and standard-setting education programs. In December 2018, the San Francisco Symphony announced Esa-Pekka Salonen as its Music Director Designate. Mr. Salonen will begin his appointment as the SFS’s 12th Music Director in September 2020, at which time Michael Tilson Thomas will become the Orchestra’s first Music Director Laureate, following his remarkable 25-year tenure as Music Director.

The San Francisco Symphony presents more than 220 concerts and presentations annually for an audience of nearly 450,000 in its home of Davies Symphony Hall and through its active national and international touring. A cornerstone of the organization’s mission, the San Francisco Symphony’s education programs are the most extensive offered by any American orchestra today, providing free comprehensive music education to every first- through fifth-grade student in the San Francisco public schools, and serving more than 75,000 children, students, educators, and families annually. The SFS has won such recording awards as France’s Grand Prix du Disque and Britain’s Gramophone Award, as well as 15 Grammy Awards. SFS radio broadcasts, the first in the nation to feature symphonic music when they began in 1926, today carry the orchestra’s concerts across the country.

This performance is sponsored by Mizuho Americas.

GUSTAV MAHLER Symphony No. 6 in A Minor

For all Carnegie Hall presentations in Stern Auditorium/Perelman Stage, a limited number of partial view (seats with obstructed or limited sight lines or restricted leg room) will be sold for 50% of the full price. For more information on this and other discount ticket programs, including those for students, Carnegie Hall Notables members, and Bank of America customers, visit carnegiehall.org/discounts. Artists, programs, and prices are subject to change.