New Yorkers Come Together For All Together: Songs For Joy on Sunday, April 5 in Zankel Hall

Songwriters From Across The City Explore Bold Visions for Joy With Original Songs Inspired by New Adaptation of “Ode to Joy” Written by Former US Poet Laureate Tracy K. Smith

Citywide Creative Learning Project Is Part of Worldwide Project, All Together: A Global Ode to Joy, Commemorating the 250th Anniversary of Beethoven’s Birth 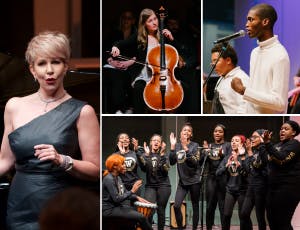 New York, NY, March 3, 2020)— On Sunday, April 5 at 7:00 p.m., New Yorkers of all ages will take the Zankel Hall stage for All Together: Songs for Joy, a special evening of new and original songs inspired by a new adaptation of Friedrich Schiller’s poem “Ode to Joy” by former US Poet Laureate Tracy K. Smith who has reimagined the original poem as a contemporary meditation on community, politics, and spirit.

Continuing a citywide creative learning project that began last fall, the new songs created for this program were written by New Yorkers from Carnegie Hall’s Weill Music Institute (WMI) education and social impact programs. Among the songwriters whose works have been selected for the concert are members of Future Music Project Ensemble, a teen collective that comes together weekly in the Hall’s Resnick Education Wing to create, perform, and produce original music, and members of Carnegie Hall’s Musical Connections workshop at Sing Sing Correctional Facility. Additional songwriters/performers include New York City public school students, WMI teaching artists, songwriters from Carnegie Hall’s Lullaby Project, and teachers who take part in the Hall’s Music Educators Workshop. The concert will also feature celebrated mezzo-soprano Joyce DiDonato and members of Ensemble Connect conducted by James Ross. This one-night-only concert experience promises to be an uplifting and inspiring evening.

The selected songs—composed in a wide variety of styles from pop to soul to classical to Latin and jazz—explore different themes of joy including acceptance, love, hope, peace, and happiness. The songwriter’s original music shows the different expressions and ways that we interact with joy, both as individuals and communities. Listen to demos of these brand new tracks here.

“This season, songwriters from across New York City have reflected on how joy connects communities and inspires hope, creating visionary songs,” said Sarah Johnson, Chief Education Officer and Director of Carnegie Hall’s Weill Music Institute. “What we’re doing by looking at the “Ode to Joy” poem is exploring how the notion of joy can spark conversations that help us to better understand one another.” “The songwriters have been inspired by this global project to create music throughout the season to explore both the light and dark themes of the poem in relevant and inspiring song. We can’t wait to showcase these incredible new songs on the Zankel Hall stage, celebrating the many songwriters from our WMI community.”

“Joy is something that we have to seek, make space for, and welcome,” said Tracy K. Smith. “I was excited to be able to work with things that felt so real and pressing in this project, and to be able to ask them to help me get at something joyful. I hope that some of the questions and wishes that drive the poem speak to similar feelings in the reader and listener.”

This April Songs for Joy program is part of All Together: A Global Ode to Joy, the yearlong, worldwide project led by conductor Marin Alsop during the 250th anniversary of Beethoven’s birth in which Alsop leads 10 orchestras across six continents as they reimagine Beethoven’s Ninth Symphony. Each partner orchestra will work with Ms. Alsop to reimagine the concert experience for their own community, incorporating newly created music alongside the symphony and featuring artists from their own region. In each performance, the ”Ode to Joy” will be adapted or translated anew into a local language.

About Tracy K. Smith
In celebration of the 250th anniversary of Beethoven’s birth, Carnegie Hall commissioned former US Poet Laureate and Pulitzer Prize-winner Tracy K. Smith to reimagine Schiller’s poem as a contemporary meditation on community, politics, and spirit. Ms. Smith has authored four award winning books of poetry including The Body’s Question, which won the Cave Canem prize; Duende, winner of the James Laughlin Award; Life on Mars, winner of the Pulitzer Prize for Poetry; and Wade in the Water. She has also written the critically acclaimed memoir, Ordinary Light, which was a finalist for the National Book Award in nonfiction. She has previously been awarded the Academy of American Poets fellowship and the Stegner fellowship at Stanford University. Ms. Smith has been the librettist of two operas, the second of which, Castor and Patience, will premiere at Cincinnati Opera this summer. She currently teaches at Princeton University.

About Joyce DiDonato
Kansas-born Joyce DiDonato entrances audiences and critics across the globe in operas that range from Mozart and Handel to Rossini, Donizetti, Berlioz and Jake Heggie. Winner of the 2018 Olivier Award for Outstanding Achievement in Opera, she is a multi-Grammy Award winner and a fierce advocate for the arts. An exclusive recording artist with Erato / Warner Classics, the most recent addition to Joyce’s acclaimed discography is Berlioz’ Les Troyens, which won the award for Best Complete Opera Recording at the 2018 International Opera Awards and the 2018 BBC Music Magazine Opera Award, and was nominated in the opera category at this year’s Gramophone Awards. Her solo albums include In War & Peace, which won a 2017 Gramophone Award; Stella di Napoli; the Grammy Award-winning Diva Divo; and Drama Queens. A Carnegie Hall Perspectives artist in the 2019–2020 season, Ms. DiDonato is a longtime partner of Carnegie Hall’s Weill Music Institute. Her first Perspectives series was offered during Carnegie Hall’s 2014-2015 season and included master classes and work with New York City middle school singers participating in WMI’s Count Me In program. In spring 2018, she lent her renowned vocal talents to Hopes and Dreams: The Lullaby Project on Decca Gold (Universal Music Group). The heartwarming album is a collection of songs written by New Yorkers participating in Carnegie Hall’s Lullaby Project, recorded by an impressive array of leading international artists.

About Ensemble Connect
Ensemble Connect is made up of extraordinary professional classical musicians residing in the US who take part in a two-year fellowship program created in 2007 by Carnegie Hall, The Juilliard School, and the Weill Music Institute in partnership with the New York City Department of Education. The program prepares fellows for careers that combine musical excellence with teaching, community engagement, advocacy, entrepreneurship, and leadership by offering top-quality performance opportunities, intensive professional development, and partnerships throughout the fellowship with New York City public schools.

On the concert stage and in schools and communities, Ensemble Connect has earned accolades from critics and audiences alike for the quality of the concerts, the fresh and open-minded approach to programming, and the ability to actively engage any audience. Exemplary performers, dedicated teachers, and passionate advocates of music throughout the community, the forward-looking musicians of Ensemble Connect are redefining what it means to be a musician in the 21st century. To discover more about the program, visit www.ensembleconnect.org.

About All Together: A Global Ode to Joy
In celebration of the 250th anniversary of Beethoven’s birth, All Together: A Global Ode to Joy recasts Beethoven’s Ninth Symphony as a 21st-century call for unity, justice, and empowerment, presenting a rare opportunity for major musical institutions to join in a global conversation as part of a common project. A total of 10 renowned partner orchestras across six continents will work with Marin Alsop to reimagine the concert experience for their own community, incorporating newly created music alongside the symphony and featuring artists from their own region. In each performance, the ”Ode to Joy” will be adapted or translated anew into a local language. From December 2019 through December 2020, concerts will be presented in São Paulo, Brazil; London, England; New York, New York, USA; Baltimore, Maryland, USA; Auckland and Wellington, New Zealand; Sydney, Australia; Vienna, Austria; Beijing, China; and Durban and Johannesburg, South Africa. For more information, visit carnegiehall.orgAllTogether.

Tickets, priced at $20–$30, are available at the Carnegie Hall Box Office, 154 West 57th Street, or can be charged to major credit cards by calling CarnegieCharge at 212-247-7800 or by visiting the Carnegie Hall website, carnegiehall.org.

For information on discount ticket programs, including those for students, Notables members, and Bank of America customers, visit carnegiehall.org/discounts. Artists, programs, and prices are subject to change