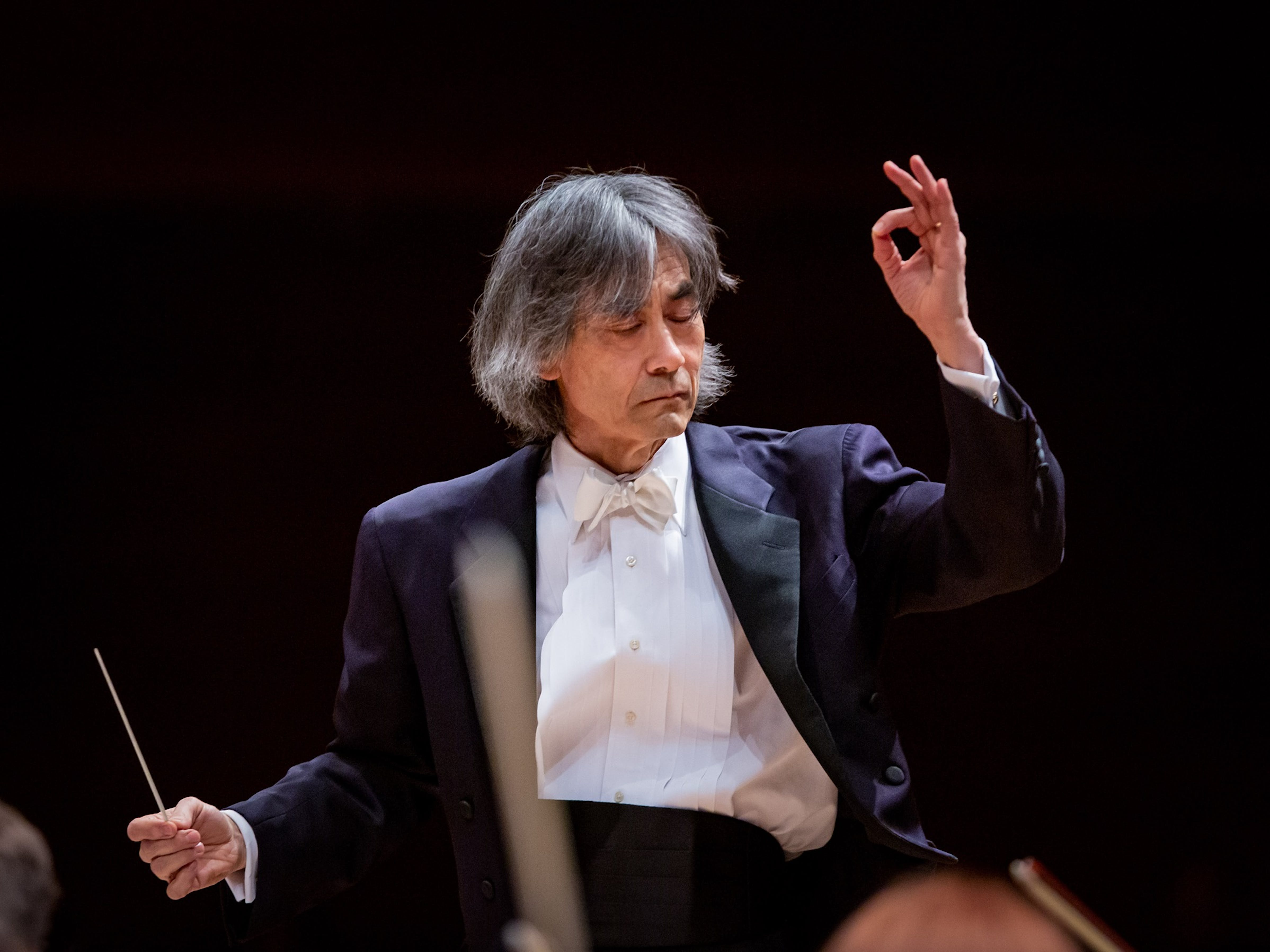 Kent Nagano made his Carnegie Hall debut in 1993 leading the America Composers Orchestra in Stern Auditorium / Perelman Stage on a program that included the New York premiere of John Adams’s El Dorado and the US premiere of Joji Yuasa’s Eye on Genesis II. Since then he has conducted Orchestre symphonique de Montréal at Carnegie Hall four times including in 2011 as part of Spring for Music and most recently in 2017. For Mr. Nagano’s performance history at Carnegie Hall, click here.

In addition, Shostakovich’s Symphony No. 13 was first performed at Carnegie Hall by OSM (then billed as the Montreal Symphony Orchestra) on October 27, 1984. For the performance history of that work, click here.

About the Artists
Kent Nagano is known for the clarity, elegance and intelligence of his interpretations. With a solid reputation on the international scene, he directs a vast repertoire ranging from Baroque to contemporary musical creation and is also concerned with presenting little-known works and renewing the interpretation of the established repertoire. Maestro Nagano has been music director of the Orchestre symphonique de Montréal since 2006. He was music director of the German Symphony Orchestra in Berlin from 2000 to 2006 (he is now honorary conductor) and the Bavarian State Opera, in Munich, from 2006 to 2013. Then he became principal guest conductor of the Symphony Orchestra of Gothenburg, Sweden, in 2013. Since 2015, he has been music director of the State Opera and principal conductor of the Orchestra Hamburg Philharmonic.

His recordings with the OSM on Sony Classical/Analekta include Mahler’s Orchestral Songs with Christian Gerhaher, Beethoven’s Piano Concertos Nos. 4 & 5 and a complete recording of all the Symphonies by Beethoven of which the album Ideals of the French Revolution with Symphony No. 5 won a Juno award. In March 2016, Decca released recording of the North American premiere of L'Aiglon, a rarely performed opera by Honegger and Ibert, conducted by Nagano in March 2015, on CD. Further releases by Decca are Danse Macabre with works by Dukas, Saint-Saens, Ives and others in autumn 2016 and a recording of Bernstein's A quiet place in June 2018 on the occasion of the composer's 100th birthday. In autumn 2019 John Adams' Common tones in simple time & harmony (Decca) and at the end of 2019 the Lukas Passion by Penderecki (BIS) will be released.

Maestro Nagano was appointed Commander of the Order of Montreal, Grand Officer of the National Order of Quebec and Companion of the Arts and Letters of Quebec, in addition to having been awarded the Meritorious Service Medal of the Governor General of Canada.

Pianist, conductor, and composer Mikhail Pletnev was the Gold Medal and First Prize winner of the 1978 Tchaikovsky International Piano Competition when he was 21, a prize that earned him early recognition worldwide. An invitation to perform at the 1988 superpower summit in Washington led to a friendship with Mikhail Gorbachev and the historic opportunity to make music in artistic freedom.

In 1990, Mr. Pletnev formed the first independent orchestra in Russia's history. Many of the country's finest musicians joined him in launching the Russian National Orchestra. Under his leadership as artistic director and principal conductor, the RNO has achieved great stature among the world’s orchestras. His recordings have earned numerous prizes, including a 2005 Grammy Award for his own arrangement for two pianos of Prokofiev’s Cinderella, with Martha Argerich and Mr. Pletnev at the keyboards. He received Grammy nominations for recordings of Schumann’s Symphonic Etudes (2004) and the Rachmaninov and Prokofiev Piano Concertos No. 3 with the RNO and conductor Mstislav Rostropovich (2003). His critically acclaimed album of Scarlatti’s Keyboard Sonatas (Virgin/EMI) received a 1996 Gramophone Award. His recording of the complete Beethoven symphonies and piano concertos (Deutsche Grammophon) was named “Best of 2007” by The New Yorker.

Mikhail Pletnev's compositions include works for orchestra, piano, strings and voices. His transcriptions for piano of Tchaikovsky's Nutcracker Suite and Sleeping Beauty were selected, along with his performance of Tchaikovsky's Second Piano Concerto and The Seasons, for the 1998 anthology Great Pianists of the 20th Century (Philips Classics).

This season, he returns to the Metropolitan Opera, Staatsoper Hamburg, and Royal Opera House Covent Garden as Escamillo in Bizet’s Carmen, a role that he will also perform for his debut at the Dallas Opera. Mr. Vinogradov will also return to Los Angeles Opera as Philippo II in Verdi’s Don Carlo, and at The Bolshoi as the title role in Mozart’s Le nozze di Figaro.

Previous highlights include his company debuts at LA Opera and the Bayerische Staatsoper in Carmen, and the Metropolitan Opera for Donizetti’s Lucia di Lammermoor and Verdi’s Luisa Miller as well as his debut at the BBC Proms in Beethoven’s Symphony No. 9; Bizet’s Ivan the Terrible in concert with the Rundfunk Sinfonieorchester Berlin, Rimsky-Korsakov’s The Golden Cockerel at the Teatro Real Madrid, Rossini’s Guillaume Tell and Verdi’s Macbeth at Staatsoper Hamburg, Verdi’s I vespri siciliani in Valencia, Puccini’s La bohème at Teatro Regio di Torino and on tour to Savonlinna Opera Festival, Rossini’s Il viaggio a Reims, Le nozze di Figaro, Berlioz’s La damnation de Faust and Carmen at The Bolshoi.

Founded in 1934, the Orchestre symphonique de Montréal (OSM) is a distinguished leader of musical life in Quebec and Canada. Recognized as one of the finest orchestras in the world, whose core activity is to perform the vast orchestral repertoire with conductors and soloists of the highest calibre, the OSM is an essential cultural ambassador. Under the direction of American conductor Kent Nagano since 2006, the OSM perpetuates several rich traditions rooted in its long history of social involvement and embodied in far-reaching projects, world class tours, and a superb discography. Firmly anchored in today’s world, the OSM’s innovative artistic programming in both concerts and recordings brings modern-day relevance to the symphonic repertoire while strengthening the Orchestra’s place at the heart of its home base in Quebec’s metropolis. Over the years, the OSM has crisscrossed Canada and toured abroad, travelling to Quebec’s Far North as well as to the United States, Latin America, and several countries in Europe and Asia. The OSM’s discography totals more than a hundred recordings on the Decca, Analekta, CBC Records, ECM, EMI, Philips, and Sony labels, earning more than 50 national and international awards.