Renée Fleming Leads Third Year of SongStudio, an Innovative Workshop for Young Singers Celebrating the Art of the Vocal Recital

Vocalists and Pianists from Around the Globe Selected to Participate 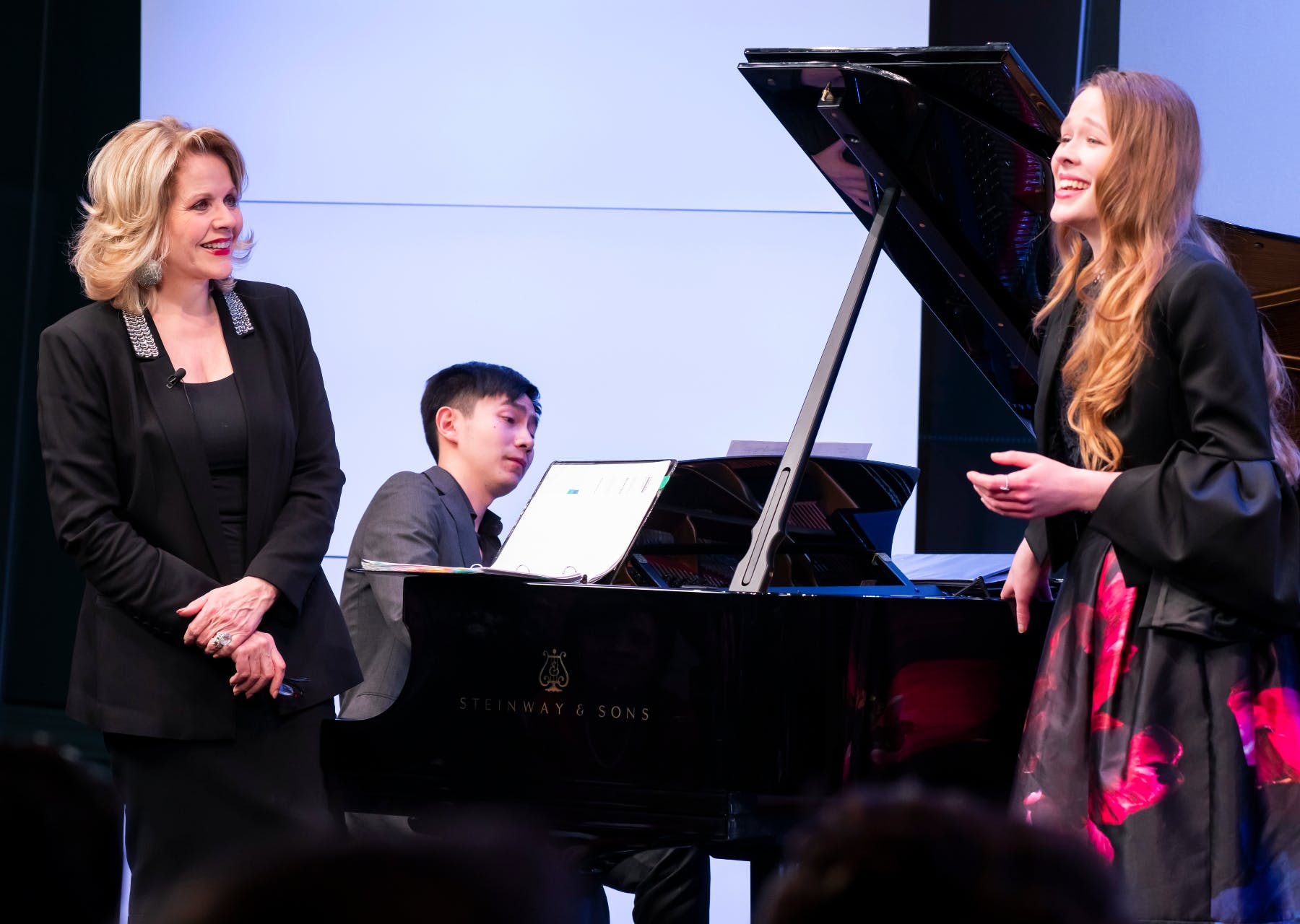 (New York, NY, January 14, 2021)— From January 18–23, 2021, renowned soprano Renée Fleming will mentor six pairs of aspiring young singers and pianists from around the world in the third year of SongStudio, an innovative program exploring the future of the vocal recital. The annual intensive workshop—hosted by Carnegie Hall’s Weill Music Institute—will bring emerging vocalists and pianists together with leading artists and special guests for a week of instruction via digital platforms this year, in light of precautions for COVID-19.

“The art of the song recital is something I’m passionate about,” said Renée Fleming. “So I’m delighted to work with SongStudio, building on the legacy of the great Marilyn Horne, whose own workshop at Carnegie took place over two decades. In addition to honing skills of language, style, and interpretation, I enjoy encouraging young musicians to explore innovative approaches to this venerable art. That includes developing presentations of their work for digital platforms. We all know that video is a crucial medium in the special circumstances of this year, but it has been an increasingly important tool for artists and it isn’t going away.”

The week will feature special guests, leading singers, and other artists from a variety of disciplines lending their insights and expertise in workshops, master classes, and discussions including pianist Graham Johnson and mezzo-soprano Dame Sarah Connolly. Beloved tenor Lawrence Brownlee will lead a discussion with the young artists on social justice and song. Musicologist Susan Youens, who is widely regarded as one of the world’s foremost authorities on song and a longtime program annotator for Carnegie Hall, will give a lecture on interpreting Lieder. All participating singers and pianists will receive one-on-one private lessons and coaching throughout the week, learning from teachers, coaches, and collaborative pianists including Thomas Lausmann, Director of Music Administration at the Metropolitan Opera; Javier Arrebola, former faculty of the Indiana University Jacobs School of Music and former Chair of the Collaborative Piano Department at Boston University; and Gerald Martin Moore, Director of Yale Opera at the university’s School of Music. Each vocalist and pianist duo will record virtual performance videos, in collaboration with Emmy Award-winning director Habib Azar, which will be released later this season.

Following a rigorous audition process open to talented young singers from around the world, 12 artists have been selected to participate from Australia, China, Denmark, Malaysia, Russia, and the United States:

About the Artist
Renée Fleming is one of the most highly acclaimed singers of our time, performing on the stages of the world’s greatest opera houses and concert halls. Honored with four Grammy® awards and the US National Medal of Arts, Renée has sung for momentous occasions from the Nobel Peace Prize ceremony to the Diamond Jubilee Concert for Queen Elizabeth II at Buckingham Palace. In 2014, she brought her voice to vast new audiences as the first classical artist to sing the US National Anthem at the Super Bowl.

Renée is a member of the Board of Trustees for Carnegie Hall, where she leads the SongStudio program for emerging artists. A spring 2020 duo recital with world-renowned pianist Evgeny Kissin at Carnegie, part of a planned international tour in, was prevented by the pandemic. In May, Renée launched Music and Mind LIVE, an online show exploring the intersection of music and arts with human health and the brain, receiving more than 650,000 views, from 70 countries. The series was inspired by the Sound Health initiative Renée leads as Artistic Advisor to the John F. Kennedy Center, in partnership with the NIH and the NEA. She has given presentations on this material around the world.

In 2019, Renée appeared opposite Ben Whishaw in Norma Jean Baker of Troy to open The Shed in New York City. That summer, she performed world premieres by André Previn and Kevin Puts at Tanglewood, and she made her London musical theater debut in The Light in the Piazza, bringing the acclaimed production to Los Angeles and Chicago in the autumn. Renée earned a Tony Award nomination for her performance in the 2018 Broadway production of Carousel.

This sixteen-time Grammy nominated artist has recorded everything from complete operas and song recitals to jazz and indie rock. Her voice is featured on the soundtracks of the Best Picture Oscar winners The Shape of Water and The Lord of the Rings: The Return of the King. Renée’s other awards include the Fulbright Lifetime Achievement Medal, Germany’s Cross of the Order of Merit, and France’s Chevalier de la Légion d’Honneur. www.reneefleming.com

About Carnegie Hall’s Weill Music Institute
Carnegie Hall’s Weill Music Institute (WMI) creates visionary programs that embody Carnegie Hall’s commitment to music education, playing a central role in fulfilling the Hall’s mission of making great music accessible to as many people as possible. With unparalleled access to the world’s greatest artists, WMI’s programs are designed to inspire audiences of all ages, nurture tomorrow’s musical talent, and harness the power of music to make a meaningful difference in people’s lives. An integral part of Carnegie Hall’s concert season, these programs facilitate creative expression, develop musical skills and capacities at all levels, and encourage participants to make lifelong personal connections to music.

The Weill Music Institute generates new knowledge through original research and is committed to giving back to its community and the field, sharing an extensive range of online music education resources and program materials for free with teachers, orchestras, arts organizations, and music lovers worldwide. Nearly 800,000 people each year engage in WMI’s programs through national and international partnerships, in New York City schools and community settings, and at Carnegie Hall. This includes more than half a million students and teachers worldwide who participate in WMI’s Link Up music education program for students in grades 3 through 5, made possible through Carnegie Hall partnerships with more than 110 orchestras in the US, as well as internationally in New Zealand, Canada, China, Japan, Kenya, and Spain.

Lead support for SongStudio is provided by Mr. and Mrs. Anthony B. Evnin and the A.E. Charitable Foundation.

SongStudio is part of the Marilyn Horne legacy at Carnegie Hall.

Image at top of release by © Chris Lee