Carnegie Hall's Early Childhood Programs Reach Hundreds of Families in New York City, Across the Country and the World During the 2020-2021 Season

Big Note, Little Note, a New Program for Families with Infants, Continues this Winter in Partnership with Harlem Children’s Zone

Through the Lullaby Project, New and Expectant Parents Write Personal Lullabies for their Babies in Collaboration with Professional Artists Online 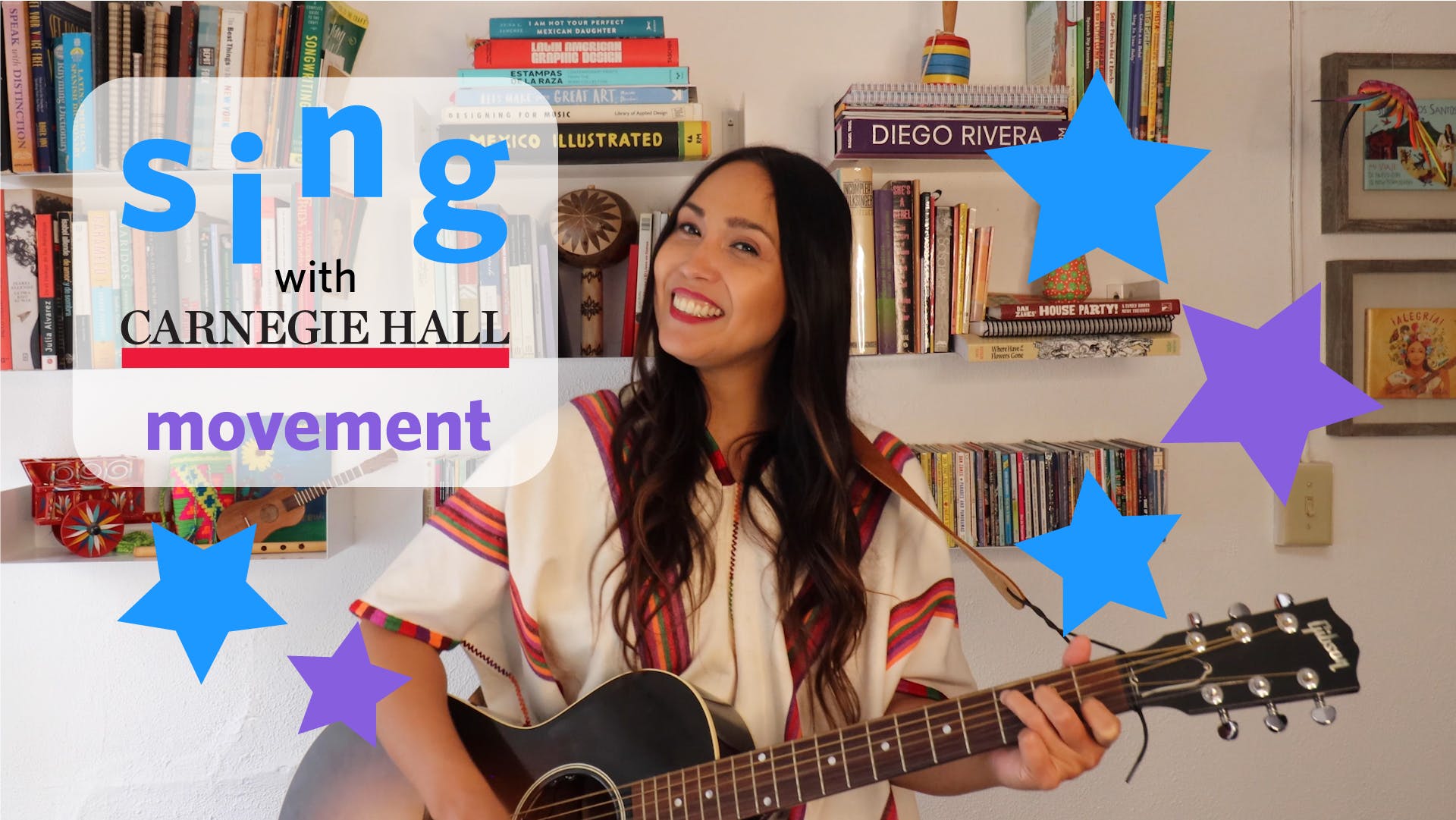 (March 1, 2021; NEW YORK, NY)—Throughout the season, hundreds of families and children will have opportunities for free musical learning, play, discovery, and connection through Carnegie Hall Weill Music Institute’s (WMI) early childhood programs. A new video series, Sing with Carnegie Hall, features weekly interactive sing-alongs—covering a range of topics including rhythm, play, feelings, and imagination—to encourage connection, well-being, and creativity for families with little ones (ages 2-5) at home. Each video is hosted by Carnegie Hall teaching artist Emily Eagen and features special guests—including Grammy nominated singers Falu Shah and Sonia De Los Santos—leading families in original and beloved songs from around the globe. Through April 3, videos premiere each Saturday on the Hall’s Facebook and YouTube page channels, as part of Learn with Carnegie Hall, a collection of WMI programming created for families, educators, and young musicians, exploring the power of music to spark growth, curiosity, and connection. Following the premiere, episodes are available for on-demand viewing on the Hall’s website at carnegiehall.org/sing. The first Sing with Carnegie Hall episode from February 27th, “Movement” featuring Sonia De Los Santos, is now available to watch. The full calendar of upcoming episodes is listed below.

The following week, on April 6, Carnegie Hall will release a set of videos featuring original music from “Camille’s Rainbow,” a new early childhood performance for families and caretakers with children ages 0-2. “Camille’s Rainbow”—co-commissioned by Carnegie Hall and Minnesota Opera—is a joyful, immersive musical journey that explores a magical world of color and celebrates the transformative power of connection, communication, and unbridled creative play. Six animated videos designed by Dan Scully and featuring original music by Thomas Cabaniss and Saskia Lane and lyrics by Zoe Palmer—will introduce audiences to the music and themes of the live performance, which will premiere at Carnegie Hall when conditions allow.

Earlier this season, Big Note, Little Note, a new music class for New York City families, piloted an all-digital 10-week music class that offered a range of experiences for families and caregivers to engage with their babies through musical play, singing, instrument exploration, and more. The program, offered at no cost, is centered around community, and supports family well-being, early childhood development, and parent-child connection. The next set of classes for caregivers and toddlers runs through the end of March, in partnership with Harlem Children’s Zone. A selection of short videos and an accompanying “Music Moments” activities series is available for parents on the Big Note, Little Note webpage, each dedicated to a specific early childhood topic such as movement, brain building, language, play, soothing exercises, rhythm, and more.

Carnegie Hall’s Lullaby Project
The Lullaby Project, which pairs new and expectant parents and caregivers with professional artists to write and sing personal lullabies for their babies, supporting maternal health, aiding child development, and strengthening the bond between parent and child, returns this season with partners in New York City, nationally, and across the globe serving approximately 500 families. In New York City, the project will reach about 250 families this year through all-digital residencies through partnerships with several city agencies, including the NYC Department of Homeless Services (DHS), NYC Health + Hospitals, and New York-Presbyterian Hospital. From September to June, Carnegie Hall teaching artists work with community sites over Zoom weekly, bi-weekly, or monthly to write and sing personal lullabies with participants. Carnegie Hall also provides free resources and materials throughout the season to partners to inspire musical learning in their communities. Throughout the year, approximately 20 select lullabies from various New York City sites are professionally recorded by musicians and parents.


Select lullabies are also performed live each year as part of the Lullaby Project’s Celebration Concert. On Friday, June 11, 2021 at 5:00 p.m., mothers, fathers, musicians, and partners from around the world will gather online to celebrate original songs created as part of the project. The concert will be available for audiences to livestream on Carnegie Hall’s Facebook and YouTube channels as well as on carnegiehall.org/learn.

Extending across the country and through international programs, the Lullaby Project enables more than 40 partner organizations (22 across the US and 20 abroad) to support hundreds of families in their own communities. Click here for a current list of Lullaby Project partners across the US, ranging from Washington and Texas to Pennsylvania and Vermont, as well as international partners in Europe, South America, Asia, and Oceania. The annual Lullaby Project international convening on June 8-11 will provide professional development sessions for new and prospective partners led by expert teaching artists.

Additionally, Lullaby Project professional artists have been connecting directly with families across the United States to write personal lullabies in free, one-on-one online sessions, which parents and caregivers have been able to sign up for on Carnegie Hall’s website. Additional public writing sessions are planned for April 2021.

“We are delighted to be a part of Carnegie Hall’s Lullaby Project. Our daughter was born shortly before the world went into lockdown due to the global pandemic, and the normal worries of being new parents have been heightened by the current circumstances. Particularly in these uncertain times, it has been wonderful to be part of such a joyful initiative that focuses on our individual and collective hopes for a better future. We loved our songwriting session with Eleni. She spent a lot of time learning about us and our journey, and helped us translate our love for our daughter into poetry. The end result was personal and perfect. Music has a way of binding memories. We hope our sweet girl will carry our song for her through life and always remember how much we cherish her.” said Kavita and Shantanu, Lullaby Project songwriters from Washington, D.C.”

The first Lullaby Project took place at Jacobi Medical Center in the Bronx in December 2011, and since then nearly 2,500 families have written original songs for their children, hundreds of which are available for listening and sharing on the Carnegie Hall’s Lullaby Soundcloud page at soundcloud.com/CarnegieHallLullaby, which currently has nearly 130,000 listens in more than 50 countries. Parents are offered a creative opportunity to communicate feelings, hopes, and dreams for their child, working side by side with professional musicians to write lyrics and music. Lullabies have been written in more than 20 different languages and a wide range of musical styles, reflecting the diverse backgrounds of families that participate in the program. At the end of the songwriting process, each parent receives a recording of their lullaby to listen to and sing with their baby to further support parent-child bonding and early childhood development.

Carnegie Hall expanded its free digital offerings to support families throughout the ongoing COVID-19 pandemic through a new family resource page, which is filled with fun activities that promote musical learning and play with children. Favorite activities include a video for parents on singing a simple lullaby; tips on writing and singing your own lullaby; a playlist featuring a collection of Lullaby Project favorite songs for singing with your baby; interactive games; and coloring books that help children learn about musical instruments and icons, such as Duke Ellington.