Through Carnegie Hall’s Lullaby Project, New and Expectant Parents Write Personal Lullabies for their Babies in Collaboration with Professional Artists 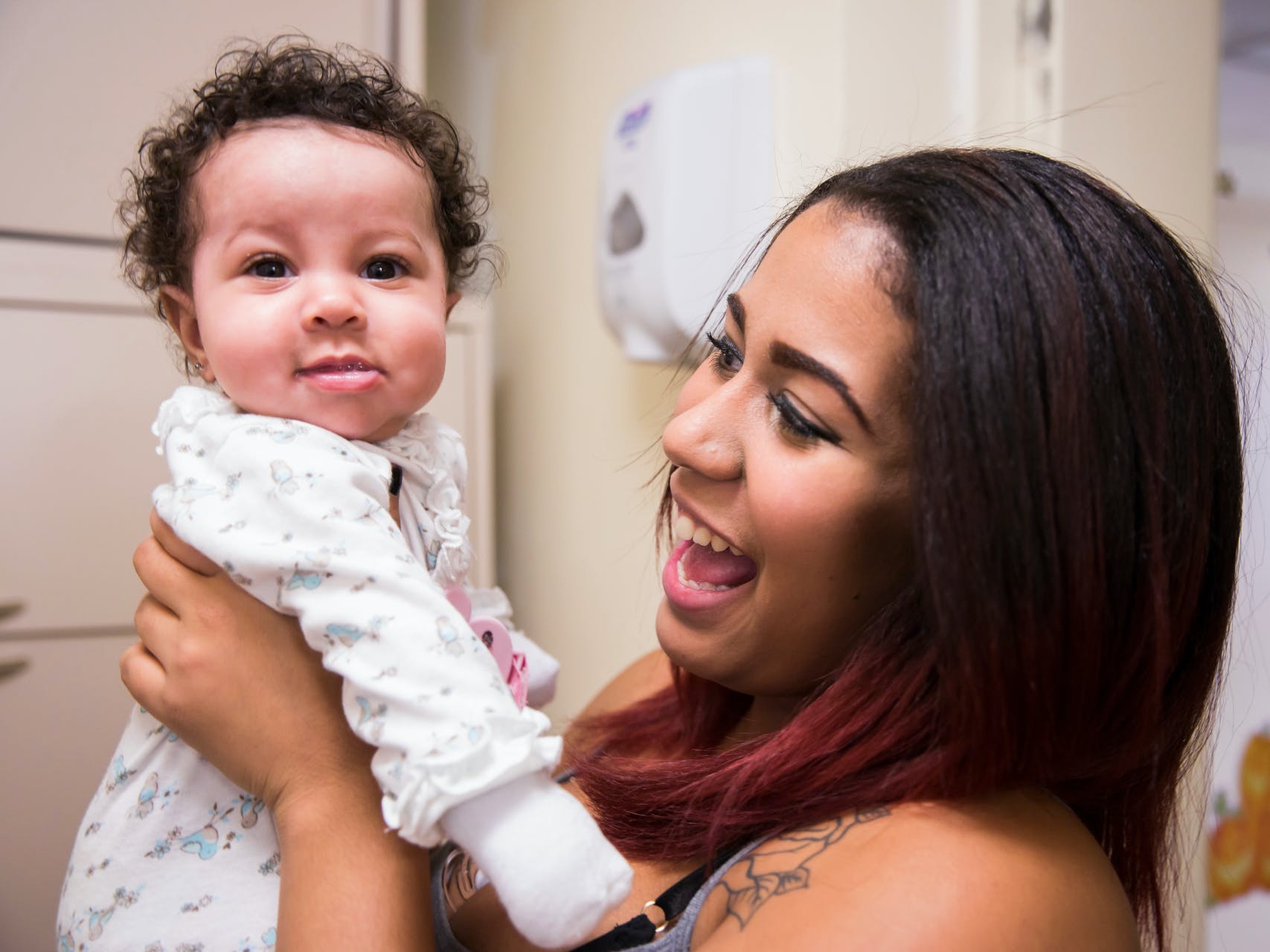 (NEW YORK, NY, May 20, 2021)— Carnegie Hall today announced that families, musicians, and partners from around the world will gather online Friday, June 11 at 5:00 p.m., for the Lullaby Project’s annual Celebration Concert to showcase original songs created as part of the project. The concert will be available to stream for free on Carnegie Hall’s website, Facebook, and YouTube channels, as well as on-demand following the stream on carnegiehall.org. The Lullaby Project, pairs new and expectant parents and caregivers with professional artists to write and sing personal lullabies for their babies, supporting maternal health, aiding child development, and strengthening the bond between parent and child. This season, the project serves approximately 500 families with more than 40 partners in New York City, nationally, and around the globe.

The June Celebration Concert will feature personal lullabies recorded and performed by teaching artists and parents in their homes, alongside stories behind the songs, songwriters, and the community of artists and partners who worked together to create them. This intimate concert will feature many songs written this year across New York City partner sites as well as from families across the US and abroad. The Lullaby Project Celebration Concert is presented as part of Learn with Carnegie Hall, a collection of the Hall’s Weill Music Institute programming created for families, educators, and young musicians, exploring the power of music to spark growth, curiosity, and connection.

“We are so excited to bring together parents, caregivers, partners, and more to listen to the beautiful lullabies written this season as part of Carnegie Hall’s Lullaby Project,” said Sarah Johnson, Chief Education Officer and Director of WMI. “Writing a lullaby allows families to express their own wishes and dreams, love, and hopes for their child, nurturing a love of music while also strengthening the connection between themselves and their child. Listening to the lullabies written around the globe over the course of this challenging year will be powerful, and we’re looking forward to celebrating our vibrant Lullaby community with audiences at home.”

From June 8-11, 2021, new and prospective partners will connect online for the Lullaby Project’s annual international convening leading up to the celebration concert on June 11. Partners will share best practices on facilitating the project, including dialogue on collaborative songwriting, and participate in a session led by Takiema Bunche-Smith on equitable practices when working with families. Dr. Dennie Palmer Wolf, a leading evaluator in the arts, will lead a session on evaluative strategies and practice to support research and evaluation efforts globally. Additional researchers and colleagues who will present alongside Dr. Palmer Wolf include: Hannah Morales, photojournalist at National Geographic; Jo Ward of England’s National Health System; and Samuel Mehr of Harvard Music Lab.

Sing with Carnegie Hall and Camille’s Rainbow Offer Opportunities for Families to Connect
Over the past two seasons, the Hall has provided families with little ones at home a plethora of high-quality, creative activities to keep children engaged. A new video series, Sing with Carnegie Hall, features interactive sing-alongs—covering a range of topics including rhythm, play, feelings, and imagination—to encourage connection, well-being, and creativity for families with little ones (ages 2-5) at home. Each video is hosted by Carnegie Hall teaching artist Emily Eagen and features special guests, leading families in original and beloved songs from around the globe. The collection of videos is now available to stream on-demand at carnegiehall.org/sing.

The Hall also recently released a set of videos featuring original music from Camille’s Rainbow, a new early childhood performance for families and caretakers with children ages 0-2. “Camille’s Rainbow”—co-commissioned by Carnegie Hall and Minnesota Opera—is a joyful, immersive musical journey that explores a magical world of color and celebrates the transformative power of connection, communication, and unbridled creative play. Six animated videos—designed by Dan Scully and featuring original music by Thomas Cabaniss and Saskia Lane and lyrics by Zoe Palmer—introduce audiences to the music and themes of the live performance, which will premiere at Carnegie Hall when conditions allow.

About Carnegie Hall’s Lullaby Project
Carnegie Hall’s Lullaby Project pairs new parents with professional artists to write personal lullabies for their babies, supporting maternal health, aiding child development, and strengthening the bond between parent and child. In New York City this year, the project will reach 250 families through different city agencies and community sites, including healthcare settings, homeless shelters, high schools, and correctional facilities. Carnegie Hall also provides free resources and materials throughout the season to partners to inspire musical learning in their communities. Extending across the country and through several international programs, the Lullaby Project enables more than 40 national and international partner organizations to support families in their own communities, including work with partners in Europe, South America, Asia, and Oceania. The first Lullaby Project took place at Jacobi Medical Center in the Bronx in December 2011, and since then more than 2,500 families have written original songs for their children, many of which are available for listening and sharing at soundcloud.com/CarnegieHallLullaby. Lullabies have been written in over 20 different languages and a wide range of musical styles, reflecting the diverse backgrounds of families that participate in the program.

Carnegie Hall expanded its free digital offerings to support families throughout the ongoing COVID-19 pandemic through a new family resource page, which is filled with fun activities that promote musical learning and play with children. Favorite activities include a video for parents on singing a simple lullaby; tips on writing and singing your own lullaby; a playlist featuring a collection of Lullaby Project favorite songs for singing with your baby; interactive games; and coloring books that help children learn about musical instruments and icons, such as Duke Ellington.

About Carnegie Hall’s Weill Music Institute
Carnegie Hall’s Weill Music Institute (WMI) creates visionary programs that embody Carnegie Hall’s commitment to music education, playing a central role in fulfilling the Hall’s mission of making great music accessible to as many people as possible. With unparalleled access to the world’s greatest artists, WMI’s programs are designed to inspire audiences of all ages, nurture tomorrow’s musical talent, and harness the power of music to make a meaningful difference in people’s lives. An integral part of Carnegie Hall’s concert season, these programs facilitate creative expression, develop musical skills and capacities at all levels, and encourage participants to make lifelong personal connections to music. The Weill Music Institute generates new knowledge through original research and is committed to giving back to its community and the field, sharing an extensive range of online music education resources and program materials for free with teachers, orchestras, arts organizations, and music lovers worldwide. More than 800,000 people each year engage in WMI’s programs through national and international partnerships, in New York City schools and community settings, and at Carnegie Hall. This includes more than half a million students and teachers worldwide who participate in WMI’s Link Up music education program for students in grades 3 through 5, made possible through Carnegie Hall partnerships with more than 115 orchestras in the US, as well as internationally in New Zealand, Canada, China, Japan, Kenya, and Spain.

Photo at top of release by Chris Lee; Camille’s Rainbow by Dan Scully.