Carnegie Hall Presents The Eyes of World: From D-Day to VE Day on November 10 in Stern Auditorium / Perelman Stage 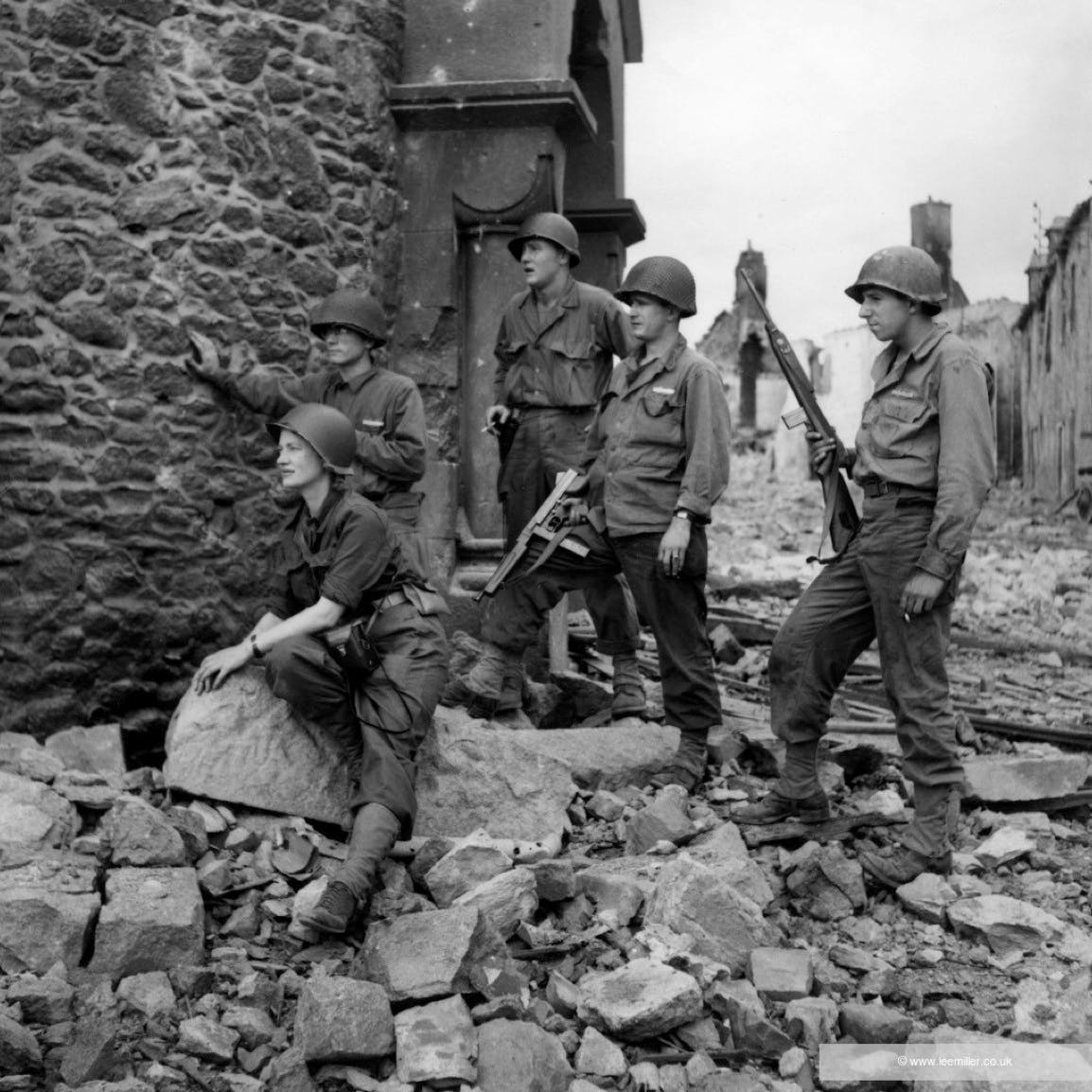 Through music, archival photos, video, and personal letters, The Eyes of the World tells the dramatic story of the final 11 months of World War II in Europe through the words and images of Ernest Hemingway, LIFE magazine war photographer Robert Capa, Vogue model-turned-photojournalist Lee Miller, and a young soldier, named Jerry, who landed on Utah Beach on June 6, 1944. The journeys of these four remarkable figures intersect and intertwine as they serve as the “eyes for the world” from D-Day to eventual victory. Along the way, their stories cross paths with such remarkable characters as Pablo Picasso and Hemingway’s estranged wife, war correspondent Martha Gellhorn.

Ian Weinberger (music director of Hamilton on Broadway) serves as music supervisor and leads the 58-piece Orchestra of St. Luke’s, performing his arrangements of music from Saving Private Ryan and Band of Brothers, as well as original arrangements created for this performance. Broadway vocalists Lilli Cooper (Tootsie), Adam Jacobs (Aladdin), Kate Rockwell (Mean Girls), and Daniel Yearwood (Hamilton) perform popular and often profound music of this era from Glenn Miller and Edith Piaf to Woody Guthrie, among others. The immersive concert experience is directed by Peter Flynn.

“I did not start out looking for the four figures we follow in this production—they revealed themselves as we researched a single flag flown on a Higgins Craft and the boys it carried to the beaches,” says John Monsky. “Every twist and turn surprised us as the story unfolded making the hair on the back of my neck stand on end as Lee Miller and others come together in some of the war’s most dark and haunting places,” Monsky adds. “It is thrilling to have such a talented cast of true Broadway stars bring these remarkable and inspiring characters to life.”

“John has a passion for combining storytelling, music, visuals, and film in unique and creative ways that bring history to life and that connect emotionally with audiences,” said Clive Gillinson, Executive and Artistic Director of Carnegie Hall. “He did this brilliantly in his previous two events at Carnegie Hall, covering the intensity of the Vietnam War both on the battlefield and at home, and the unforgettable Apollo 11 launch and moon landing. As we reopen the Hall this fall, we look forward to presenting his next production which will take us through some of the most important moments of World War II, relaying personal stories of heroism and resilience that continue to inspire and resonate with us today.”

On June 5, 1944, just one day before D-Day, Major General Dwight D. Eisenhower told American forces, “The eyes of the world are upon you. The hopes and prayers of liberty-loving people everywhere march with you.” While D-Day marked a turning point and pathway to victory, the landings and battles that followed would be among the most brutal for the American troops and Allied forces.

In addition to the revelatory exploration of the way the paths of the four main figures cross and intersect, The Eyes of the World also recounts the War experiences of Black Americans and women, often lost to history. The all-Black 761st Tank Battalion serves heroically in a segregated army. The Women’s Army Corps units are tasked with cleaning up years of mail for troops desperate for news from home. Some of the most remarkable photographs of any war are taken by Robert Capa on Omaha Beach. Vogue’s Lee Miller, who was among the 127 accredited female journalists covering the war, reports from the frontlines and captures some of the most resonant and powerful images of Dachau. And Ernest Hemingway, who had sounded a warning bell about the rise of fascism in a speech from the Carnegie Hall stage in 1937 reports on—and participates in—the action.

Several American flags that landed on the beaches of Normandy help drive the production’s narrative, a use of material culture to connect us to our past, which is a hallmark of the American History Unbound productions.

The performance is dedicated to America’s veterans and their families who have sacrificed for all of us, and to the late Nick Cordero. The Broadway star had long been associated with these productions and was scheduled to perform in The Eyes of the World at Carnegie Hall in 2020, but tragically lost his life to COVID-19 at the age of 41.

John Monsky—the creator, writer, and narrator of the American History Unbound series—is a historian, writer, producer, lecturer, and lawyer. Monsky’s reverence for historical ephemera is at the core of his productions with his meticulous research of flags and other tangible objects driving his narratives exploring landmark events in our history. The flag collection, which Monsky began as a child, with a kerchief carried by President Theodore Roosevelt, has been reported on in both The New Yorker and Art & Antiques Magazine.

In 2019, Monsky was honored by the New-York Historical Society, where he has developed and workshopped many of his lectures and serves as a Trustee. He has recently appeared on CNN and written a New York Times Op-Ed, providing historical perspective on current events.

Monsky graduated from Yale College as a history major, where he was awarded the White Prize in History and the Deforest Oratory Prize. After attending Harvard Law School and working as a law clerk, he served as an attorney for the US Senate Congressional Committee that was investigating the Iran-Contra affair. Today, Monsky is a partner and general counsel of Oak Hill Capital, an investment firm.

The American History Unbound series combines live music performed by celebrated Broadway actors and a full orchestra, film and photography from the National Archives, and historically significant flags and material culture to explore watershed moments in American history. Created and narrated by historian John Monsky, lectures to-date, presented at Carnegie Hall, the New-York Historical Society, The Parrish Art Museum in Water Mill, NY, the Norton Museum of Art in West Palm Beach, FL, and Yale University, have explored D-Day, the Vietnam War, and the race to the moon. In addition to its sold-out live performances, American History Unbound is now expanding its meticulously researched and evocative storytelling to film, producing a documentary and exhibition for the American Battle Monuments Commission’s American Cemetery in Normandy, France.

Wednesday, November 10 at 8:00 PM
THE EYES OF THE WORLD: FROM D-DAY TO VE DAY
Stern Auditorium / Perelman Stage

The Eyes of the World was developed in close cooperation with the American Battle Monuments Commission and the New-York Historical Society.

Tickets, priced at $30—$135, are available at the Carnegie Hall Box Office, 154 West 57th Street, or can be charged to major credit cards by calling CarnegieCharge at 212-247-7800 or by visiting the Carnegie Hall website, carnegiehall.org.

For Carnegie Hall Corporation presentations taking place in Stern Auditorium/Perelman Stage, a limited number of seats, priced at $10, will be available day-of-concert beginning at 11:00 a.m. Monday through Saturday and 12:00 noon on Sunday until one hour before the performance or until supply lasts. The exceptions are Weil Music Institute and gala events. These $10 tickets are available to the general public on a first-come, first-served basis at the Carnegie Hall Box Office only. There is a two-ticket limit per customer.

Please note: to support a safe reopening for in-person events and in accordance with the advice of medical and public health experts, all artists, visitors, and staff will be required to show proof of full vaccination against COVID19 with a vaccine approved by the World Health Organization (WHO) in order to enter Carnegie Hall. Currently we are unable to welcome attendees under the age of 12 who are not fully vaccinated. While inside Carnegie Hall, all guests must wear a properly fitting mask over their nose and mouth except when eating or drinking in designated areas.