Plus, New Yorkers of All Ages in the Hall’s Weill Music Institute Programs Explore the Infinite Possibilities of Afrofuturism by Creating Original Music, Art, and Stories 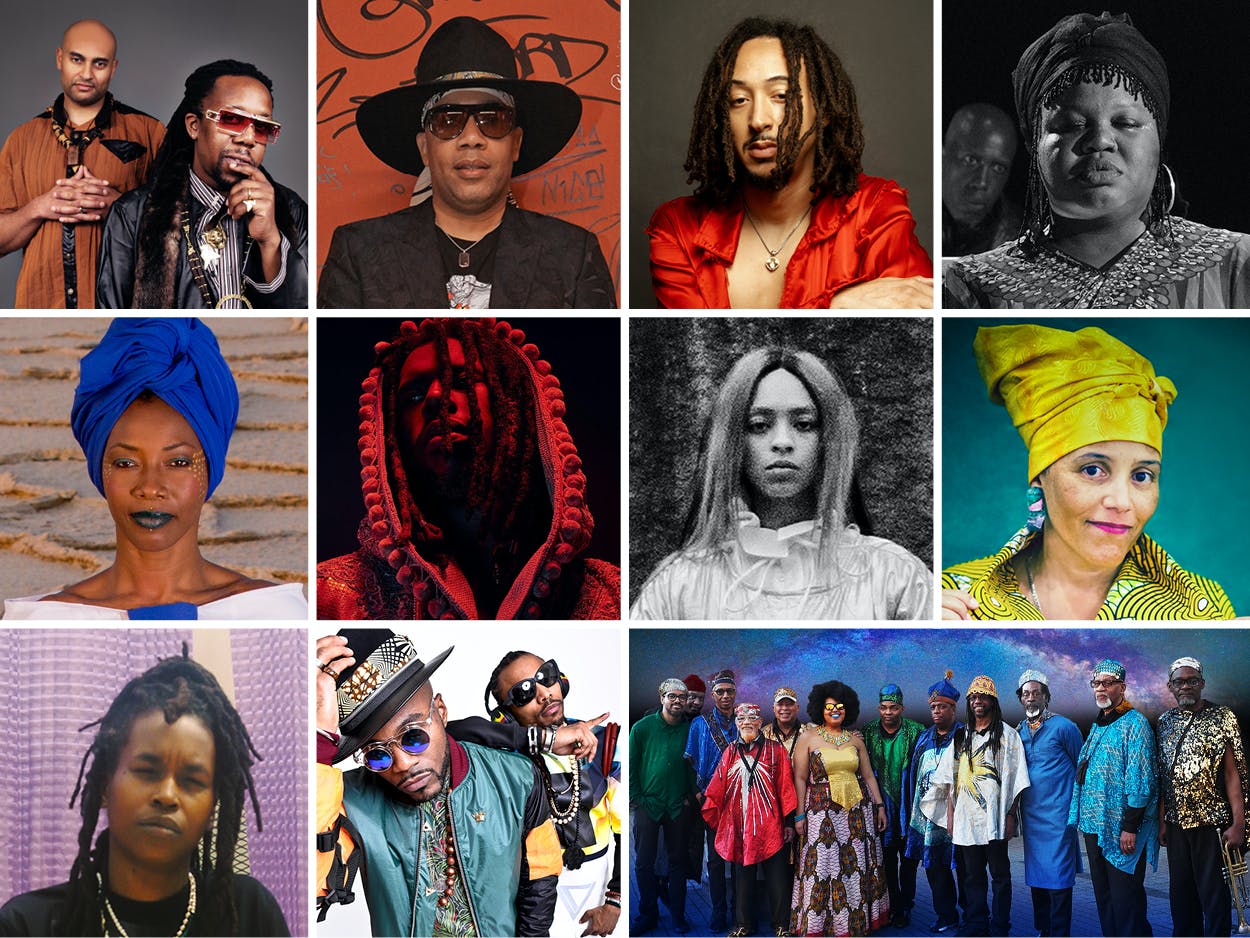 Festival concerts at Carnegie Hall by celebrated artists will explore Afrofuturism’s boundless sonic essence through jazz, funk, R&B, Afrobeat, hip-hop, electronic music, and more. In addition, education and social impact programming and special events created by Carnegie Hall’s Weill Music Institute will invite New Yorkers of all ages to consider the infinite possibilities of Afrofuturism. More than 60 leading cultural institutions from across New York City and beyond will extend the scope of the festival with a diverse array of live and online events, including exhibitions, performances, talks, and more with a complete schedule to be announced in January. To create this imaginative festival, Carnegie Hall’s programming team has collaborated with five prominent experts on Afrofuturism forming its Afrofuturism Curatorial Council.

Tickets to Afrofuturism festival concerts at Carnegie Hall will go on sale to the general public beginning Wednesday, November 17, 2021 at 11:00 a.m.

The concept for Carnegie Hall’s Afrofuturism festival took root over several years as a natural extension of some of the Hall’s past explorations of Black culture—beginning with Jessye Norman’s HONOR! festival in 2009, celebrating the African American cultural legacy, and, more recently, with festival programming looking at art and music created in the time of slavery, the Great Migration, and during the Civil Rights Movement in the 1960s.

“In planning for this festival, it’s been fascinating to see how Afrofuturism embraces so many art forms—from music and the visual arts to science fiction and technology,” said Clive Gillinson, Carnegie Hall’s Executive and Artistic Director. “It’s a creative and inventive theme, and we hope this will be an opportunity for people to embark on a journey of discovery, ask questions, and dream about future possibilities.”

“When I found out that Carnegie Hall was interested in doing a citywide festival on Afrofuturism, I was so excited,” said Sheree Renée Thomas in a video introducing the festival. “What was once on the outskirts of society is now so fascinating, so intriguing, and so powerful that it has reached the mainstream of society.”

“This festival is going to take Carnegie Hall into a whole different place,” said King James Britt. “This cultural exchange that's about to happen, it's really magical. It's a powerful time.”

“Our expert Curatorial Council has provided invaluable insights and guidance,” said Mr. Gillinson. “Their involvement and enthusiasm have reinforced how important it is that Carnegie Hall is placing focus on this incredibly timely and forward-looking theme. The broad nature of the festival enables us to collaborate with many leading cultural institutions from across New York City—including new and returning festival partners—who will present a diverse array of programming. It also offers an inspirational starting point to engage people from throughout our community to share their own creative work and artistic viewpoints.”

In education and social impact programs created by Carnegie Hall’s Weill Music Institute (WMI), young musicians, teachers, and creators from New York City and across the US will explore the infinite possibilities of Afrofuturism throughout the Hall’s 2021-2022 season. Imagination is a key ingredient of WMI’s programming which invites people of all ages to explore their creativity. Participants will have the opportunity to engage in collaborative artistic explorations, both in person and online, creating original music, art, sound, technology, and stories that bring to life the possibility of a world shaped by music learners of all ages, experiences, and circumstances. Professional artists will lead workshops embedded in WMI’s wide range of innovative programs and encourage participants to create new work that points to a different vision of the future through the lens of Black cultures. A selection of the new work inspired by the theme of Afrofuturism will be featured online and at live events.

These public events are part of a wide variety of Afrofuturism-themed programs presented by WMI throughout the season. In the lead up to the festival, young writers ages 14-19, have been engaging in a series of online poetry workshops this fall with Afrofuturism Curatorial Council member and celebrated author Sheree Renée Thomas and special guests. Among other programs, WMI will invite families and children with caregivers to enjoy a free Afrofuturism-themed Spring Family Day in the Hall’s Resnick Education Wing on Sunday, April 10.

The Afrofuturism festival will extend beyond Carnegie Hall through multidisciplinary public programming presented by 60+ partners—leading cultural and academic organizations across New York City and beyond—exploring African and African diasporic philosophies, speculative fiction, mythology, comics, cosmology, technology, and more. A diverse range of online offerings will also include film screenings, exhibitions, and talks with leading thinkers and creatives in this multitiered experience.

Participating partner organizations for the Afrofuturism festival (as of November 16, 2021) in New York and beyond are:

Click here to view the Afrofuturism festival video including commentary from members of the festival’s Afrofuturism Curatorial Council.

For the most up-to-date information on festival performances and events at Carnegie Hall and partner institutions, visit carnegiehall.org/afrofuturism in the coming months.

Support for Afrofuturism is provided by the Howard Gilman Foundation and Bank of America.

This project is supported in part by an award from the National Endowment for the Arts.


Support for the visual arts components of the Afrofuturism festival has been provided by the Helen Frankenthaler Foundation.

About Carnegie Hall Festivals
Carnegie Hall’s large-scale, citywide festivals bring together performances and events designed to stimulate the curiosity of audiences, offering them the opportunity to explore compelling and important topics. In partnership with many of the greatest cultural institutions in New York City and beyond, the Hall’s festivals feature programming that creates journeys of discovery across the spectrum of the arts, including music, dance, theater, film, literature, and more.

Carnegie Hall’s first major international festival, Berlin in Lights, was presented in November 2007, exploring the vibrant city that is Berlin today. It was followed by two citywide festivals examining the dynamic culture and distinctive history of American music—Bernstein: The Best of All Possible Worlds in fall 2008 and Honor! A Celebration of the African American Cultural Legacy in spring 2009. Ancient Paths, Modern Voices, exploring Chinese music and culture took place in fall 2009. These were followed by JapanNYC, an ambitious two-part festival in December 2010 and spring 2011; Voices from Latin America in November/December 2012; Vienna: City of Dreams in February/March 2014; Ubuntu: Music and Arts of South Africa in October/November 2014; La Serenissima festival in February 2017, celebrating the music and arts from the Venetian Republic; The ’60s: The Years That Made America in 2018, exploring the turbulent decade that was the 1960s through the lens of arts and culture, including music's role as a meaningful vehicle to inspire social change; Migrations: The Making of America in 2019, tracing the journeys of people from different origins and backgrounds who helped to shape and influence the evolution of American culture; Voices of Hope—the Hall’s first-ever online festival in spring 2021; and the upcoming Afrofuturism festival in February-March 2022.


About Carnegie Hall
Since it opened in 1891, Carnegie Hall has set the international standard for musical excellence as the aspirational destination for the world’s finest artists. From Tchaikovsky, Dvořák, Mahler, and Bartók to George Gershwin, Billie Holiday, Duke Ellington, Benny Goodman, Judy Garland, and The Beatles, music making by a long list of artists representing the best of every genre has filled Carnegie Hall over the years. The Hall’s unique history has grown out of its stunning acoustics, the beauty of its three concert halls, and its location in New York City, where it has played a central role in helping to elevate the city into one of the world’s great cultural capitals. The Hall presents a wide range of performances each season on its three stages—the renowned Stern Auditorium / Perelman Stage, intimate Weill Recital Hall, and innovative Zankel Hall—including concert series curated by acclaimed artists and composers; citywide festivals featuring collaborations with leading NYC cultural institutions; orchestral performances, chamber music, new music concerts, and recitals; and the best in jazz, global, and popular music. Complementing these performance activities, Carnegie Hall’s Weill Music Institute creates wide-reaching music education and social impact programs that annually serve more than 800,000 people in the New York City area, nationally, and internationally, and even more through a growing number of initiatives online.

Tickets to Afrofuturism festival concerts and events at Carnegie Hall will go on sale to the general public beginning Wednesday, November 17, 2021 at 11:00 a.m. Tickets to concerts are available at the Carnegie Hall Box Office, 154 West 57th Street, or can be charged to major credit cards by calling CarnegieCharge at 212-247-7800 or by visiting the Carnegie Hall website, carnegiehall.org.

Please note: To support a safe reopening for in-person events and in accordance with the advice of medical and public health experts, everyone entering Carnegie Hall will be required to show proof of full vaccination against COVID-19 with a vaccine approved by the World Health Organization (WHO). In addition, everyone on Carnegie Hall’s premises will be required to wear a properly fitting mask over the nose and mouth at all times.