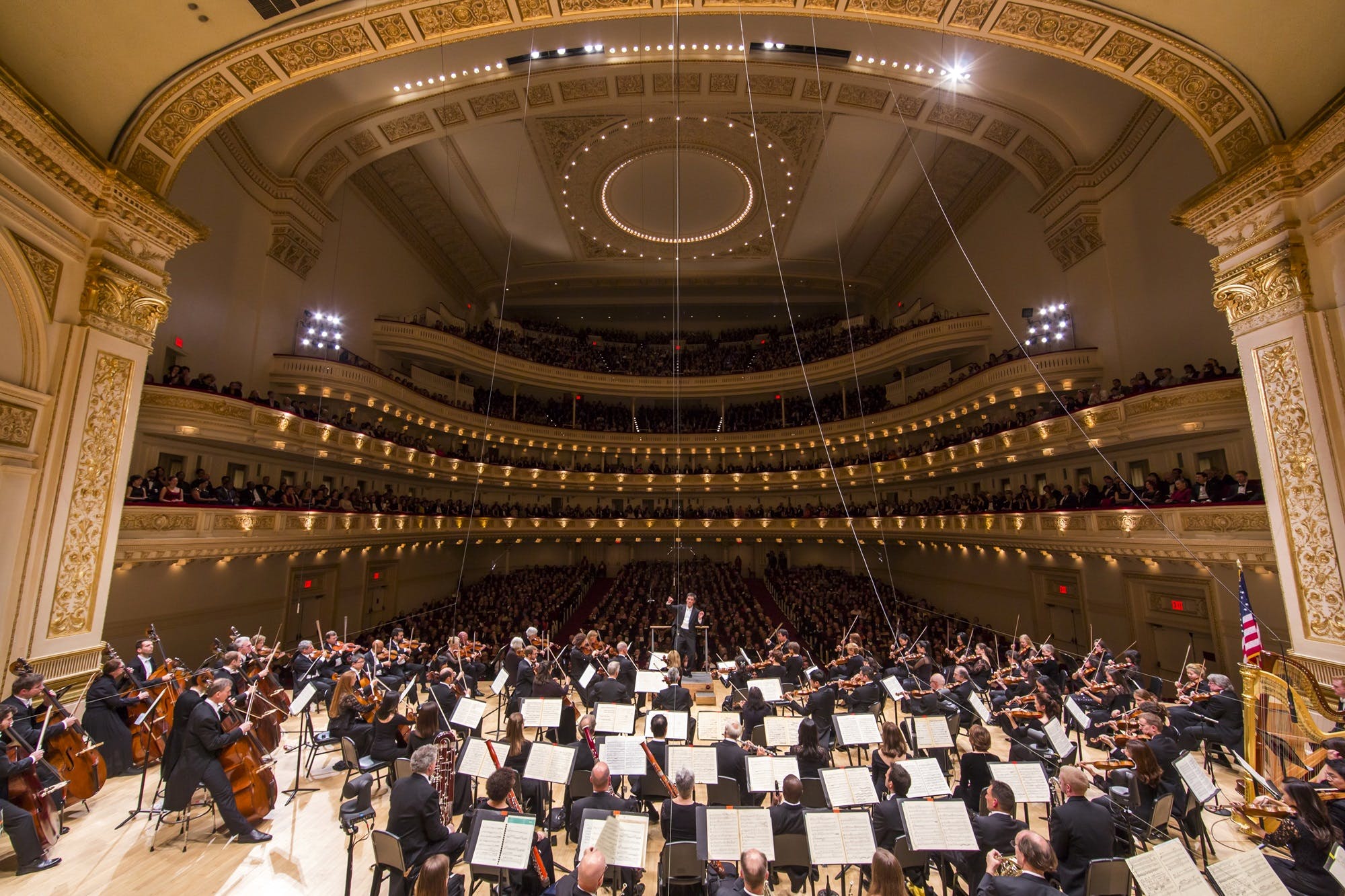 Conductor Susanna Mälkki makes her Stern Auditorium / Perelman Stage debut on Thursday, January 6 at 8:00 p.m. leading the orchestra in Adolphus Hailstork’s An American Port of Call, Sibelius’s Symphony No. 5, and John Adams’s Saxophone Concerto with soloist Branford Marsalis. This performance will be heard live by music lovers around the globe as part of the Carnegie Hall Live radio broadcast and digital series. Produced by WQXR and Carnegie Hall and hosted by WQXR’s Jeff Spurgeon and New Sounds’ John Schaefer, the concert will be broadcast by WQXR 105.9 FM in New York, streamed on wqxr.org and carnegiehall.org/wqxr.

The Philharmonic returns on Wednesday, April 27 at 8:00 p.m. with Music Director Jaap van Zweden leading the orchestra in the first of three performances, which features the US premiere of Nico Muhly’s In Certain Circles with pianists Katia and Marielle Labèque. The orchestra’s April program also includes Debussy’s Prélude à l'après-midi d'un faune and La mer alongside Wagner’s Prelude and Liebestod from Tristan und Isolde.

Maestro van Zweden and the New York Philharmonic return on Friday, May 6 at 8:00 p.m. with Igor Levit as featured soloist in Brahms’s Piano Concerto No. 1. The evening’s program is completed with Bartók’s Concerto for Orchestra.

The Philharmonic’s final program this season on Friday, June 10 at 8:00 p.m. includes the world premiere of Sarah Kirkland Snider’s Forward Into Light, Barber’s Violin Concerto with Hilary Hahn, and Mahler’s Symphony No. 1.

Susanna Mälkki is sought-after by the highest level symphony orchestras and opera houses worldwide. Currently in her sixth season as chief conductor of the Helsinki Philharmonic Orchestra, she continues to fascinate audiences with her insightful interpretations, extending the repertory with a fresh and an impressively broad approach to programming. She is also principal guest conductor at the Los Angeles Philharmonic.

New Orleans–born Branford Marsalis is an award‐winning saxophonist, band leader, featured classical soloist, and a film and Broadway composer. In the process, he has become a multi-award‐winning artist who has received three Grammys and a citation by the National Endowment for the Arts as a Jazz Master and is seen as an avatar of contemporary artistic excellence. He made his Carnegie Hall debut in 1989 performing with fellow saxophonist Sonny Rollins. He returned to the Hall a dozen times, most recently in a 2015 tribute to singer-songwriter Bill Withers.

Katia and Marielle Labèque are sibling pianists renowned for their ensemble of synchronicity and energy. Their musical ambitions started at an early age and they rose to international fame with their contemporary rendition of Gershwin’s Rhapsody in Blue (one of the first gold records in classical music) and have since developed a stunning career with performances worldwide. They made their Carnegie Hall debut 40 years ago in 1982 with John McLaughlinand returned two dozen times over the next four decades appearing both in recital and with the Saint Paul Chamber Orchestra, St. Louis Symphony Orchestra, National Symphony Orchestra, and most recently with Michael Tilson Thomas at the San Francisco Symphony in 2008.

Pianist Igor Levit has been named Musical America’s Recording Artist of the Year (2020), Gramophone Classical Music Awards Artist of the Year (2020), and the 2018 Gilmore Artist. In November 2020 he was nominated for the Grammy Award for Best Classical Instrumental Solo. He first performed in Weill Recital Hall in 2008 collaborating with violinist Leticia Moreno and returned to Zankel Hall in 2017 and 2018 in solo recital. His most recent performance in 2019 was with the Vienna Philharmonic Orchestra conducted by Michael Tilson Thomas. He makes his Stern Auditorium / Perelman Stage recital debut on January 13, 2022.

Three-time Grammy Award-winning violinist Hilary Hahn’s barrier-breaking attitude toward classical music and her commitment to sharing her experiences with a global community have made her a fan favorite. She first played in Stern Auditorium / Perelman Stage in 1996, one day before her seventeen birthday, with Christoph Eschenbach leading The Philadelphia Orchestra. She returned with the St. Louis Symphony Orchestra, Orchestra of St. Luke’s, Royal Concertgebouw Orchestra, and Minnesota Orchestra. She made her Carnegie Hall recital debut in 2002 with pianist Natalie Zhu. Her most recent appearance at the Hall was again with The Philadelphia Orchestra in 2017 and Music Director Yannick Nézet-Séguin.

Born in Amsterdam, Jaap van Zweden was named Musical America’s 2012 Conductor of the Year, and was awarded the prestigious Concertgebouw Prize in 2020. In 1997 he and his wife, Aaltje, established the Papageno Foundation to support families of children with autism. He made his Carnegie Hall debut in 1999 conducting the Netherlands Symphony Orchestra and returned in 2011 with the Dallas Symphony Orchestra as part of Spring for Music. These concerts mark his first appearance at Carnegie Hall leading the New York Philharmonic.

From its debut appearance in 1892 to the historic opening-night concert that launched the Hall’s 125th anniversary season, the New York Philharmonic’s connection to Carnegie Hall is long and glorious. The New York Philharmonic plays a leading cultural role in New York City, the United States, and the world, and has built a tradition of innovation that has allowed it to adapt and thrive over more than 179 years. In the 2021–2022 season, Music Director Jaap van Zweden and the Philharmonic reaffirm their vital commitments to serving as New York’s orchestra and to championing new music. The orchestra presents concerts at two Lincoln Center venues—Alice Tully Hall and the Rose Theater at Jazz at Lincoln Center’s Frederick P. Rose Hall—during the accelerated renovation of David Geffen Hall, scheduled to reopen in the fall of 2022. With Jaap van Zweden in his fourth season as Music Director, the orchestra gives world, U.S., and New York premieres of ten commissions; explores The Schumann Connection, conducted by Gustavo Dudamel; and joins with The Mary and James G. Wallach Artist-in-Residence Anthony Roth Costanzo in Authentic Selves: The Beauty Within, a two-week exploration of questions of identity. The Philharmonic also builds on the strong connections with New York City’s communities forged through impactful collaborations with local organizations developed over the course of the pandemic. The orchestra has commissioned and/or premiered important works, from Dvořák’s New World Symphony to Tania León’s Pulitzer Prize–winning Stride, and released more than 2,000 recordings since 1917, streams performances on NYPhil+, and shares its extensive history free online through the New York Philharmonic Leon Levy Digital Archives. Founded in 1842, the New York Philharmonic is the oldest symphony orchestra in the United States.