Perfect for Valentine’s Day:
Prokofiev’s Romeo and Juliet
with the Stuttgart Ballet in stunning
production of a timeless love story 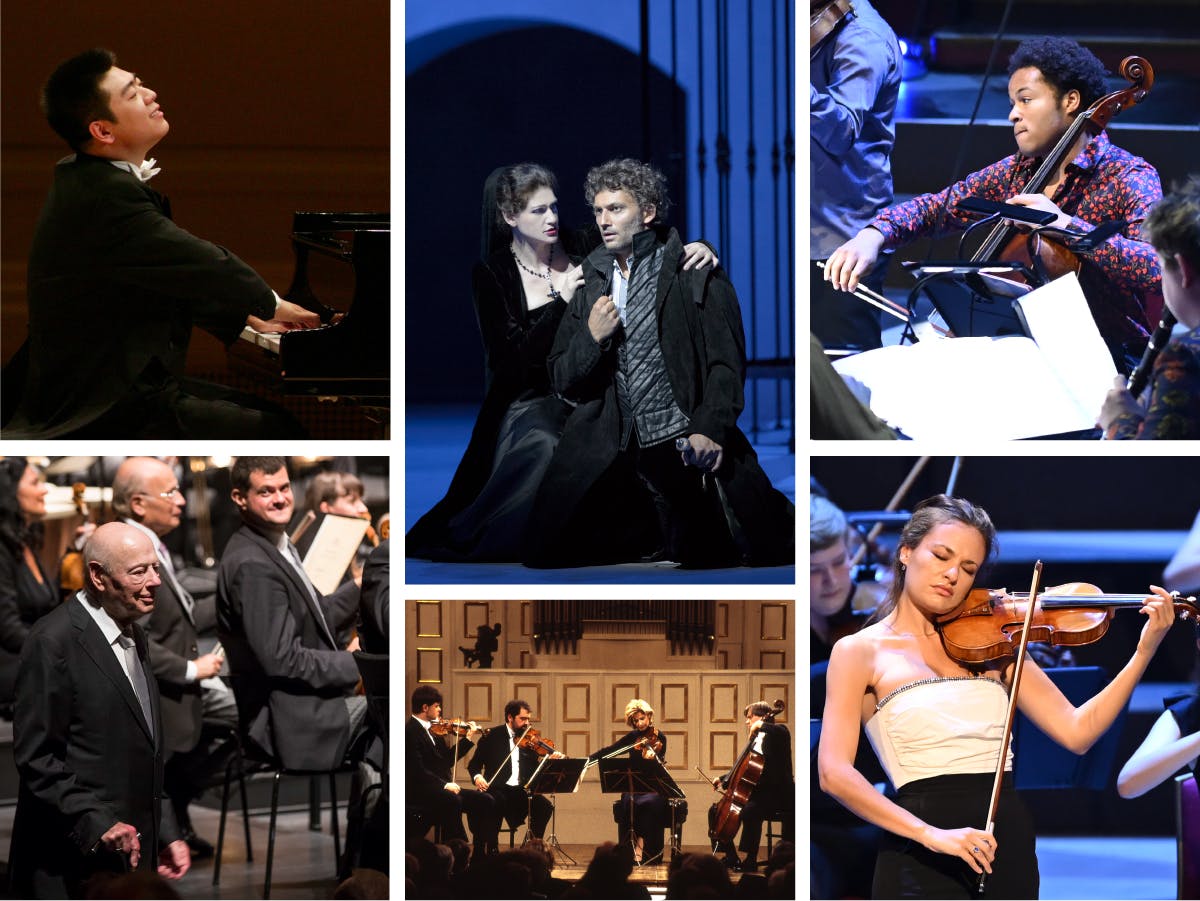 Available in the United States and internationally on the Apple TV app, the premium channel is aligned with Carnegie Hall’s mission to bring the transformative power of music to the widest possible audience. New program offerings will be added to the channel monthly, creating an ever-growing destination for the best arts programming.

At age 21, the renowned pianist Lang Lang had already performed twice at Carnegie Hall—first with the Baltimore Symphony Orchestra led by Yuri Temirkanov in 2001 and later with the New York String Orchestra under Jaime Laredo in 2002—before making his acclaimed sold-out Carnegie Hall recital debut on November 7, 2003.

In 2019, Bernard Haitink capped his 65-year conducting career by leading the Vienna Philharmonic Orchestra in a special farewell concert at the Salzburg Festival. The performance features Beethoven’s Piano Concerto No. 4 with star pianist Emanuel Ax and Bruckner’s Symphony No. 7. A favorite of Carnegie Hall audiences since his first appearance in 1961 with the Royal Concertgebouw Orchestra, this last filmed performance by Maestro Haitink confirms his reputation as one of the finest Bruckner interpreters ever.


• Carnival of the Animals with the Kanneh-Mason Family

One of Britain’s most popular children’s book authors Michael Morpurgo joins the seven talented Kanneh-Mason siblings and other star instrumentalists at Royal Albert Hall for a staged performance of Saint-Saëns’s much-loved suite The Carnival of the Animals from the 2021 BBC Proms, a program perfect for the whole family.

Another exciting performance from the 2021 BBC Proms features American conductor Jonathon Heyward leading the National Youth Orchestra of Great Britain in specially commissioned music by Laura Jurd, the UK premiere of Jessie Montgomery’s Banner, and Prokofiev's Second Violin Concerto with Nicola Benedetti, one of the most sought-after violinists of her generation. The performance is completed by Beethoven’s Third Symphony, “Eroica.”


• Mahler, Live: A Dialogue Between Two Ballets with the Vienna State Ballet


“Mahler, Live,” a ballet evening presented at the Vienna State Opera in 2020, is a dialogue between two outstanding ballets of different eras—the world premiere of “4” by Martin Schläpfer, director of the Vienna State Ballet, set to Mahler’s Fourth Symphony and Hans van Manen‘s “Live,” an icon of dance history from 1979 with music by Liszt.


• Verdi’s Don Carlo with Jonas Kaufmann from the Salzburg Festival

Internationally known as one of the finest ensembles of our time, the Hagen Quartet performs Beethoven's highly-demanding String Quartet in F Major, Op. 135: the composer's last string quartet and his final complete work in any genre. Filmed at Salzburg’s annual Mozart Week in 2000.

In the mid-1960s, Herbert von Karajan set out to record all nine Beethoven symphonies on film with the Berliner Philharmoniker. The result is a milestone in the history of music on film with each masterwork interpreted in distinctive productions representing the artistic vision of different directors. For Beethoven’s choral-orchestral extravaganza Symphony No. 9, von Karajan made his debut as film director as he led the Philharmoniker with soloists Gundula Janowitz, Christa Ludwig, Jess Thomas, and Walter Berry plus the Chorus of the Deutsche Oper Berlin in 1968.

The esteemed late conductor Bernard Haitink explores Beethoven’s Missa solemnis in this 2014 performance with the Bavarian Radio Symphony Orchestra—an ensemble with whom he was associated for more than 50 years—joined by the Bavarian Radio Chorus and renowned soloists: Genia Kűhmeier, Elisabeth Kulman, Mark Padmore, and Hanno Muller-Brachmann.

Vincent Dumestre and his Le Poème Harmonique take audiences on a musical journey to the Italian Renaissance with Il Viaggio, a 2020 performance captured at Rome’s Palazzo Farnese. The baroque ensemble marks its twentieth anniversary, collaborating with mezzo-soprano Eva Zaïcik to pay homage to the musicality of Bellerofonte Castaldi, his contemporaries Monteverdi and Frescobaldi, and more.

Acclaimed tenor Rolando Villazón sings Italian arias by Handel in this intimate 2008 concert with the Gabrieli Players under Paul McCreesh, filmed in St. Paul’s Church in Deptford, near London, one of Great Britain’s finest Baroque churches.

From 2021, the exquisite mezzo-soprano Cecilia Bartoli joins virtuoso conductor-pianist Daniel Barenboim and the Vienna Philharmonic Orchestra for two of the composer’s arias at Salzburg’s Mozart Week. Presented to an empty Great Hall of the Mozarteum Salzburg due to COVID-19, this program also includes the “Prague” Symphony and Mozart’s Piano Concerto No. 24.

• Prokofiev’s Romeo and Juliet with the Stuttgart Ballet

Fifty-five years after its premiere, the Stuttgart Ballet revisits John Cranko’s company-defining Romeo and Juliet in a stunning 2017 performance of the timeless production. Impeccable dancers tell the most famous love story of all time set to Prokofiev’s superb score.

Launched in December 2021, Carnegie Hall+ was created through a partnership between Carnegie Hall and Unitel, the world’s leading classical music audiovisual producer and distributor. Presentations featured on the channel—including full-length concerts, operas, ballets, documentaries, artist profiles, and family programming—will be selected from Unitel’s stellar catalog, one of the largest of its kind in the world, and curated by Carnegie Hall.

Founded more than 50 years ago in Munich, Germany by Leo Kirch and Herbert von Karajan, Unitel has worked with artists for more than half a century to capture landmark performances and productions utilizing the latest available technology. Given the company’s long-standing emphasis on quality, Carnegie Hall+ enables viewers to create an optimal home theater experience, offering state-of-the-art video and audio formats with all presentations offered in high-definition (HD) and newer programs available in 4K Ultra HD (4K UHD) and Dolby Atmos.

In its initial launch phase, Carnegie Hall+ is available to music lovers as a premium channel on the Apple TV app in the United States and 61 territories worldwide, including Australia, Canada, South Africa, and the United Kingdom. The channel will soon expand into other Apple TV territories and languages. It will become available on additional service providers later this year.

Carnegie Hall+ is currently available to customers in English in the US and 61 territories worldwide through Apple TV channels on the Apple TV app on iPhone, iPad, Apple TV, iPod touch, Mac, popular smart TVs from Samsung, LG, Sony, VIZIO, TCL, and others, Chromecast with Google TV, Roku and Amazon Fire TV devices, and PlayStation and Xbox consoles.

Customers can sign up for a seven-day free trial and subscribe directly to Carnegie Hall+ on the free Apple TV app for $7.99 per month (prices may vary by country).