Upcoming Events This Winter and Spring
Include Three Zankel Hall Performances
of Wolfe’s Celebrated Music
Including Steel Hammer, Cruel Sister,
and Anthracite Fields Performed by
Bang on a Can All-Stars, Ensemble Signal,
The Choir of Trinity Wall Street, and More 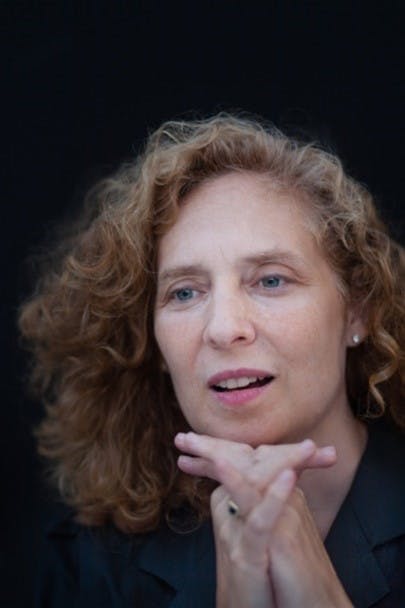 Pulitzer Prize-winning composer and MacArthur Fellow Julia Wolfe launches her residency as Carnegie Hall’s Richard and Barbara Debs Composer’s Chair for the 2021–2022 season on February 16 with the digital premiere of Oxygen. This rapid-fire composition, written during the pandemic for an all-star cast of twelve flutists, was captured last fall in a new video directed by Jeremy Robins. The online presentation is the first in a series of programs highlighting Wolfe's compositions at Carnegie Hall. The following three performances showcase some of her most significant works, including Steel Hammer, Cruel Sister, and Anthracite Fields, performed live in Zankel Hall. A champion of contemporary music, Wolfe also joins Carnegie Hall in curating two programs of works by living composers later this spring, including six world premieres and five Carnegie Hall commissions, performed by Ensemble Connect and the Asphalt Orchestra.

“As a composer, I am very drawn to human stories and how someone can tell history in a very different and powerful way with music,” says Ms. Wolfe. “It’s my belief that if I can have incredible experiences writing and hearing new music that many others can too, and I am thrilled that Carnegie Hall has given me the opportunity to share those experiences in various ways this season.”

Ms. Wolfe’s residency launches on Wednesday, February 16 at 2:00 p.m. with the online film premiere of Oxygen, a rapid-fire composition for twelve flutes created by filmmaker Jeremy Robins. Written during the pandemic and filmed in October 2021, Oxygen will debut on Carnegie Hall’s YouTube channel and features an all-star cast of flutists coming together to collaborate after more than a year of artistic isolation.

“I wrote Oxygen during the height of the pandemic,” Ms. Wolfe said. “I had begun the piece before COVID began, but then really dug in when my family went into isolation. The piece became my way of reaching out of the darkness, into the light. I was inspired by the folk cousins of the modern flute—penny whistles, panpipes, and wooden flutes—using breathy tones and tongue rams for earthy colors, and lightning speed scales for release. The twelve flutes include piccolos, alto flute, and bass flute along with the C flutes… and the propelling motion and syncopated rhythms and tunes require lots of air and agility. I am thrilled to kick off my Carnegie Hall residency with this beautiful Oxygen film featuring an amazing all-star cast of flutists coming from far and wide. Against all odds, and always with an eye to safety, we rehearsed, workshopped, recorded, and filmed. The collaborative experience with the entire team was remarkable,” she adds.

As a composer, Ms. Wolfe responds to the world around her, bringing unsung histories to life in riveting musical tableaux, with a focus on the multifaceted history of the American worker.

At the center of her Carnegie Hall series are three performances of her seminal works in Zankel Hall, beginning on Thursday, March 3 at 7:30 p.m. with Steel Hammer—her retelling of the “John Henry” classic. Based on hearsay, recollection, and tall tales, the piece—a 2014 Pulitzer Prize finalist—illuminates the timeless legend of human versus machine. It features exquisite vocal writing complemented by Appalachian folk instruments, such as wooden bones, mountain dulcimer, banjo, clapping, and clogging performed by Bang on a Can All-Stars, with vocalists Rebecca L. Hargrove, Sonya Headlam, and Molly Netter.

In an evening of all strings on Wednesday, April 13 at 7:30 p.m., Ensemble Signal performs Ms. Wolfe’s evocative tone poem Cruel Sister, a work directed by Brad Lubman that follows a haunting Scottish story of the love-rivalry between sisters. The concert also includes Weather One by Michael Gordon, who has been central in Wolfe’s artistic life, as well as her With a blue dress on for five singing violinists and featuring violinist Tessa Lark.

On Thursday, May 19 at 7:30 p.m., Ms. Wolfe’s Pulitzer Prize–winning Anthracite Fields draws on oral histories, interviews, speeches, and more to honor the people who persevered and endured in the Pennsylvania Anthracite coal region. Bang on a Can All-Stars returns to perform this “profound work” (Los Angeles Times) featuring The Choir of Trinity Wall Street, under the direction of Julian Wachner, with projection and scenic design by Jeff Sugg.

In addition, showcasing her work as a mentor to the next generation of artists and composers, Ms. Wolfe collaborates with Carnegie Hall’s Ensemble Connect this season, curating their Up Close concert in the Resnick Education Wing on Monday, May 2 at 7:30 p.m. The evening will feature the world premiere of the Carnegie Hall-commissioned Endless Landscape by Robert Honstein and an arrangement of A Kind of Lung by Shelley Washington, amongst other works. Up Close performances explore different approaches to presenting classical music by experimenting with concert formats, audience engagement, and multimedia to activate the performance space in exciting new ways.

Carnegie Hall Citywide: Asphalt Orchestra in Bryant Park
As one of the co-founders and artistic directors of the Bang on a Can new-music collective, Ms. Wolfe has championed the work of innovative composers worldwide.

An internationally celebrated composer, Julia Wolfe was the recipient of the Pulitzer Prize in 2015 and was awarded a MacArthur Fellowship in 2016. In 2019, the New York Philharmonic premiered Fire in my mouth, her large-scale work for orchestra and women’s chorus, continuing her interest in American labor history with the subject of women in New York’s garment industry at the turn of the century. Ms. Wolfe’s Her Story will tackle the subject of women and equality, scheduled to be premiered by a consortium of orchestras with women’s chamber choir Lorelei in the 2022-2023 season. She was a recipient of a 2015 Alpert Award in the Arts and was named the 2019 Composer of the Year by Musical America.

She received her bachelor’s degree from the Residential College at the University of Michigan, her master’s degree from the Yale School of Music, and her PhD from Princeton University. Julia Wolfe is co-founder/co-artistic director of New York’s legendary music collective Bang on a Can, and she is Artistic Director of NYU Steinhardt Music Composition.

Program to include the world premieres of Carnegie Hall commissions by Leila Adu, Jeffrey Brooks, and Kendall Williams

Lead support for Carnegie Hall Citywide is provided by the Howard Gilman Foundation.

Photo at top of release by Peter Serling

Tickets, priced at $20, for events held in Carnegie Hall’s Resnick Education Wing can be purchased exclusively by calling CarnegieCharge at 212-247-7800 or by visiting the Carnegie Hall website, carnegiehall.org.

Please note: to support a safe reopening for in-person events and in accordance with the advice of medical and public health experts, all artists, visitors, and staff will be required to show proof of full vaccination against COVID19 with a vaccine approved by the World Health Organization (WHO) in order to enter Carnegie Hall. As of February 14, 2022, everyone coming to Carnegie Hall will be required to show proof of full vaccination as well as proof that they are fully up-to-date on CDC-recommended boosters, based on their eligibility. While inside Carnegie Hall, all guests must wear a properly fitting mask over their nose and mouth except when eating or drinking in designated areas.