The Black Angel of History: Myth-Science, Metamodernism, and The Metaverse Special Exhibition Analyzing Visual Culture and Technology Within the Genre of Afrofuturism Now on Display in Carnegie Hall's Zankel Gallery Through June 16, 2022 and Online Through a Partnership with Google Arts & Culture 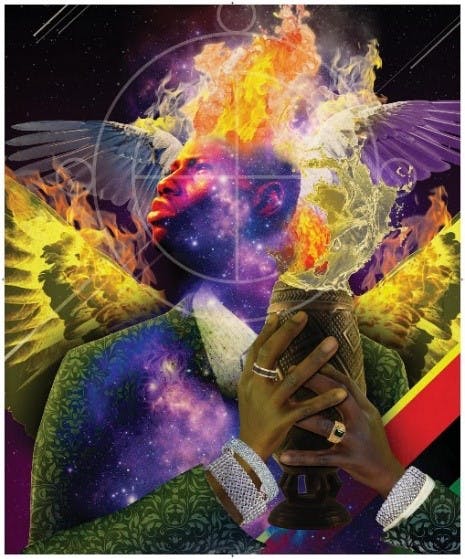 (March 1, 2022; NEW YORK, NY)—The Black Angel of History: Myth-Science, Metamodernism, and the Metaverse, a special exhibition that analyzes visual culture and technology within the genre of Afrofuturism, is now on display in Carnegie Hall’s Zankel Hall Gallery as part of the Hall’s citywide Afrofuturism festival. Admission is free and open to Zankel Hall concertgoers through June 16. The exhibit is also available online to viewers around the world through a partnership with Google Arts & Culture as part of their new online hub: The Afrofuture is Now.

Curated by Reynaldo Anderson and the Black Speculative Arts Movement, The Black Angel of History exhibit embodies the Afro-Speculative, examining the power that creativity wields in the struggle for various freedoms of expression and the politics of resistance. Showcasing illustrations, graphic design, video, literature, and mixed-media digital and analog works, the exhibit features emerging, mid-career, and acclaimed artists, writers, performers, and designers.

The Black Angel of History exhibition continues the visual exploration of complex narratives on the Black or African speculative imagination that began with the previous groundbreaking Unveiling Visions: The Alchemy of the Black Imagination multimedia visual arts exhibition at the Schomburg Center for Research in Black Culture in fall 2015, a collection that evolved the possibilities of the visual Afrofuturism genre.

“The spirit of The Black Angel of History is the herald of a new generation maturing in this century embracing Afrofuturism,” said Reynaldo Anderson, the exhibit curator and one of the members the Afrofuturism Curatorial Council brought together by Carnegie Hall to help shape the festival’s line-up of events. “Afrofuturism is an emerging philosophy that enables people of African descent to culturally locate themselves in time and space with agency; it’s influenced by legacy artists like Sun Ra, Greg Tate, and others, and now represented by The Black Speculative Arts Movement and artists like Flying Lotus and Zaika dos Santos [who are featured as part of the festival].”

The exhibit—on display on the Parterre and Mezzanine lobby levels of Zankel Hall—showcases 36 artworks and five videos by 23 Afrofuturist artists, with more than half of the works commissioned specifically for this exhibition. The online version of The Black Angel of History is part of Google Arts & Culture’s The Afrofuture is Now hub, which also enables viewers to explore AstroSankofa, the Afrofuturism festival’s signature artwork by Quentin VerCetty—commissioned by Carnegie Hall—in addition to Afrofuturism in Black Music (the latest chapter from the Hall’s Timeline of African American Music).

“I started doing Afrofuturist imagery within the mediums of sequential art (comics) and entertainment concept design at the age of 12,” said Tim Fielder. “I am now in my mid-50s. This singular focus has been driven by my compulsion to show characters of color existing with agency at the intersection of science fiction, fantasy, and race modalities, where they traditionally have not been. It is surreal to see the world has finally caught up. The Black Angel of History —like with my career retrospective, Black Metropolis [currently on view at The Children’s Art Carnival]—proudly showcases this Afrofuturist moment.”

Also on display is OPEN MIND—which began as a black and white self-portrait and was transformed through photomanipulation and digital painting—by surrealist digital artist and photographer Sunahtah Jones (Spice Cam Visuals). It is the first of the artist’s SUBCONSCIOUS GALAXY collection, and is an explosion of Sunahtah’s mind into parts of a galaxy symbolizing the depth, vastness, and complexity of the human mind and thought; In addition, concertgoers can view Metasphere by Memphis-born, Los Angeles-based Jessi Jumanji who explores the many dimensions of Afrofuturism through digital collage and painting, celebrating the essence of Africa from antiquity to contemporary generations illustrating the Motherland reconciled with her past and optimistic for the future; The Black Angel of History, OutKast, God Forbid, and Earth Seed by Arthur Schomburg Fellow and celebrated multimedia artist Stacey Robinson; and Conscience—a place of historical, social and cultural identification that connects the past, the present and transports us to the future to the ancestry of tomorrow—by Brazilian visual artist and singer Zaika dos Santos. Also featured is her video work, Nyansapo, the Adinkra of knowledge who falls from her ship on an unknown planet and in an attempt to return she undergoes an immersive search for her bodily, scientific, sound, and technological consciousness.

For the complete schedule of programming for the Afrofuturism festival in February-March 2022 visit carnegiehall.org/afrofuturism.

Support for the exhibit is provided by the Helen Frankenthaler Foundation.

Support for Afrofuturism is provided by the Howard Gilman Foundation and Bank of America.

This project is supported in part by an award from the National Endowment for the Arts.

The Black Angel of History by Stacey Robinson, 2021, new cover of INFINITUM: An Afrofuturist Tale by Tim Fielder, Sun Ra: Mythscientist, 2021 by John Jennings, and Conscience by Zaika dos Santos, 2021.