Carnegie Hall Presents
Across the Stars:
The Music of John Williams,
A One-Night-Only Benefit
Concert on Thursday, April 21 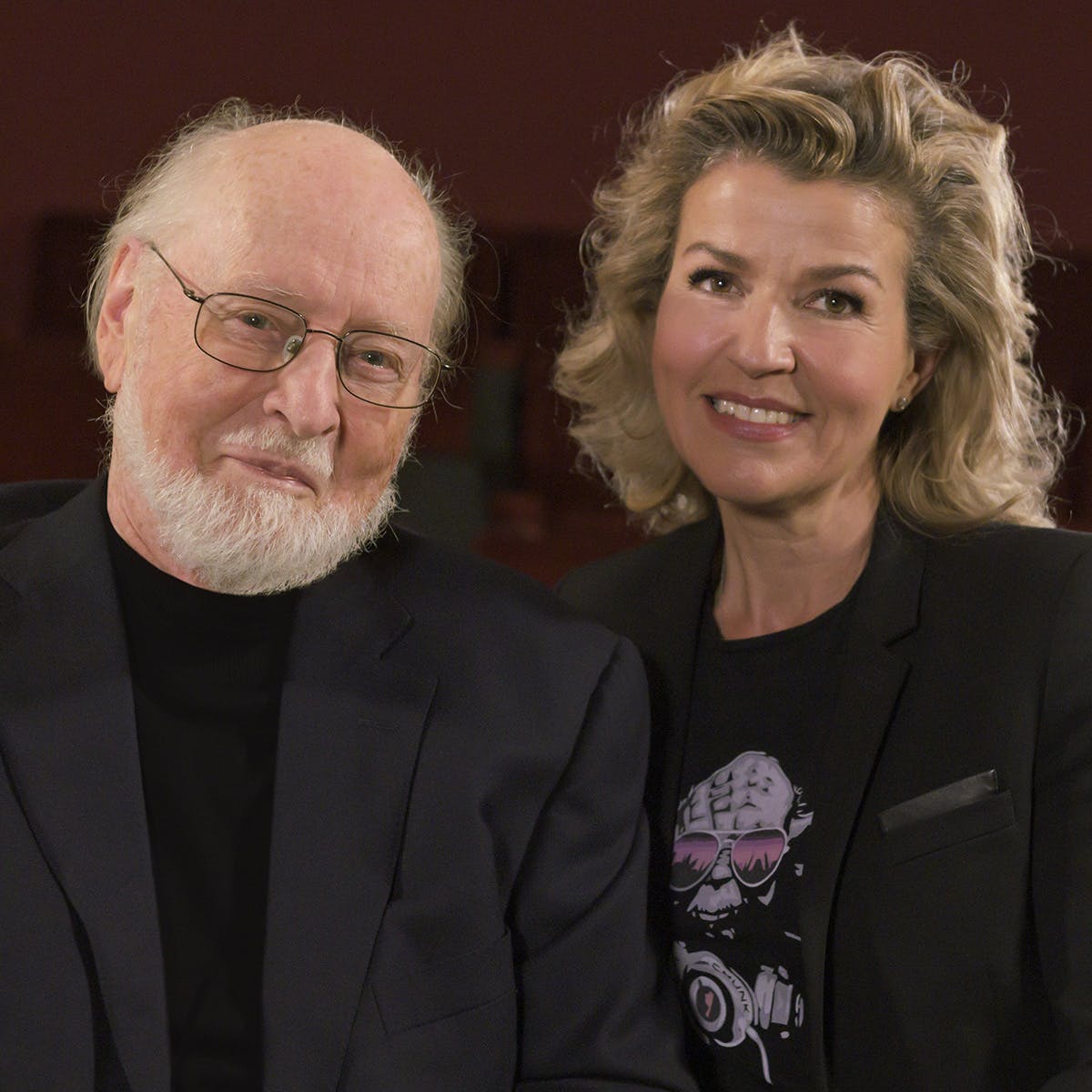 (New York, NY, March 31, 2022)—Carnegie Hall presents renowned conductor-composer John Williams, celebrated violinist Anne-Sophie Mutter, and the legendary Philadelphia Orchestra in Across The Stars: The Music of John Williams, a one-night-only gala performance on Thursday, April 21 at 7:00 p.m. The evening’s program will feature selections from Williams’s beloved Hollywood film scores, including "Flight to Neverland" from Hook, excerpts from Close Encounters of the Third Kind, "Donnybrook Fair" from Far & Away, the theme from Cinderella Liberty, Hedwig’s Theme from Harry Potter, and "Throne Room" and Finale from Star Wars Episode IV: A New Hope. Also on the program is Williams’s "Sound the Bells!" and the New York premiere of his new violin concerto written especially for Ms. Mutter.

In 2019, Deutsche Grammophon released the critically acclaimed album Across the Stars, an anthology of cinematic themes by John Williams, specifically rewritten for Anne-Sophie Mutter and recorded in Los Angeles at Hollywood’s Sony Pictures Scoring Stage with the Recording Arts Orchestra of Los Angeles. Williams and Mutter have since reunited onstage in Vienna with the Vienna Philharmonic, and at Tanglewood with the Boston Pops, delighting audiences with these special arrangements. Williams’s new Violin Concerto No. 2 received its world premiere at Tanglewood in July 2021.

The Across the Stars gala benefits Carnegie Hall’s artistic and education programs. Mercedes T. Bass, Diane von Furstenberg and Barry Diller, George Lucas, Yo-Yo Ma, Elizabeth Segerstrom, Hope and Robert F. Smith, Steven Spielberg, and Barbra Streisand are Honorary Chairs for this special event. Benefit tickets include prime seating for the concert and entry to either the pre-concert cocktail party ($1,000) in Carnegie Hall’s Rohatyn Room or the post-concert gala dinner with the artists (starting at $2,500) in the Weill Music Room, or both (starting at $5,000). John Williams will be the Guest of Honor at the gala dinner. Tables for groups of eight or 10 are available starting at $25,000. Benefit tickets are available by calling Carnegie Hall’s Special Events office at 212-903-9679 or online at carnegiehall.org/AcrossTheStars.

A limited number of concert-only tickets, priced $80–$265, are available at the Carnegie Hall Box Office, by calling CarnegieCharge at 212-247-7800, or online at carnegiehall.org.

This special performance will also be heard live by music lovers around the globe as part of the Carnegie Hall Live radio broadcast and digital series. Produced by WQXR and Carnegie Hall and hosted by WQXR’s Jeff Spurgeon and New Sounds’s John Schaefer, the concert will be broadcast by WQXR 105.9 FM in New York, streamed on wqxr.org and carnegiehall.org/wqxr.

About The Artists
Anne-Sophie Mutter is a musical phenomenon: for 46 years, the virtuoso violinist has been a fixture in all the world’s major concert halls, making her mark on the classical music scene as a soloist, chamber musician, and mentor. The four-time Grammy® Award winner is equally committed to the performance of established repertoire as to the future of music—to date, she has presented the world premieres of 30 works by composers including Unsuk Chin, Sebastian Currier, Henri Dutilleux, Sofia Gubaidulina, Witold Lutosławski, Norbert Moret, Krzysztof Penderecki, Sir André Previn, Wolfgang Rihm, Jörg Widmann and John Williams, each of whom have composed music especially for her. Ms. Mutter also dedicates herself to supporting young musicians and numerous benefit projects. Most recently, the board of trustees of the German cancer charity “Deutsche Krebshilfe” elected her the new president of the non-profit organization in 2021. Starting in January 2022, she joined the foundation board of the Lucerne Festival. In 1997, she founded the “Association of Friends of the Anne-Sophie Mutter Foundation e.V.,” to which the Anne-Sophie Mutter Foundation was added in 2008. These two charitable institutions provide support for the scholarship recipients which is tailored to the musical fellows’ individual needs. Since 2011, Anne-Sophie Mutter has regularly shared the spotlight on stage with her ensemble of fellows, “Mutter’s Virtuosi.”

In a career that spans five decades, John Williams has become one of America’s most accomplished and successful composers for film and for the concert stage. He has served as music director and laureate conductor of one of the country’s treasured musical institutions, the Boston Pops Orchestra, and he maintains thriving artistic relationships with many of the world’s great orchestras, including the Boston Symphony Orchestra, New York Philharmonic, Chicago Symphony Orchestra, and the Los Angeles Philharmonic. Mr. Williams has received a variety of prestigious awards, including the National Medal of Arts, the Kennedy Center Honor, the Olympic Order, and numerous Academy Awards, Grammy Awards, Emmy Awards, and Golden Globe Awards. He remains one of our nation’s most distinguished and contributive musical voices.

Mr. Williams has composed the music and served as music director for more than one hundred films. His 40-year artistic partnership with director Steven Spielberg has resulted in many of Hollywood’s most acclaimed and successful films. Mr. Williams has composed the scores for all seven Star Wars films, the first three Harry Potter films, Superman: The Movie, JFK, Born on the Fourth of July, Memoirs of a Geisha, Far and Away, The Accidental Tourist, Home Alone, Nixon, The Patriot, Angela’s Ashes, Seven Years in Tibet, The Witches of Eastwick, Rosewood, Sleepers, Sabrina, Presumed Innocent, The Cowboys, and The Reivers, among many others. He has worked with many other legendary directors, including Alfred Hitchcock, William Wyler, and Robert Altman. In 1971, he adapted the score for the film version of Fiddler on the Roof, for which he composed original violin cadenzas for renowned virtuoso Isaac Stern. He has appeared on recordings as pianist and conductor with Itzhak Perlman, Joshua Bell, Jessye Norman, and others.

In addition to his activity in film and television, Mr. Williams has composed numerous works for the concert stage, among them two symphonies and concertos for flute, violin, clarinet, viola, oboe, and tuba. His cello concerto was commissioned by the Boston Symphony Orchestra and premiered by Yo-Yo Ma at Tanglewood in 1994. Mr. Williams also has filled commissions by several of the world’s leading orchestras, including a bassoon concerto for the New York Philharmonic entitled The Five Sacred Trees, a trumpet concerto for The Cleveland Orchestra, and a horn concerto for the Chicago Symphony Orchestra. Seven for Luck, a seven-piece song cycle for soprano and orchestra based on the texts of former U.S. Poet Laureate Rita Dove, was premiered by the Boston Symphony at Tanglewood in 1998. At the opening concert of Carnegie Hall’s 2009–2010 season, Daniele Gatti led the Boston Symphony Orchestra in Mr. Williams’s On Willows and Birches, a concerto for harp and orchestra.

In January 1980, Mr. Williams was named the nineteenth music director of the Boston Pops Orchestra, succeeding the legendary Arthur Fiedler. He currently holds the title of Boston Pops Laureate Conductor which he assumed following his retirement in December 1993, after 14 highly successful seasons. He also holds the title of Artist-in-Residence at Tanglewood. Williams made his Carnegie Hall debut conducting the Boston Pops in 1980 and has since returned an additional five times, most recently in 2006. His music has been performed on more than 100 events at Carnegie Hall over the past 40 years.

Through concerts, tours, residencies, and recordings, the Orchestra is a global ambassador for Philadelphia and the United States. It performs annually at Carnegie Hall, the Saratoga Performing Arts Center in New York—a venue that was built for the Orchestra—and the Bravo! Vail Music Festival. The Orchestra began touring in the earliest days of its founding. It was the first American orchestra to perform in the People’s Republic of China in 1973, launching a now five decade-commitment of people-to-people exchange. Today, the orchestra has multi-year partnerships with the National Centre for the Performing Arts in Beijing, the Shanghai Media Group, ShanghaiTech University, and the Shanghai Philharmonic.

As part of its commitment to bringing classical music to audiences wherever they may be, the Orchestra returned to recording under Mr. Nézet-Séguin’s leadership with a CD on the prestigious Deutsche Grammophon label of Stravinsky’s The Rite of Spring and Leopold Stokowski transcriptions of works by Bach and Stravinsky. To date, there have been an additional ten releases, including Rachmaninoff’s Rhapsody on a Theme of Paganini and all four piano concertos with pianist Daniil Trifonov, Bernstein’s MASS, Mahler’s Symphony No. 8, and Florence Price’s First and Third symphonies. These continue the Orchestra’s remarkable history in this area, having made its first recording in 1917 and amassing an enormous discography in the intervening years.

In March 2020, in response to the cancellation of concerts due the COVID-19 pandemic, the Orchestra launched the Virtual Philadelphia Orchestra, a portal hosting video and audio of performances, free, on its website and social media platforms. In September 2020 the Orchestra announced Our World NOW, its reimagined season of concerts filmed without audiences and presented on its Digital Stage. The Orchestra also inaugurated free offerings: HearTOGETHER, a series on racial and social justice; educational activities; and small ensemble performances from locations throughout the Philadelphia region.

Gala Benefit tickets—priced at $50,000; $25,000; $5,000; and $2,500—include concert seating and the post-concert dinner in the Weill Music Room. Tickets priced at $1,000 include the concert and a pre-concert cocktail reception at 6:00 p.m. in Carnegie Hall’s Rohatyn Room. All gala benefit tickets are available by contacting the Carnegie Hall Special Events office at SpecialEvents@carnegiehall.org or online at carnegiehall.org.

A limited number of concert-only tickets—priced at $80–$265—are available at the Carnegie Hall Box Office, 154 West 57th Street, or can be charged to major credit cards by calling CarnegieCharge at 212-247-7800 or by visiting the Carnegie Hall website, carnegiehall.org.

For all Carnegie Hall presentations in Stern Auditorium / Perelman Stage a limited number of partial view (seats with obstructed or limited sight lines or restricted leg room) will be sold for 50% of the full price. For more information on this and other discount ticket programs, including those for students, Notables members, and Bank of America customers, visit carnegiehall.org/discounts. Artists, programs, and prices are subject to change.

Please note: To support a safe reopening for in-person events and in accordance with the advice of medical and public health experts, everyone entering Carnegie Hall this season will be required to show proof of full vaccination against COVID-19 with a vaccine approved by the World Health Organization (WHO). In addition, everyone on Carnegie Hall’s premises will be required to wear a properly fitting mask over the nose and mouth at all times.