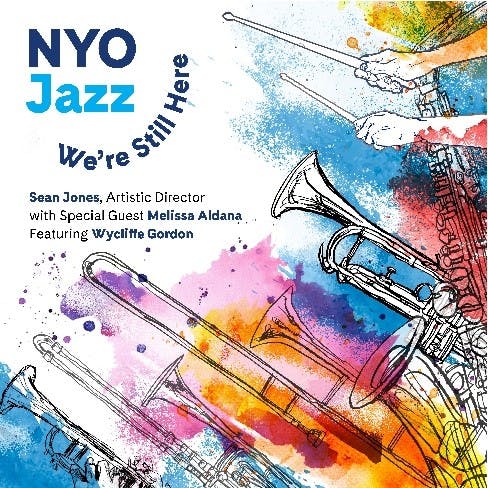 (April 28, 2022; NEW YORK, NY)—Carnegie Hall today announced the release of NYO Jazz’s first full-length studio album, We’re Still Here, featuring Artistic Director and Bandleader/trumpeter Sean Jones and special guest Melissa Aldana on tenor saxophone, plus an appearance by trombonist Wycliffe Gordon, available on June 24, 2022. The album will be released by Platoon and will be available for digital download and on all streaming platforms in standard and Dolby Atmos Spatial Audio formats. The album is available for pre-order here.

One of Carnegie Hall’s three acclaimed national youth ensembles, NYO Jazz—comprising outstanding young musicians ages 16–19 from across the United States—showcases the legacy and bright future of American jazz. Created in 2018 by the Hall's Weill Music Institute, NYO Jazz annually brings together some of the nation’s finest teen jazz musicians to train, perform, and tour with world-class jazz masters while also serving as music ambassadors for their country.

“You close your eyes and think they’re all 20 years older than they are,” said Sean Jones who pays it forward through his passionate leadership of NYO Jazz, carrying on the tradition of mentorship in jazz.

We’re Still Here features four new works written for the band since its inception, a range of classic and contemporary charts that are hallmarks of its live concerts, and works exploring themes that include social justice, resilience, and the power of music to spark joy. The four Carnegie Hall-commissioned works on the album are: “Run with Jones” by Miguel Zenón, featuring Melissa Aldana as soloist; “Mr. Jones and Co.” by Ayn Inserto, featuring Sean Jones as soloist; “Fête dans la Tête” by John Beasley; and “RPM’s” by Igmar Thomas. In addition to these commissions, among the album highlights include: “We’re Still Here” by—and featuring—trombonist and NYO Jazz faculty member Wycliffe Gordon, which has become the band’s rousing encore theme song; hence, the album’s title; “The Art of War” by Ralph Peterson; “Oyelo” by Miguel Zenón, featuring Melissa Aldana as soloist; “A Taste of Honey” by Duke Pearson; “Mr. Gentle and Mr. Cool” by Duke Ellington, arranged by NYO Jazz ensemble coach Reginald Thomas; and “Transitions” by Sean Jones.

The album—recorded during the ensemble’s summer 2021 training residency at Purchase College, State University of New York, amidst the COVID-19 pandemic—is a declaration of resilience and longevity. A summer that began with the disappointment of a year without touring evolved into the opportunity to create this 97-minute showcase of the incredible artistry and enormous versatility of this remarkable ensemble, a recording poised to reach audiences around the world just as the ensemble resumes touring this summer 2022 (US tour dates to be announced this spring).

“We’re thrilled for NYO Jazz to release its debut album this spring—the first recording by any of our national youth ensembles,” said Sarah Johnson, Chief Education Officer and Director of Carnegie Hall’s Weill Music Institute. “It’s a tremendous opportunity for these gifted young players to train, perform, and now record alongside some of today’s leading jazz artists including special guest Melissa Aldana. It was especially meaningful for the musicians to gather for an extended residency last summer as it marked the first time many of them had the opportunity to come together to play in a full ensemble since the start of the pandemic. With We’re Still Here, we are proud to showcase the incredible depth of talent and high level of musicianship of these standout jazz musicians from across the country who will help ensure one of America’s quintessential art forms is preserved for generations to come.”

“The big band has always been America’s orchestral format and one of the most wide-ranging ensembles ever devised,” said Jones, NYO Jazz’s Artistic Director and Bandleader. “It can convey nearly any style of music in a sonically stimulating and interactive way. This recording exhibits that diversity by placing classics by Duke Ellington and Neil Hefti alongside pieces that utilize the big band as a vehicle for contemporary American music and represent a wide variety of genres.”

This summer, NYO Jazz embarks on its first-ever US tour after performing at Carnegie Hall on July 28, 2022, with special guest vocalist Jazzmeia Horn. It follows successful international tours by NYO Jazz including a 2018 inaugural European tour with Dianne Reeves as special guest, and the ensemble’s debut tour to Asia in 2019 with Kurt Elling as special guest. Although NYO Jazz was unable to travel during the past two years, the musicians convened virtually during the summer of 2020 and at Purchase College, just north of New York City, in summer 2021, rehearsing and recording a wide range of repertoire, including this debut album.

“Making this album was an absolute labor of love for the musicians, our incredible faculty and guest artists, and everyone involved,” said Joanna Massey, Director of Learning & Engagement Programs for Carnegie Hall’s Weill Music Institute, who has worked with the NYO Jazz program since its inception. “From their individual preparation prior to coming together as an ensemble, through long days of rehearsals and then recording sessions, the musicians were unwavering and inspiring in their dedication to producing something meaningful for the world to hear. It’s particularly special that by recording all of the original music written especially for NYO Jazz, the album also pays tribute to the outstanding musicians from previous NYO Jazz ensembles—who, like the players heard here, embody the future of jazz.”

About NYO Jazz
Each summer, NYO Jazz, led by artistic director Sean Jones, shines a spotlight on the depth of talent found among teen jazz players across the United States. The program offers talented young musicians, ages 16-19, the opportunity to perform as cultural ambassadors for their country, sharing a uniquely American musical genre with people around the world through an international tour. The members of NYO Jazz have been recognized by Carnegie Hall as being among the finest jazz musicians in the country, following a rigorous and highly competitive audition process. After its Carnegie Hall debut in 2018, the ensemble embarked on its first-ever international tour for performances with vocalist Dianne Reeves at prestigious concert halls and music festivals in London, Amsterdam, Edinburgh, Kassel, and Berlin. In summer 2019, NYO Jazz made its debut tour to Asia, joined by vocalist Kurt Elling, including performances in Taichung, Beijing, Shanghai, Zhuhai, and Hong Kong. As part of their travel schedule, NYO Jazz musicians also have opportunities to meet and collaborate with young local musicians and experience the richness of different cultures and music.

NYO Jazz builds on the success of the acclaimed National Youth Orchestra of the United States of America (NYO-USA) and its sister ensemble for younger musicians NYO2—programs created by Carnegie Hall in 2013 and 2016, respectively—to bring together the finest young classical musicians from across the country each summer for training, performances and international touring. Each of these prestigious national programs—free to all participants—is dedicated to the proposition that talented young musicians thrive when they have the opportunity to expand their musical, social, and cultural horizons and share their artistry with audiences around the globe. Since 2013, Carnegie Hall’s national youth ensembles have performed in 15 countries on four continents, including tours to China, South Korea, Mexico, Ecuador, Colombia, Russia, and across Europe.

What the Press Have Said About NYO Jazz
“The NYO Jazz ensemble, stocked with ambitious young players under the leadership of the trumpeter Sean Jones, tackles an intriguing program.” —The New Yorker

“This teenage big band … was more than capable of responding with real bravura to the uncompromising improvisational challenges of seasoned players.” — The Scotsman

“Young jazz musicians from the US wow audiences across the country.” — China Daily


For Press Listening Only: Click here for a private Soundcloud link to listen to three tunes from the album.

* For digital release only

Major support has been provided by the Doris Duke Charitable Foundation and Clive and Anya Gillinson, Sarah Billinghurst Solomon and Howard Solomon, and Joyce and George Wein Foundation, Inc.

Additional support has been provided by Sarah Arison, and Bank of America.


Image at top of release by Chris Lee