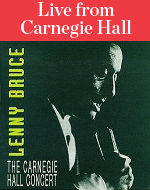 Artist: Lenny Bruce
Album: The Carnegie Hall Concert
Label: Blue Note Records
Date Recorded: February 4, 1961
Fun Fact: Although this recording—originally released as a three-record set—represents the entire February 4, 1961 concert, the original release featured only 40 minutes of the show. The photo on this cover—from a reissue—was not even taken at Carnegie Hall.

As in 2011, New York saw a snow-blanketed beginning to February 1961. At the pinnacle of his creative and comedic powers—but not yet at the peak of his fame (or infamy)—Lenny Bruce was scheduled to perform a midnight concert at Carnegie Hall on February 4.

His biographer, Albert Goldman, relates that Bruce—who had taken two days to make his way north through the storm from Miami—wondered if anyone would show up. They did. Nearly 3,000 people braved a couple feet of snow, a blizzard, and a driving ban to witness Bruce rattle and riff through two hours of his best material and flights of improvised comedic fantasy. His targets included "The Airlines," "Klu Klux Klan," the "Kennedy Acceptance Speech," "The Flag," "Christ & Moses," the "Judge Saperstein Decision," and "The Joke".

Just five years later, Bruce was dead. Half a century after it was captured, this recording remains a valuable legacy of an American countercultural icon at his best.