As the anniversary of her death on July 17, 1959, nears, the star of this week's Live from Carnegie Hall is legendary jazz singer and songwriter Billie Holiday.

By the mid-1950s, Billie Holiday's lifestyle was taking a toll on her health—she died from liver disease less than three years after this recording was made—but that was not evident to the audience the night this album was recorded. Interspersed with the songs—which included "Lady Sings the Blues," "Ain't Nobody's Business If I Do," and "My Man"—The New York Times Gilbert Millstein read excerpts from Holliday's recently published autobiography.

In the album liner notes, Millstein relates that it "was evident, even then, that Miss Holiday was ill. I was shocked at her physical weakness. Her rehearsal had been desultory; her voice sounded tinny and trailed off; her body sagged tiredly. But I will not forget the metamorphosis that night. She was erect and beautiful; poised and smiling. And when the first section of narration was ended, she sang—with strength undiminished—with all of the art that was hers."

Joined on stage by some of the top jazz musicians of the day—including Roy Eldridge, Coleman Hawkins, and Kenny Burrell—The New York Times reported that Holiday "sang with assurance, with warmth and with a wonderfully expressive artistry," and that the readings made the songs more meaningful, even for those who were very well acquainted with her music.

Nat Hentoff of DownBeat commented that it "was a night when Billie was on top, undeniably the best and most honest jazz singer alive." 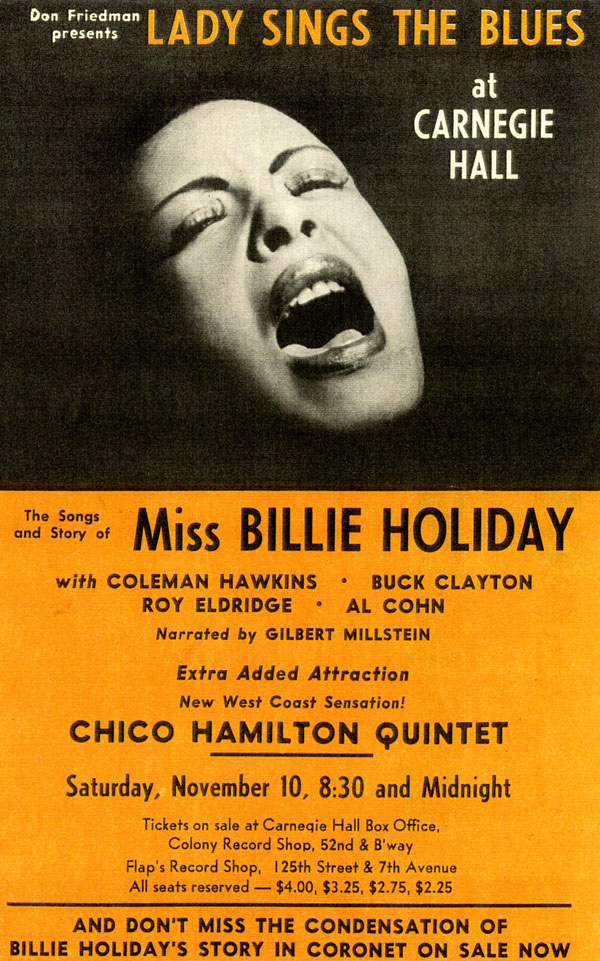 Flyer for the November 1956 concerts, which led to the live album. Courtesy of the Carnegie Hall Archives.