Sixty-five years ago this month, Carnegie Hall was transformed into a Hollywood movie set when production began on the United Artists film Carnegie Hall. The first feature film to be made entirely in New York City in nearly 10 years, Carnegie Hall was also the first movie ever recorded with 12-track stereophonic sound.

Mayor William O’Dwyer kicked things off on August 5, 1946, and director Edgar G. Ulmer concluded filming on October 17. Shot at Carnegie Hall and Fox Movietone News studios at 54th Street and 10th Avenue, the picture cost $1.7 million to produce—nearly $200,000 over budget, including $25,000 spent striking and replacing sets and production equipment to accommodate previously scheduled performances in the Hall, which began September 20.

Except for its musical performances, Carnegie Hall is usually dismissed as a trite flop. But once you dig a bit deeper into its background, for all its flaws you find not only a remarkable time-capsule—at the time, few people thought to put classical music performances on film—but also a trove of fascinating connections and backstories. These start at the very top of the credits with producers William LeBaron and Boris Morros. LeBaron’s show-business career stretched back to 1911, when he was the writer-lyricist of A La Broadway, a burlesque musical revue that featured an 18-year-old Mae West as an Irish maid in her first legitimate Broadway role. Carnegie Hall, with an Irish cleaning woman as its central character, made for a fitting bookend as his final producer’s credit.

Yet things get truly interesting with Boris Morros. Born in St. Petersburg in 1891, Morros came to America in 1922 and soon became music director at Paramount Pictures. Using his family in Russia as bait, the KGB recruited him as a spy in the mid-1930s. When he was confronted by the FBI in 1947—shortly after the release of Carnegie Hall—Morros admitted his involvement with the KGB and agreed to act as a double agent. He wrote of his exploits in a 1959 book, My Ten Years as a Counterspy, which became the basis for the 1960 spy thriller Man on a String, starring Ernest Borgnine.

At least Morros’s espionage tale had a happy ending—and a basis in fact. Carnegie Hall star Marsha Hunt’s championship of liberal causes—and refusal to apologize for it—resulted in her being blacklisted by Hollywood in the early 1950s, effectively ending her film career (even though she was never called before the infamous House Un-American Activities Committee, where a refusal to “name names” became the usual path to Hollywood exile).

Another oddity of the film is the “dramatic” performances by Jascha Heifetz, Fritz Reiner, and Walter Damrosch, who were asked to deliver several lines in an attempt to connect the fictional and musical sides of the story. But the scene between the 84-year-old Damrosch and an aging Nora—where they both talk about how they were there at Carnegie Hall’s beginning in 1891—is deeply touching, in a way, considering Damrosch really was there!

Ulmer’s stylishly dark touches are all over the film, such as in the sequence that features cellist Gregor Piatigorsky performing Saint-Saëns’s The Swan with six harpists. Although Piatigorsky claimed to have hated that scene, it is a striking setting, very atmospheric with its sharp shadows. Other moments like this include the dramatic staging of Arthur Rubinstein’s solo sequence—complete with overhead shots—and Leopold Stokowski’s wild crown of hair angelically framed in the Hall’s ring of ceiling lights—like a halo, strikingly shot at a sharp angle from below.

Click on the image below to open a slideshow of images related to the film. 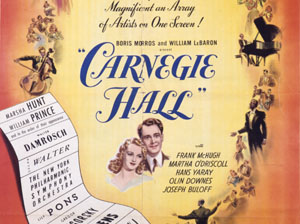